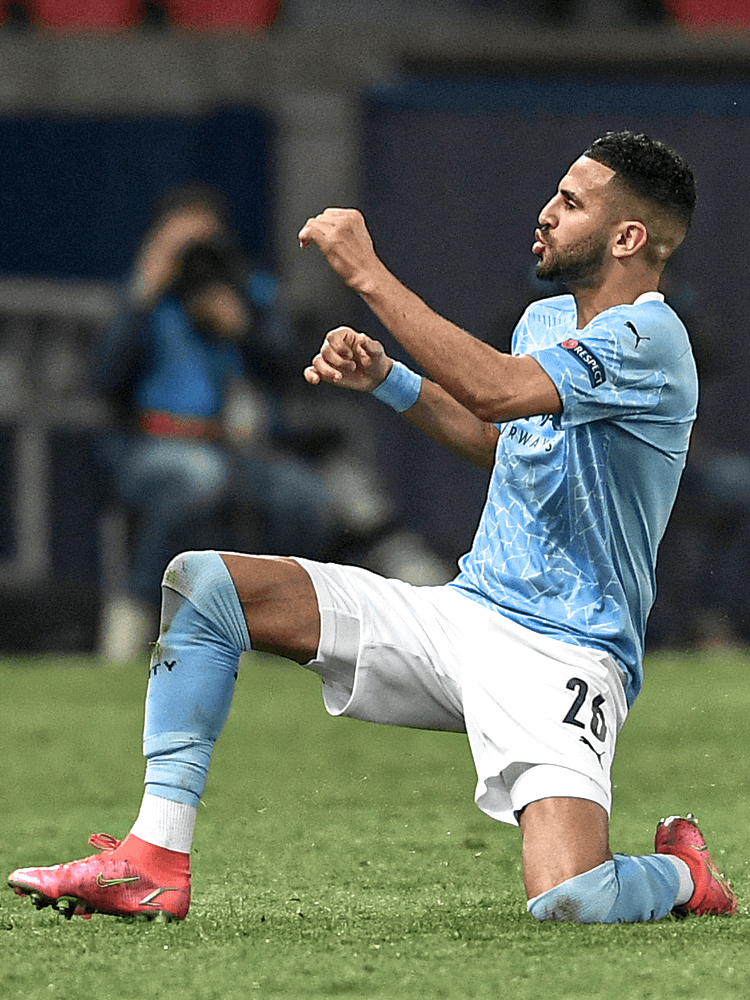 Manchester City moved to the verge of reaching their first Champions League final by building a one-goal advantage ahead of the second leg of their final four encounter with Paris Saint-Germain. Impressively recovering from a goal down at half-time, after which Kevin De Bruyne and Riyad Mahrez struck to overcome Marquinhos' earlier finish, they were one up by the time Idrissa Gueye was sent off in the 77th minute for fouling Ilkay Gündogan. Their manager Pep Guardiola, who twice won the same competition with Barcelona, said: "We changed a little in the way we press. We were passive (earlier on). Then we were more aggressive. Afterwards we found goals and could have scored another. I'm so satisfied with the performance but we're only halfway. There are 90 more minutes. Anything can happen." His respected opposite number Mauricio Pochettino said: "We deserved to be ahead but they were better than us and dominated the second half. The two goals were accidents, but they created more than us. It was one half for each team."

Paris Saint-Germain were organised by their manager Mauricio Pochettino into a 4-2-3-1 formation led by Kylian Mbappé. Their opponents, Manchester City, defended with a 4-2-4.

City pressed with that same shape, via Riyad Mahrez and Phil Foden targeting the outside shoulder of their opposing full-back in an attempt to force possession infield, where Kevin De Bruyne, Bernardo Silva, Rodri and Ilkay Gündogan combined to form a ring around PSG's midfield. In turn, Leandro Paredes withdrew into central defence to form a back three, and Marco Verratti and Ángel Di María moved into the half-spaces as Alessandro Florenzi and Mitchel Bakker advanced from full-back, ensuring PSG's shape resembled a 3-3-3-1 as they did so.

The visitors' aggressive pressure troubled the hosts, because it led to regains in advanced territory and therefore counters, but it also involved an element of risk, because their willingness to commit numbers to a smaller area meant that there were times they were open against a quality opponent who proved capable of taking advantage to create attacks. PSG's opening goal came from a set-piece, when they blocked City's two near-post zonal defenders to prevent them from attacking the ball, and then capitalised on the mismatch that existed between Marquinhos and Gündogan, who struggled to block the defender's run.

PSG consistently offered runners in behind – Mbappé, particularly, regularly sought to make runs of that nature. City's goalkeeper Ederson typically retained his high starting position, and used it to attempt to sweep up behind their defensive line when balls were played over the top. Against PSG's ongoing attempts to build in the second half, City's pressing structure changed to become a 4-4-2 in which De Bruyne and Silva worked to encourage their opposing central defenders wide and Foden and Mahrez adopted narrower starting positions to prevent passes being played into Verratti and Di María, who continued to target the half-spaces while remaining willing to press their opposing full-back.

The relevant PSG central defender, full-back, central midfielder and wide forward also combined to create a diamond in which the full-back and wide forward offered contrasting movements as in-to-out passes were played to eliminate Foden or Mahrez. City's increasing grasp of possession frustrated Pochettino's team, however, and City built on that by increasing the intensity and height of their press. After Idrissa Gueye's red card, PSG reorganised to form a 4-3-2 led by Mbappé and Neymar, and to focus on potential counters.

Manchester City manager Pep Guardiola on this occasion favoured a 4-2-4 formation built on the double pivot provided by Ilkay Gündogan and Rodri. Their opponents, Paris Saint-Germain, defended with a 4-4-2 led by Neymar and Kylian Mbappé.

As City sought to build play, Kevin De Bruyne and Bernando Silva moved to form a box with Rodri and Gündogan, encouraging Riyad Mahrez and Phil Foden to remain high and wide, to control the centre of the pitch and create one-on-ones for their wide players. PSG mostly used a mid-block and were content for City to have possession in front of that block.

Their compactness between their defensive and midfield lines frustrated City thoughout the first half; Leandro Paredes and Idrissa Gueye were as effective at tracking runners when City attempted to advance with width as they were at adjusting to move and press in the centre of the pitch if City moved the ball back infield. Marco Verratti and Ángel Di María also worked to recover their defensive positions and prevent City from beating them in the wide areas.

For all that PSG's defence impressed, however, City's struggles to create also owed to their cautious positioning. They attempted to keep both full-backs, central defenders and central midfielders in defensive-minded positions, and therefore relied on their front four to create goalscoring chances against PSG's rigid defensive structure. Towards the end of the first half, when they were a goal down, either Gündogan or João Cancelo sought to advance to provide an additional figure when they attacked, which meant City moving the ball slightly quicker and being able to combine through tighter spaces, but they continued to offer too few runs in behind. Each of their front four regularly moved to receive to feet; Foden, who also occasionally moved to receive outside of Alessandro Florenzi, was the one who offered greater variety.

City adjusted to offer five points of attack during the second half, often via Kyle Walker advancing. Their previous caution owed to their awareness of the significant counter-attacking threat posed by Neymar and Mbappé; their increased ambition was rewarded, however. A short corner, won because of a run from Walker, was followed by their equalising goal; their second came from a direct free-kick that was confronted by a poor defensive wall in which Paredes and Presnel Kimpembe allowed the ball to be played between them.

After Gueye's red card, City attempted to overload the right side of the pitch, via De Bruyne, Walker and Mahrez adopting positions outside of PSG's midfield three. City worked possession towards the left before switching it, via a diagonal pass, to one of those three. They increasingly assumed control, and therefore appeared more threatening in the final third, where they offered forward runs off the ball and quicker movements in possession. For all that their goals owed to set-pieces, those set-pieces came from their increased momentum and positivity.