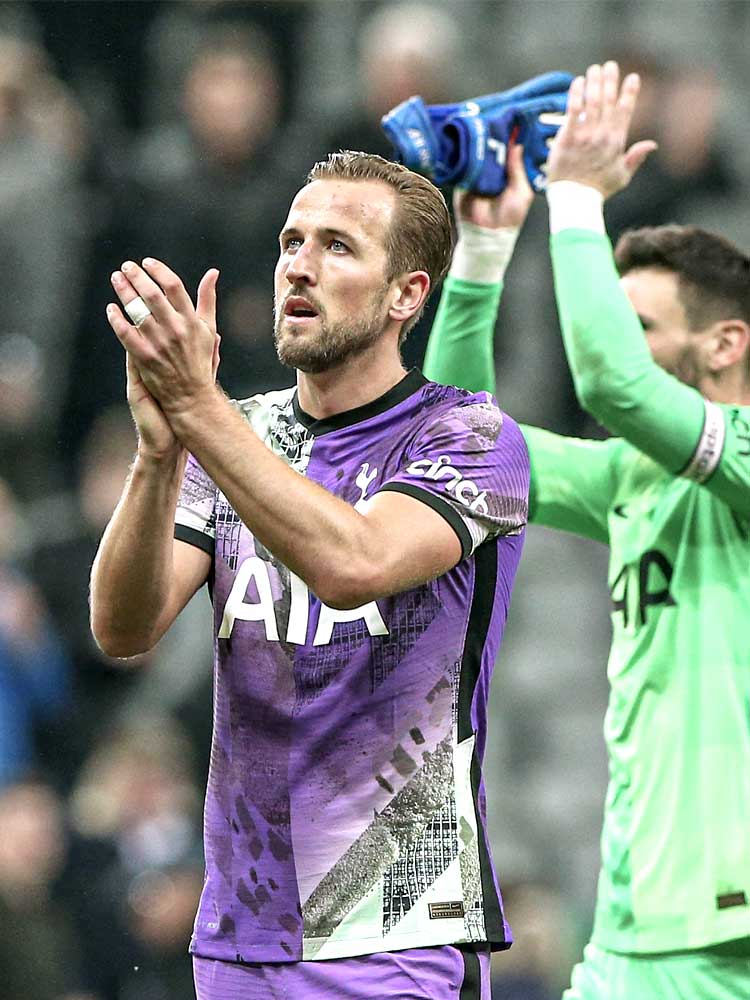 Steve Bruce's 1,000th match as manager, and the first for Newcastle under their new Saudi Arabian owners, ended in a convincing defeat at home to Tottenham. Callum Wilson's early header enhanced the positive mood that had greeted the end of Mike Ashley's reign as owner, but two goals in five minutes from Tanguy Ndombele and Harry Kane provided a reminder of the limitations that have led to their position in the Premier League's bottom three. After Son Heung-min scored Spurs' third on the stroke of half-time they offered little; Jonjo Shelvey's red card, and a late own goal from Eric Dier that perhaps flattered them, followed. "We knew we had to ignore the noise and do our job," said Spurs' manager Nuno Espírito Santo. "We did not start well but did an amazing job after. I'm really proud of them." Bruce, Newcastle's manager, said: "I will carry on as best I can until I hear otherwise."

Newcastle overlapped with variety
Overlapping movements from Joelinton and Allan Saint-Maximin took Newcastle away from the congestion that existed in central territory and away from the double pivot attempting to protect Tottenham's back four. On the left, Joelinton moved infield and Sean Longstaff advanced to provide support outside of him (below). On the right, Saint-Maximin mostly remained wide and sought to receive to feet and dribble, so Joe Willock remained central and attempted to offer a link via which to switch play, in turn encouraging Javier Manquillo to overlap from right-back. It was one such pattern that led to their opening goal.

...and countered through central territory
Tottenham's dominance of possession meant Newcastle regularly defended from inside their defensive half, and therefore countered forwards via direct passes into Callum Wilson. Wilson was supported by Joelinton's aerial presence as he moved infield (below), and Saint-Maximin from behind the ball; Saint-Maximin provided an option for possession to be set back to a teammate capable of dribble through tight spaces and away from Spurs' double pivot. Newcastle's three central midfielders rarely supported forwards; they only did so if those in front of them could retain possession for sufficient time.

Newcastle reorganised into a 4-4-2
Steve Bruce's team adopted an in-possesion 4-4-2 for the second half, having favoured a 4-1-4-1 throughout the first, via Saint-Maximin advancing to form, with Wilson, a front two (below), and Willock replacing him wide on the right. Both full-backs provided overlapping support, given Newcastle favoured building through wide territory; Jonjo Shelvey remained withdrawn in central midfield to support and switch play; Isaac Hayden advanced from alongside him, particularly when Joelinton and Willock resisted penetrating into the penalty area.

Tottenham's potency between the lines
The visitors were organised into a 4-2-3-1 shape in which Tanguy Ndombele featured as their number 10. They also consistently ensured they had at least two passing options to penetrate through the hosts' central midfield three; when one of their wide forwards drifted infield to alongside Ndombele (below), the full-back behind him advanced at an earlier stage to occupy his opposite number; the advanced positioning of Harry Kane and the spare wide forward, in turn, created increased space between the lines for Spurs to progress through Newcastle's 4-1-4-1 defensive block.

Spurs' left-sided rotations
The aggressive man-marking system applied in central midfield by Newcastle meant Spurs focused on making movements to free up Ndombele between the lines –  particularly doing so towards the left. Oliver Skipp's deeper position drew Willock towards him and provided cover behind the overlapping Sergio Reguilón; Pierre-Emile Hojbjerg, in turn, occupied Sean Longstaff, and when Son Heung-min moved infield he took Hayden with him, leaving Ndombele free (below). If direct access into Spurs' central attackers was unlikely, passes into the advancing Reguilón drew Manquillo away from Newcastle's defensive line, encouraging Spurs to then work possession back infield, as they did when scoring their equalising goal.

Support around Kane
Spurs' attacking play was later adjusted, via Lucas Moura joining Son between the lines to support from behind Kane (below), and Ndombele therefore operating from closer to Hojbjerg and Skipp, preserving the passing options they sought between the lines. Both of their full-backs advanced to provide their attacking width, contributing to Newcastle's wide midfielders retreating; if those wide midfielders resisted doing so, as Saint-Maximin was particularly guilty of doing, Spurs' full-backs provided an influential attacking outlet.

Overloads in midfield – and resisting making substitutions
When Newcastle adopted their 4-4-2, Spurs' central midfielders were able to use overloads to dominate. Moura and Son were almost permanently positioned infield, so Spurs' full-backs continued to advance (below); with Ndombele deeper, and often alongside Hojbjerg and Skipp, their options contributed significantly to the control they exerted, and encouraged Kane to remain advanced and provide a threat on goal. Nuno Espírito Santo therefore decided against using any of his subs.