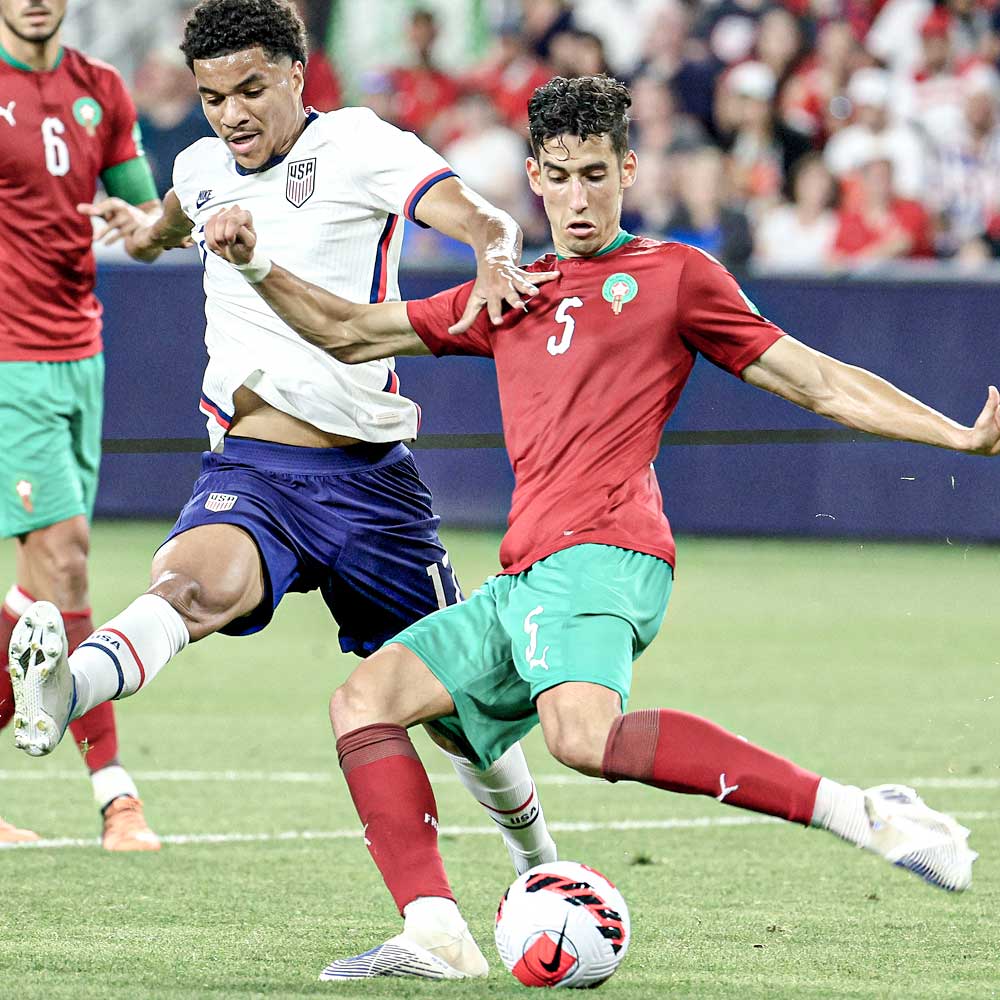 Having played for Dijon and Rennes in France's Ligue 1 since his 2018 move to Europe, Nayef Aguerd is hardly a household name. However, in the Morocco international, West Ham have signed a player tipped for great things. Many have suggested that David Moyes has pulled off a real coup by convincing the centre-back to move to the London Stadium.

As West Ham gear up for another challenge at the Premier League's top four, Moyes wants to add quality to the squad. He believes he has done just that with Aguerd.

"I am delighted to welcome Nayef to West Ham," Moyes said. "We have tracked his progress for some time and I'm very pleased that we have been able to complete the signing. He's a great addition that will add to our defensive options. I have been really impressed with Nayef's character and attitude during our discussions. He has a great desire to improve and be successful, and I am sure he will fit in very well."

Aguerd is a left-footed centre-back who has gained most of his experience playing in a back four in France for Rennes and Dijon. Before that, however, he had played on the left of a back three with FUS Rabat in his native Morocco.

He is strong in the air, where he times his jumps well and is able to hang to win aerial battles. He is aggressive when attacking the ball, and will readily leave his slot in defence to move out and challenge further forward, attacking the ball in central midfield or in wider areas (below).

This approach naturally comes with risk, as he is potentially leaving a forward in space behind him. Although his success rate in the air is impressive – he ranked sixth in Ligue 1 for aerial duels won in 2021/22 – he can cause imbalances in the back line by moving out to challenge. When he doesn’t win the first contact, he can leave defensive teammates exposed.

His aerial ability is useful at set-pieces at both ends of the pitch, however. His new club, who have been hugely effective at dead-ball situations under Moyes, will only improve with Aguerd’s arrival.

He also takes a front-foot, aggressive approach to duels on the ground and one-on-one defending. He often steps out of the back line to engage attackers who are trying to receive between the lines (below), attempting to get to them before they can turn to face the defence and so force play away from goal. When possible, he will make contact with the opponent on the ball, holding them to stop them from turning and also making attempts to win the ball back early. Although this can sometimes lead to fouls, this proactive approach will usually lead to a regain or – at the very least – opponents being forced to play away from goal.

Aguerd is a leader on the pitch. He often leads the line in pushing out, which goes hand in hand with his front-footed approach. He demands a lot of his teammates, and his attempts to push out quickly will often lead to his team squeezing a few extra yards up the pitch than other teams might. Even when defending in a low block, Aguerd will often push the back line up aggressively following a clearance, while demanding the midfield line ahead jump forward too.

On the ball, Aguerd’s stand-out trait is his long passing – especially balls he hits diagonally across the pitch to the right. These are similar to those hit by Virgil van Dijk for Liverpool, who also plays as a left-sided centre-back. However, as Van Dijk is right-footed, he drills through the ball to generate backspin, which sees the pass drop over opponents. Aguerd, a natural left-footer, can drive through the ball to hit straight passes. However, he usually hits long balls with bend on them, which curl out towards the touchline and so lack the angle to encourage the receiver to run on to the pass.

Aguerd’s best long balls to the right, therefore, target a static teammate. As a result, it’s quite common for Aguerd to switch play to a teammate who has support close by (below), who they can find with their first or second touch. Attackers moving wide on the right or teammates creating overloads on the far side of the pitch are both therefore useful in a team featuring Aguerd.

Playing as one of two centre-backs

Throughout the 2021/22 season, Aguerd was usually paired with Warmed Omari in a back four for Rennes. Aguerd dominated the aerial duels, while Omari acted as the covering defender. Rennes’ full-backs – Hamari Traoré and Adrien Truffert – both provided width and lots of crosses in the attacking phase, so Aguerd’s long passing often connected into the feet of right-back Traoré, who pushed forward in the knowledge that Aguerd had the ability to switch play. As a result, Omari covered further over on the right. Aguerd moved into the middle to defend the central spaces in what was effect a temporary back three (below). Alternatively, Aguerd held his position as the left centre-back and a central midfielder dropped in to form a three.

If the team lost the ball in midfield, Aguerd went on the front foot, pressing into midfield to delay the attack or make a direct attempt to win possession (above). Omari would then act as the cover in behind, supported by the recovering full-backs and a dropping central midfielder.

Playing in a back three

For FUS Rabat, Aguerd featured on the left side of a back three. His aggressive approach was clear to see at that early stage in his career. In this wider role he was even more exposed to one-on-one situations, but proved capable when isolated against an attacker. This was also true when defending the back post against a wide forward who made a late run to try and get on the end of a cross.

His final season in this shape was 2017/18, so it is a while since he played there. But with the extra skills and experience he picked up in Ligue 1, there is every reason to believe he will be comfortable playing in either shape. Given Moyes has regularly shifted between a back three and back four at West Ham, Aguerd could prove a very useful signing.