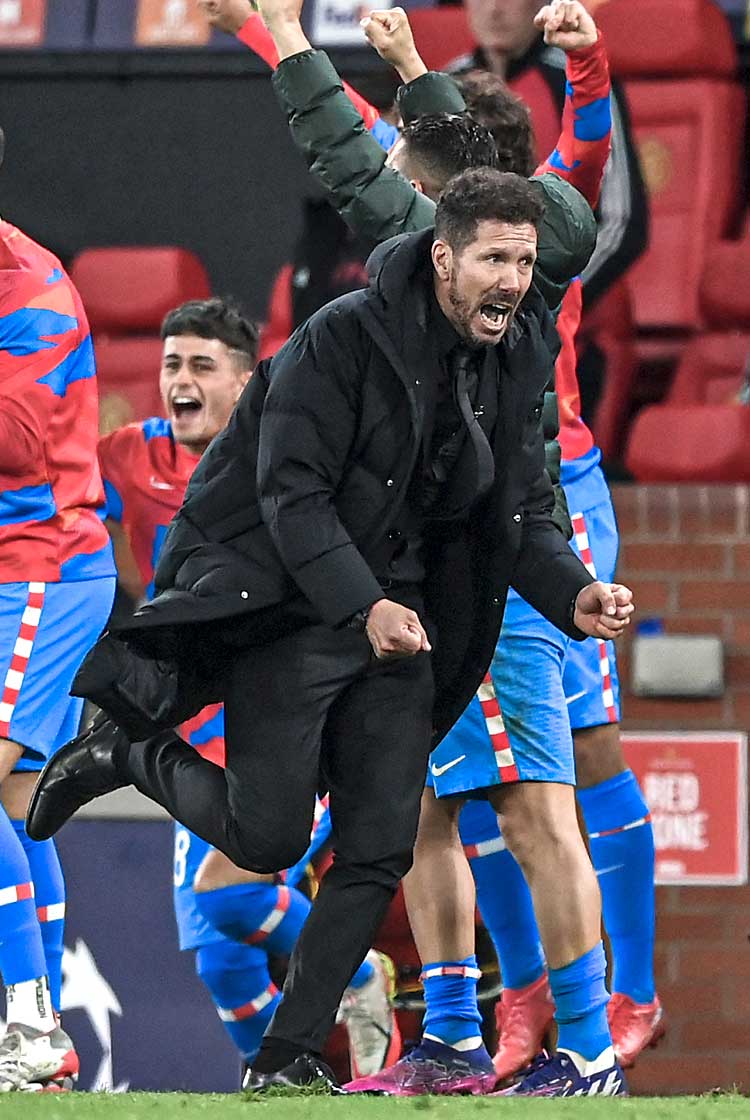 Manchester United crashed out of the Champions League after a home defeat to Diego Simeone's typically dogged Atlético Madrid. After Renan Lodi put the visitors ahead, Ralf Rangnick's side struggled to find a way through Atlético, who dug in and ground out a clean sheet to see them through to the competition's quarter finals. Following this win, Simeone's Atlético now boast the impressive record of having won at Old Trafford, Anfield, Stamford Bridge, the Emirates Stadium and the King Power Stadium.

Rangnick said it was crucial that Atlético got the game's first goal. "We played a good first half, all those things that we planned to do in the first half the team did," he said. "The only thing we didn’t achieve is to convert that energetic performance into the first goal and against a team like Atlético it’s highly important you score the first goal."

Manchester United were set up in an in-possession 4-2-3-1, up against Atlético Madrid's 5-3-2 defensive block. The hosts built around Atlético’s front two and progressed down the flanks. A strong spell in the first half came as a result of Cristiano Ronaldo dropping out to combine between a full-back and winger (below). Fred then pushed forward from the double pivot to support Bruno Fernandes, and the two of them occupied the gaps between the away side's midfield three. Anthony Elanga then moved inside, with Diogo Dalot providing support around the outside, as United frequently progressed into Atlético’s half.

When Ronaldo drifted out to the left, left-back Alex Telles was more aggressive with his positioning. He overlapped to support Jadon Sancho, who made direct runs in behind, especially after moving into the inside channel. Ronaldo focused more on progressive combinations on this side (below), as he attempted to receive back inside and find positions to shoot across goal. He was consistently crowded out, though, and struggled to affect the game.

Despite United repeatedly progressing forwards – which forced Atlético into a low block for considerable periods in the second half – they lacked a presence in the penalty area. Even when their wide build-up managed to pull one of Atlético’s centre-backs across, creating significant gaps in the back line of five (below), United had little to offer in the way of movements in behind. Central play in front of the defence was covered by Atlético’s midfielders, and United struggled to penetrate despite all of their possession.

After a host of changes, the home side moved to a 4-4-2 in attack, with Edinson Cavani joining Ronaldo up front against Atlético’s three centre-backs. Paul Pogba and Nemanja Matic made up the midfield two, with wingers Sancho and Marcus Rashford supported by Telles and Dalot (below). Atlético dropped into a 5-4-1 block as the game wore on, which further crowded the centre of the pitch. Combinations between United's wingers and full-backs through the inside channels proved the most effective way for them to penetrate inside Atlético’s wide midfielders. However, United were unable to create many chances note and a crucial equaliser eluded them.

Manchester United put pressure on Atlético from the start, and that contributed to their strong start. Atlético’s wing-backs, Renan Lodi and Marcos Llorente, were aggressively pressed by United's full-backs, who were free to jumped out of defence. Initially, Atlético’s three centre-backs were pressed by United's front three, with the central midfield unit working man for man (below). However, to limit Atlético’s wide progress, United forced the ball out to the away side's wing-back, locked the ball along the touchline, and covered the passing options back inside. To begin with, at least, they did this very well.

Once Atlético pushed their wing-backs higher, United’s wider press was less effective, with significant gaps appearing between the hosts' wingers and full-backs. The home side then defended with a 4-4-2 block, while Atlético attacked in a 3-5-2 shape (below). Koke pushed forwards from central midfield, and Atlético targeted their two centre-forwards with direct passes, while Koke made delayed runs from midfield. However, United's centre-backs dealt with any direct play forward pretty well, and Atlético didn't do much of note until they began to connect with passes into central midfield.

Once Atlético found their central midfielders, Antoine Griezmann’s movements proved particularly effective. The visitors already had a three-on-two central midfield overload, and this was enhanced further when Griezmann dropped into midfield, which gave Harry Maguire a decision to make: should he follow Griezmann into midfield or remain in the backline and leave the Frenchman free to turn? He chose to stay tight to his opponent, and in doing so left a gap in the right inside channel.

This was then targeted by Atlético, with the wing-backs making runs in behind (below). As Atlético’s central midfield three – along with Griezmann – began to dominate, United's wide midfielders narrowed, leaving the full-backs more exposed when Llorente and Lodi attacked. João Félix locking on to Raphaël Varane also allowed Lodi to isolate Dalot throughout the first period, and it was Lodi who scored the game's crucial only goal.

As Atlético used a low block for longer periods in the second half, they focused on incisive counter-attacks when they regained possession. They attempted to target the wide areas, with Félix and Griezmann dropping to connect into the overlapping wing-backs. Holding on to their lead was the most important thing for the visitors, though, and they dropped back into a 5-4-1 when defending. Griezmann dropped out of the front line, leaving Félix alone up front. Atlético therefore focused on their left side after a regain, as Griezmann needed time to move back into the centre. Griezmann’s movements back into the centre were used as a decoy, pulling United’s midfield and back line away from the left, leaving more space for Lodi (below). Simeone's men ultimately held out for yet another famous win on English soil.