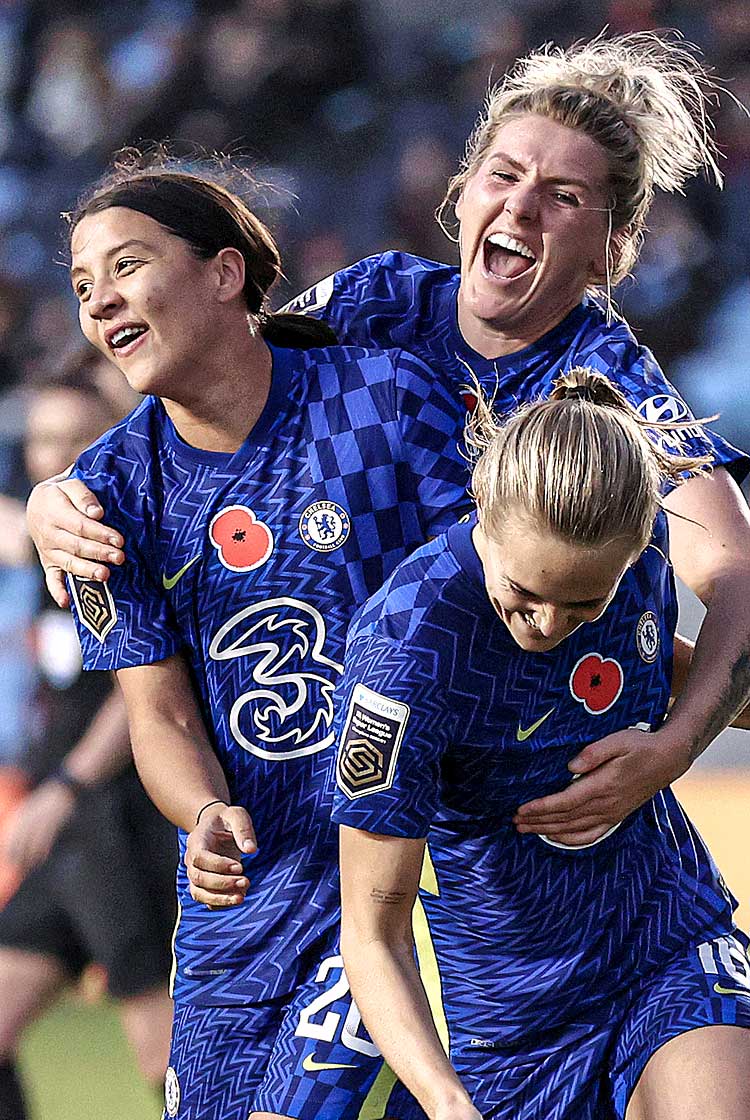 Reigning Women's Super League champions Chelsea gained ground on Arsenal at the top of the table after dismantling Manchester City in convincing style. Emma Hayes' team was the better side from start to finish, and took little more than a minute to take a lead they would never lose. Hayes was impressed by her players' resilience, following a busy period in their schedule. "We have had a game every three or four days, and that is not easy," Hayes said. "What we did here today, without us being at our best out of possession and with possession – that ability to suffer and stay in the game – that is why our team is one of the best teams."

City manager Gareth Taylor believed his side deserved more from the game. "I thought in the first half we were very good; in the second half it was more even and again we were punished [for not defending] well enough from a set-piece," he said. “It’s a tough score to take, but there were real positives. On another day we stay in the game and have a chance to win it."

Width in attack
Manchester City set up in a 4-3-3 formation in possession, with Georgia Stanway, Jill Scott, Alex Greenwood and Demi Stokes forming the back four. Keira Walsh, Filippa Angeldal and Caroline Weir operated in midfield, and Jessica Park, Ellen White and Lauren Hemp played in attack. Wide attackers Park and Hemp stretched the pitch and provided the team’s width.

Rotations involving the full-backs
City used rotations that involved their full-backs to try and disrupt Chelsea’s shape and evade their high press. Stokes made diagonal runs inside from left-back, which triggered Weir's movement into a full-back position, while Hemp dropped from a high and wide position into the half-space. These movements helped City play through Chelsea’s shape, giving the ball-carrier two passing options to play forwards.

Up-back-through patterns
City used central midfielders Weir and Angeldal in high central positions, and Hemp and Park out wide. This allowed central striker White to drop towards the ball to receive from Walsh, Scott or Greenwood, dragging Chelsea centre-back Jess Carter out of position in the process. In drawing Carter out of the Chelsea defensive line, White then created space for penetrative runs from Weir or Angeldal. City managed to get in behind Chelsea’s structure in the first half as a result, but Chelsea stifled White as the game progressed and their up-back-through pattern became less effective.

Five/three at the back
Chelsea's 5-2-3 out-of-possession shape became a 3-4-3 when in possession. Millie Bright, Jess Carter and Magdalena Eriksson played as the three centre-backs, with Erin Cuthbert and Guro Reiten as the wing-backs. Ji So-yun and Melanie Leupolz played in midfield, while Fran Kirby, Sam Kerr and Jessie Fleming formed the front line.

Chelsea’s high press proved effective
Chelsea used a very aggressive high press when City looked to build from the back. Kirby and Fleming pressed the outside shoulder of the centre-backs and forced play inside. With pressure coming from both sides, it was exceptionally difficult for City to make the pitch big and use their width as they built play. This resulted in lots of straight passes – which Chelsea used as pressing triggers – as well as inaccurate passes and tackles that resulted in regains. Two of Chelsea’s four goals came as a result of regains high up the pitch.

City struggled to contain Chelsea throughout
As City used a 4-4-2 out of possession, Chelsea found it easy to create overloads in the initial phases of their build-up. Eriksson and Bright – the wider centre-backs – were able to step out with the ball after a switch of play, forcing City forwards Ellen White and Caroline Weir to run across the pitch to cover. The City midfield then narrowed to restrict access into Kirby, Fleming and Kerr, but this left Chelsea’s wing-backs free out wide. City’s full-backs then moved out to engage with the Chelsea wing-backs, but this opened up space in the wide channels for Chelsea’s attackers to make runs into. A City centre-back then had to move out to defend in the wider areas, which left space in the middle. Chelsea constantly got into dangerous areas out wide, and City struggled with this throughout the game; had they spread their midfield out more to stop Chelsea finding their wing-backs, Chelsea would have simply played through the gaps in midfield.

Dominant Chelsea’s change of shape
Chelsea switched to a 4-2-3-1 and changed their pressing approach in the second half. They used lone striker Kerr to force play outside and aimed to trap City in the wide areas. The far-side winger was always ready to press the shoulder of the far-side centre-back if City made any attempt to switch play. In possession, the new shape continued to lead to overloads in the wide areas. City’s midfield remained narrow in order to deal with the threat between the lines, but this left Chelsea’s full-backs and wide attackers to attack each City full-back. Substitute Sophie Ingle and Leupolz often played on different lines, making it look like a single pivot at times and giving Chelsea greater numbers higher up the pitch.