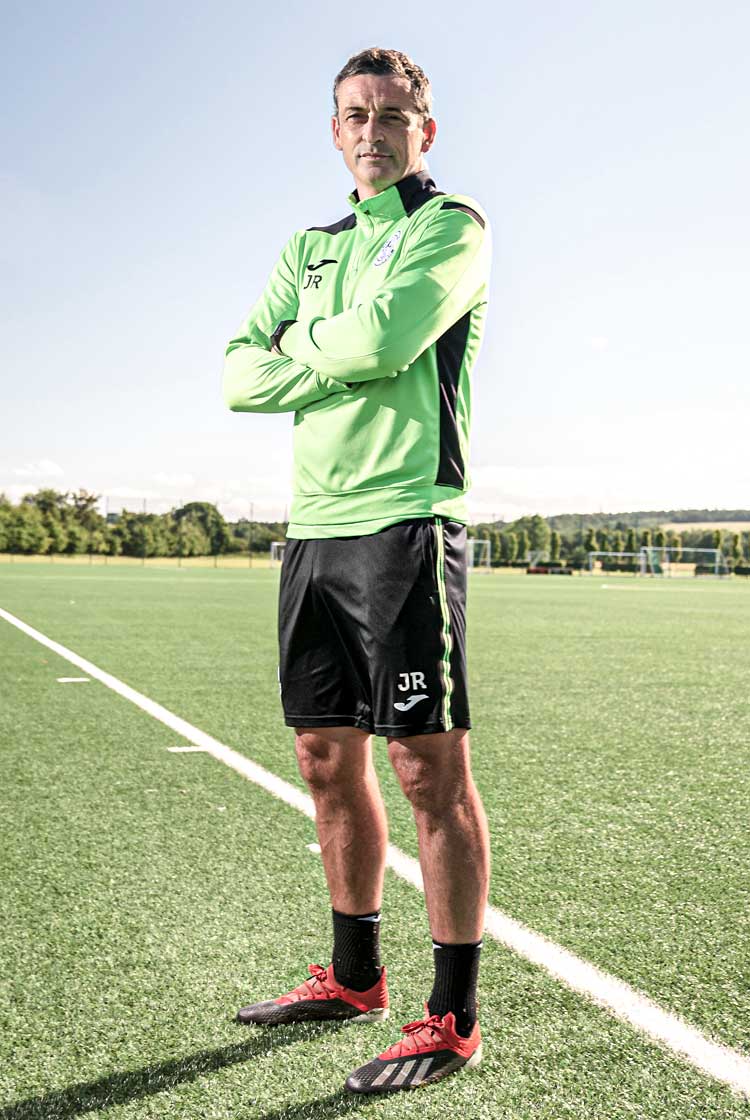 Hibernian manager Jack Ross was our guest on a Coaches’ Voice live webinar to discuss management psychology, and whether it is better to be principled or flexible as a top-level manager.

Having managed in the Scottish lower leagues with Alloa and St Mirren, in League One with Sunderland, and now in the Scottish Premiership with Hibs, Ross drew on his wide-ranging experience to share his thoughts with CV Academy subscribers on how to balance principles with pragmatism.

In the webinar, Ross considered whether it is better to be principled or flexible in managing a team and preparing for games. Is it better to base your ideas on a given set of rules, or to be ready to change and adapt to the circumstances you face?

In each of his managerial jobs, Ross has first of all tried to establish a realistic ambition with his players. When he took over at St Mirren, they were fighting against relegation from the Scottish Championship. After avoiding the drop impressively, however, their form suggested they could aim far higher, so the goal for the following campaign was to win the title – which he achieved.

Shortly afterwards he joined Sunderland, where again there was an expectation of a challenge at the top of the league. At Hibs he established, along with his squad, that a title win wasn’t achievable given the competition from Rangers and Celtic. Nonetheless, there were a set of principles and values that he wanted to see from his players in attempting to achieve their goals, such as playing with togetherness, positivity and pride.

When it comes to the tactical side of the game, Ross does not think it is right to have a set philosophy. Instead, tactical decisions should be dictated by previous knowledge, experience and self-belief, as well as resources, circumstances and expectations. In other words, he believes it is reasonable to use some of what has worked before, but also to recognise that factors such as the club’s ambitions or finances will play a part, too.

In his management, Ross focuses on what he calls “four very broad cornerstones”: defending, pressing, countering and switching. He implements his ideas on these foundations in “a very structured, very organised environment”. In this sense, he says he is very much a principled manager. He also has core principles he wants his teams to play with, and bases much of his team’s training around those principles.

However, while Rangers – an example he gives – are very principled in how they play, lining up in a 4-3-3 every week regardless of personnel available and having great success in doing so, Ross likes his Hibs team to be able to change system on a game-by-game basis, and even be able to do so in-game. By working on playing with both a back three and a back four, his team can adapt depending on the opposition and the aims in any game or at any particular time in a game. Nonetheless, there are principles that remain constant.

Ross admits that results are always the main priority for a manager, but he also says it is important to take some enjoyment from a positive performance or even just aspects of a performance. He says the most satisfying part of his job is the process coming together, of solving a puzzle successfully.

Ross says his role, first and foremost, is that of a problem-solver and a decision-maker. To be those two things, being both principled and flexible are key. Each club’s and each manager’s circumstances will differ; for Ross, it is important to balance principles and flexibility in order to succeed.

Having finished third in the league behind Celtic and title-winners Rangers, Ross and Hibs achieved their goals for 2020/21, so a new set of goals have been established for the next campaign.

To hear exactly what Jack Ross had to say, watch his webinar in full here. If you want to see more top coaches in action on the grass – including Jack – and learn from the very best, then watch our coaching courses, take a look at our session plan library and become the best coach you can be by visiting the Coaches’ Voice Academy.