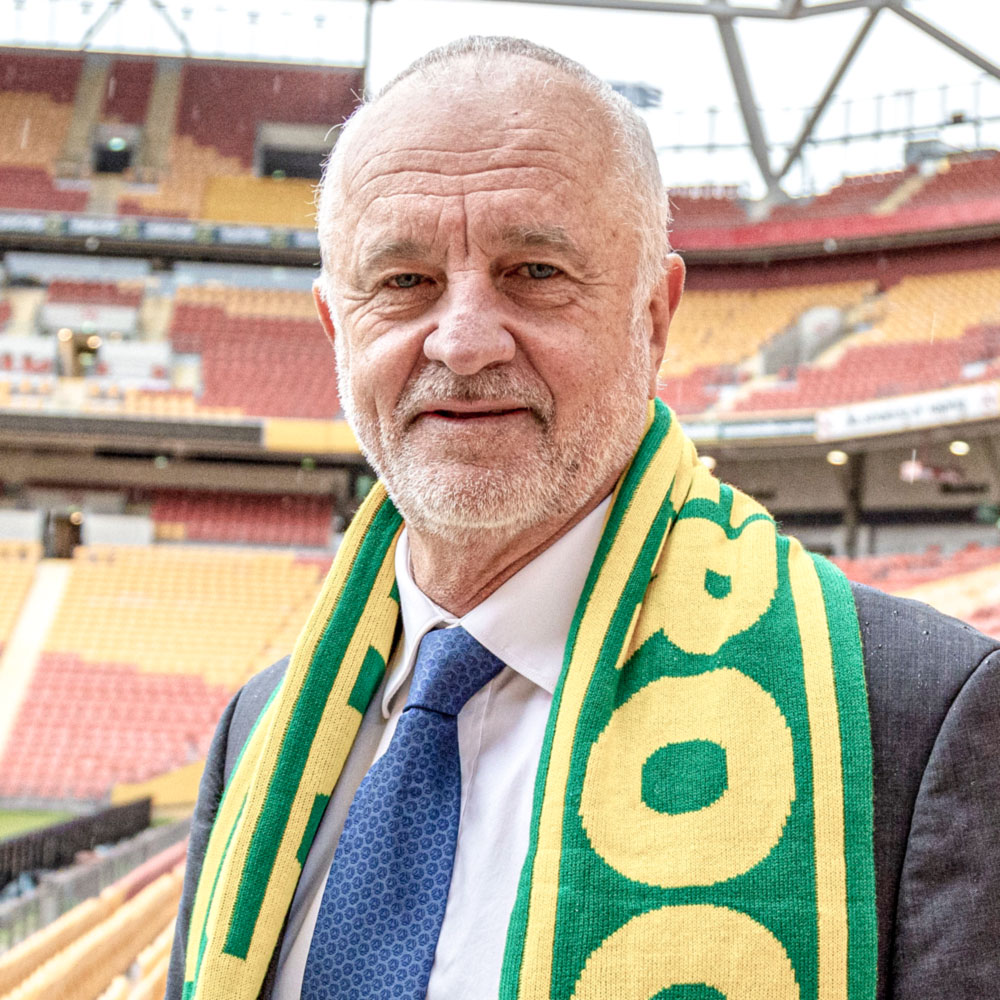 My coaching career started in reverse.

My breakthrough came in international football, as the Socceroos assistant under Frank Farina. It was later that I seized on that to move into club football. I should have got the experience of the everyday environment first.

We achieved some really good things under Frank, with the golden generation of Harry Kewell, Mark Viduka, Tim Cahill and more. Frank built that, and we won bronze at the Confederations Cup in 2001. When he moved on, I stayed to work under Guus Hiddink, his successor.

What I learned from Guus in a year would have taken me 10 on my own. It was incredible. He wasn’t full-time – he was also at PSV Eindhoven, and could only work for the federation for 28 days in the year leading up to the 2006 World Cup. So when he came in, he gave me a lot of responsibility with planning and organisation.

His attention to detail was frightening. Before he took the job, he knew every one of our players’ strengths and weaknesses. The players admired him straight away.

Every detail was looked at before even talking about football. The flights we booked, the players’ seats on the plane, the training facilities, the time difference, where the referee was from. It was about getting the off-the-field planning right so that there were no excuses or distractions for the players.

“One of the major parts of coaching is eliminating excuses for players,” he once told me. “If you get everything right off the field, they’ve got no excuses. They can’t say: ‘We didn’t practise that, so it’s not our fault.’”

"hiddink was very firm with harry. with mark, he was a lot softer and more communicative"

His man-management was also incredible. Kewell, Viduka and Cahill are the best three players Australia has ever had. What Harry and Mark did with Leeds United, and Timmy with Everton, probably won’t be repeated in my lifetime. We haven’t developed players like that since, but Guus got the best out of them.

He was very firm with Harry. With Mark, he was a lot softer and more communicative; and with Timmy he was also quite firm. He had an understanding of behaviour and how to get the most out of certain people. When we played Uruguay in Sydney, in the second leg of the qualification playoff for the 2006 World Cup, he left Harry on the bench. Because I’m Australian, I said: “Boss, mate, you can’t do that. You’re leaving Harry Kewell on the bench.”

He just said: “Okay, but Harry Kewell will take us to the World Cup when he comes on, so don’t talk to him.” Harry didn’t accept it well, but he came on, set up the winning goal for Mark Bresciano and was magnificent. Guus, with his experience and knowledge, knew how to deal with those types of player.

I coached those three in the Asian Cup the year after and I tried to do the same, but it doesn’t work when you’re a nobody, as I was at the time. Guus is a remarkable manager – it was an education.

When Pim Verbeek took over from Guus, I then learned about building a family culture. He was more like a father to kids. He was very, very communicative and very hands-on, including sending text messages to the players to make them feel wanted and get the best out of them.

Those guys really changed my life.

"at the mariners, for perhaps the first time in australian football, i played with a diamond midfield behind two number nines"

After the Olympics in 2008, I knew that if I wanted to continue as a coach I needed to go to clubland. To get used to the day-to-day stuff; the week-to-week preparation of players.

I joined Central Coast Mariners in 2010, when they were on their way down, and it was make-or-break. They’d finished eighth in the A-League the season before, and if I didn’t do well it was probably over for me as a manager. If I did, then I could move forward.

When I’d last been in club football, it was semi-pro. The A-League started in 2005, so it had since become professional. You could train twice a day, every day, build a facility where you could have lunch with the players and control their diets, and develop the off-the-field resources you needed to enhance the boys’ bodies and performances.

I’m very, very flexible. I play players to their strengths and the tactical side of the game. My preference is for a high-pressing game and to go put the opposition under pressure – it’s about when to do it. In possession, it’s about effective rotations, breaking the lines and penetrating in behind. You can make football hard or you can make it simple, and if you play players to their strengths they feel comfortable and know what they can do. So you adapt their role to that.

Previously in Australia, the conventional wisdom had been that systems make players, but I believed that players made systems and in playing players to their strengths. At the Mariners, for perhaps the first time in Australian football, I played with a diamond midfield behind two number nines. It took a while for the opposition to work that out.

I also went back to a youth policy. I found Maty Ryan, Tommy Rogic and Trent Sainsbury, all at 18, and built the Mariners’ next generation of players. But I was very fortunate – our chairman demanded that we sell to survive, so the results weren’t that important. It became more about developing the kids and selling them on.

"the players weren't just training and going home. they were hanging around together and becoming mates"

The club hadn’t had a gymnasium, a recovery pool or a good training pitch. All of those things affect performance, and by then I knew we would only be as good on the field as we were off it. So I told the chairman I was prepared to focus on the kids, but that we’d need to build these facilities.

We also built a hut where we could eat lunch that was cooked by a chef. I was taking $20 a week from the players’ salaries for food, and we also got a fruit and vegetable sponsor – but because we were eating together there was more communication, which made it a much better environment. The players weren’t just training and going home. They were hanging around together and becoming mates, which helped as well.

In my three years there we qualified for the Asian Champions League twice. I selected more kids in it – the Australian salary cap meant we were never going to win it, so we could treat it as a bonus and give them opportunities, and therefore more belief, against quality players.

In that first year, we came second in the A-League, and lost the Grand Final on a penalty shootout to Ange Postecoglou’s Brisbane Roar. In the second year we won the Premiership, finishing top of the table at the end of the regular season, and in the third year we won the Championship after again finishing second (above). That progress had been about putting trust in the kids and their energy, and believing that they could get the job done.

While I was still with the Mariners, I was interviewed by Sheffield United. But I felt like my nationality meant that they questioned my knowledge, and therefore that I wouldn’t be trusted fully. There were also a couple of other jobs offers – including from Sydney FC – but the timing just wasn’t right. I would have been doing a disservice to the kids who had signed contracts, so I wanted to stay and see the job through.

The chance to go to Sydney FC – the biggest club in the country – arose again in 2014. The timing was better, although I was gobsmacked at how bad the culture was there, and at their resources off the field.

"everyone talks about recruitment and quality, but one of the most important things is the person"

Alessandro Del Piero was among their players, and he had his own dressing room. There was no collective at the club, and you can’t have that if you want to create a team. One of my first big decisions was whether to keep him or move him on, and I moved him on. As a coach, you have to follow your gut.

I put a load of rules in place, and got a gymnasium and training pitch built. I started to get the players in earlier, for breakfast, and also fixed up our video analysis.

The culture had needed rebuilding. We got a crèche put in because there had been no care for what the families were doing or where the wives and their kids were sat in the stadium. I also hosted a family function before the start of the season, to try to make the wives feel as important as the players, and to try to develop the feeling of a family.

Everyone talks about recruitment and quality, but one of the most important things is the person. If you get a recommendation that the player is a good person, then you’ve got a good chance of being successful. I also got rid of a dozen players, and had to clear out some staff. We all had to be on the same page.

In that first year we made the Grand Final, but that was a miracle because we were disjointed and not in good shape. That second year – another one of turning over personnel – we missed out on the top six in the A-League but made the last 16 of the AFC Champions League.

Heading into the third year, everything was ready. Our resources and culture had been rebuilt, and our recruitment had been done. The players were also ready, and it showed – successive titles followed.

"i feel for gareth southgate when i read things. i don't think people understand how difficult it is to coach your nation"

I was offered the position with the Socceroos in 2018. It’s the biggest job an Australian can have, and also the one that carries the most pressure.

By then I’d achieved what I could with Sydney FC, and if I hadn’t joined the Socceroos I’d have moved on anyway. The group I had in Sydney was starting to age and would have needed rebuilding, and I had a relationship with those players I didn’t want to kill.

I feel for Gareth Southgate when I read certain things. I don’t think people understand how difficult it is to coach your nation.

Inside your heart and body you’ve got this passion for your country, and you want nothing more than to be successful. On top of that you’re then carrying your country’s expectations.

The ageing group Australia had had meant I needed to develop players and create depth, and so qualify for the 2022 World Cup in the hardest way possible – by developing players and winning matches at the same time.

Doing so during the pandemic made it even more difficult. I missed two camps with Covid and a number of players also went down with it, but we achieved some great things. We qualified for the Olympics for the first time in 12 years, and we broke a world record by winning 11 straight World Cup qualifiers.

The boys made a lot of sacrifices and showed a lot of commitment, but in those two playoff ties, against the United Arab Emirates and then Peru, they were determined to get the job done. We’d used 45 players throughout that campaign, and they travelled back from all over the world – sometimes without the consent of their clubs.

When qualification was secured, it was a relief for us all. We’d got one job done. Now, at the World Cup, we face another.