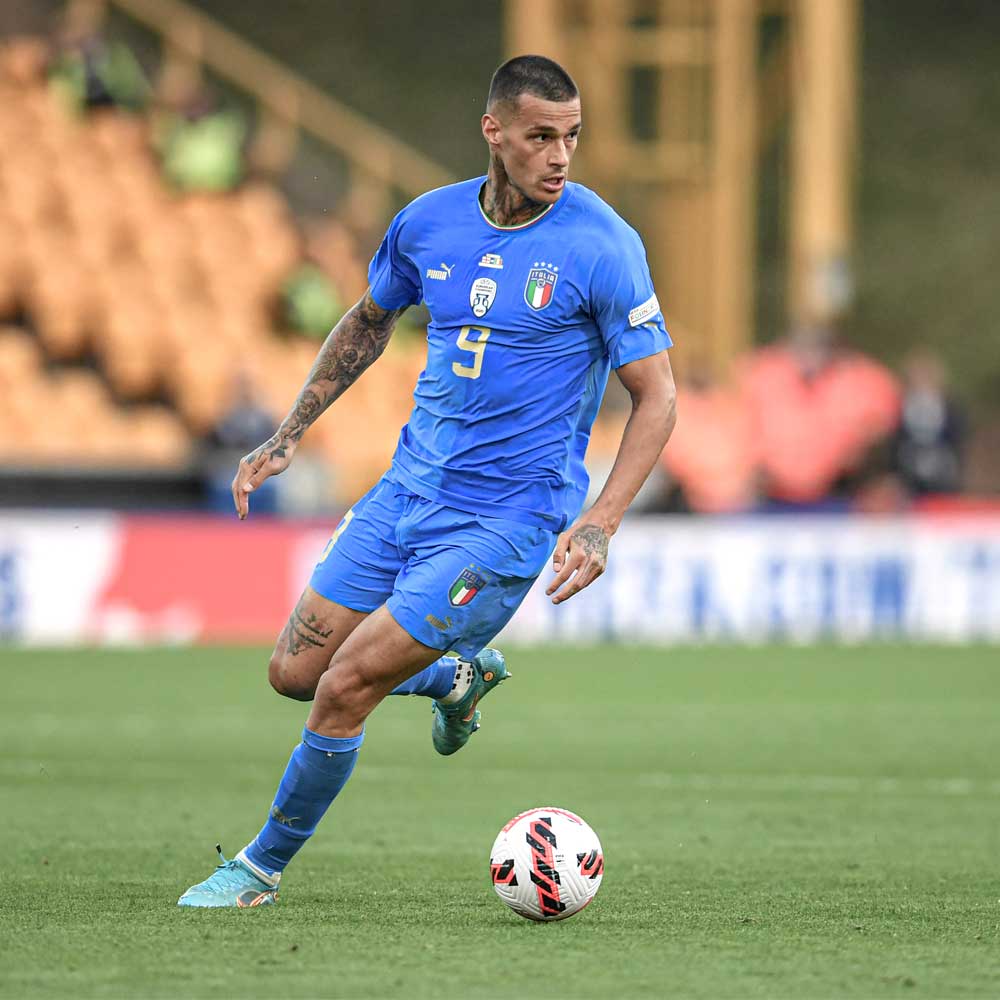 West Ham made a statement in the summer 2022 transfer window by bringing 6ft 5ins centre-forward Gianluca Scamacca in from Sassuolo. Signed for a reported £35m, Scamacca was Roberto Mancini's first-choice striker for the Italy national side by the age of just 23. And, after a fine 2021/22 in Serie A, he has now earned a big-money move to the Premier League. West Ham manager David Moyes is expecting the striker to live up to expectations.

“We’ve been looking to add more strength to our attacking options for a while, so we’re delighted to have got Gianluca in,” Moyes said. “He comes really well recommended – and we’re looking forward to working with him. He’s a young centre-forward with a really bright future ahead of him.”

Scamacca is a very tall, broad, right-footed centre-forward who provides physical presence up front, both in open play and at set-pieces, as well as a significant and consistent goal threat. When his team have possession in the final third, he makes clever movements, subtly drifting away from his marker to get into space in which he can make a clear run to attack aerial balls into the penalty area. When he attacks crosses, he adjusts his body impressively to meet the ball, and has the ability to finish using a variety of different techniques.

Scamacca is big enough to win headers in direct battles with opponents, so he provides a threat in underloaded situations in the penalty area. Beyond that, however, he also has the nous to get free of opponents. He bends his runs across the defence, after having initially positioned himself close to weaker or smaller opponents such as a full-back (below). He will then often make a lateral run across a centre-back to give himself even more of an advantage than his height already gives him.

Scamacca is more mobile than many other players his size. When his team have the ball in deeper positions, he will offer direct, penetrative runs in behind. He can accelerate away from defenders, although he isn’t quick enough to maintain any advantage he creates with that first movement, so he will tend to attempt a finish as soon as possible. He is calm in front of goal, and matches the power on his shots with accuracy (below). If and when an opponent catches him, Scamacca has the strength to hold off defenders, showing good close control and the ability to get a shot off while under pressure.

He likes to receive to feet, and uses the runs made by wide players in behind to find space to shoot. He uses a relatively large backlift to generate lots of power, which can mean he requires more time and space to shoot than other forwards, but he doesn’t require much follow-through after making contact with the ball. His shooting is powerful enough that he often beats goalkeepers because of the speed at which the ball travels towards goal, rather than particularly accurate finishing.

Scamacca links play with midfield after dropping away from goal, and is able to play off one or two touches when doing so. He has the ability and vision to flick the ball around the corner to continue to progress play (below), while he is also big and strong enough to hold the ball up and set it back to forward-facing teammates. He can also secure the ball well with his first touch and hold play up while midfielders catch up. It is his ability to do this and combine in tight areas, though, for which he impresses most, as this can be crucial in helping his team to unlock a deep, compact defence. Given he also provides an aerial presence that lends itself to a more direct approach, he is a good player to have on the pitch when his team is chasing a late equaliser.

Scamacca recorded his best goal return in a league campaign in 2021/22, with 16. Playing as the lone centre-forward in Sassuolo’s 4-2-3-1 shape, he lined up ahead of number 10 Giacomo Raspadori. The two combined well in central areas, and did a particularly good job of taking each other's markers away from play through well-timed, co-ordinated movements in opposite directions. Domenico Berardi played on the right, with Hamed Traoré, Jérémie Boga or Georgios Kyriakopoulos – a full-back by trade – on the left.

Scamacca acted as the main focal point for the team, with a larger portion of Sassuolo's attacking play coming through the central channel than any other team in Serie A. When they did go down the flanks, their players used individual dribbling to draw as many opponents towards the ball as possible. Only AC Milan completed more successful dribbles in 2021/22 than Sassuolo, with Scamacca then able to find more space in the middle to attack crosses or run in behind (above). The attacking midfield three behind Scamacca often looked to connect with him early with driving runs towards goal. He then used their runs to either try and play a ball in behind, or turn and shoot himself.

Scamacca regularly dropped into the spaces between the lines to receive vertical passes from defence, before setting the ball back to one of a narrow attacking-midfield three. Sassuolo’s double pivot of Maxime López and Davide Frattesi also often played passes into Scamacca through the central spaces. A regular route up the pitch, meanwhile, involved Scamacca dropping or moving into a wider channel to receive a reversed ball from one of the full-backs.

Sassuolo’s attacking midfielders regularly made runs beyond Scamacca when he dropped deep to receive. This pushed the opposition’s defensive line deeper, taking players away from Scamacca, which meant he was often able to turn and play forwards (above). When operating against a low block, these central connections between Scamacca and the three attacking midfielders behind him were a key part of Sassuolo’s play – especially when attacks around the opposition and crosses weren’t producing results.

The Italian youngster seemingly has all the attributes needed to succeed as a number 9 in the Premier League. With Moyes likely to set his team up to make the most of his new centre-forward's talents, there is every reason to believe he can prove his worth.