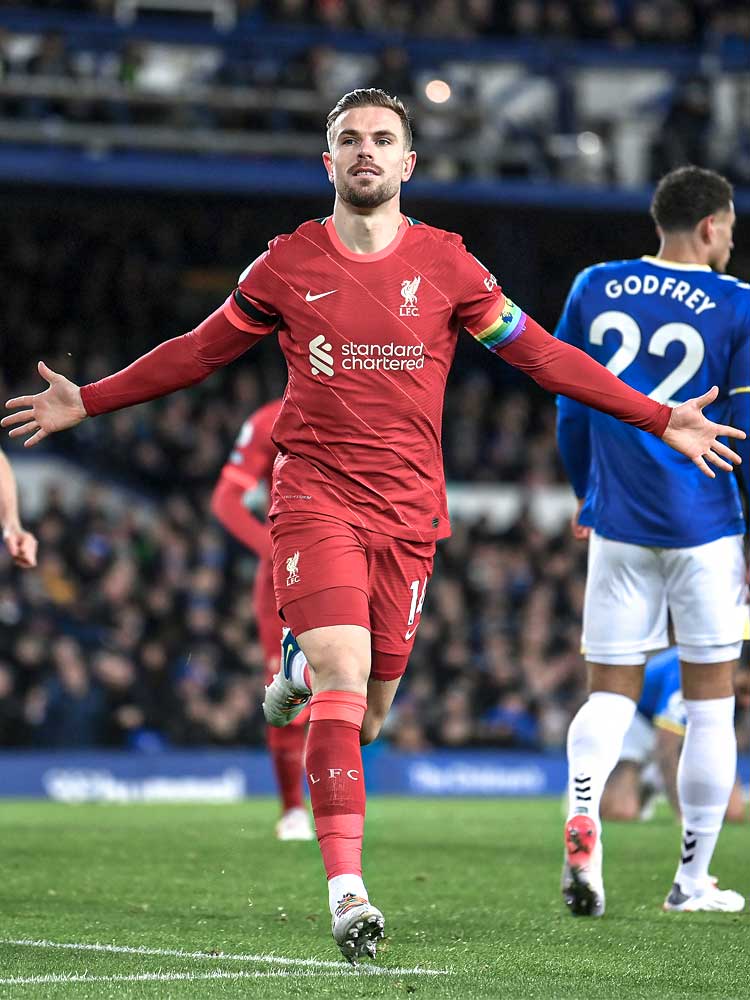 Rafa Benítez's first Merseyside derby as Everton manager ended in a one-sided defeat by his former team. First-half goals from Jordan Henderson and Mo Salah rewarded Liverpool's dominance, as did further finishes in the second half from Salah and Diogo Jota, ensuring Demarai Gray's strike towards the end of the first half came to little. Victory kept third-placed Liverpool within two points of Premier League leaders Chelsea; after an encouraging start to the season, Everton are 14th. "I had moments that I enjoyed a lot," said Liverpool manager Jürgen Klopp. "It was by far the best performance we've done at Goodison. We made a big step in our development that we can take these kind of games, even though they are really important for the opponent. We can put emotions to the side. What football moments we had in the first half – incredible. The positions we put on the pitch made it really difficult to get at us." Benítez said: "I am convinced we will do well in the second part of the season but we have to start winning to be sure we can keep the belief."

Attacking with width
With Everton regularly forced into a deep 4-4-2 defensive block, they prioritised countering forwards with incision and speed. The numbers Liverpool offered in central territory also meant Everton preferring to attack with width, mostly via Andros Townsend and Demarai Gray; Richarlison and Salomón Rondón worked to move in behind (below) to stretch Liverpool and force their back four to retreat, potentially increasing the space for Townsend and Gray to attack into. A lack of support around the ball regardless undermined Everton, particularly when Liverpool's midfielders provided cover against access into the hosts' front two and given Allan and Abdoulaye Doucouré struggled to support attacks from their deep starting positions.

Switching play
On the rarer occasions Everton were attempting to build possession, they mostly continued to target wide territory via direct passes (below) and switches of play. The width provided by Townsend and Gray was, initially, supported by their front two drifting wide and hoping to draw a central defender with them. When passes were played towards one of Everton's wingers, the relevant striker then supported at the second phase, and contributed to potential combinations intended to create opportunities from which to cross towards the other striker. An alternative approach involved forward runs being made from Allan and Doucouré, and them then attempting to support passes played wide. Liverpool's defensive organisation made passes through central territory considerably less promising.

Changing shape...
Their struggles throughout the first half contributed to the adaptation of a 4-2-3-1 for the second. Richarlison withdrew into a position behind Rondón (below) and supported into wide territory considerably less, which in turn contributed to Gray and Townsend moving infield more to seek to combine there. Gray cut infield from the left and attempted to cross towards the far post, and Townsend moved from the right and sought to combine with Richarlison. That Everton's double pivot remained well covered by Liverpool's midfield three regardless meant that they also continued to play directly, but Rondón was regularly isolated against Joël Matip and Virgil van Dijk.

... not once, but twice
Everton complemented their direct play by increasing their numbers in central territory and focusing less on attacking with width. Townsend and Gray continued to move infield, to where they performed similarly to number 10s attacking through the inside channel, creating an in-possession 4-2-2-2 (below) that overloaded Liverpool's midfield three, particularly at the second phase of direct passes. Anthony Gordon replacing Rondòn meant Richarlison becoming the target of their direct play and Gordon seeking to provide support. The changes made contributed to Everton securing possession in central territory in their attacking half, but they continued to struggle to progress beyond Liverpool's back four.

Attacking with width
From their 4-3-3, Liverpool often focused on building into wide territory and around Everton's front two. When Mo Salah held his position wide on the right and drew Lucas Digne, Trent Alexander-Arnold moved infield to provide support; Joël Matip was therefore, when appropriate, encouraged to advance into midfield, in turn leading to Jordan Henderson advancing and often to between the lines, from where he linked play towards the right and also fed Diogo Jota and Sadio Mané. Henderson's advanced position (below) meant he and Jota also combined to release those towards the left, and Henderson reaching a position from which to give them the lead.

Overloads in central midfield
Liverpool's dominance of the ball and creativity also owed much to the overload that existed in central midfield when they were building possession. Henderson's intelligent movements towards the right contributed to them progressing around Everton's front two, particularly on the rare occasions they attempted to press Liverpool's back four; when Henderson drifted wide, Thiago Alcântara withdrew to alongside Fabinho to form a double pivot, occupying Allan and Abdoulaye Doucouré, their opposite numbers. Between them doing so and Salah drawing the attention of Digne, Henderson had increased freedom; should a central midfielder move to take him, Thiago was left free (below), and Jota withdrew into a deeper position to increased their numbers in the centre of the pitch. With Everton's wingers struggling to move infield in time to contribute defensively, Liverpool relished time and space as they built possession.

Threatening from the left
Those towards the left were increasingly influential during the second half. Jota drifted wide from his starting position as their central attacker, and (below) rotated effectively with Mané, and Andy Robertson advanced at an earlier stage from left-back, forcing Andros Townsend to retreat. Thiago also supported their efforts, and did so in the knowledge that Fabinho was continuing to provide cover from the base of midfield. Henderson, as a consequence, played with greater caution. The numbers and quick passing combinations they offered meant them regularly progressing forwards.

Continuing to evolve
When James Milner replaced Thiago in central midfield, he provided cover from behind the advancing Robertson (below) and, by withdrawing into deeper territory, drew Doucouré out of Everton's defensive block. Jota and Mané continued to rotate from between the lines, stretching Seamus Coleman and Ben Godfrey and therefore creating space, and Henderson increasingly made attacking runs through the centre of the pitch to enhance their potential for combinations. With Alexander-Arnold more cautious and mostly remaining alongside Matip and Van Dijk, and Milner regularly withdrawing from midfield, Liverpool's fourth goal came via a combination towards the left that involved the fluid movements of Jota and Mané, and Robertson feeding Jota, who provided the finishing touch.