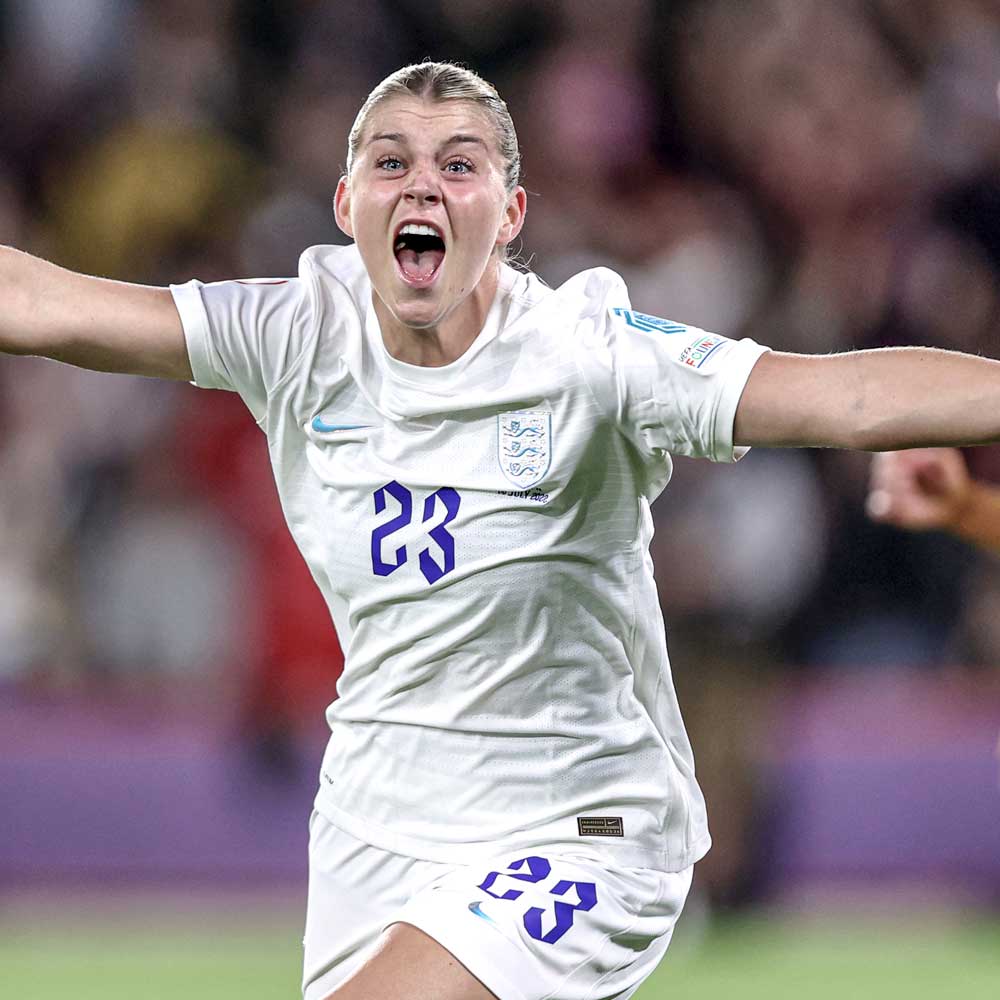 England stormed into the European Championship final with a scarcely believable 4-0 win over the highest-ranked team in the competition. After a shaky start during which goalkeeper Mary Earps was forced into a smart save and Sweden hit the crossbar from a corner, England grew into the game in devastating fashion. The tournament's top scorer, Beth Mead, struck a fine volley to put England in front, before Lucy Bronze headed in a second shortly after half-time. Alessia Russo then scored one of the goals of the tournament – a back-heeled nutmeg – to make it three, before Fran Kirby put the icing on the cake with a late fourth. Afterwards, manager Sarina Wiegman insisted her team was fully focused on Sunday's final and winning Euro 2022.

"We said before the tournament and throughout that we want to inspire the nation," she said. "I think that's what we're doing and making a difference. The whole country is proud of us, and even more girls and boys will want to play football. In the changing room, the music is on and they are dancing. We're happy to make the final, we'll have a little celebration. Then, tomorrow, we will focus on the final."

England set up in a 4-3-3 formation, as Wiegman stuck with the same starting XI for a fifth consecutive European Championship match. Keira Walsh played as the central defensive midfielder, consistently creating opportunities for England to switch the point of attack and play forwards (below). Wide forwards Beth Mead and Lauren Hemp provided width in attack; as the game progressed, they rotated with the central midfielders and adopted positions in the inside channels. Centre-back Leah Williamson looked to drive forward with the ball into the central third, triggering movement further up the pitch.

Sweden adopted a 4-4-1-1 formation out of possession (below), and attempted to make it difficult for England to play out on their right. Centre-forward Stina Blakstenius tried to force England to play down the left or into attempting risky passes to Lucy Bronze on the right. During the first half, Sweden adopted a mid-block and allowed England space to play out from the back.  As the game progressed, though, and with Sweden chasing the game, they were more aggressive and pressed higher up the pitch.

Relationships between the full-backs, Rachel Daly and Bronze, and the wide forwards ahead of them – Lauren Hemp and Beth Mead, respectively – were important in England’s attacking strategy. England played with variety when attacking in wide areas, with the full-back and wide forward playing on different lines (below), creating clear passing angles in the central and final thirds of the pitch. Bronze frequently provided an overlapping option when Mead moved into the inside channel. When England were unable to penetrate through the Swedish block, the high position of their full-backs provided options to maintain possession and change the point of attack.

Mead frequently looked to cross the ball from deep positions (below). This deeper crossing position afforded her the opportunity to place the ball around the penalty spot before the Sweden defensive unit were set in position. England forward Ellen White made a diagonal movement towards goal, aiming to meet the ball at an angle. England were also prepared for the second phase of play, with a player on the edge of the penalty box, who could recycle possession or shoot at goal.

Building from the back

When England were building from the back, Walsh withdrew to support play, creating clear passing lines from the centre-backs and full-backs. When Walsh offered support outside the central channel, she was supported by Stanway, who moved back into a central position but on a higher line. This midfield rotation meant England almost always had a route out from the back.

Rotations on the left

Rotations between the England midfield and attacking units added variety to their attacks, especially down the left. A simple but effective movement involving Daly, Kirby and Lauren Hemp aimed to pull Sweden right-back Amanda Ilestedt out of position. When Daly received the ball, Hemp withdrew and offered herself as a wide option. As Ilestedt moved out towards Hemp, space was created for Kirby to advance into (below). When Sweden’s right-sided defensive midfielder, Filippa Angeldahl, failed to track Kirby’s run, Sweden's right-sided centre-back was left exposed. England’s first goal came from a move down their left that took advantage of this kind of rotation.

Sweden played in a 4-2-3-1 formation, with full-backs Amanda Ilestedt and Hanna Glas adopting advanced positions. This allowed wide forwards Fridolina Rolfo and Sofia Jakobsson to move into the inside channels in an attempt to overload individuals in England’s defensive unit. When the full-backs did not join the attack, the wide forwards adopted wider positions, with the aim of pulling the England defensive line apart and creating space for Kosovare Asllani and Stina Blackstenius to combine in central areas.

Out of possession, England withdrew into a 4-1-4-1 formation. Defensive midfielder Keira Walsh played between the attacking and defensive lines, denying space between the lines for Asllani – a key player for Sweden. Wide forwards Mead and Hemp withdrew to protect the midfield unit and force play wide (below). Remaining patient when out of possession, England adopted a mid-block, forcing Sweden to play over or around them. Particularly in the game’s early stages, there were lots of turnovers as Sweden were crowded out in wide positions.

Exploiting the space behind Bronze

In early stages of the game, Sweden were direct with their approach. They looked to play long balls beyond the England back line, targeting the space outside right-sided centre-back Millie Bright. In what was a frantic start, Sweden looked to play forward before the England defence was organised. Blackstenius moved out wide to exploit the space behind Lucy Bronze (below), who frequently got forward when England had the ball.

Switching the point of attack

England aimed to make it difficult for Sweden to play through them in central areas with a compact out-of-possession set-up. Wide forwards Mead and Hemp dropped back alongside the midfield unit. Sweden looked to counter this defensive shape by using their defensive midfielders to switch the point of attack. When the ball was on the right of the pitch, Bjorn adopted a central position, while full-black Hanna Glas anticipated a switch in play, travelling forward as the ball moved from a wide to central area (below).

Keen to isolate and overload England’s full-backs, Sweden pushed their own full-backs high up the pitch to join their wide forwards, while Asllani was also keen to move across. This shape created overloads and they quickly moved the ball around the full-back – usually Bronze – to exploit any space in behind (below). This exposed the England back line early on, and very nearly led to an early Sweden goal. Ultimately, though, England stood strong and came out well on top.