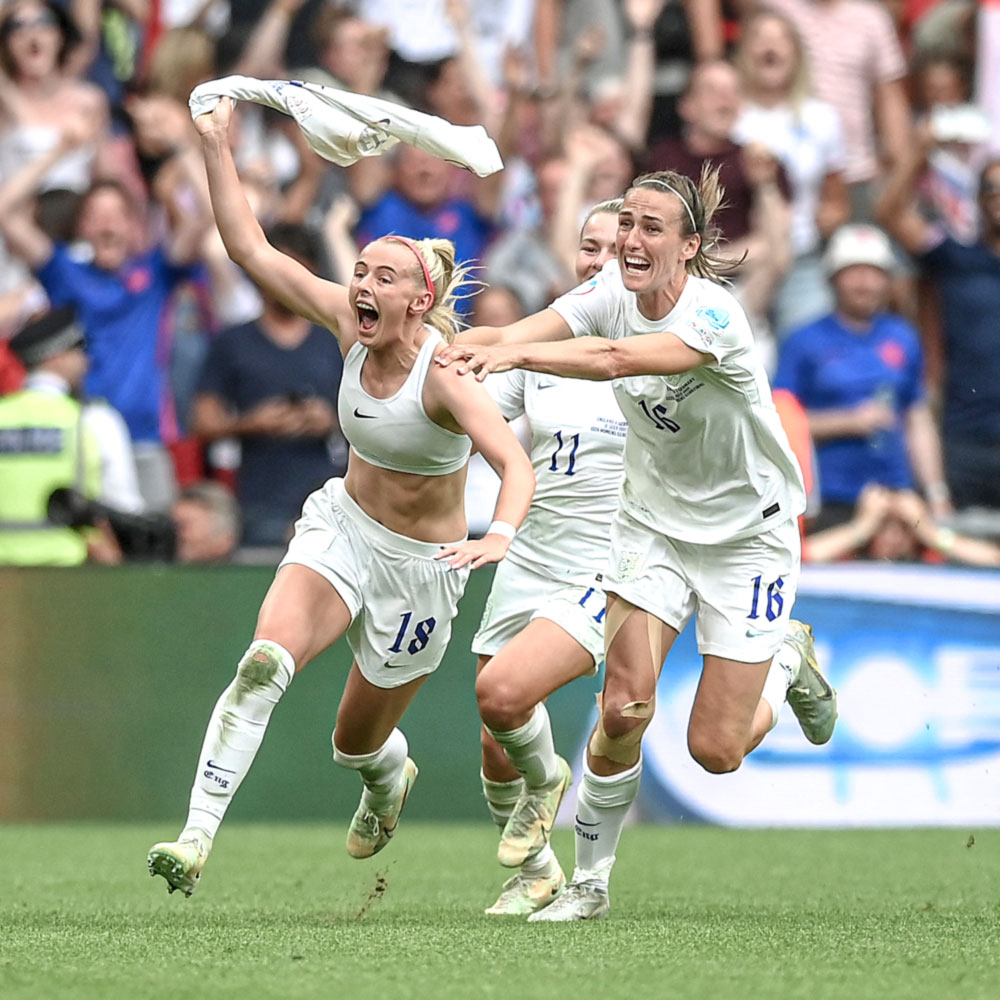 England Women secured their first ever major tournament victory with a dramatic extra-time win over eight-time European champions Germany in the final of Women's Euro 2022. After a tense and closely fought first half in front of a record 87,192 crowd at Wembley, substitute Ella Toone raced on to a Keira Walsh pass to put the Lionesses in front just past the hour mark. The dangerous Lina Magull equalised with little more than 10 minutes of normal time remaining, sending the final into extra-time. There, another substitute – Manchester City attacker Chloe Kelly – bundled the ball over the line from an attacking corner to earn England the trophy with her first competitive international goal.

“The world around us will be changed,” said England head coach Sarina Wiegman, who has now won consecutive Euros with two different teams after leading her native Netherlands to victory in 2017. “It’s positive, but we have to be aware of it too. But we’ve changed society. That’s what we want. It’s so much more than football. We want to win, but through football you can make little changes in society and that’s what we hoped for."

Sarina Wiegman set her England team up in a 4-2-3-1 formation, with Georgia Stanway and Keira Walsh operating as a double pivot in midfield. Beth Mead and Lauren Hemp started as wide forwards, with Fran Kirby playing as the number 10 behind centre-forward Ellen White. Kirby looked to join the attacking line as often as possible, while Stanway pushed into the central and inside right channels when England had possession. Right-back Lucy Bronze often advanced with the ball, disconnecting from the rest of the back four, while captain and centre-back Leah Williamson looked to drive into midfield when England built from the back and were put under no pressure.

Out of possession, Germany withdrew into a 4-4-2 formation, with wide forward Svenja Huth dropping back to join the midfield line, leaving Jule Brand to press on the front line alongside Lea Schüller. This shape gave Germany the opportunity to transition quickly in to attack, with Huth driving into wide areas if not delayed quickly by England.

When pressing England high, wide forwards Huth and Brand took up positions in the inside channels, poised to press the respective England centre-back (below). Schüller looked to force play down one side of the field, by adopting a central position and adjusting her body shape effectively. From here, Germany also applied pressure to Keira Walsh, with the most central midfielder – usually Lina Magull (below) or Lena Oberdorf – travelling towards Walsh during the movement of the ball.

England were keen to exploit gaps left by an expansive German in-possession shape when transitioning in to attack, and encouraged players to travel forward with the ball (below). Williamson advanced into midfield areas if the space was available, adopting a position similar to her more familiar holding-midfield role – but so did the other members of the defence. From there, they looked to play into the spaces between the German centre-back and full-back on either side, for either Kirby or White. These fast transitions also triggered movement from Bronze. If the ball was won on the left, Bronze would look to drive forward in the inside right channel, hoping to connect with Walsh or Stanway as the point of attack was changed.

When sustaining possession in the final third, England looked to lock play in to attacking areas by advancing their full-backs, with the security provided by Stanway and Walsh in midfield (below). White took up a position between the German centre-backs, with the supporting wide forwards Mead and Hemp (who at times in the first half switched flanks) connecting with the respective full-back when play was on their side of the pitch. This aggressive shape forced Germany to withdraw players, and created the opportunity for England to bounce play around isolated players, change the point of attack and slide passes between gaps in the German defensive line.

Targeting the space in behind

Germany were more aggressive as an attacking force in the second half, with more players – notably their full-backs – joining the attack. As a result, England defended deeper and gave Germany more space to play in front of them – which in turn changed how the hosts built their own attacks. The wide forwards did not always withdraw so deeply, which created more room for the England midfield to play on transition and gave them the option to play longer passes beyond the German defensive line. This was particularly threatening when either or both of the German full-backs had failed to retreat after an attack, and ultimately resulted in England’s opening goal when Walsh exploited space across a disjointed German defence to play substitute Ella Toone in to score.

The different threat of Alessia Russo

The second-half introduction of Alessio Russo for White encouraged England to play into the feet of the centre-forward more frequently than they had to that point. As the ball travelled into Russo, England looked to provide support in wide areas, again aiming to exploit space behind the retreating full-backs. Russo made skilful movements across the front of the marking centre-back, maintaining a body shape to protect the ball and encouraging the defender to step away from the back line. From here, England looked to utilise the aggressive attacking play of Bronze on the right in particular to create options wide or back inside.

Creating attacking space on the right

Martina Voss-Tecklenburg set Germany up in a 4-3-3 formation, with Svenja Huth and Jule Brand playing outside number nine Lea Schüller – who made the starting line-up after star striker Alexandra Popp was injured in the warm-up. Huth, and in the second half Nicole Anyomi, would often withdraw to give Germany more numbers in midfield and open space for right-back Giulia Gwinn to advance (below). If England left-back Rachel Daly tracked Huth inside, Gwinn would enjoy the time and space to deliver early balls into the penalty area, or drive infield and towards goal.

When out of possession for sustained periods, England withdrew in to a 4-5-1 formation. Holding midfielders Walsh and Stanway would be supported by Hemp, Mead and Kirby, who dropped deeper to protect central areas of the pitch and make it difficult for Germany to play centrally, thus forcing the ball wide. Centre-forward Ellen White worked tirelessly to dictate play out of possession, taking up positions between the centre-backs and cutting passing lines into midfield.

When pressing in the attacking third, England aimed to reduce space for Germany, remaining compact and utilising the wide forwards to cut passing lines. Wide forward Lauren Hemp would move central from her starting position on the left, with Kirby, Walsh and Stanway remaining compact and outnumbering the opposition before they could build the attack. If England regained possession from this tactical press, they could look left and get Rachel Daly forward to exploit the space left by Hemp’s inside defensive movement.

With England tending to sit in a mid-block out of possession, Germany aimed to play through and around the hosts’ defensive unit. They looked for fast combination play in wide areas, with the aim of isolating pressing players and exploiting the space in behind them. Midfield pivot Lena Oberdorf withdrew between the centre-backs, affording security across the defensive line and creating the opportunity for Gwinn to play higher. Gwinn and Huth would then combine, with the latter often driving at right-footed left-back Daly and looking to play driven cut-backs across the England defence.

Getting in behind Bronze

On the other side, Germany adopted tactics similar to other opponents England faced during the tournament in terms of targeting the space behind Lucy Bronze. If Bronze was in an advanced position when Germany regained the ball on their left, the full-back and closest midfielder would look to combine quickly and exploit the space in behind her. England were alive to this, however, and right-sided centre-back Millie Bright moved earlier to provide cover when necessary. If the ball did find its way through to the German front line, England had to work hard to recover to protect the penalty area and delay any more penetrative attacks. In the end, however, the hosts held on to secure a famous and historic victory on home soil.