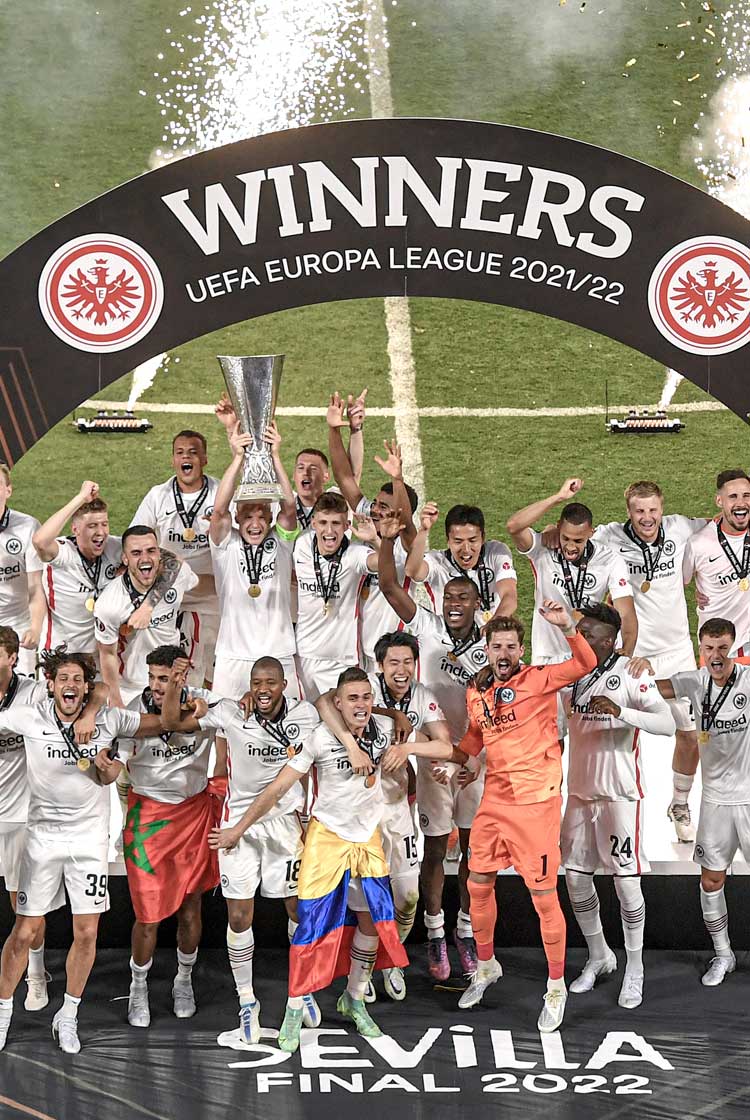 After an historic run to the final, Rangers came agonisingly close to winning the Europa League, but ultimately fell short at the final hurdle. Joe Aribo had put Giovanni van Bronckhorst's team ahead following a defensive mistake from Eintracht centre-back Tuta, but the German side struck back 12 minutes later through Rafael Borré. Tiring legs and the fear of conceding a winner meant two cautious teams saw out the rest of the game and extra-time, before the game went to penalties.  With nine of the 10 penalty-takers successful, Aaron Ramsey's miss from the spot proved crucial, and handed Eintracht their second ever European trophy, and their first since 1980.

"It is a big disappointment because you are so close to winning a trophy but that's also football," said Van Bronckhorst. "If you play a lot of big games, big finals, we will have memories that last forever when you win them but when you lose it will hurt a lot. I lost the World Cup final - the biggest game there is and also a huge disappointment - but we have to move on."

Frankfurt were set up in a 3-4-2-1 attacking shape, and came up against Rangers in a 4-3-3 defensive structure. The wing-backs pushed forward to provide width in attack, with Sebastian Rode and Djibril Sow as the double pivot, linking the three centre-backs to the narrow attacking trio. Daichi Kamada often move infield from his position as the left-sided 10, with Jepser Lindstrøm operating higher in the right inside channel to support right wing-back Ansgar Knauff (below). There was significant space for Filip Kostic on Eintracht’s left, and his battle with James Tavernier proved a key one.

Rangers’ front three pushed up high to press Eintracht’s three centre-backs. The two number 8s then covered Sow or Rode when they dropped, and the German side focused on direct play over Rangers’ first two lines rather than trying to play through the press (below). With both wing-backs high, Eintracht attempted to play into the front three before then trying to win second balls. The two 10s often collected loose balls and Frankfurt were able to establish possession higher up the pitch.

Strong start to the second half

Frankfurt made good start to the second half, following Rangers’ conversion to a 4-2-3-1 mid-block. Initially unable to access their two number 10s, the double pivot of Rode and Sow played into the wing-backs, either with quick, first-time passes to their closest teammate, or through switches of play (below). This helped pin Rangers’ full-backs deep for long periods, and their dangerous number 10s drifted infield to get on the ball in the half-spaces.

Frankfurt created space in the right inside channel when Lindstrøm dragged Calvin Bassey out of position (below). Deeper players then looked to make penetrative passes to find Rafael Borré. Kamada threatened the space in behind as Frankfurt started to have some success in pulling Rangers’ two centre-backs apart. Further support then came from the wing-backs, who stayed wide to create further space in the inside channels.

Eintracht’s front three were much more fluid in extra-time, almost playing like three number 10s with no centre-forward. The width was still provided by the wing-backs, and they were often furthest forward for Eintracht, too (below). Dropping movements from Borré then pulled Rangers’ centre-backs out of position, with opposite movements from the 10s to penetrate in behind. However, Rangers looked more likely to score in extra-time, and Frankfurt appeared physically spent. They held out, though, and secured victory in the penalty shootout.

Rangers used a 4-3-3, up against Frankfurt’s 5-2-3 mid-block. On the right side, Scott Wright moved inside to support centre-forward Joe Aribo, creating space for full-back James Tavernier to overlap (below). John Lundstram dropped out of midfield to cover, protecting against their opponents’ counter-attacking threat. Glen Kamara pushed forward from midfield to support through the left inside channel, working alongside Ryan Kent who held the width on that side.

Direct play down the left

With Rangers struggling to build through Frankfurt’s compact mid-block in the first half, their centre-backs looked to play balls over the top, and predominantly targeted Kent’s runs down the left (below). Eintracht’s first line prevented access through the centre of the pitch, with the wider centre-backs happy to move out to sweep up any balls over the wing-backs. Although Kent regularly made progress from these direct balls, he was often isolated and eventually crowded out.

Numbers in the inside channels

Rangers increased their presence in the left inside channel in the second half, with various players moving out to support Kent. Whenever Rangers overloaded that side, they were able to switch the play out to Tavernier in space. Lundstram dropped out, leaving Ryan Jack as the single pivot, while Kamara and Wright probed between the lines and supported Aribo (below). However, it ultimately took an individual error from Tuta to give Rangers their first clear-cut chance of the game, which Aribo converted to put Rangers in front.

Towards the end of normal time, Rangers converted into a 4-2-4 attacking shape, with Kamara moving forward from midfield, Aribo on the right and Fashion Sakala introduced up front (below). This gave them a stronger attacking presence against Eintracht’s back five, while the full-backs made delayed overlapping runs to support the front four, which pinned back Frankfurt’s wing-backs.

Rangers built with a temporary back three in extra-time, with both full-backs pushing forward and Lundstram dropping into the back line. Substitute Scott Arfield made penetrative runs through the left inside channel on the inside of Kent, adding further presence alongside Aribo through the centre. However, despite putting more pressure on Frankfurt’s back line, Rangers couldn’t find a winner, and were ultimately made to pay when the game went to penalties.