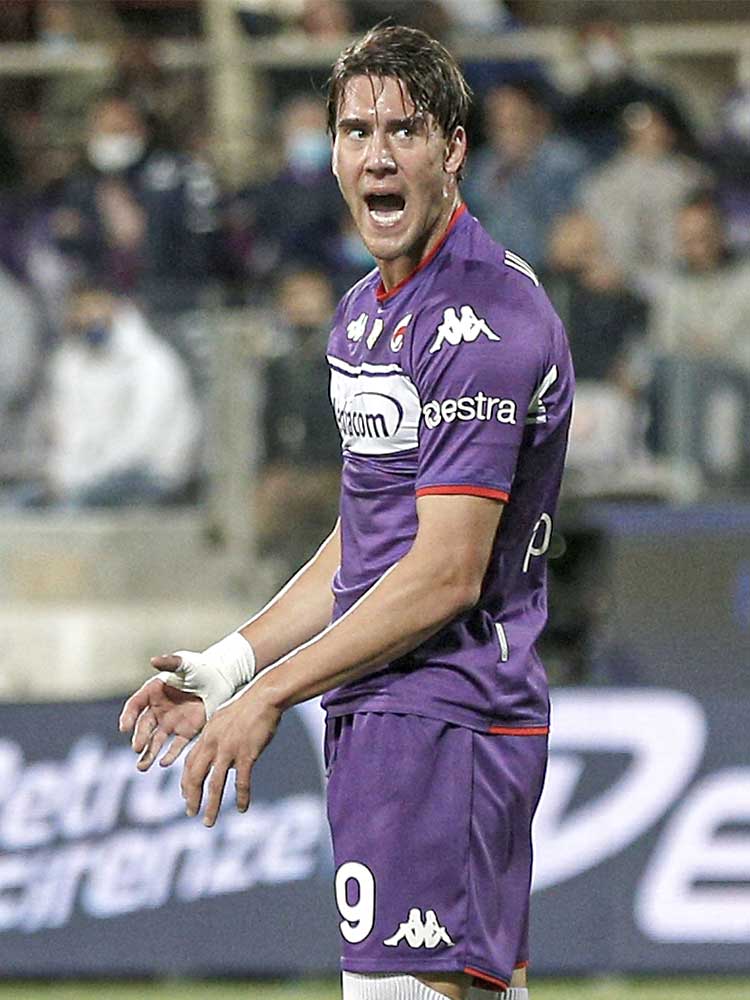 Profile
At a time when Erling Haaland and Kylian Mbappé were establishing themselves as the heirs to Lionel Messi and Cristiano Ronaldo as the world's leading players, Dusan Vlahovic was emerging as a further potential contender. That he then chose to reject Fiorentina's offer a new contract intensified the significant interest he was already generating.

Aged 21 when he did so in October 2021, the Serbia international has earned the admiration of Christian Vieri, once the world's most expensive player and one of the greatest strikers of his generation. "Vlahovic, after Haaland, is the best striker in Europe for his age," Vieri said. "He is a top striker."

Tactical analysis
The left-footed Vlahovic consistently demonstrates intelligent movement to create space for his regular attempts at goal. Should a teammate be penetrating through the centre of the pitch, Vlahovic will move across the opposition's defensive line and away from the ball while ensuring he remains in a position to shoot – a determination to score underpins almost all of his actions.

Double movements (below) – perhaps moving towards possession before bursting away – are also used, potentially when a teammate is advancing in wide territory and seeking to cross. It is regardless less common to see him move away from the ball and then towards it – particularly when he is seeking to reach the penalty area, or is already inside it. In addition to him therefore succeeding in creating increased space from which to finish, it proves more difficult for defenders to cover and block crosses towards him – their need to monitor the in-possession player challenges attempts to also follow Vlahovic as he moves.

It is when seeking to link play or competing in the air that Vlahovic is more willing to move to towards the ball. He intelligently moves wide when doing so, often drawing central defenders with him before linking into those making forward runs. He is similarly willing to drift elsewhere when competing in the air; if receiving to feet, he instead most commonly favours the right inside channel so that he can turn and combine inside and on to his stronger left foot.

Impressive upper-body strength (below), and therefore the ability to occupy opponents and secure the ball before simply and effectively releasing it to teammates, complement his instincts – particularly if receiving direct passes from the defensive third, or providing an aerial threat at set-pieces. When the ball has been secured, he resists progressing it forwards to instead feed teammates who can instead create or carry it forwards themselves.

Vlahovic is also capable of offering a variety of finish. Continuing to mostly favour his left foot and show signs of the single-mindedness that drives the very best goalscorers, he is consistently willing to move, readjust, make sprints, and seek the best possible goalscoring position – often doing so having predicted what will unfold in the next phase of play before his direct opponent has done the same.

He therefore regularly secures an advantage before the time comes to shoot at goal – potentially to the extent he need only provide a predatory striker's finish from close range. When shooting with his left foot (below) he is as capable of calmly placing the ball into the corners of the goal as he is striking across it with power. He can also twist and manipulate his body shape to enhance the accuracy of shots, even if he needs to adopt unnatural positions to do so.

Role at Fiorentina
Vlahovic most consistently features as the central attacker in Fiorentina's 4-3-3 (below), in which he is typically joined in their front three by José Callejón and Nicolás González, ahead of two attacking central midfielders and a single pivot. When possession is being built, La Viola prioritise both the inside channels and rotations through wide territory; their wide forwards retain their width, and their full-backs run inside them to provide access around opposing defensive blocks and into the withdrawing wide forward.

With Vlahovic central and advanced and therefore occupying his opposing central defenders, Fiorentina's full-backs continue to underlap forwards and, with their attacking central midfielders making forward runs, enhance their ability to rotate. Their build-up then focuses on delivering attacking crosses towards Vlahovic – Fiorentina regularly post some of Serie A's highest number of crosses. There are also occasions when their full-backs – ordinarily Cristiano Biraghi and Álvaro Odriozola – provide overlaps when their wide forwards drift infield, when Vlahovic continues to remain advanced, and to offer secondary support around movements in wider territory.

Where throughout 2020/21 direct passes were regularly directed towards Vlahovic – he registered the second highest number of aerial duels in Serie A – they increasingly have an increased grasp of possession and no longer almost solely target the striker, contributing to him instead supporting direct passes into wide territory and switches of play into a full-back or wide forward. It is when possession is built through that same wide territory that diagonal passes are often played back infield into Vlahovic's feet, at a time when he is often subjected to defensive pressure from behind.

His upper body strength regularly makes him capable of resisting that pressure before linking into those making forward runs. When he moves towards the inside channel, the variety of support offered in the form of a run from a third man often proves Fiorentina's most potent method of attack. Varying rotations between full-back, wide forward and central midfielder (below) present Vlahovic with varied support, ensuring he can consistently link play, and potentially under reduced pressure, before attempting to penetrate in behind.

There are also occasions when, instead of seeking to link play, Vlahovic will favour spinning and rolling his opponents before penetrating into the penalty area, and when supporting runs around him therefore represent decoy movements that allow him to isolate a central defender before turning and creating space in which to shoot. When drifting towards the left he can also be seen rolling an opponent before delivering a low cross towards the wide forward, full-back and central midfielder attacking infield from the right.

If instead withdrawing into deeper territory, Vlahovic is likelier to instead advance in behind off of a second movement – perhaps when he is short of support or movement from teammates around the ball. He will continue to draw his opponent towards possession to create increased space in behind before bursting forwards to receive a through ball, hold off his opponent, and then play a low cross or shoot.