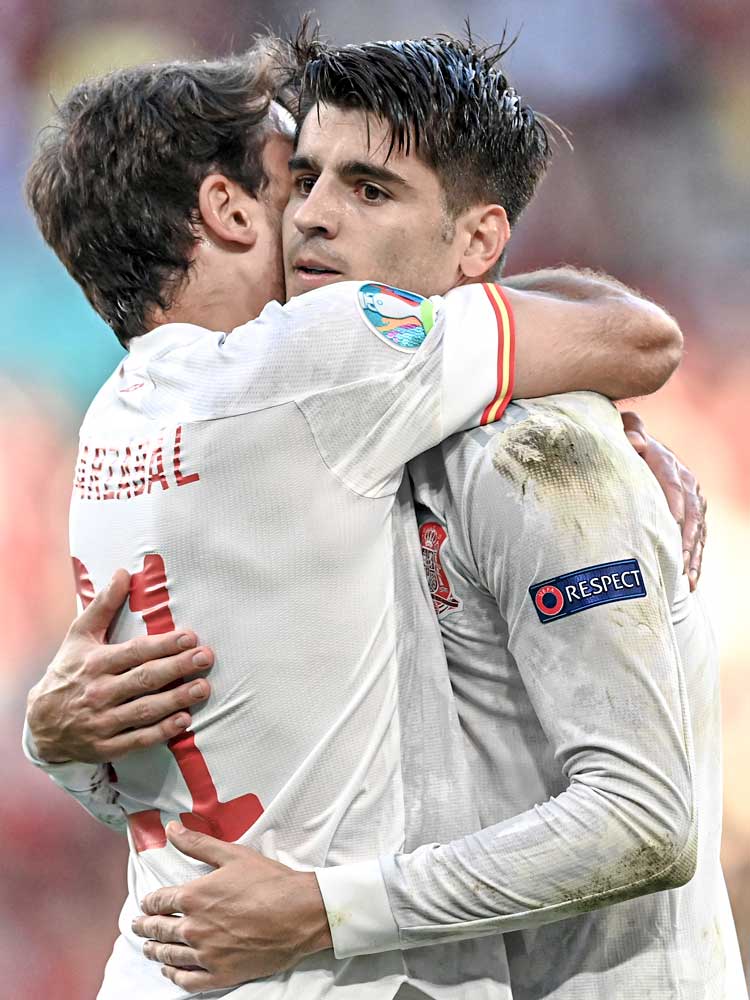 Spain progressed to the quarter finals of Euro 2020 by beating Croatia in extra time of a thrilling affair. At 3-1 up with little over five minutes of normal time remaining, having recovered from Pedri’s unfortunate own goal via finishes from Pablo Sarabia, César Azpilicueta and Ferran Torres, they were sent to extra time by headers from Croatia's substitutes Mislav Orsic and Mario Pasalic. The talented Álvaro Morata, who revealed his family had been threatened as a consequence of his inability to score during the group stage, then recorded his first goal of the tournament, and one of its finest, by controlling Dani Olmo's cross and powerfully volleying in. Mikel Oyarzabal's stike just minutes later restored their two-goal advantage and secured victory. "We gave up the lead, we drew and from there, I saw that we continued to generate chances," said their manager Luis Enrique. "The game was crazy from 80 minutes and these 10 minutes are a good thing. "It has been a game of emotion. I don't think I remember a game where, five minutes from the end of extra time, both sets of fans stood up and applauded. It has been an epic game." His opposite number, Zlatko Dalic, said: "We have nothing to be ashamed of. We made some simple mistakes which you can't afford against the likes of Spain because they will punish you. But it's part of growing up even though up it cost us a quarter-final berth."

Zlatko Dalic set Croatia up into a 4-3-3 formation built on the midfield three of Marcelo Brozovic, Luka Modric and Mateo Kovacic. Their opponents, Spain, defended with a 4-5-1.

Despite the ability they possess in midfield, it took a considerable length of time before they proved capable of creating periods of possession, and largely because Modric was required to defend from such deep territory. When they first threatened, they did so after regaining possession and then targeting the spaces behind Spain's full-backs after they had advanced to attack.

Spain, regardless, impressively recovered their defensive positions. Croatia's lack of pace contributed to them doing so; they instead countered more effectively when Modric and Kovacic offered an additional passing option in midfield that meant possession being worked infield and away from those recovering into defence. The willingness of Nikola Vlasic and Ante Rebic to move infield to contribute to combinations or even shoot on goal complemented that.

On the rarer occasions Croatia attempted to attack against a set defensive block, Rebic's variety and dribbling ability towards the left, and his willingness to attack around César Azpilicueta, proved their most potent threat, but was eventually undermined by both Koke and Ferran Torres withdrawing to defend, and Croatia's inability to switch play towards the right when they did. Bruno Petkovic's struggles to secure direct passes into his feet while shielding the ball from Spain's central defenders also meant him withdrawing into deeper territory, and Rebic and Vlasic moving infield.

The own goal Spain conceded transformed the momentum of play. When Spain recovered their composure and the pressure they were applying, Croatia relied on countering towards the left via Rebic, forcing Azpilicueta to defend from deeper territory, and reducing his potential.

Andrej Kramaric replacing Petkovic, and his more instinctive and intelligent positioning, complemented the runs infield being made by Croatia's wide forwards, and contributed to them attempting more switches of play and progressing possession via Josip Juranovic. Those switches also meant them occasionally resisting Spain's higher press. Direct passes into wide territory helped Croatia to progress into midfield, but when they did so Spain's full-backs advanced or their central midfielders moved wide to cover, so Croatia's wide forwards moved infield earlier to pursue flick-ons and to discourage their opposing full-backs from advancing.

Spain's more direct off-the-ball runs meant play becoming increasingly transitional. Both teams pressed with aggression and played more passes in behind their higher defensive lines. Croatia continued to pose more of a threat from the left, via Rebic, and during extra-time they sought to create opportunities from which to cross, as they had when scoring their equalising goal. Kramaric withdrew away from Spain's defence, and Croatia's wide forwards and central midfielders advanced into the penalty area. Modric's influence from a deeper role ensured that they continued to build with confidence against Spain's press before possession was worked wide.

Spain were organised by their manager Luis Enrique into a 4-3-3 formation led by the front three of Pablo Sarabia, Ferran Torres and Alvaro Morata. Their opponents, Croatia, defended with a 4-2-3-1.

Similar patterns existed towards the left, but without Busquets being required to contribute. José Luis Gayà overlapped as Sarabia moved infield and Pedri withdrew to cover them, similarly to how Busquets or Koke performed on the opposite side of the pitch. Pedri's movements limited the freedom of Luka Modric, and contributed to Croatia being forced to defend with a 4-1-4-1 from deep in their defensive half and Aymeric Laporte advancing into midfield with the ball at his feet, in turn freeing up Pedri to advance to between the lines, where he was often fed by Busquets. Pedri created their first goalscoring chance when he slid Koke in behind, before his misfortune in scoring their own goal.

Ferran and Sarabia retained permanently wide positions against Croatia's deeper defensive block and, against Croatia's potential on the counter, their full-backs' positioning became more cautious, undermining the rotations Spain had been offering and forcing their front three to attack while outnumbered. It took the potential of Ferran and Sarabia, when attacking one-on-one, to create opportunities from which to cross, so Pedri and Koke instead offered forward runs through the inside channels that were less congested as a consequence of Ferran's and Sarabia's width. They continued to do so during the second half, when Morata also withdrew into midfield to receive from and link with Busquets.

Pedri and Koke also started to make runs in behind when Croatia began to defend from slightly higher territory and increasingly press Spain's back four; Morata would also withdraw further to link play into them or towards Ferran or Sarabia, often doing so when Modric advanced to defend from alongside Croatia's central attacker. Croatia's defence was, as a consequence, forced to move into narrower territory, increasing the freedom of Spain's wide forwards, as was demonstrated with Azpilicueta headed in from Ferran's cross. The increased spaces behind Croatia's defence meant that those wide forwards continued to offer significant potential, and that direct passes in behind continued to create goalscoring chances.

In extra-time Spain continued to play with width, but without the same urgency to play forwards. If that led to Croatia building momentum, it also led to more patient attacks. Dani Olmo, attacking from the right, was less suited to running in behind, but his two superb crosses led to their fourth and fifth goals.