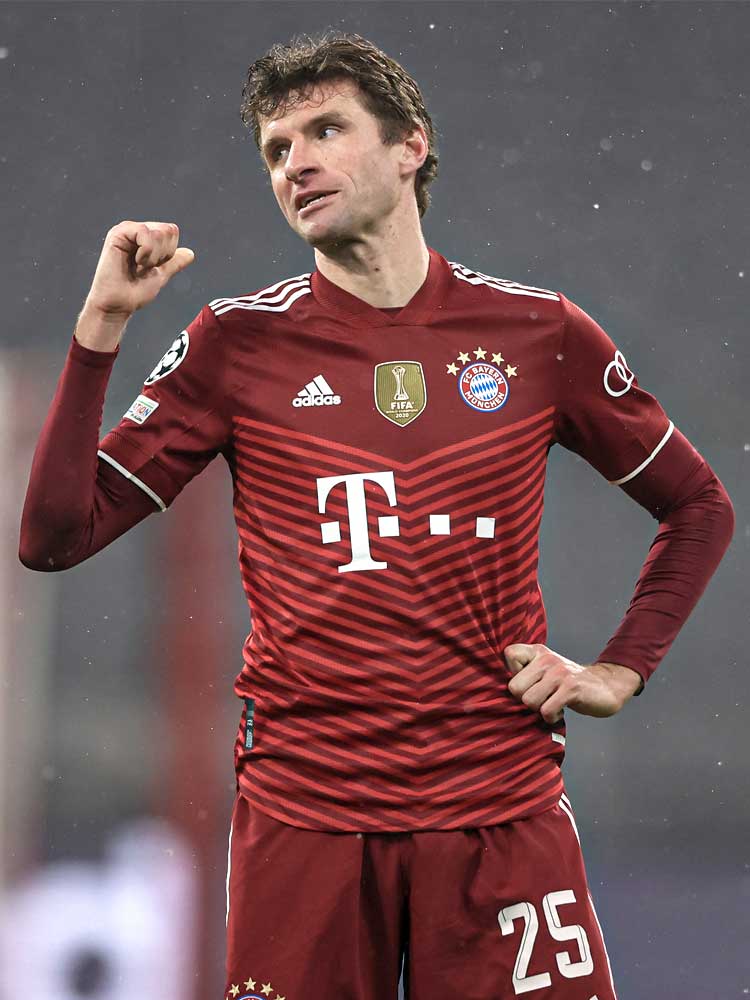 Barcelona became the biggest casualties of the group stages of the Champions League when a convincing defeat at Bayern Munich consigned them to a drop into the Europa League. Bayern's victory was secured by first-half goals from Thomas Müller and Leroy Sané, and Jamal Musiala's in the second. They finished top of Group E with maximum points, and are joined in the last 16 by second-placed Benfica. Dynamo Kiev finished bottom.

"It is important that we played to a shut-out," said Bayern manager Julian Nagelsmann. "That is always chalked on us a bit. We conceded three goals in the group phase, scored 22." His recently appointed opposite number, Xavi, said: "Bayern dominated us. We always want to dominate but it was the opposite here. We must demand more. This must be a point of inflection to change the dynamic and many more things."

Sané's movement
With Barcelona using a 4-4-2 to press Bayern Munich in possession, Leroy Sané moved infield from his starting position wide on the left, to encourage Alphonso Davies to advance from left-back. Bayern's double pivot of Corentin Tolisso and Jamal Musiala was aggressively marked, so Sané offered an extra body in midfield (below) to enable play through or around the Barça press. Further forward, Thomas Müller – operating as a number 10 – moved to provide an option between the lines and receive more direct passes played over the midfield.

Versatility in their 4-2-3-1
As Sané continued to move infield and Davies to overlap from left-back, Müller and Robert Lewandowski often combined as a front two. Both looked to play between the Barçelona full-backs and central defenders, while Kingsley Coman supported from wide on the right. The double pivot formed by Tolisso and Musiala supported behind Sané when he moved inside (below). Through this shape, Bayern were able to play both around and through the Barcelona midfield block.

Between the lines
Bayern attacked with much more aggressive runs and movements in the second half. Musiala advanced more regularly than in the first, while Sané continued to drift infield and play almost as a number 10. This encouraged Müller to drift to the left inside channel (below) and support Davies, leaving Lewandowski as the central striker. Coman worked around Musiala, with Tolisso providing defensive cover and support as a temporary single pivot.

Attacking rotations
Bayern had reduced presence between the lines when the defensive midfielders held their position to maintain defensive security. With the visitors prioritising Musiala and Tolisso, Sané enjoyed more freedom coming in from the left, while Coman also moved in from the right to attack the spaces between full-back and central defender (below). This allowed the versatile Müller to adopt a position wide on the right, in front of Benjamin Pavard – the right-back was more reserved as an attacking threat, largely because of the transitional threat posed by Ousmane Dembélé. When Coman moved far enough inside to offer a threat centrally, Lewandowski sometimes drifted a little wider himself.

Targeting Depay
Bayern aggressively marked Barcelona's talented midfield three of Sergio Busquets, Frenkie De Jong and Gavi, making it difficult for them to link play from defence. Memphis Depay's movements to receive direct passes (below) therefore gave the visitors an alternative route forwards. He adopted positions around Bayern's defensive midfielders, and then looked for direct runs in behind from wide attackers Ousmane Dembélé and Sergiño Dest. Despite this, Barcelona regularly lacked numbers in the final third.

Struggling against the Bayern press
Bayern adapted their press to force Barça in one direction when they were attempting to build possession. Against that, Depay continued to withdraw into deeper areas (below) to receive direct passes. Bayern continued to press from their 4-2-3-1 shape, but shifted infield to provide further cover in central midfield. This freed up one of Corentin Tolisso or Jamal Musiala to cover passes into Depay, and to join one of the central defenders in pressing him. Barça therefore attempted longer passes into their wide forwards, but continued to lack support and quality in the attacking half.

Offering improved support
Gavi played more towards the Barca right in the second half, with Nico González introduced to feature alongside him in midfield (below). Their rotations improved Barça's options between the lines and away from Bayern's double pivot, while De Jong dropped alongside Busquets. Both Barça full-backs provided support in wide areas, with Depay or Dembélé operating in the left inside channel, ahead of De Jong.

Reorganising into a 4-2-3-1
Xavi reorganised the Barca shape into a 4-2-3-1 shape, with Gavi and Dembélé often the most advanced attackers from the flanks. Depay had the freedom to withdraw into the left inside channel, and create potential overloads against the Bayern central midfielders. González's support in the right inside channel also gave them the option of creating a midfield box, and therefore improved spells of possession. Busquets dropped into the defensive line (below) to encourage the full-backs to advance and support their wide forwards at an earlier stage of their attacks. They still struggled to threaten in the final third, however, and ended the game well beaten.