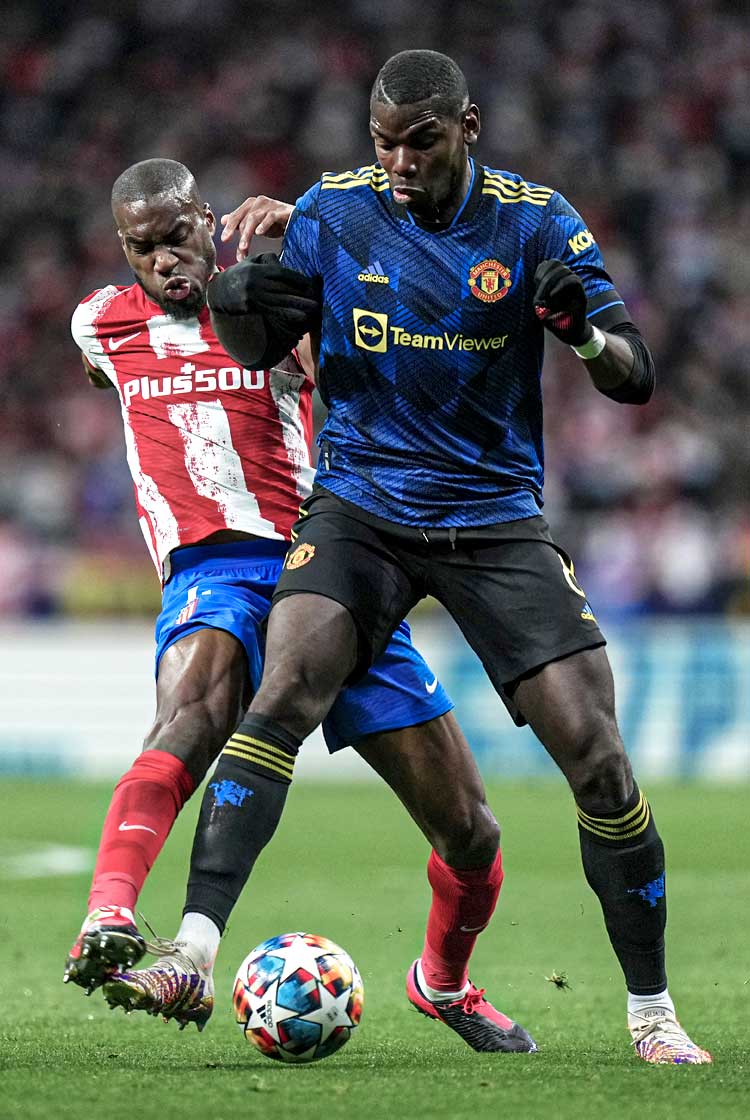 Anthony Elanga struck 10 minutes from time to earn Manchester United an away draw in the first leg of their Champions League round-of-16 tie against Atlético Madrid. Diego Simeone's side had taken the lead early on through João Félix, after which they sat back and defended their lead. United created little in the first half, but came out with a more attack-minded approach after the break and eventually scored, to leave the tie finely poised ahead of the return leg at Old Trafford.

Simeone says he expects far more from his team's opponents in the second leg. "In front of their fans, they will probably play with more verticality and drive than they did today," he said. His opposite number, Ralf Rangnick, said his gameplan went "in the bin" after Félix's early opener. "After seven minutes we were 1-0 down and the plan was in the dustbin," he said. “What we played in the first half I still cannot believe. We played without conviction, without aggression and that is why we were struggling.”

Atlético Madrid set up in a 3-5-2 formation in possession, with their width provided by wing-backs Sime Vrsaljko and Renan Lodi. Ángel Correa and João Félix looked to stretch United with at least one of them playing on the shoulder of the last defender, pinning United's defence back and creating space centrally (below). In midfield, Marcos Llorente operated as more of an attacking midfielder on the right side, frequently making penetrative runs in the right half-space when Luke Shaw was dragged out towards Vrsaljko. This would then draw Harry Maguire out from his central position. One of the key benefits of this shape for Diego Simeone’s side was the great counter-attacking structure it provided when springing from a 5-3-2 out-of-possession shape into a 3-5-2.

One of Atlético’s key strengths was their management of transitions, both attacking and defensive. The shape that Simeone selected caused United problems on the break throughout the game. With Atlético guiding United into wider areas when the visitors had possession, they were able to set a trap to regain the ball and immediately have diagonal passing options available (below). The positioning of the forward players and wing-backs allowed their attacking transitions to continue at pace. However, a lack of quality in their decision-making and execution in the final third meant that these counter-attacks failed to yield good-quality chances.

Atlético's best player on the night was central midfielder Geoffrey Kondogbia. He anchored the midfield, providing a pivot through which Atlético could build while also giving security behind the ball when his team attacked. With Atlético playing with high and wide wing-backs as well as two forwards, this central pivot was crucial to retaining the side's shape. Kondogbia regularly managed to receive the ball beyond United’s first line of pressure before then looking to advance play further (below). He achieved this through penetrative passes, diagonal passes and by driving with the ball.

Progress down the left

Atlético's left side provided their main route forwards for the majority of the game. Simeone would have identified this area when they saw the team sheet and the news that Victor Lindelöf was playing at right-back for United. Part of Atlético’s threat on this side was the fact that they had two natural left-backs playing as left wing-back and left-sided centre-back. The natural tendency of these players to get forwards led to overloads. Reinildo had to be slightly more cautious than Lodi, but provided there was enough protection in the middle of the pitch from Kondogbia and another player, Reinildo was free to advance forwards. Atlético’s threat out wide led to three of the four full-backs United used on the night ending up with yellow cards.

Manchester United used a 4-3-3 shape in possession, and came up against Atlético’s 5-3-2 out-of-possession structure. United knew it would be easier to progress out wide and that central penetration would be extremely difficult to achieve against a Diego Simeone team. As a result, they needed to ensure that they never lost their width when they had possession (below). Atlético used their outside central midfielders to help engage opponents out wide, so moving the ball to one side before recycling and switching play quickly was a route that United looked to exploit. United had to be extremely patient in possession, particularly after Atlético had taken the lead and dropped back.

Attempts to progress out wide

United tried to move their best technical midfielders out wide to get on the ball and help progress play down the flanks. Fred generally stayed in the middle of the pitch, while Bruno Fernandes and Paul Pogba alternated between taking up a false full-back position and running forward into attacking midfield. The false full-back position was designed to entice Atlético's outside central midfielder or wing-back out wide, while United’s full-back could then push up to join the winger and create a 2v1 on the outside (below). In the first half, this led to lots of possession, but United struggled to progress further up the pitch. United caused Atletico very few problems and finished the half with just 0.05 xG.

Atlético had just two players in the first line, so United used one of the players in their defence to advance possession and then add an additional number in midfield. Usually, this was Raphaël Varane (below), who would step out with the ball and try to commit an individual from Atlético’s midfield to free up space for another teammate. The role of Fred (and later Nemanja Matic) was important in this. Fred would either position himself between Ángel Correa and João Félix in order to squeeze them together and provide more space outside for Varane, or drop between Harry Maguire and Varane to create a 3v2 and push the full-backs push into the next line of attack. This had proved a successful route forwards in the win over Leeds on Sunday, and was again used by Rangnick's men at the Wanda Metropolitano.

United were poor in the first half, and simply didn't have any solutions to breaking down Atlético’s block. The second half saw a big improvement in both the speed of their play and their quality of movement. United were more daring with their passes into central areas, and the full-backs and wingers were given licence to advance further (below). United's players started adopting a ‘play forward, run forward’ approach. Ronaldo started coming short to get involved and give the opposition a decision to make as to whether to follow him. Of course, this wasn’t just an all-out attacking mentality, as United still had their shape behind the ball with Fred or Matic, and Maguire and Varane plus either the opposite central midfielder or full-back ensuring there were four players behind the ball. The change in approach was entirely necessary for United to gain a foothold in the game, and they managed to stay higher up the pitch for longer periods. This led to more access into the final third and eventually to Anthony Elanga's equaliser.