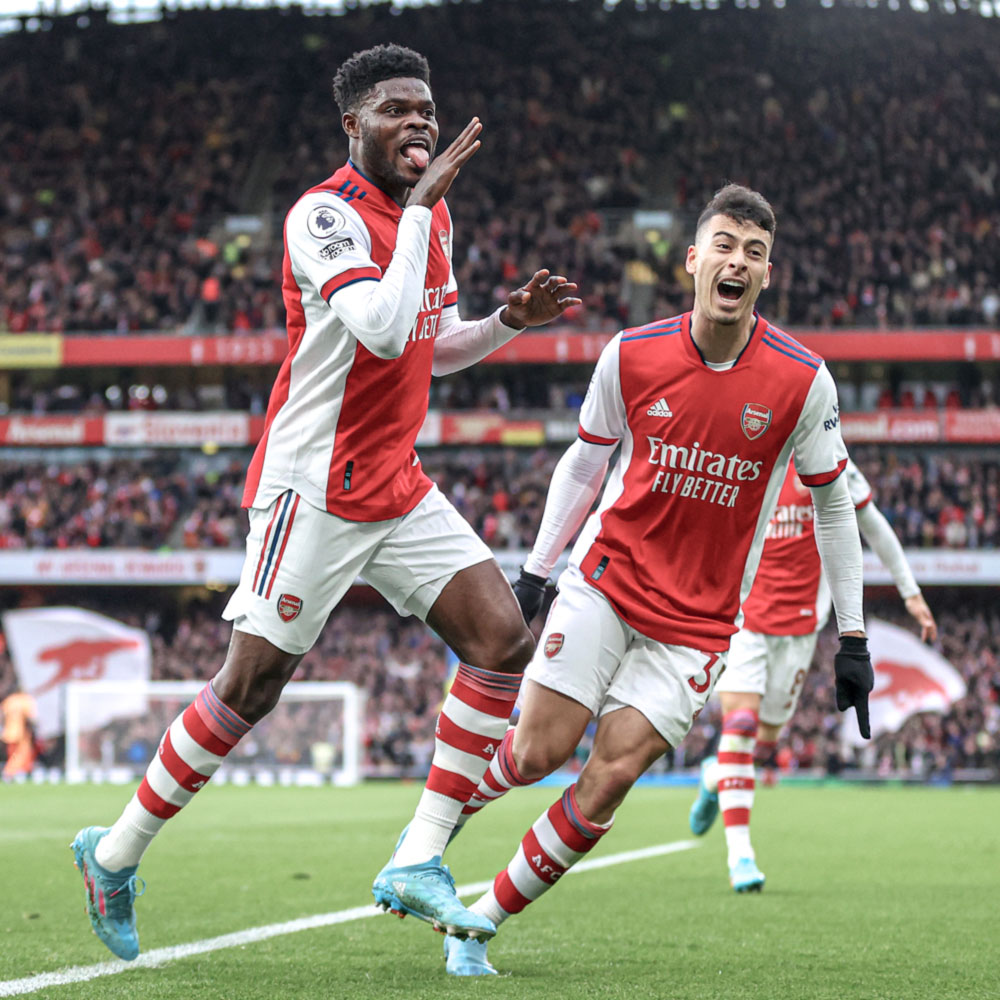 Arsenal took another step towards Champions League qualification with a routine home win over Leicester City at the Emirates. The visitors proved their fragility at set-pieces yet again, as Thomas Partey rose to head home Gabriel Martinelli's near-post corner early on. Partey later hit the crossbar with a curling shot, while Harvey Barnes forced an excellent save from Aaron Ramsdale before Caglar Söyüncü was penalised for handball just before the hour. Alexandre Lacazette scored from the spot to secure Mikel Arteta's men a fifth consecutive Premier League win; three points moved the Gunners back into the top four, one point ahead of Manchester United with three games in hand.

"We have to be there; we should be there," said Arteta after the game, on the club's Champions League ambitions. "Our history obliges to be there, but we are not there yet and there are still a lot of games to play. We have an excellent group of people at the club who believe in what we do. Then you have to put performance into results. The last few months, we have been more consistent."

Leicester manager Brendan Rodgers bemoaned the penalty decision that he felt cost his team: "We have seen so many decisions with VAR and things that have gone against us this season in similar situations. Cags is reacting, he is moving his body, he can't move his body like a mannequin and have his arms straight down. Hugely disappointing."

Mikel Arteta set his Arsenal team up in a 4-2-3-1 formation against Leicester’s 4-4-2 defensive block, but central movements quickly changed the shape of the hosts’ midfield. Alexander Lacazette dropped into midfield from his starting position as the number nine, while wide attackers Bukayo Saka and Gabriel Martinelli held very wide attacking positions. Martin Ødegaard started as the number 10 but looked to move across into the right inside channel, creating space for Lacazette to drop into. Thomas Partey moved central to become a single pivot, operating in between the central pair in Leicester’s first line of pressure. This allowed Granit Xhaka, who started alongside Partey in the double pivot, to take up a position in the left inside channel, often moving higher to support Martinelli’s direct forward runs (below). Arsenal’s wrong-footed wingers naturally looked to cut inside where possible, using Xhaka and Ødegaard to create incisive combinations.

Both Ødegaard and an advanced Xhaka were particularly influential in the hosts’ attacking play. Xhaka combined well with Martinelli, especially when the winger held his position closer to the touchline. As Martinelli gradually moved inside off the ball, working ahead of a withdrawn Lacazette, Xhaka moved wider to combine with left-back Kieran Tierney. Ødegaard had more penetrative passing options available from his position in the right inside channel; and, being left-footed, he could disguise passes back into dangerous central areas (below). His ability to twist and receive under pressure, before breaking through Leicester’s midfield with clever passing, was key to Arsenal’s play in the final third.

The visitors converted into a 4-4-2 shape when defending, and showed more intent to press in the second half. The front pair worked on to Arsenal’s centre-backs, while the wide midfielders pressed the full-backs. In midfield, Arsenal had a 3v2 overload and made use of this by quickly combining, usually through Partey, before finding their wingers, who continued to hold high positions and pin the Leicester back line. The visitors’ initial solution saw the winger on the far side move into midfield. This extra central presence allowed the Leicester central-midfield pair to deal with Partey, and the closest number eight. In response, Lacazette increased his dropping movements – either to receive as another central midfielder, again overloading Leicester, or to then make another forward run and free Partey to receive (below).

The dangerous left and a front two

Arsenal’s left side proved most effective in the second half. With Partey continuing to offer central protection as the main pivot, Xhaka took up a more covering position. This allowed Tierney to overlap wide, while Martinelli carried the ball inside to threaten Leicester’s back line. Lacazette and Saka both drifted left, giving the dangerous Martinelli more options in the left inside channel. Ødegaard took up more central positions, where he could support and connect with what now looked like a front two for Arsenal (below).

Brendan Rodgers set his Leicester team up in a 4-4-1-1 shape against Arsenal’s 4-4-2 defensive structure. In the early stages, however, the visitors struggled to break through or around their opponents’ aggressive high press. Arsenal’s wingers and full-backs pressed on to their direct opponents on both flanks, while the centre-backs also looked to push into the Leicester half. This gave James Maddison, who started behind lone striker Kelechi Iheanacho in the number 10 position, very little time or space to influence his team’s play (below). This also allowed the Arsenal midfielders to put pressure on Nampalys Mendy and Kiernan Dewsbury-Hall in the Leicester midfield.

The visitors started to look for more direct routes into wingers Harvey Barnes and Marc Albrighton, which forced Arsenal into a mid-block from their initial high press. The longer passes didn’t always find their targets, but they did succeed in helping Leicester gain territory and build attacks inside the Arsenal half. With more possession, they looked more effective through rotations on their left side; Barnes held his width, while left-back Luke Thomas pushed forward inside (below) and combined to some effect. Dewsbury-Hall covered in behind, alongside Mendy, while Albrighton occasionally swapped with Maddison on the right – albeit to limited effect.

Rodgers changed to a 4-3-3 attacking shape in the second half, with Dewsbury-Hall higher and Maddison now operating in the right inside channel. Barnes and Albrighton held their width as Leicester continued to build around the Arsenal block; they worked to draw the full-backs away from the back line before looking for the number eights to make forward runs into the spaces they had vacated (below). The more numbers Leicester committed forward, though, the more Arsenal enjoyed opportunities to counter-attack.

Arsenal dropped into a more withdrawn block once Lacazette had doubled their lead from the penalty spot, leaving Leicester to continue pushing forward in their 4-3-3. Barnes continued to hold his width on the left, encouraging Dewsbury-Hall to make forwards runs in the inside channel. On the right, however, Albrighton narrowed to allow overlapping runs from Ricardo Pereira and later James Justin from right-back. The result of this, however, was Maddison dropping deeper (below) – this contributed to a lack of balance in the visitors’ attacks, while also taking their most creative threat further away from the Arsenal goal than he would have liked. In the end, Leicester didn’t do enough to get back into the game, as the hosts cruised to a fifth consecutive league win.