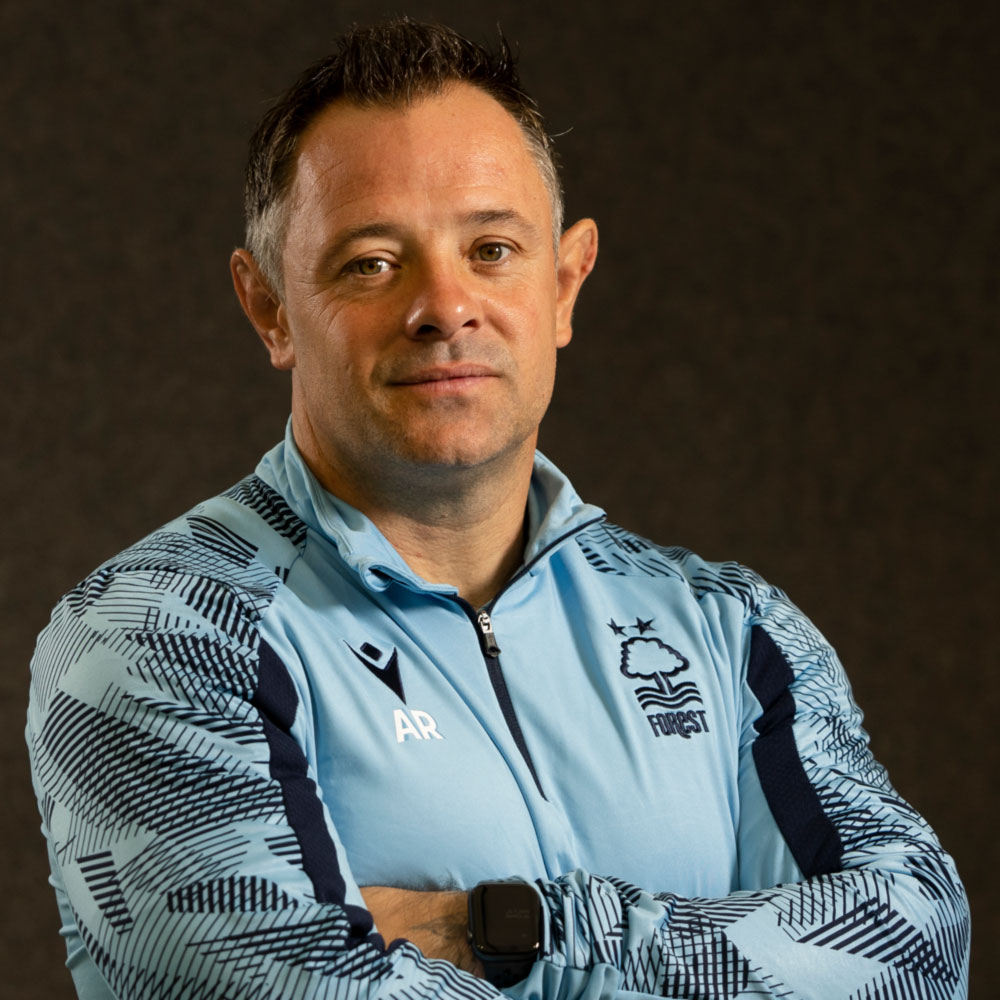 When I stopped playing, I wasn’t in a position to go straight into coaching. I had to figure out where and how I needed to start.

I’d been involved among the coaches at Nottingham Forest under Paul Williams. Although I learned loads from being in those conversations with the staff, and their sessions – not looking at everything as a player – I didn’t do all that much.

I was doing quite a bit of media work, but I realised I still wanted to be in football. So, after I officially retired from playing, my plan was to have a bit of a break, gather my thoughts and go into some coaching environments to learn.

It was after that break that I realised I was quickly being forgotten about. At times your playing career counts for a lot, but football quickly moves on.

I had to start thinking about what I needed to be doing – sorting my CV, finding out how I needed to apply for jobs, what a cover letter should look like, what people are looking for, and what type of coach I wanted to be. If you’re in an interview and you don’t know what you’re about, it’s going to be very difficult for a chief executive or manager to give you a job.

I probably expected to have more opportunities off the back of my playing career, so it was an eye-opener. You probably have a slightly inflated opinion of yourself: “It’s alright, I’ll get a job.”

But there’s not an awful lot of jobs, and there are a lot of coaches. Every year, too, more players are retiring and becoming coaches.

Towards the end of my playing career, I should have gone knocking on some doors, asking to do some sessions with the club’s academy. I say it to some players now: “Come and do a session with my boys.”

I had to ring Ruud Dokter – who was the FAI high performance director at the time – to tell him I wanted to do some coaching, and ask if there were any potential positions with them. There was an opening that involved working with the Ireland under-age teams for travel expenses, which was perfect for me.

I went in with the Republic of Ireland Under-18s, who were then managed by Jim Crawford. He and his assistant, Denis Hyland, were absolutely brilliant for me. For six months I got a lot of hands-on experience and some really good insights, until my break came.

Stephen Kenny took over the Ireland Under-21 team, and took Jim as one of his assistants. So I applied for Jim’s job, and found myself being interviewed for the first time in my life, by Ruud. I had to put a presentation together, so it was pretty nerve-racking, but it was also fantastic experience. Ruud’s decision to give me the job was massive for me, and made me really proud.

I not only felt like I was finally getting somewhere, but also that I was going in somewhere I could learn. There were a lot of things I was way off the mark with, and that was something I was very aware of. I had to learn a lot on the job, and speak to a lot of people.

"just as you feel you're finding the sweet spot, the trip comes to an end. i struggled with the limited time on the grass"

Denis became my assistant, and I really couldn’t have done it without him. Mick McCarthy (below) and Stephen, as senior team and Under-21 managers, were both very good to me as well. On reflection, I wish I’d also rang Paul Hart, Brian Kerr, Jim Crawford, Stuart Pearce and others a lot more. They were always very forthcoming – I should have made more of their experience and their skills.

That job allowed me to figure out what type of coach I am, and to understand the importance of the relationships I built with players. Not just because you want them to play for you, but because you need to know them as people. You need to know how they learn and what they’re going to respond to.

So much of it was trial and error. Having a role in international football came with positives and negatives, and meant I quickly realised I had to learn to become organised. I needed to learn how to do itineraries, how to structure the days we were away, how to structure the sessions, and to oversee the travel. It was a brilliant learning curve.

But you go away for a week, 10 days, or two weeks. Just as you feel you’re finding the sweet spot, the trip comes to an end and you might not meet up again for another couple of months. More than anything, I struggled with the limited time on the grass.

We didn’t have everything we needed all of the time, in terms of equipment and infrastructure, but I saw it as a challenge to work within those parameters. It made me adapt and think quickly to remain in control and deal with situations when they were put in front of me. It helped that I was working with really professional people who often had to make the most of difficult circumstances.

After every camp, there were managers’ meetings at which the coaches of every age group came together and did a presentation on the camp that had just finished. For my first camp, we’d been away to Turkey. We lost the first game 4-0, then played them again a few days later and drew 0-0, so my presentation was on what I’d done differently between the two games. Presenting that to those experienced managers was another great experience.

"chris was always in before me and one of the last to leave. his work ethic was second to none"

Chris Cohen, a former Nottingham Forest teammate and good friend, and Gary Brazil, the academy manager, knew I’d been working with Ireland. They also knew about my frustration at not working on the grass every day. I’d been with Ireland for two years when they were looking for an assistant with the Forest Under-23 team; they invited me to do it around my commitments to Ireland and scouting.

We worked really well together. I was still living in Nottingham, and I had a fantastic time getting the best of both worlds. This role gave me the time I wanted on the grass, while with Ireland I was operating a head coach.

Chris Hughton (below) soon became first-team manager. It didn’t work out for him at Forest, but he gave me some fantastic advice and access – everything I needed. And he was always, always there.

After six months, Chris Cohen left and I took over the Under-23s. I made sure I got in before 7am every day, to give myself as much time as I could to get organised. Every morning, Chris Hughton was in before me, and he was also one of the last to leave. His work ethic was second to none.

I essentially had a four-month audition to succeed Chris Cohen and work day to day as a head coach instead of an assistant, because the club still wanted to interview other candidates – which I understood. My responsibilities changed, which meant showing a different side of myself, so I was really proud when I was offered the position permanently. I also then had to step away from Ireland.

I continued to work a lot with Gary Brazil, the academy manager, and Jody Caudwell, the head of coaching and player development. They’re very, very good at making you think at the right times by asking questions to help you get to the answer you're looking for. A lot of it involved asking yourself questions. In that respect, I'm still learning every day.

Steve Cooper coming in as Chris Hughton’s replacement gave me another opportunity to learn from someone new. Steven Reid was a coach I had known for a long time, while Alan Tate also came in with Steve Cooper – he has been a brilliant link between us all.

I’m still in my infancy as a coach, so watching Steve working in the build-up to the 2022 Championship playoff final was brilliant. It was someone working under a lot of pressure, but handling that pressure and delivering his message to keep everything the same and treat it as another game so that the players performed. They’re the things I’m learning.

The team was bottom of the Championship after seven games of that 2021/22 season, but they got promoted. I don’t think anybody expected that, but we gathered momentum week in, week out. I don’t remember the atmosphere ever being so loud at The City Ground. Everybody was on board, and there was a feeling of something special bubbling along.

When the ref blew the whistle at Wembley, confirming that we were going back to the Premier League, it was a massively special moment. It feels like we’re all in it together, and that we’ve all played a small part. That’s a big thing, because it’s still all about the players.

I watched the first team over a period of six weeks, and a lot of what they were doing was similar to the philosophy and syllabus applied in the academy. After three months, I asked how we could link things up, and if I could see some of their video meetings. I wanted to see what they looked for in the players, and what they wanted to do with them.

Alan went through everything they show to new players when they come in, and we spoke to the gaffer about terminology, language and what they want. It helped us to play a similar style to the first team, so that when the players step up it feels more familiar to them – something that hasn’t always been the case at our football club.

As at a lot of clubs, there has been such a high turnover. As an academy, we can’t afford to change our syllabus every time a new manager comes in with different ideas on the game. But this fell into place organically, with us having similar ideas.

Steve’s very good tactically, and works really, really well on the training pitch. Before I started working full-time with the first team, I watched some of the sessions from a distance. There, I could also see his man-management – how he dealt with the squad as a whole and kept people happy.

It’s important to him that everybody pulls in the right direction and feels involved. The empathy he shows throughout the club – not just the players, but all the staff as well – is as good as I’ve seen. He has time for everybody.

Those are things I’ve had to work on. When you’re a player, it’s geared towards how you feel – even in a team structure, there’s a lot of “I” – but jumping into coaching forces you to develop empathy quickly. Can I recognise what someone’s mood is like? When they’re down, and might need some help? That’s not just the players, but the staff as well.

What drives me every day is helping those I work with to achieve. I was very fortunate to experience some amazing things as a player. As a coach, it’s such a special feeling to be able to help a player do the amazing things I know they can.