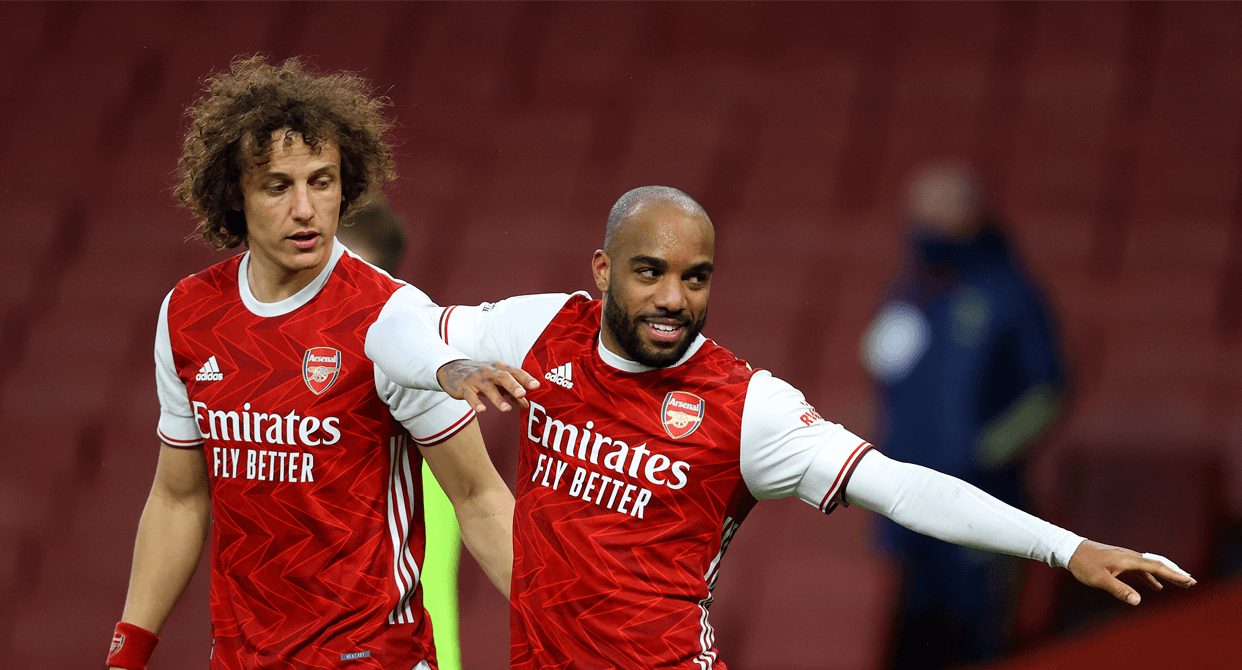 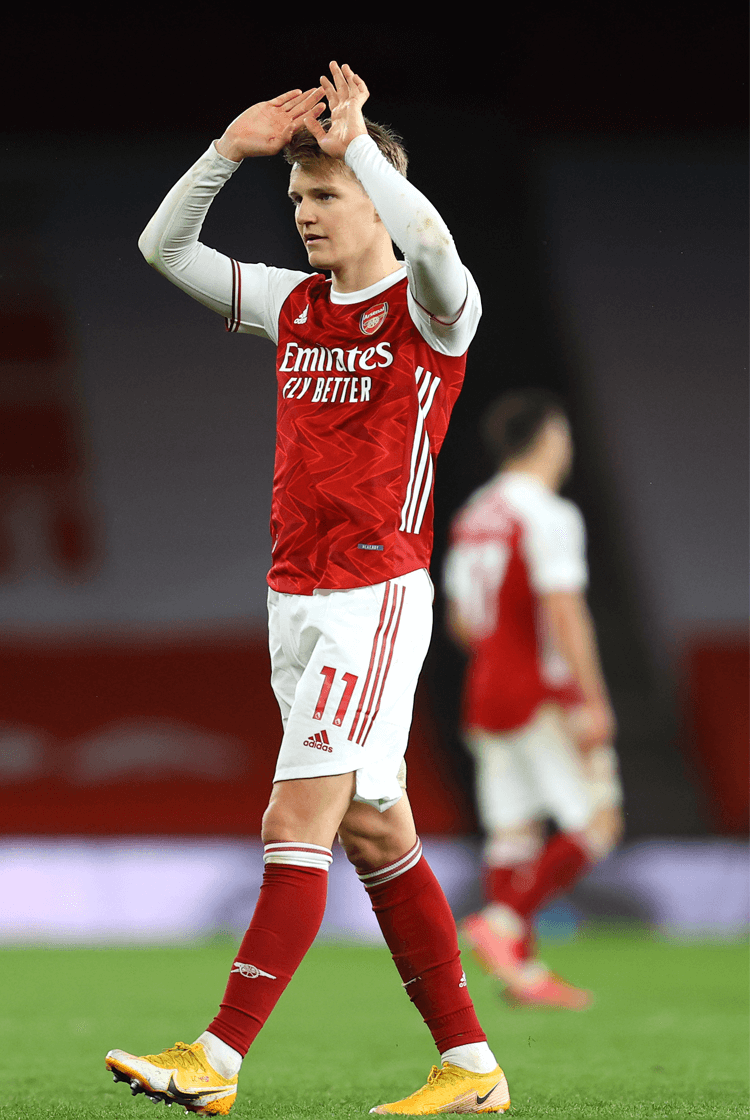 Arsenal impressively recovered from a losing position to beat Tottenham and increase their hopes of finishing above their rivals in the Premier League. They are four points behind them with 10 league fixtures each to play, and at a time when Arsenal have the greater momentum with a victory secured after Mikel Arteta dropped Pierre-Emerick Aubameyang for a disciplinary measure. Erik Lamela, a substitute, gave Spurs the lead with a superb rabona finish, but Martin Odegaard scored Arsenal's equalising goal on the stroke of half-time and Alexandre Lacazette put them in front from the penalty spot in the second half. Davinson Sánchez had fouled the striker to concede the penalty from which he scored; Lamela was also later sent off after being given a second yellow card. "We had a really strong performance right from the beginning, we created many chances and went a goal down with their first shot," said Arsenal's manager Mikel Arteta. His opposite number, José Mourinho, said: "They were more intense; aggressive; moving the ball better than us. In the second half we recovered control of the game. In our good moments we made changes to try to win the game and when the game was there to be played, the referee made a wrong decision (awarding the penalty)." 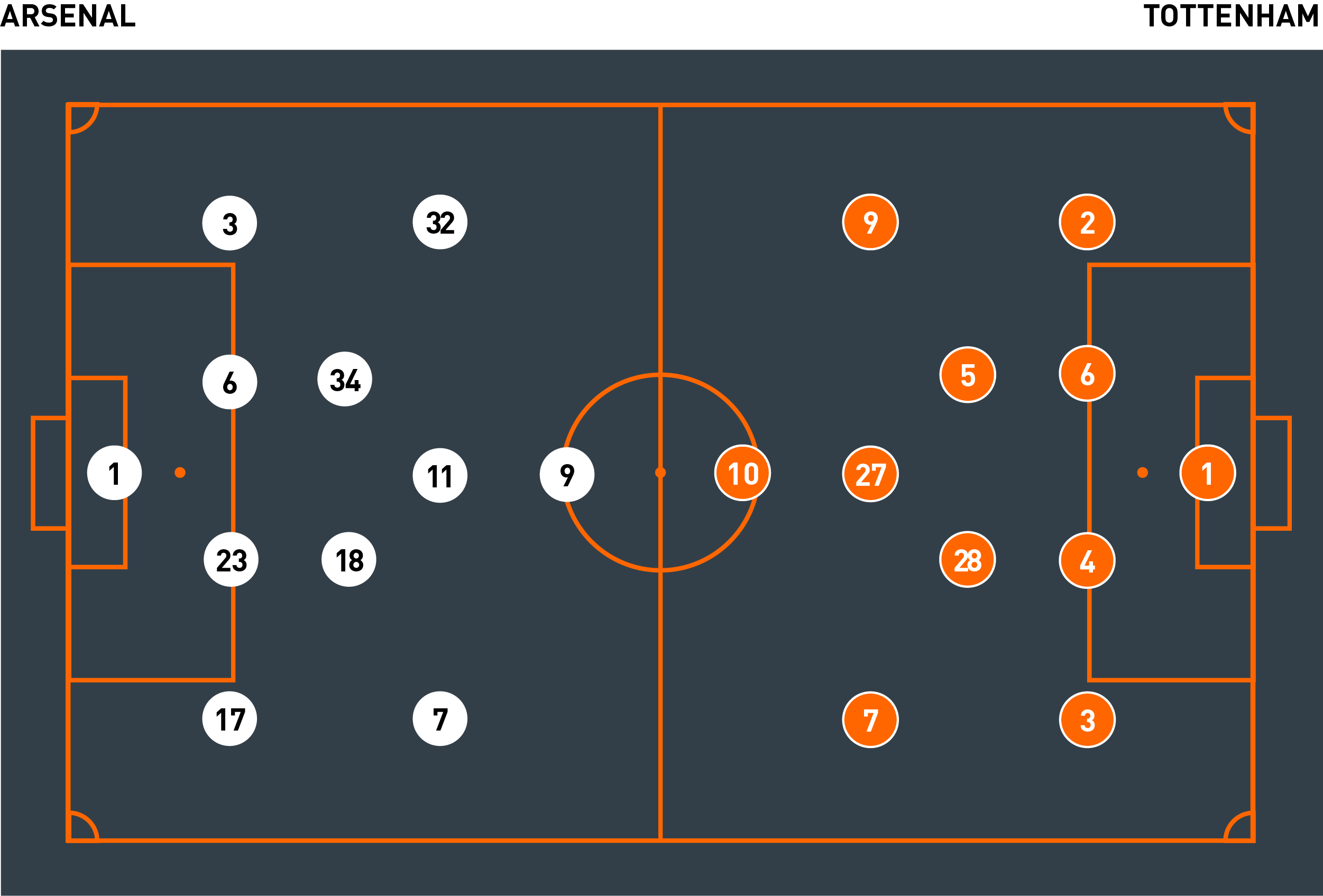 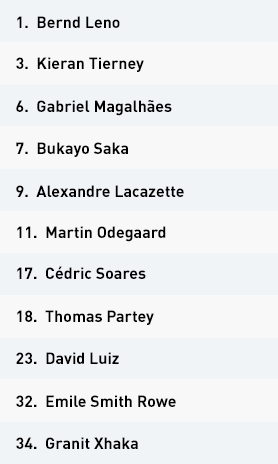 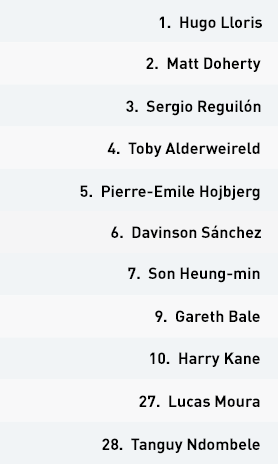 Arsenal were organised by their manager Mikel Arteta into a 4-2-3-1 formation that on this occasion was led by Alexandre Lacazette. Their rivals, Tottenham, defended with that same shape.

The hosts dominated possession in the opening minutes – recording 76 per cent possession during the first 11 – and presented their visitors with the challenge of negating the two-on-one that existed via Thomas Partey and Granit Xhaka against Lucas Moura. In an attempt to limit Arsenal's access to that area of the pitch, Son Heung-min and Gareth Bale adopted narrower positions and, Bale to a reduced degree, showed Arsenal's central defenders wide. They had some success, in Xhaka and Partey adopting wider positions on the outside of their team's starting structure.

When they did so, the far-side full-back moved into a more central position to achieve defensive security and deputise in central midfield. The movements of Xhaka and Partey also created space for Martin Odegaard to withdraw into to receive penetrative passes, and he regularly did so before moving in the opposite direction to Partey to test Spurs' midfielders. Arsenal remained patient in their attempts to draw their opponents towards the ball before looking to attack into the spaces between and beyond them. They also regularly played longer passes in behind to Emile Smith Rowe and Bukayo Saka, who from their starting positions made diagonal runs infield, in turn encouraging the full-backs behind them to advance and ensuring that all five attacking lanes were filled.


Those diagonal runs also tested Spurs' full-backs, who were confronted with whether they should track them and risk leaving spaces for Arsenal's full-backs to attack into, or to remain in their position and discourage switches to their opposing full-backs. Arteta's team continued to play through their opponents – and partly because of the inconsistency that existed between Bale and Son's replacement Erik Lamela, as was demonstrated when they scored their equalising goal.

As possession was built and progressed towards the final third, Smith Rowe made runs into the half-spaces between Spurs' central defenders and full-backs as possession travelled wide to Tierney; his movements, coupled with those of Lacazette withdrawing into a deeper position, provided Tierney with two options. Smith Rowe became his target if he was playing in behind; Lacazette for a bounce pass. That attacking pattern remained common, and regularly led to progress towards the left and then crosses being played into the penalty area.

José Mourinho set Tottenham up into a 4-2-3-1 formation in which Gareth Bale, Lucas Moura and Son Heung-min supported Harry Kane in the final third. Their hosts, Arsenal, defended with a 4-4-2, via Emile Smith Rowe and Bukayo Saka withdrawing into midfield, and Martin Odegaard advancing to alongside Alexandre Lacazette.

Spurs started by attempting to play out from defence, but they encountered an aggressive press from Arsenal, whose front two sought to close down both their central defenders and Hugo Lloris. Arsenal's use of a 4-4-2 meant that the potential existed for Spurs to create a three-on-two in central midfield, but the intensity with which Arsenal pressed meant that they instead often had to play long.

Arsenal also attempted to encourage them to play into the wider areas, where the relevant full-back would be closed down by his opposing wide midfielder, and when they both sought to block the passing lanes infield and to restrict access into Spurs' deepest-positioned midfielder via their ball-side forward. There were occasions when Spurs risked playing into the press Arsenal were applying, and when they therefore conceded possession in their defensive half, ensuring the hosts could instead counter, so they adapted by playing into it before then switching play, via Lloris, to the far side of the pitch – to where Arsenal would require time to move.


A similar idea existed in the attacking half, where possession was also worked to one side of the pitch and then back across to the other, and spaces sought through which they could penetrate, or play was switched directly, to create the potential to then cross into the penalty area. One such switch led to Spurs' opening goal – one that was against the run of play, given Spurs had, before then, done little to trouble their opponents.

Too many in Spurs' XI sought to receive to feet, and therefore offered little or no threat in behind, ensuring Arsenal mostly remained compact and that possession was largely in front of them. The hosts consistently succeeded in reducing the spaces that existed between the lines, and therefore in ensuring Spurs created few quality goalscoring chances. Tanguy Ndombele moved further forwards to operate from a more advanced position, but still Spurs struggled to create. By working possession wide and then crossing into the penalty area they had increased potential, but a second goal eluded them.