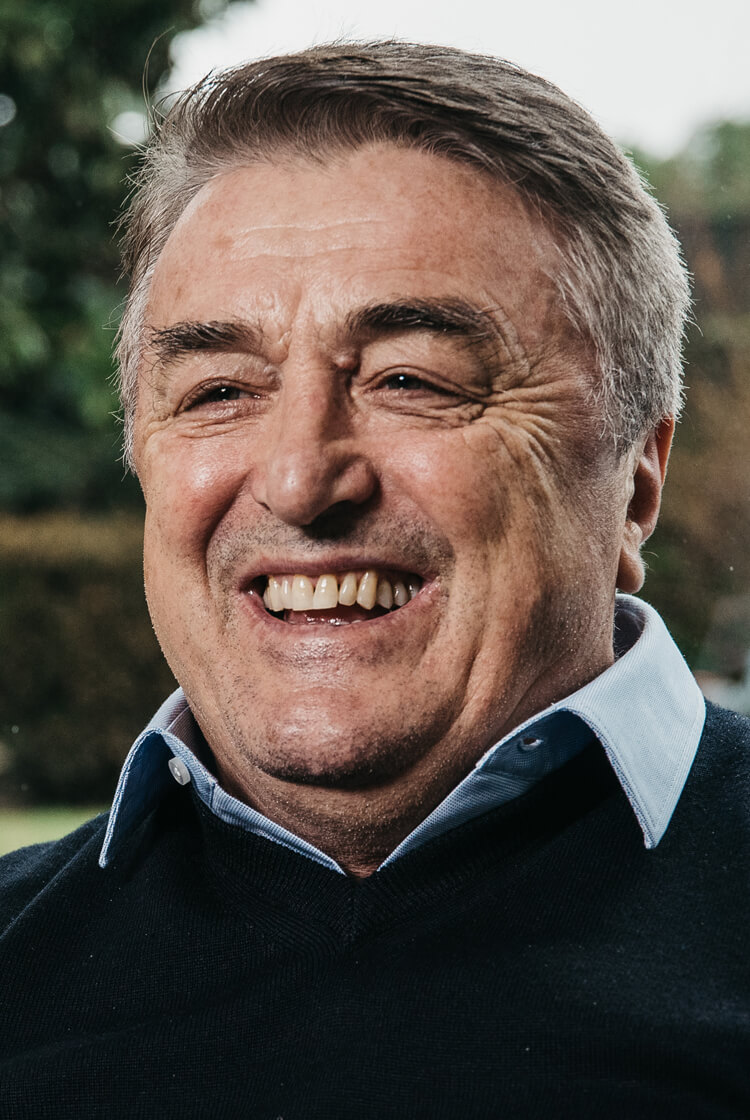 Playing at Luton Town was like going to university.

Not just university for football, either. For life in general. I have enormous respect for England, and for everything I learned there.

If football has given me anything important, it’s getting to know different philosophies of life.

Like David Pleat’s. In a way, he discovered me.

I was already 31 when I signed for Luton.

I’d played the two previous seasons with Real Zaragoza, and was named the most cost-effective player in the championship by MARCA, the daily sports newspaper. Vujadin Boskov, my manager at Zaragoza, then went to manage Real Madrid. I could have gone with him, but my age was against me.

David Pleat (above) came to see me at Zaragoza, in the last league match against Rayo Vallecano. We went to have dinner at a well-known restaurant in the city.

“I know you’re someone who lives for this sport and for your family,” he said to me. “That’s important.”

“I said to Pleat: ‘Everybody plays with a sweeper. Look at Franz Beckenbauer.’ He was clear: ‘Yes, but this is England.’”

It was an FA Cup tie. Before the match, Pleat came up to me and said: “Antic, think of Wembley.”

I told him: “But coach, there are so many famous clubs. To win this competition…”

It was impossible for me to believe we could, and at the beginning I took those comments in jest. However, as time went on I saw it wasn’t a joke. He was being serious. That’s how the English are about football. It’s a dream for them to go to Wembley and win the FA Cup.

I had played as a sweeper, a position that doesn’t really exist in England. I used to talk to the manager; try to convince him I could play there for Luton.

“David, everybody plays with a sweeper.”

But he was clear: “I’ve got a full pitch. I don’t have the right to put a player on just to wait in defence, and then be weaker than the opposition in attack.”

“But David, everybody does it,” I insisted. “Look at Franz Beckenbauer.”

“Yes, but this is England,” he said. Pleat was a coach who knew what he wanted.

Now, though, I see that English football has lost that pride in its philosophy of the game. It has lost some of its roots.

“On Sundays my family and I would travel all over England. We found all of the safari parks. My kids loved them all.”

It was in the last fixture. We were playing at their ground. The 0-0 draw would mean relegation.

I was on the bench. In those days, there were only two players on the bench, but the manager told me to come on in the second half.

In the 84th minute, Brian Stein floated the ball into the area. It came back to him. He tried again. From the second rebound, I scored from outside the box.

That goal saved us, and meant relegation for City.

The journey from Manchester to Luton was mad. Everywhere we stopped there was a party. When we got home, people greeted us as if we had won the FA Cup.

I’ve always said that England helped me grow as a person.

As a manager, I tell my players how important home is. I’ll also never forget the first time we arrived at our new home.

I would paint the house; look after the garden. I even furnished the house with my wife. It makes you feel fulfilled as a person.

"You can't live on football alone – you have to think family."

At Luton, we always played on Saturday afternoons at 3pm. After the match, the manager would come up to me and say I had the whole day off on Sunday to spend with my family, and that’s what I’d do.

On those Sundays, we travelled all over England. We found all the safari parks in the country, something that my kids loved. We also went to Cambridge and Oxford. I remember a day with my daughter in Cambridge, which I’ll never forget.

“Dad, will I be able to study here?” she asked me. I told her that of course she could, but only if she was a very good student.

Education has always been important in my family. But football has been my life.

I grew up in Yugoslavia, a country where sport carried a high social importance. At school, we had two hours of sports lessons a day and were encouraged to play other sports beyond that. I played basketball and boxed. In the end, though, I decided to play football for Uzice, where I studied.

When I was 23, I went to Belgrade to play with Partizan. I’d got married a few months earlier. A house was included as part of my contract. That was very important. I was the only one of my peers who owned a house. My parents were very proud.

When I extended the contract, because I had children, the club gave us a bigger house. That’s really important because you can’t live on football alone – you also have to think about having a family. About taking on responsibility.

Away from football, I started to study sports science at university. I remember the final test to pass the diploma. It was about the dead-ball strategy, both in attack and defence. The work I did then has been talked about a lot at the university since.

Training and studying was a huge effort. Studying for the exams while on camp with the team, in particular, but it developed me culturally as a person.

When I was 28, I played outside Yugoslavia for the first time. I moved to Turkey, to play for Fenerbahce.

It was a special time. I already had two children, and from my point of view Istanbul was, at that time, the most beautiful city in the world.

A city of two oceans. Of two continents, and one with a history very much linked to the old history of Yugoslavia.

"When Boskov spoke, everyone at Zaragoza would listen"

In my second season there, we became champions with a goal I scored against Galatasaray. A goal where I smashed my head in! I ended up in hospital that night.

But something happened that influenced my decision to leave. There was great political turbulence in Turkey at the time – which in time led to a coup d’état by General Kenan Evren.

I had a family; two kids. Even though I was in a beautiful city where I really enjoyed playing, I decided to leave for Spain.

I went to Zaragoza, where my countryman Boskov (above) was in charge. He had mentioned to my manager at Fenerbahce, Tomislav Kaloperovic, that they needed a player with my attributes. He told Boskov I was the best there was.

Boskov would teach me a lot, from aspects of the game to things to do with family. He advised me to send my children to the British School in Zaragoza, for example. We always talked about how important education was in the creation of the whole person.

When Boskov spoke, everyone would listen. I also learned from him that it is not good players that make good teams. It is a good atmosphere.

A decade later, when Zaragoza called me to ask me to manage them, the first thing I did was to travel to Slovenia. To a corner of the country, close to a lake, where Boskov lived. I asked him what I needed to do to manage in the Spanish league. I’d never had demands like that placed on me before.

He told me everything. He even lay down on the ground and did abdominal exercises. He showed me how to do them with a ball, too. Everything.

In that way, Boskov was like a father to me. He gave me what is so important in both life and football. An education.