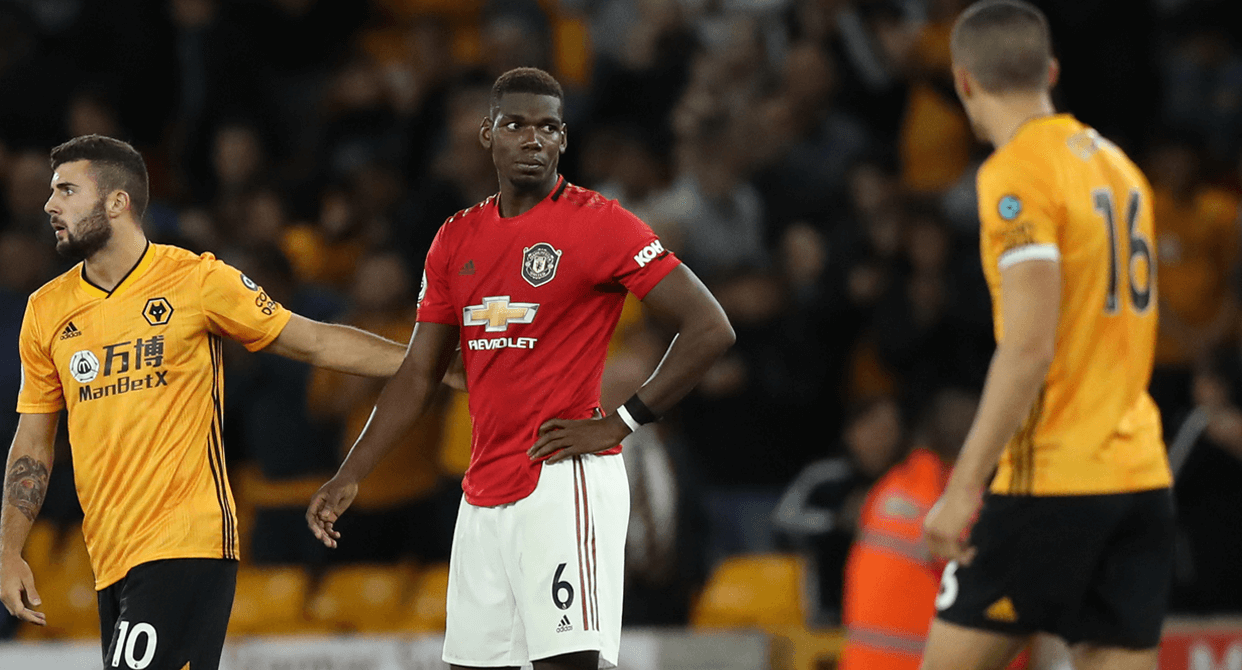 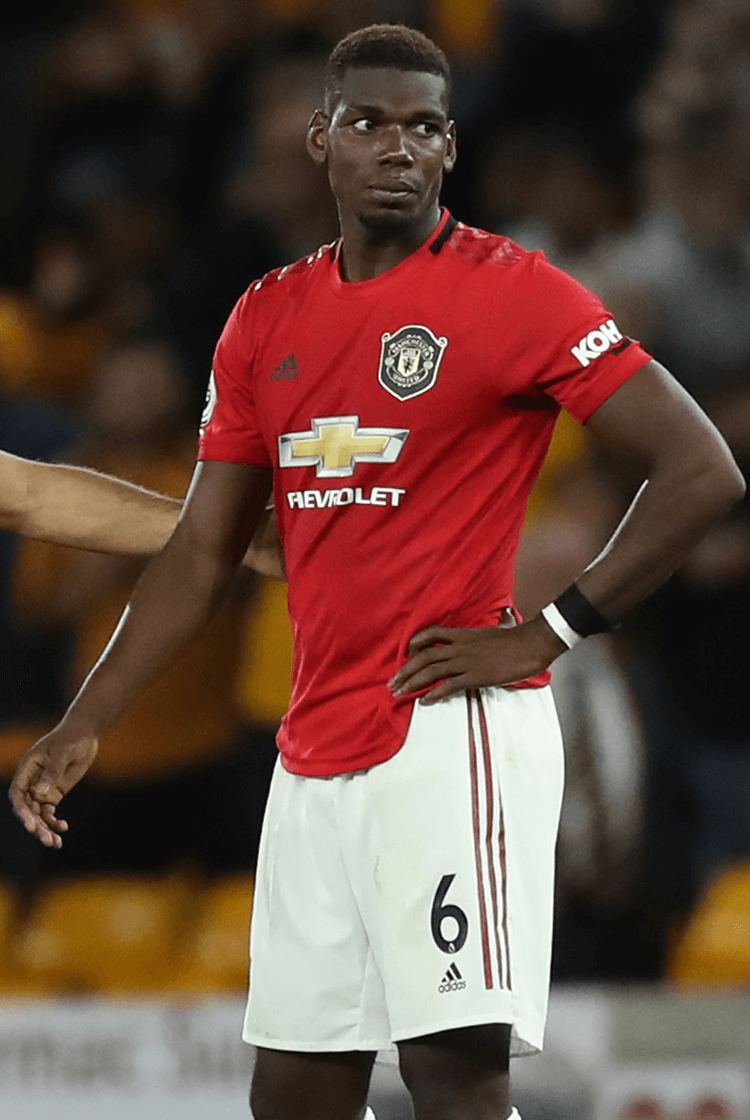 Manchester United travelled to Wolves, where they lost twice last season, hoping to follow their impressive victory over Chelsea with a further three points in the Premier League. If the mood around Old Trafford had been improved by the four goals they put past their one-time title rivals, suggestions persisted that they could struggle at Molineux. Anthony Martial, again playing at the top of Ole Gunnar Solskjaer’s new-look attack, gave them the lead in the 27th minute with his 50th goal for the club, a fine left-footed finish. An outstanding goal from Ruben Neves brought the hosts level 10 minutes into the second half, before Paul Pogba was presented with the chance to secure all three points from the penalty spot after being brought down by Conor Coady in the 67th minute. The Frenchman’s effort was convincingly saved by Rui Patricio, sparking debate over whether Marcus Rashford, who had scored so comfortably from the spot a week earlier, should have been on penalty duty once more. 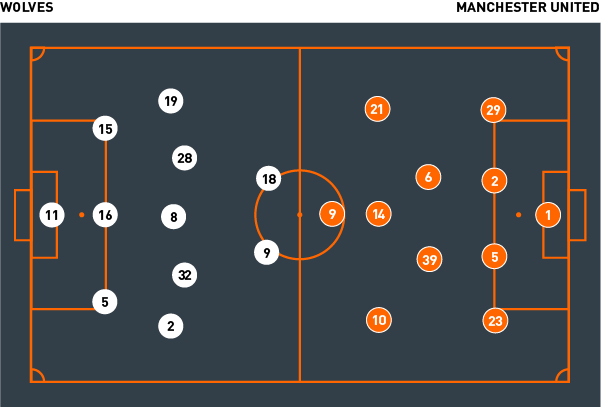 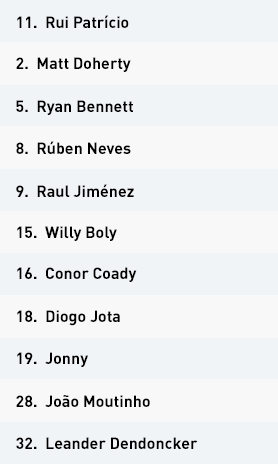 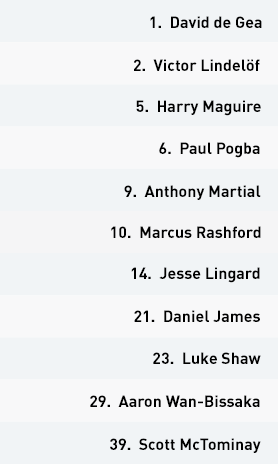 Nuno Espirito Santo set his Wolves team up in a 3-5-2 formation in possession, led by the familiar front two of Raúl Jiménez and Diogo Jota. Their struggles to establish any form of control over the ball during the first half meant that they relied solely on set-pieces, transitional moments and long, diagonal switches of play in their attempts to create.

It took them until the 53rd minute to threaten, when Jiménez’s header hit the post. Previously, Manchester United’s central-defensive pairing of Victor Lindelöf and Harry Maguire had denied Jiménez the time and space to receive and turn, or even to set the ball to his midfielders. They remained tight to the Mexican forward, and looked to step in front of him when the ball was played.

In the second half, the hosts gained more control of possession. They still looked to switch – more regularly from left to right – but instead of favouring the long switches they had used during the first half they played through their midfielders. This proved more difficult for United to adjust to because of the need to anticipate when possession would be transferred, and the spaces that then created. These switches were often intended to send the athletic Adama Traoré – a second-half replacement for the unwell right wing-back Matt Doherty – one-on-one with Luke Shaw, from where he sought to beat the full-back and cross.

As against Chelsea in the opening weekend, United used a 4-2-3-1 structure out of possession, and switched between a high press and a mid-block. When they pressed high, Jesse Lingard would position himself between João Moutinho and Ruben Neves – Leander Dendoncker would often move higher than his fellow central midfielders – while Marcus Rashford, Anthony Martial and Daniel James attempted to go man for man against Wolves’ three-strong defence. Paul Pogba and Scott McTominay were ready to assist Lingard with the press in central areas, while full-backs Shaw and Aaron Wan-Bissaka were respectively responsible for Doherty (later Traoré) and Jonny.

In the mid-block phases those responsibilities would remain similar, although James and Rashford would move out to press Jonny and Doherty, with Wan-Bissaka and Shaw remaining deeper. As Dendoncker tried to move both into advanced positions and into the spaces vacated by Shaw pushing wide to press, McTominay tracked his runs.

United’s defensive structure remained relatively solid throughout, essentially leaving Wolves reliant on the spectacular finish from Neves that earned them yet another point against a top-six team.

Ole Gunnar Solskjaer set Manchester United up in a 4-2-3-1 formation in possession, and regularly sought to exploit the space in behind the Wolves defence. Nuno Espírito Santo’s team quickly recognised that they were going to struggle to defend those spaces because of the pace of Marcus Rashford, Daniel James and Anthony Martial, and therefore moved to defend with greater depth.

The visitors responded by looking to create small pockets of space with clever positioning and rotations intended to draw individuals from Wolves’ defensive line and then targeting that space – particularly on their left side. Scott McTominay would adopt a false full-back position, often tempting Leander Dendoncker towards him. Matt Doherty was forced to advance to assist Dendoncker by pressing Luke Shaw; when he did, Rashford would drop in between the lines, dragging Ryan Bennett with him to where either Shaw, Martial or Lingard would move to to receive the next pass. It was this approach that eventually brought United’s goal.

With Rashford increasingly operating inside, Shaw seeking overlaps and Aaron Wan-Bissaka making similar runs on the right, McTominay and Paul Pogba largely remained behind the ball to provide security against Wolves’ potent counters. The hosts were also uncertain over whether to hold their shape and encourage United to receive to feet, or to move out and press them but risk those spaces being exploited.

While defending, Wolves’ 3-5-2 shape dropped into a 5-3-2, with Jonny and Doherty dropping to either side of their three central defenders. They initially pressed high; Diogo Jota and Raúl Jiménez respectively pressed Victor Lindelöf and Harry Maguire, João Moutinho targeted Pogba, and Dendoncker prioritised McTominay. Doherty’s inconsistency in pressing Shaw or remaining with Rashford meant Dendoncker was divided between McTominay and Shaw, which helped United progress from defence on regular occasions in the first half.

The threat posed by the visitors’ attacks led to Jota being used in deeper territory on the left, where he then pressed Wan-Bissaka instead of Lindelöf. This freed up Boly to remain with James and share responsibility with Moutinho for Lingard while retaining a compact shape. Wolves were less open in the mid-block than they had been in a higher press that left spaces for United to receive and play. The distances between the Wolves units were smaller in a much improved second-half performance that ultimately left United to head home with one point when maybe they should have had all three.