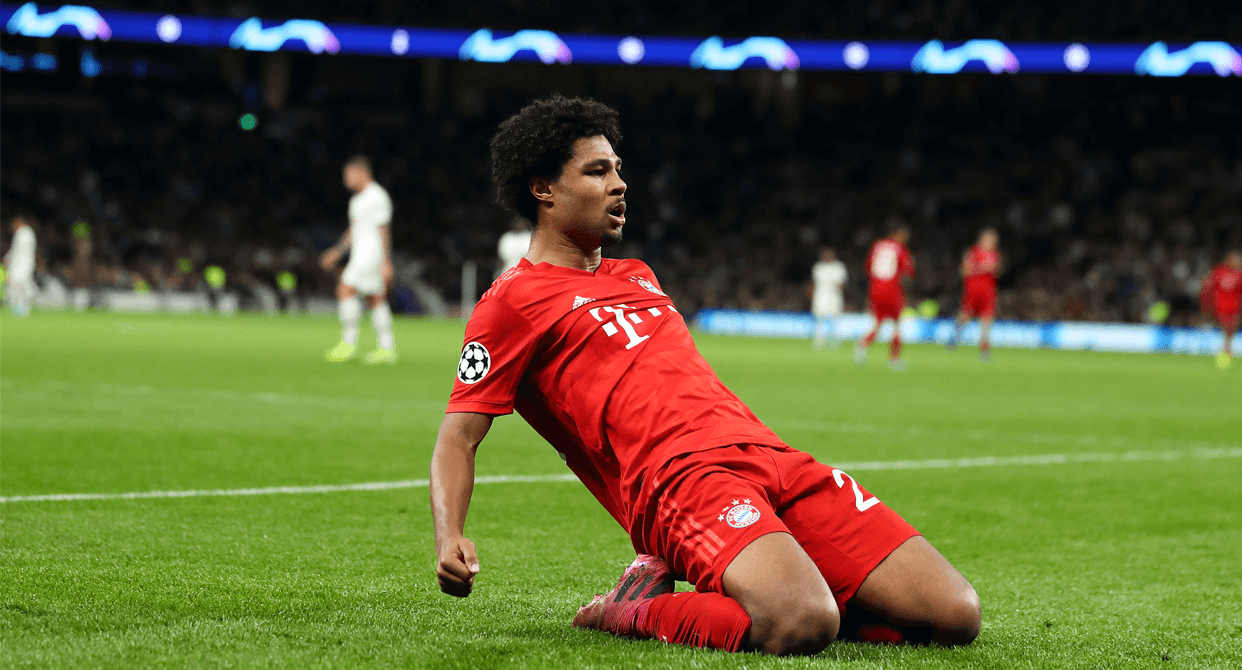 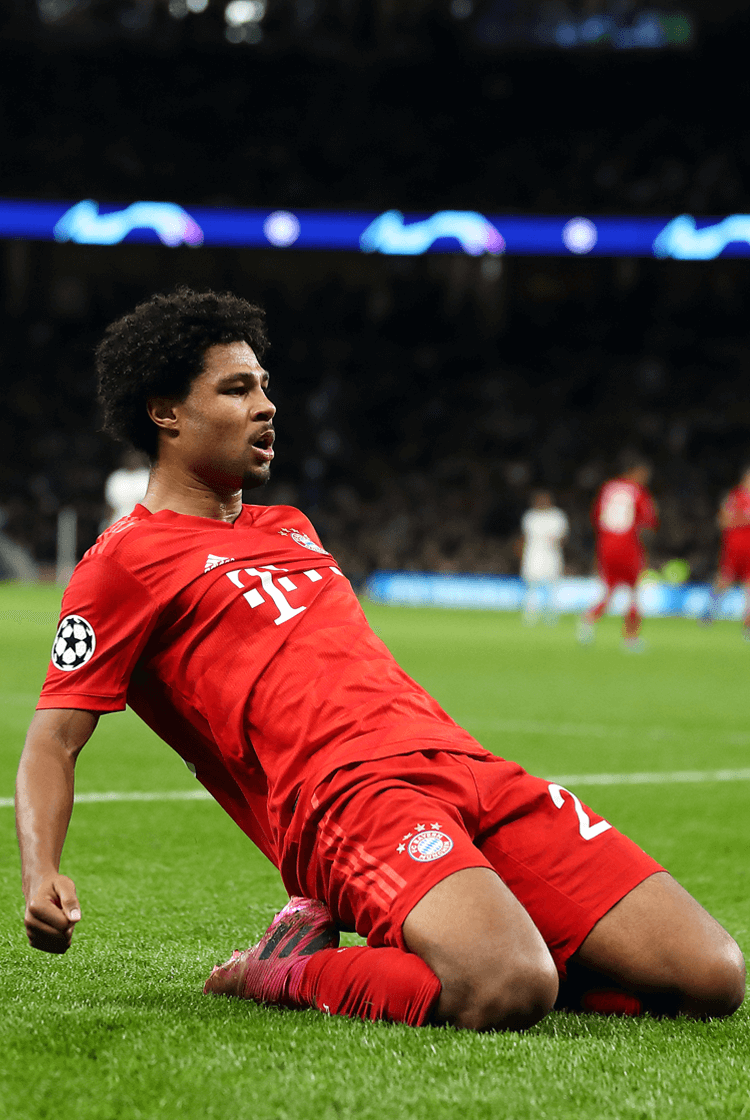 Bayern Munich embarrassed last season’s finalists Tottenham to establish themselves as contenders for the 2019/20 Champions League. Spurs have had a challenging start to the season, and so one-sided a defeat – largely inspired by former Arsenal forward Serge Gnabry – risks truly unsettling what has become one of the Premier League’s most stable clubs. That they led through Son Heung-min’s 12th-minute goal before eventually losing by such a significant margin may even be cause for further concern. Goals for Joshua Kimmich and Robert Lewandowski gave the visitors a narrow half-time lead, before Gnabry’s first two extended it. A Harry Kane penalty reduced the deficit, but Gnabry scored twice more, either side of Lewandowski’s second goal, as five-time winners Bayern ran riot. 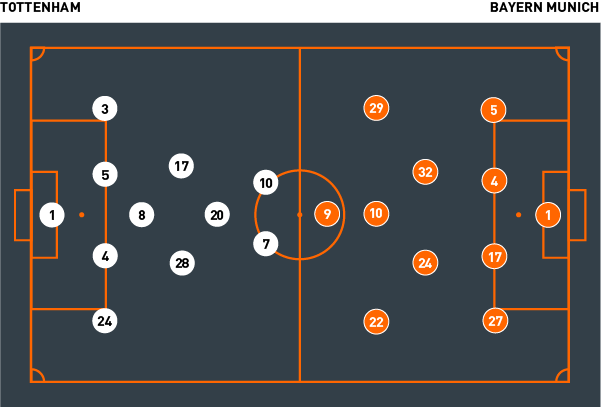 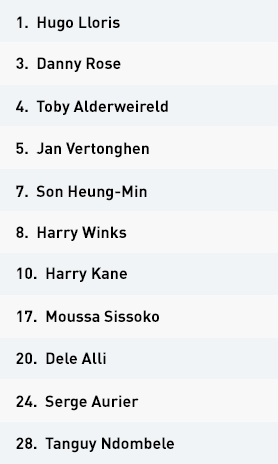 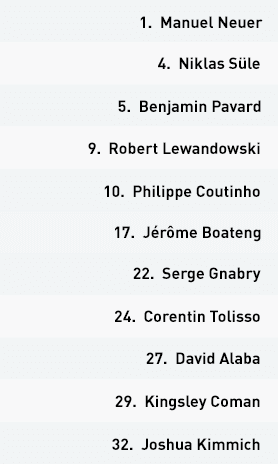 Mauricio Pochettino’s Tottenham began in a four-diamond-two formation in which Dele Alli was at the peak of the diamond, Harry Winks at the base, and the French pair of Tanguy Ndombele and Moussa Sissoko between the two England internationals. They struggled to establish possession and create opportunities, however, so their most positive moments came during transitions.

Ndombele and Sissoko looked to draw Bayern Munich’s wide midfielders inside, to encourage full-backs Danny Rose and Serge Aurier to advance into the resulting space that was enhanced by the reluctance of Bayern’s full-backs to press them and risk Alli, Harry Kane and Son Heung-min running in behind.

For the second half, Pochettino reorganised his team into a 4-2-3-1 that featured Ndombele and Winks as a double pivot in front of the defence, Son withdrawing to play as the right-sided attacker, and Sissoko advancing on the left. They continued to attempt to play with width and advancing full-backs, before eventually playing possession inside to the far-side attacking midfielder driving inside. Son, whose movement was particularly intelligent, and substitute Christian Eriksen were also therefore cutting inside on to their favoured foot, inviting them to shoot.

A lack of care and detail on the ball meant Tottenham too often conceded possession, however. The more the hosts chased a result, the more vulnerable they became in transition, contributing to what might have been a narrow defeat turning into quite the opposite.


Bayern operated in a flat 4-4-2 formation out of possession; Philippe Coutinho joined Robert Lewandowski in the final third, while Serge Gnabry and Kingsley Coman tucked in alongside Joshua Kimmich and Corentin Tolisso in midfield. Their full-backs advanced to press Spurs’ wide midfielders, which was made possible by the hosts lacking a wide threat further forward. When one full-back did so, the other often adjusted to form a compact back three. This also freed up a midfielder to negate the threat Alli posed between the lines.

They also, in phases, used a mid-block with which they would withdraw a further 15 yards, and Lewandowski and Coutinho would share responsibility for pressuring a central defender and Winks. Their midfield therefore remained balanced and compact; more widely, Bayern were able to defend against Spurs’ attempts to play with width and protect their penalty area with six outfield players.

German champions Bayern Munich were set up into a 4-2-3-1 formation by manager Niko Kovac. Joshua Kimmich and Corentin Tolisso featured as the double pivot in midfield, with Robert Lewandowski as the lone striker in front of on-loan number 10 Philippe Coutinho.

They particularly excelled in creating and finding a free individual during their build-up phases. Against Tottenham’s diamond midfield, they recognised both the potential for spaces in wide areas and that they could be exploited by switches of play; the understanding between their full-backs and wide attackers also ensured dangerous overlaps and combinations that troubled Spurs’ full-backs throughout.

The potential threat in behind posed by Lewandowksi and Coutinho meant that the hosts’ central defenders struggled to assist with attacks from out wide, so Bayern’s wide attackers largely remained in advanced positions, from where they would make diagonal runs inside and behind the hosts’ defensive line.

Pochettino’s team attempted to negate their visitors by switching to a 4-4-2 when they were defending, but Bayern simply adjusted again; Coutinho drifted inside towards Tolisso and substitute Thiago Alcântara to create three-on-two overloads against Harry Winks and Tanguy Ndombele or Moussa Sissoko. Those overloads forced Spurs to become even more compact, and therefore concede further space out wide.

Bayern also delayed releasing possession until the last moment to draw the Tottenham press and play to Lewandowski’s feet, when wide attackers Serge Gnabry and Kingsley Coman would be encouraged to run beyond him and Coutinho would move to receive a set pass from the striker and progress the attack. The combination of that quality in possession and their transitional threat was largely what made them so lethal; Bayern’s first, second, fourth, sixth and seventh goals all followed regains of possession and swift counters.

The hosts had started with an aggressive press from their four-diamond-two; in earlier phases, that aggressive press succeeded and contributed to goalscoring chances after turnovers in advanced territory. Bayern gradually succeeded against this structure, however, contributing to the 4-4-2 Spurs defended with during the second half.

If the hosts intended to defend wide spaces with two players, they were perhaps too intense with their press to the extent that those in possession – particularly, given their technical qualities, Thiago, Coutinho, Gnabry and Coman – could beat the individual pressing by quickly changing direction. That, together with central overloads and the visitors’ ability to find a free man, ensured the second half was particularly one-sided.