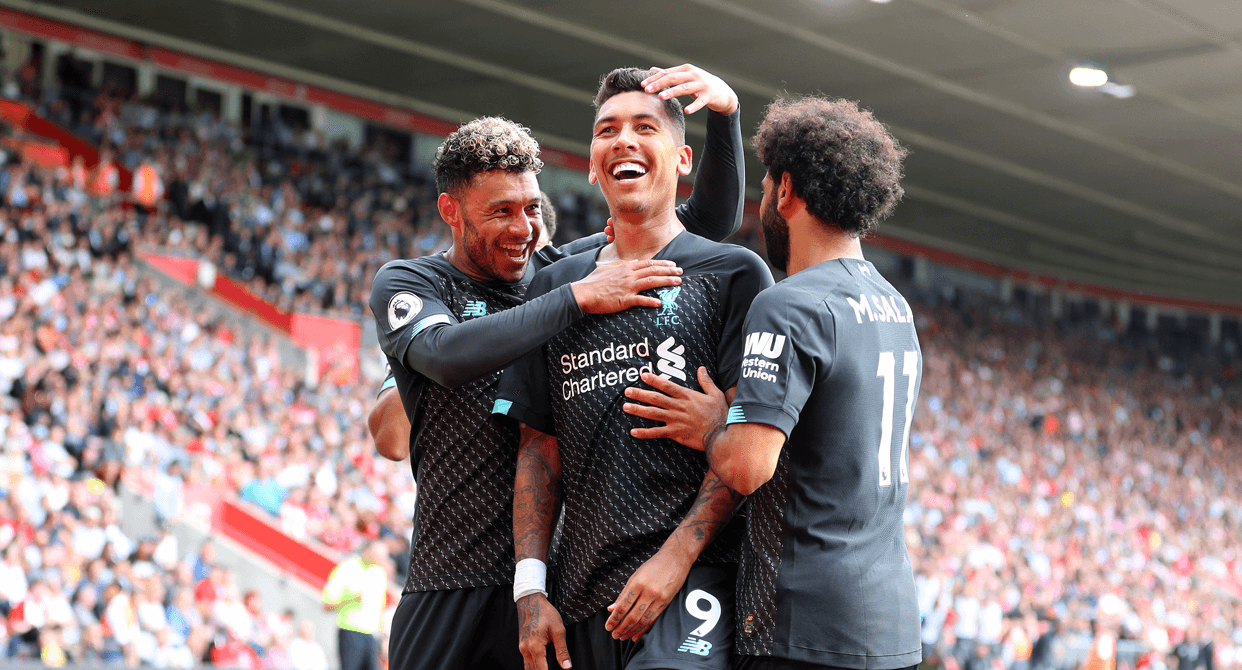 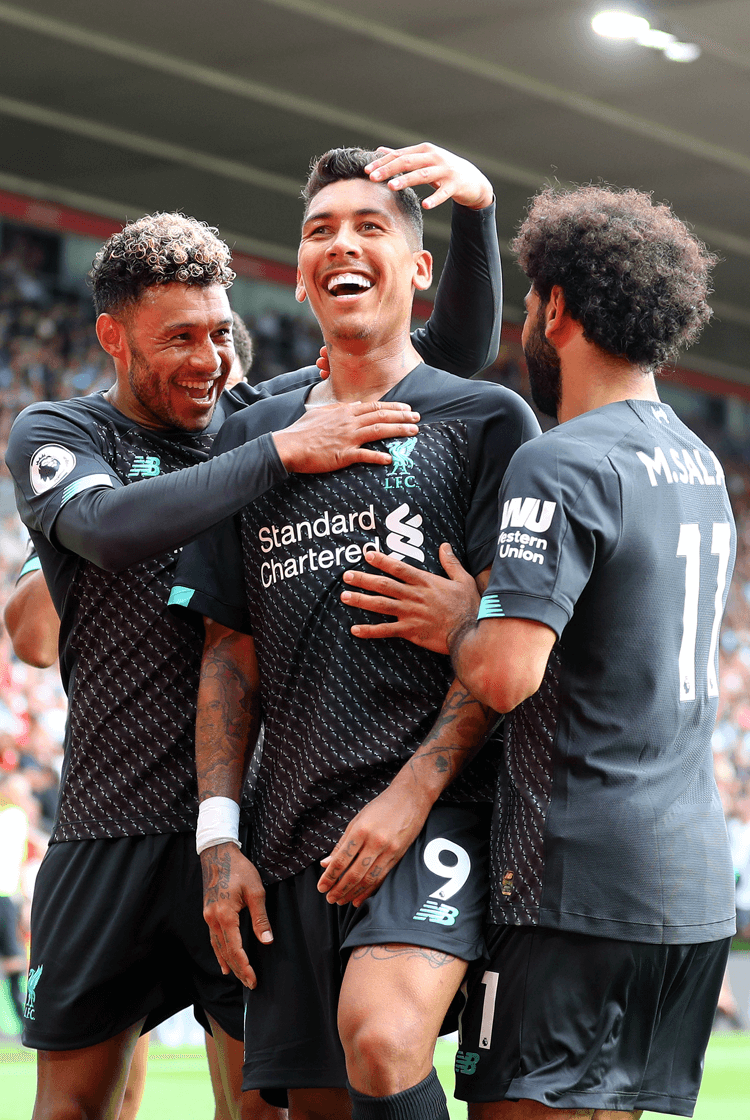 Liverpool equalled a club record by securing an 11th successive Premier League victory after goals from Sadio Mané and Roberto Firmino ensured that even a late error from goalkeeper Adrián did not undermine them at St Mary’s. Jürgen Klopp’s team was leading 2-0 when the Spaniard carelessly cleared the ball against their former forward Danny Ings’ shin to gift the hosts a potential route to a draw. But another fine defensive performance from Virgil van Dijk contributed to limiting Southampton to one goal, and ultimately gave the Reds a further three points on an afternoon when rivals Manchester City dropped two in drawing with Tottenham. Mané had put Liverpool in front towards the end of the first half with a shot from the edge of the penalty area, before creating space for Firmino’s smart finish – the eventual matchwinner – midway through the second. 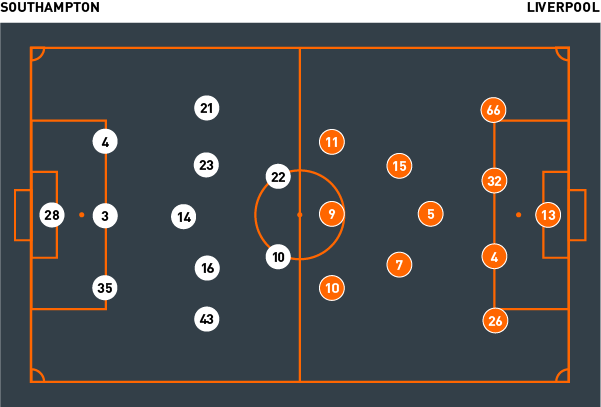 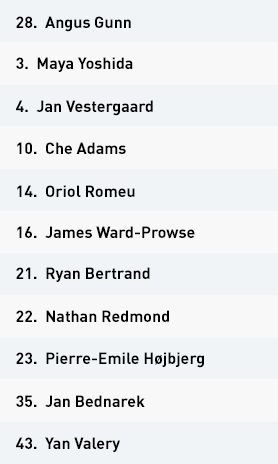 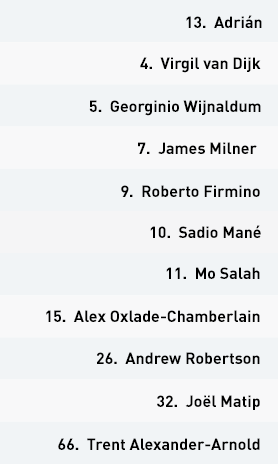 Ralph Hasenhüttl set his Southampton team up in a flexible 3-5-2 formation, in which wing-backs Yan Valery and Ryan Bertrand largely determined their shape. They had limited time on the ball, registering only a total of 38 per cent possession across the 90 minutes, and therefore often resorted to playing long passes under pressure. Goalkeeper Angus Gunn was particularly quick to send direct passes towards the front two of Nathan Redmond and Che Adams, even though Liverpool often won the first contact and then the second ball.

When Southampton found their midfielders, they attempted to exploit the wide areas and half-spaces that existed by playing diagonal passes to their wing-backs. Valery pushed beyond James Milner or Alex Oxlade-Chamberlain when whichever of the Liverpool midfielders on that side was focused on James Ward-Prowse, meaning that they could draw Andy Robertson and create space behind him – at which point Ward-Prowse would run into the channel to receive the next pass. It was then that Virgil van Dijk moved away from central defence to attempt to prevent the cross, which he often succeeded in doing; Adams and Redmond made similar runs but were also negated by Joel Matip and Van Dijk.

Danny Ings’ introduction as a second-half substitute for Oriol Romeu led to Southampton momentarily switching to a 3-2-5. Valery and Bertrand advanced to play on the shoulders of the Liverpool full-backs, with the intention of creating a five-on-four overload on the highest line. The hosts then looked to bypass midfield and target their wing-backs with long, diagonal passes, but once Stuart Armstrong came on for Adams they reverted to the 3-5-2, having been outnumbered in midfield and penetrated too easily.

Out of possession, Liverpool set up in their usual 4-3-3 structure. Southampton’s positional structure meant that they adopted a man-for-man system in which Mo Salah, Roberto Firmino and Sadio Mané respectively pressed defenders Jan Vestergaard, Maya Yoshida and Jan Bednarek, using their body shape to show them inside in an attempt to cut off the passing line to their wing-backs. If the Saints wing-backs did find themselves in possession, they were generally pressed by full-backs Trent Alexander-Arnold and Robertson; if the distance was too great, Milner or Oxlade-Chamberlain moved out to cover.

Further back, Van Dijk and Matip were more than comfortable under aerial balls – but Liverpool also positioned their midfielders and full-backs around any aerial duels in order to win the second ball. It was only through a horrendous error from goalkeeper Adrián that Southampton eventually managed to find the net.

Jurgen Klopp set Liverpool up in their preferred 4-3-3 formation, but four days after playing 120 minutes in the Super Cup against Chelsea in Istanbul they were perhaps inevitably not as dynamic or intense in possession.

The Reds attempted to penetrate from deeper areas by playing in behind the defensive line for Mo Salah and Sadio Mané to run on to, or by crossing from deeper, wide positions. The visitors also sought to tempt Southampton’s central midfielders into pressing further forward so that they could exploit spaces inside. To this end, they looked to use James Milner in both a false full-back and false central-defensive position, encouraging Virgil van Dijk and Joël Matip to spread out and the full-backs to push up.

The Southampton full-backs wouldn’t press Trent Alexander-Arnold or Andy Robertson because of the threats posed by Salah and Mané. The wider central midfielders – James Ward-Prowse and Pierre-Emile Højbjerg – were thus drawn to whoever was playing as the false full-back, creating space for Alexander-Arnold or Robertson beyond that line of the press. Roberto Firmino again expertly dropped into midfield to create an overload, with the Southampton defenders unwilling to track him.

When Firmino collected possession and turned, Salah and Mané made runs behind the Saints defence. Mané looked to make diagonal runs away from goal to receive, dragging Bednarek with him in a bid to create space for either Robertson or Milner to penetrate inside.

Southampton operated in a 5-3-2 while defending, with Jan Valery and Ryan Bertrand tucking in from their wing-back positions. They applied a mid-block structure in which Che Adams and Nathan Redmond positioned themselves either side of midfield pivot Georginio Wijnaldum. Ward-Prowse and Højbjerg respectively tracked Milner and Oxlade-Chamberlain, but left them to press the full-back on their side when he received possession. Southampton also used their wing-backs to move into a covering position on the free player; the remaining four defenders would then shuffle across to maintain a compact shape.

Defensive midfielder Oriol Romeu provided additional cover to limit Liverpool’s options through the middle. The hosts’ defensive line was reasonably rigid, and their attempts to remain compact reduced the success their opponents usually enjoy in getting in behind opposition defences; the two goals Jürgen Klopp’s team scored instead swiftly followed the ball re-entering play from a throw-in, rather than incisive play.