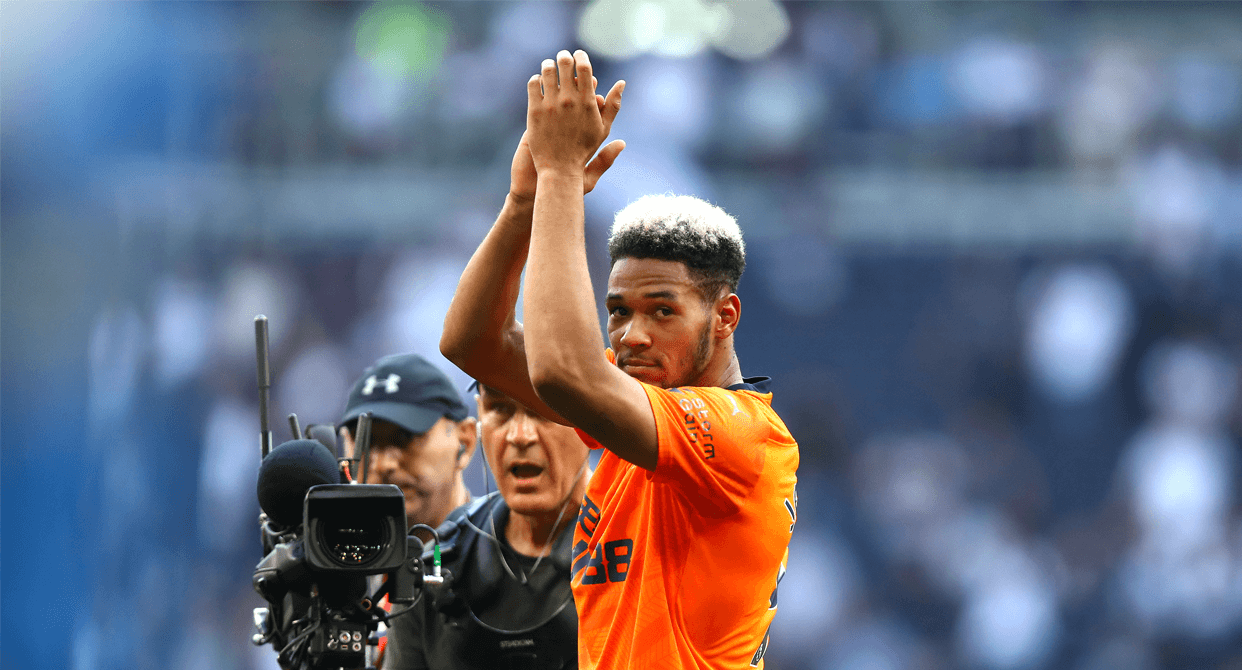 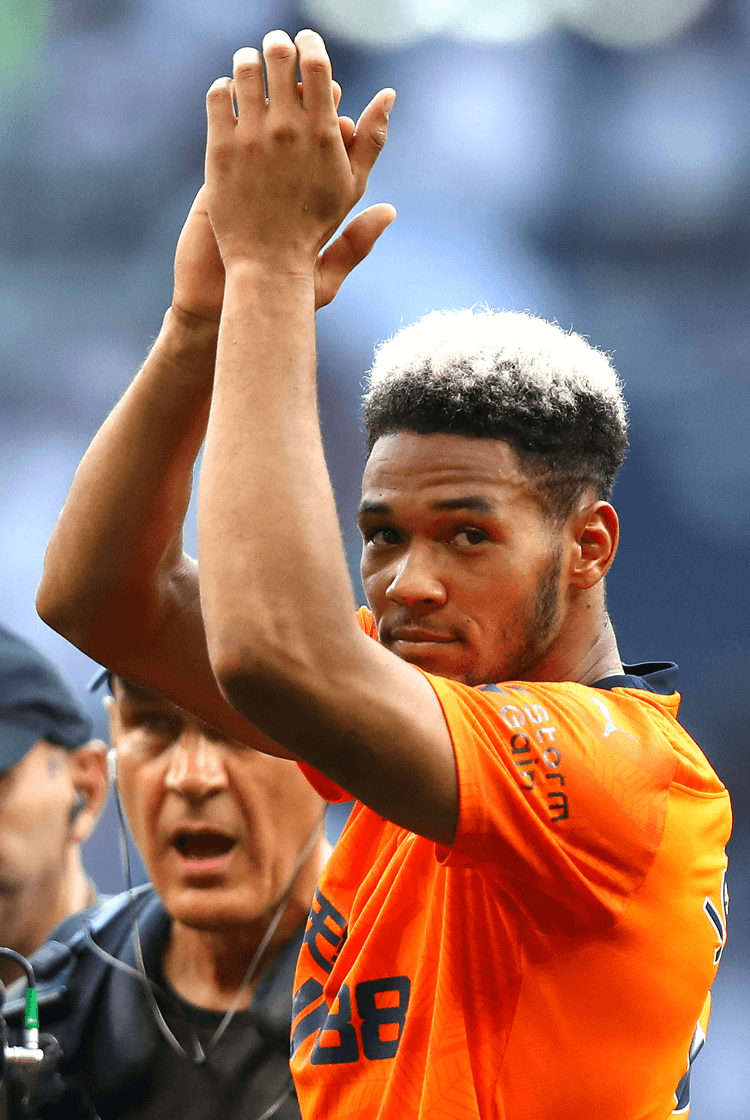 Steve Bruce earned his first Premier League victory as Newcastle manager when a goal from club-record signing Joelinton secured an unexpected 1-0 win at Tottenham. The Magpies had started the new Premier League season with two poor defeats that provoked talk of a relegation battle, while Spurs came to the fixture on the back of having held champions Manchester City to a 2-2 draw. It was in the 27th minute that Brazilian Joelinton capitalised on poor defending from the hosts to control a through ball from Christian Atsu before finishing beyond Hugo Lloris. Bruce’s team then defended resolutely to ensure that Mauricio Pochettino’s 500th match in management ended in defeat, a failed penalty claim from Harry Kane the closest Spurs came to troubling the scorers. 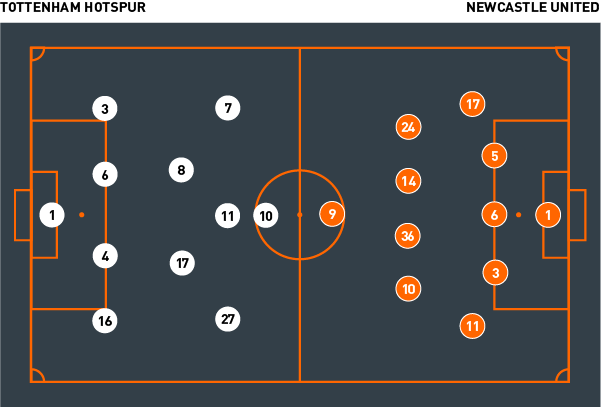 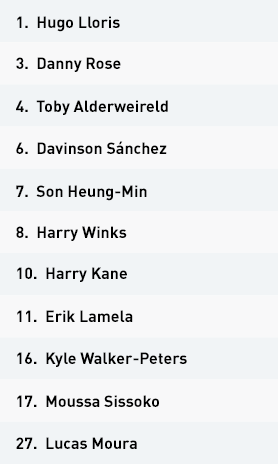 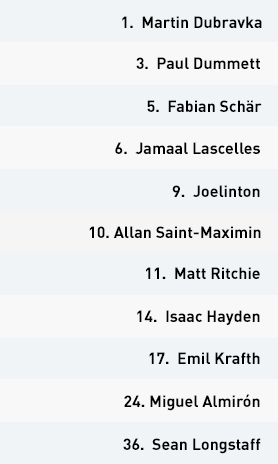 Mauricio Pochettino continued to tweak with Tottenham’s shape, this time favouring the 4-2-3-1 formation that featured Erik Lamela as his number 10. Newcastle’s compact and organised 5-4-1 mid-block remained very narrow early on, so central progressions for the home side were limited and Spurs therefore probed around the sides of that tight midfield through runs from Kyle Walker-Peters on the right and Son Heung-min on the left. That there were three central defenders around lone striker Harry Kane meant that when Tottenham aimed direct passes behind Newcastle’s wing-backs the closest defender stepped out towards the ball and nullified the potential threat.

The visitors’ first significant spell of possession involved the wing-backs pushing up and Spurs’ defence being stretched. Clever movement from their inside forwards away from that defensive line then created extra time and space around the double pivot of Moussa Sissoko and Harry Winks. Toby Alderweireld’s support of Walker-Peters on the right of the defence, and Danny Rose’s wider positioning at left-back, left Davinson Sánchez isolated against Joelinton, who was able to sneak in behind and finish beyond Hugo Lloris.


Pochettino’s team responded with further builds from the wider areas, which were reliant upon individual quality from Lamela and Son, targeting deeper crosses around Newcastle’s wing-backs and cutting out two of the three central defenders. Wasteful direct passes over the visitors’ defensive line easily conceded possession, and Spurs too often lacked a presence behind the visitors’ midfield.

When the frustrated Kane started to drop into the inside left channel, the hosts’ biggest goal threat was absent from the six-yard box and unable to detect the potential for cutbacks to take advantage of spaces between Newcastle’s defence and midfield. Tottenham also uncharacteristically struggled to increase the tempo of their counter-attacks, with Newcastle short of numbers from their otherwise organised block and so vulnerable against transitions.

The arrivals of second-half substitutes Christian Eriksen and Giovani Lo Celso provided the creativity Spurs had required in front of Newcastle’s central midfield, and they finished with multiple options in the central lane. Rose and makeshift full-back Sissoko provided width and, with further space in midfield, they were finally able to penetrate. But they lacked the finishing touch required to find an equalising goal and instead fell to their first league defeat of the season.

After Newcastle struggled to convince with their previous 3-5-2 formation, Steve Bruce organised his team into a defensive 5-4-1 formation for the trip to face Tottenham. Their mid-block attempted to limit the hosts’ opportunities in central areas by encouraging Miguel Almirón and Allan Saint-Maximin – who was replaced early by Christian Atsu – to play without width, close to central midfielders Sean Longstaff and Isaac Hayden. They also allowed Spurs to play around their defensive block, confident that their three central defenders could negate threats from wide areas without sacrificing the cover required in the middle.

On the rare occasions they had possession, Almirón or Atsu drove forward, attacking the spaces between the Tottenham central defenders and their attacking full-backs. Moussa Sissoko covered Kyle Walker-Peters’ attempts to advance from right-back, so Newcastle’s most regular successes came via Almirón on the opposite side. With Harry Winks largely being used as a central link, Danny Rose’s forward runs were not offered the same protection – but when the visitors worked possession forward they lacked the supporting numbers required to threaten.

They scored what proved the winning goal with their first significant period of possession. With Spurs’ defence stretched and both full-backs responsible for pressuring Newcastle’s wing-backs, Almirón and Atsu moved to receive around Spurs’ double pivot. These enhanced inside spaces offered more time to deliver into Joelinton, who had the time and space to control Atsu’s through ball before finishing beyond Hugo Lloris. Anticipating a response from Spurs, Newcastle’s 5-4-1 mid-block again shifted to discourage any build-ups from within central areas, contributing to multiple crossing opportunities – but ones that Bruce’s men were comfortable defending against.

The visitors adopted a much lower block for the second half, relying on their inside forwards to carry possession forwards after a regain. They often eventually lost possession, which left teammates out of position, but Spurs struggled to capitalise because of a lack of tempo in their own counter-attacks. For all of Newcastle’s resilience and commitment to that defensive block – their midfield four dropped deeper throughout the second half – they were perhaps fortunate that on the occasions they lost their compactness, the hosts wasted their opportunities.

Finally, Joelinton was particularly impressive; he chased loose balls or clearances to ease the pressure on the visitors’ defence, thus making a significant contribution to Newcastle’s first league points of the 2019/20 season.