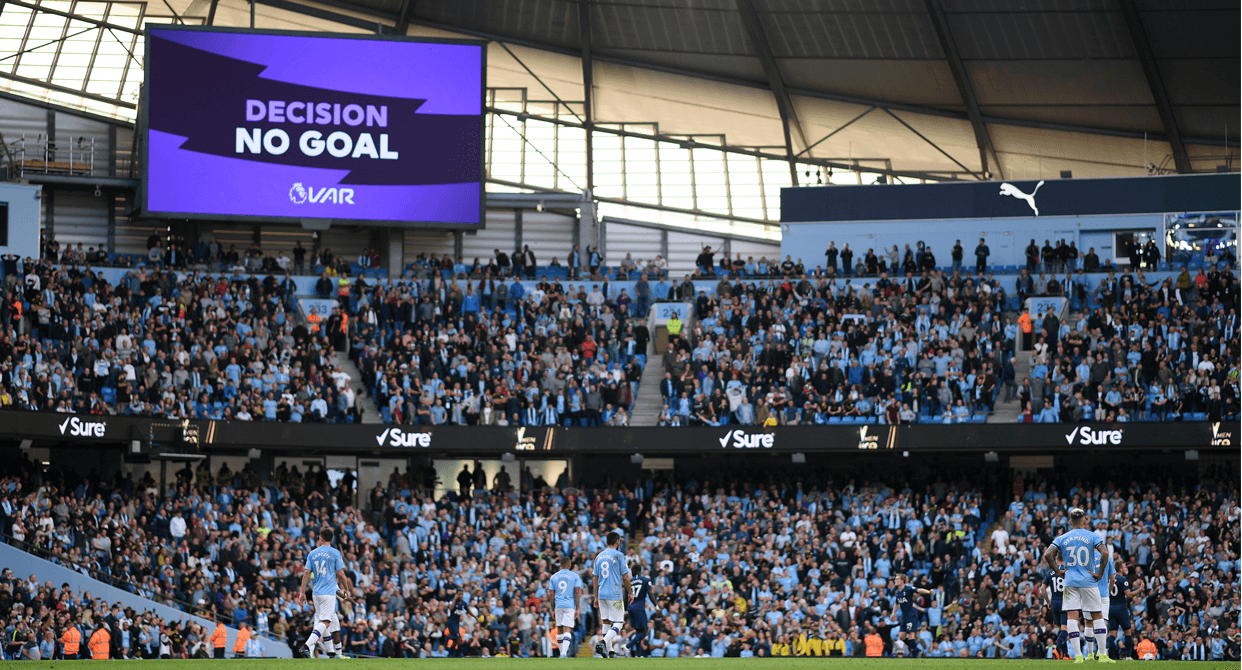 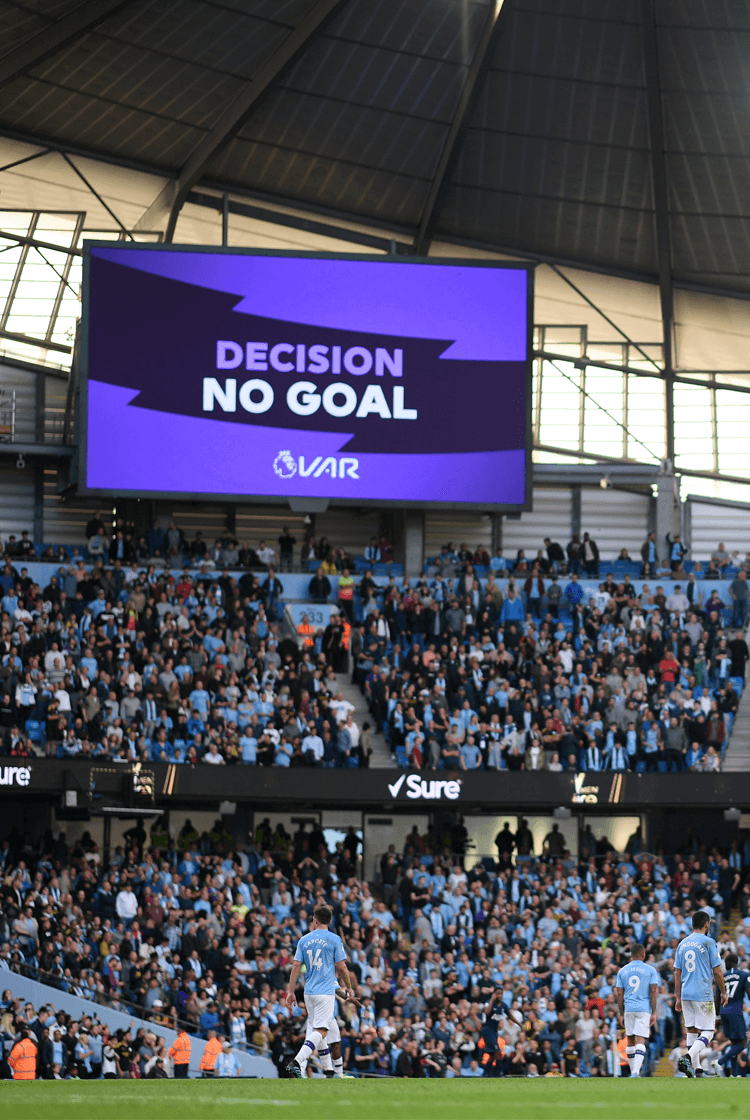 Premier League champions Manchester City dropped their first points of the season and handed Liverpool an early boost in their pursuit of the title when they were held to a 2-2 draw at home to Tottenham. For all of City’s dominance of possession and many chances, Spurs’ resilient defending restricted them to only two goals – both of which came in the first half from Raheem Sterling and Sergio Agüero, either side of an Erik Lamela strike for the visitors. The hosts’ profligacy was punished in the second half, when substitute Lucas Moura headed the visitors level. City substitute Gabriel Jesus had what would surely have been a late winner ruled out by the Video Assistant Referee. 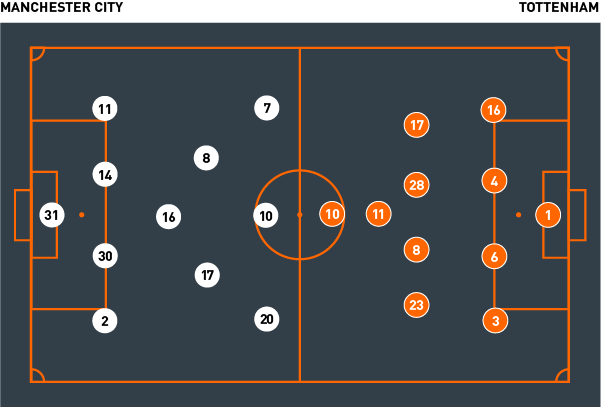 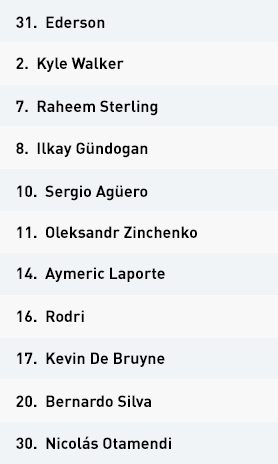 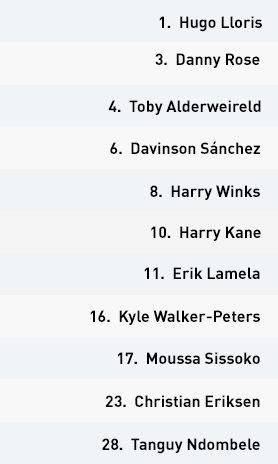 Manchester City started in an attacking 4-3-3 formation with Sergio Agüero starting as the central forward in between Raheem Sterling and Bernardo Silva. They quickly dominated possession, but Tottenham’s pressure on single pivot Rodri meant that City could then only build around the visitors’ mid-block.

To change their approach into the final third, left-back Oleksandr Zinchenko moved into a central position to create a double pivot with Rodri, and Sterling – from a wider starting position – complemented that by making curved forward runs in behind Spurs right-back Kyle Walker-Peters. Ilkay Gündogan simultaneously moved out wide into the space created by Sterling, giving Rodri and Zinchenko an alternative option around the visitors’ narrow midfield.

An alternative from the left involved Zinchenko darting forward as Sterling moved diagonally inside and away from Walker-Peters; Gündogan would then move deeper to create a second option around the under-pressure Rodri so that City could continue to penetrate around Spurs’ defensive 4-4-1-1 structure. Even if City’s personnel changed, their movements remained consistent; Ederson’s accurate distribution also discouraged the visitors from responding by pushing up.

The hosts’ width stretched the Tottenham defence, and a superb delivery from De Bruyne found Sterling free at the far post to give City the lead. Their subsequent conversion into a defensive 4-1-4-1 shape contributed to them conceding an equalising goal soon after, however; their inability to counter Spurs’ creative attackers, who rotated superbly between the lines, led to Erik Lamela’s strike from midfield.

De Bruyne soon advanced to accompany Agüero on the top line in what became a 4-4-2 formation out of possession. This higher starting position without the ball eventually gave him the chance to increase his impact with it, as yet another superb delivery found Agüero free to restore the hosts’ lead before half-time.

More advanced positioning from Harry Kane and Lamela in the second half freed up Rodri to link with his central defenders. This worked to increase both City’s dominance and the pressure on the Tottenham goal, so it came as some surprise when substitute Lucas Moura headed Spurs level.

City responded again by dropping Rodri into their defensive line and pushing further players behind Tottenham’s four-strong midfield. This led to still more goalscoring chances, but their inability to take them – and a late disallowed goal from Gabriel Jesus – meant victory eluded the Premier League champions for the first time in the league since January.

Mauricio Pochettino set Tottenham up in a shape that switched between 4-4-1-1 and 4-2-3-1, but which focused on blocking the central lanes during the hosts’ attempted build-ups. Harry Kane joined Erik Lamela in restricting direct access from Manchester City’s central defenders into Rodri’s feet – Lamela remained close to the Spaniard to prevent attempts to bypass Kane as the first presser.

The visitors enjoyed only rare spells of possession; when they did, Christian Eriksen looked to drift in from his starting position on the left and offer penetrative runs. Lamela often dropped deeper, his movement aimed at drawing a City defender out, which in turn acted as a trigger for Kane to aim runs in behind them. The England captain was too often isolated, however, and the deeper the hosts forced Spurs’ defensive block the harder the visitors found it to threaten on the counter-attack.

They remained composed under City’s attempted higher press, however, with Harry Winks’ mobility alongside Tanguy Ndombele in the centre of midfield working to secure possession and building the base they used to patiently expand and encourage their full-backs to play with greater width. Eriksen, Lamela and Moussa Sissoko rotated across the three central lanes into positions behind the City midfield; it was from one such rotation that Lamela received possession, advanced and struck beyond an oddly positioned Ederson for their first equaliser.

Spurs’ commitment to a higher press during the second half inadvertently led to multiple attacks by their opponents, who eased around or over that press and consequently enjoyed huge spaces into which their midfield runners could drive. Hugo Lloris repeatedly prevented City from extending their lead, before substitute Lucas Moura headed home a surprise second against the run of play.

Pep Guardiola’s team responded by committing further numbers forward, but Spurs’ resilient defending and some well-timed transitions out of defence – often via the fresh Moura – relieved the pressure enough on their way to securing a hard-fought point.