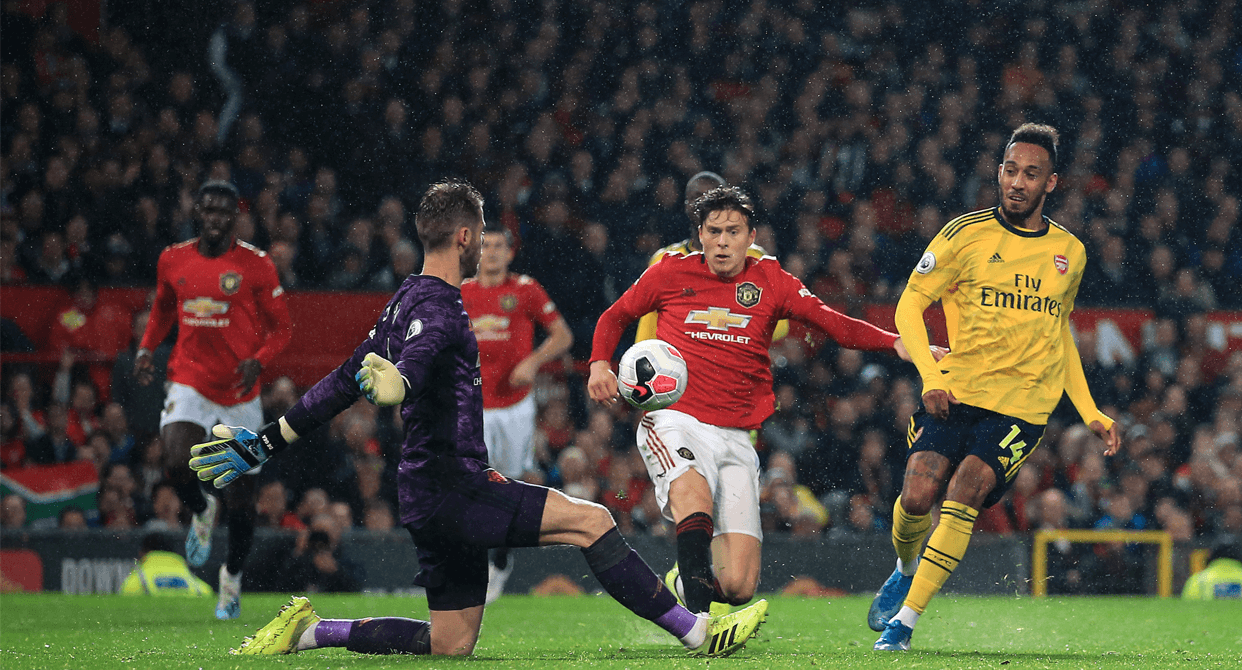 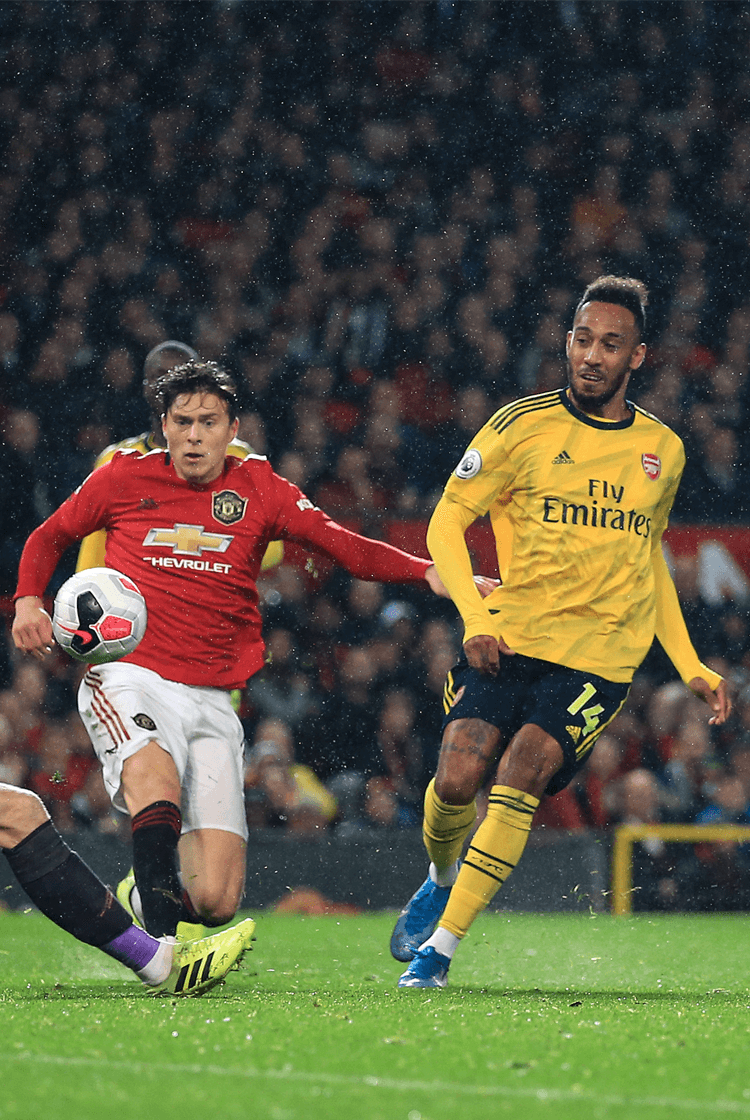 Manchester United and Arsenal fell further behind the Premier League top two after a disappointing draw at Old Trafford, ensuring the hosts’ worst start to a season for 30 years. Scott McTominay’s goal on the stroke of half-time had put Ole Gunnar Solskjaer’s team on course for a valuable three points, but Pierre-Emerick Aubameyang brought Unai Emery’s side level in the 58th minute and neither team could find a winner. Aubameyang became the first Arsenal player to score seven or more goals in the first seven Premier League fixtures of a season since the great Dennis Bergkamp in 1997/98, while United’s record of 49 points from 28 matches under their Norwegian head coach is two fewer than they managed in their final 28 games under Jose Mourinho. 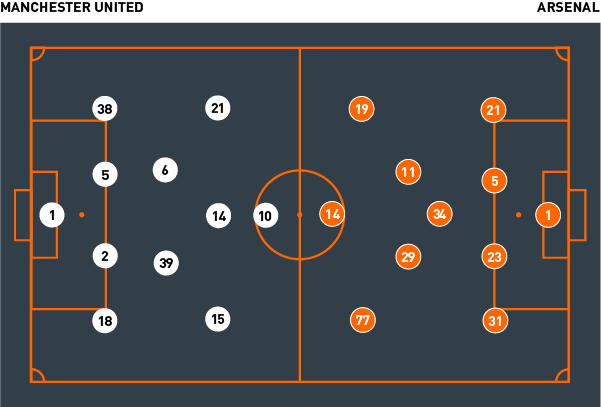 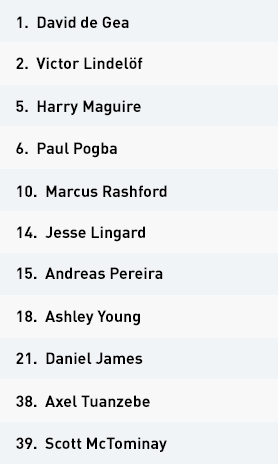 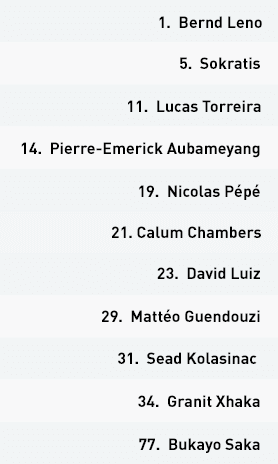 Manchester United used the 4-2-3-1 formation that has largely been favoured by Ole Gunnar Solskjaer since his return to Old Trafford. Scott McTominay and Paul Pogba formed the double pivot in front of his defence, while Marcus Rashford operated as a lone striker in front of the recalled Jesse Lingard.

The hosts again struggled to create quality goalscoring chances, and were forced into switching play and bouncing passes between midfielders facing their own goal in an attempt to penetrate. They pursued spaces between Arsenal’s defence and midfield, looking for two-on-ones against Granit Xhaka and using rotations within midfield to draw opponents from their compact shape and thus create spaces.

One of McTominay or Pogba would withdraw towards possession while the other advanced into a space created by a further teammate drawing Xhaka, from where they would receive. When possession was between the lines, United’s full-backs would advance to receive on the outside, owing partly to Arsenal’s priority to cover the United front four.

Those crosses into the penalty area were too often ineffective, however, particularly when they still represented their most consistent threat. Rashford drifted wide to rotate with wide attackers Andreas Pereira and Daniel James, but in doing so he rarely received possession in goalscoring positions; James and Pereira are capable dribblers, but they were often crowded out. United also carelessly conceded possession with forward passes that lacked the necessary weight and direction to find their target.


Arsenal operated with a 4-5-1 mid-block while defending; Xhaka was used between defence and midfield, often essentially forming a 4-1-4-1, while Pierre-Emerick Aubameyang provided the focal point in the final third. The visitors were content with United’s central defenders Harry Maguire and Victor Lindelöf having possession, however; Aubameyang would monitor them to deter a teammate from advancing and creating space.

From between the lines, Xhaka would occupy Jesse Lingard, cover Arsenal’s more advanced central midfielders and restrict passing lines into the United attack. When the hosts played wide, Arsenal became compact around possession to limit their opponents’ progress to switches of play or towards the sidelines. Here, the visitors could press, and their wide midfielder and full-back on each side could combine to prevent easy crosses. The defensive line coped well with any crosses United did manage to send in, however.

While they had possession, Unai Emery’s Arsenal played in a 4-3-3 formation that was largely determined by the positioning of central midfielders Granit Xhaka, Mattéo Guendouzi and Lucas Torreira. They struggled to maintain possession during a first half in which their only attacking threat came during transitions; indeed, their equalising goal, which came during the second half, owed to a transition that capitalised on an error in possession by Manchester United.

Their attempts to build from defence were ineffective; a lack of movement ensured United’s man-oriented pressing was easy to execute and that the visitors were forced into rushing inaccurate passes. It was after an unconvincing performance during the first half that Arsenal began to prioritise playing wide to draw United’s full-backs and then progress beyond them. That the Gunners’ attackers regularly received possession with their backs to goal encouraged the hosts’ defenders to press them, but this was complemented by movements into space for the receiver of the next pass; when they advanced beyond a defending full-back, they then sought to play low crosses into the penalty area for attacking runners. Few quality chances were made in this way, although this did represent their most successful tactic.

United either pressed in a 4-2-3-1 or used a 4-4-1-1 mid-block while defending; when in a 4-4-1-1, Andreas Pereira and Daniel James tucked in alongside Paul Pogba and Scott McTominay, while Jesse Lingard remained in an advanced position to support Marcus Rashford, or even join him on the same line. In the 4-2-3-1, Rashford focused on closing down the central defender in possession.