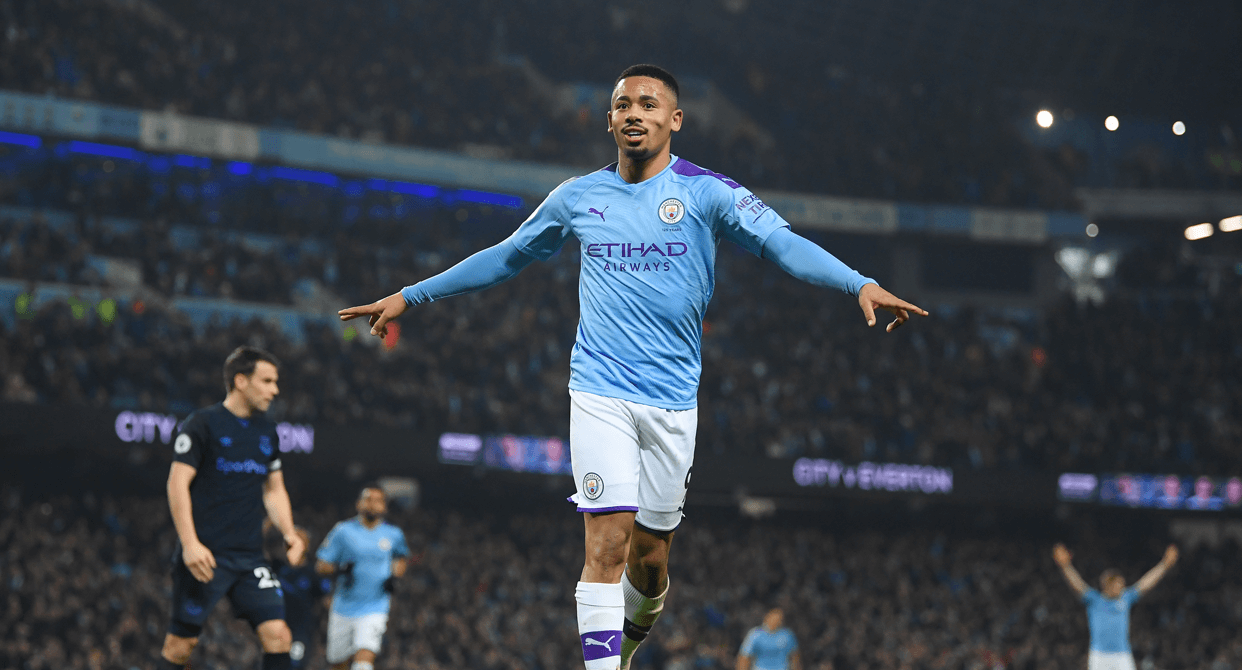 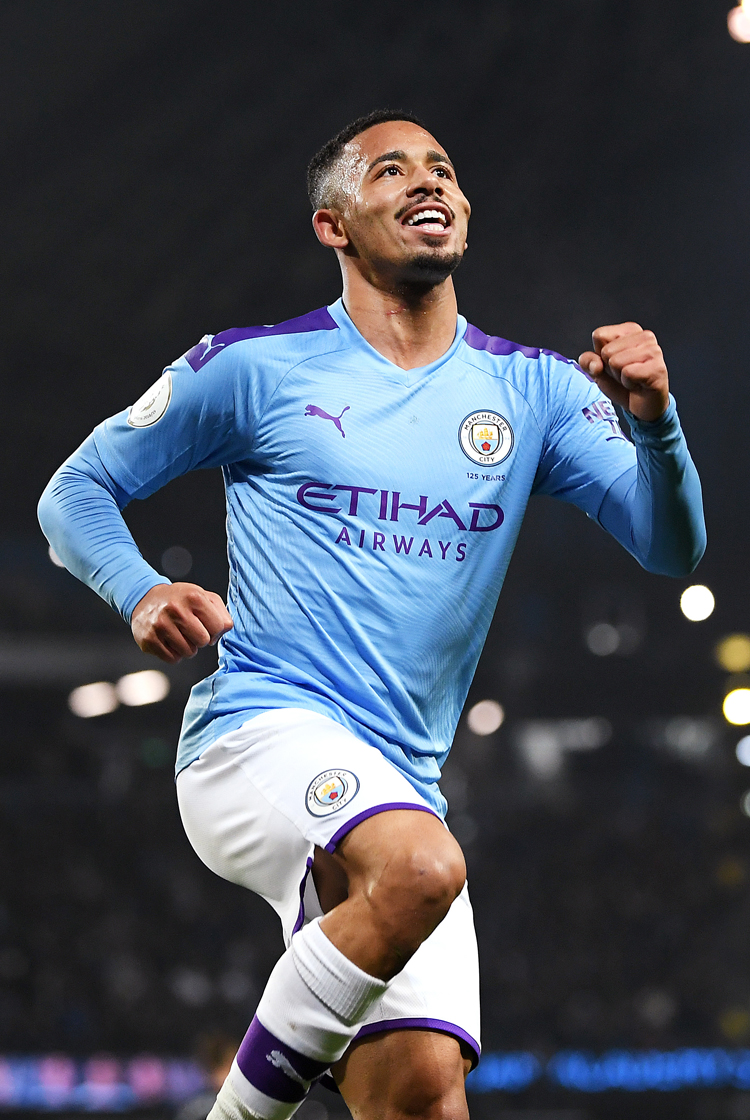 Champions Manchester City recovered from their shock defeat to Wolves with a 2-1 win at home to a Everton, who lost for the first time under their new manager Carlo Ancelotti. Pep Guardiola included both Phil Foden and Eric Garcia in his starting line-up, and the former believed he had given them the lead during the first half, only for the Video Assistant Referee (VAR) to rule his strike out for offside. City finally took the lead early in the second half, when Ilkay Gündogan played in Gabriel Jesus, who sent an excellent right-footed finish beyond Jordan Pickford. The Brazilian looked to his left side for the strike that doubled their lead seven minutes later; although the visitors also scored – Richarlison was the goalscorer after a goalkeeping error by Claudio Bravo – they were unable to find the second they required. Victory kept City one point behind second-placed Leicester City; Liverpool remain an intimidating distance clear, from first. 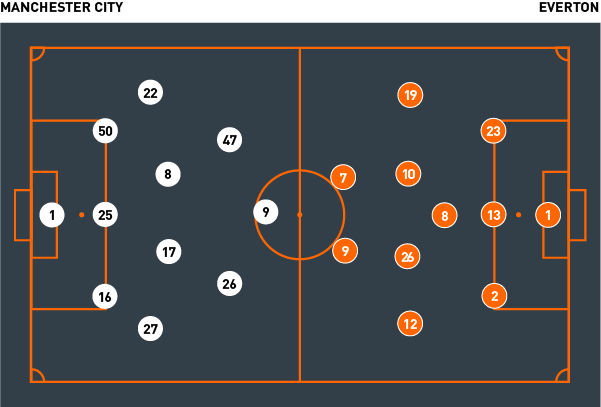 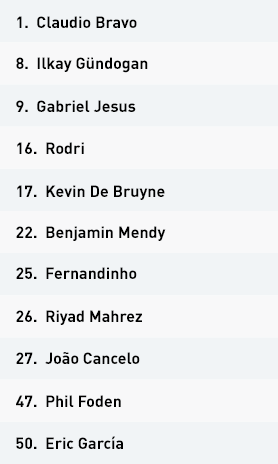 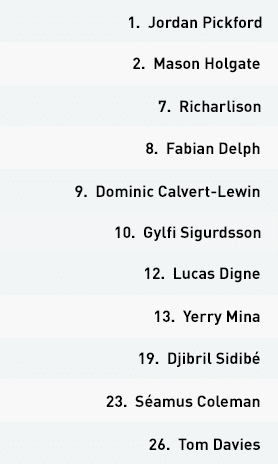 Pep Guardiola set his Manchester City team up with a back three for their final league clash of the festive period. Fernandinho, Rodri and Eric Garcia started in the back line, with Benjamin Mendy and João Cancelo as wing-backs looking to get in behind the Everton midfield; Phil Foden and Riyad Mahrez operated as two narrow number 10s in support of their lone striker, Gabriel Jesus.

When either Foden or Mahrez moved wider, their supporting wing-back stepped inside. This worked to drag Everton’s wider central defenders away from their position in the back line, creating gaps for City to slide balls in behind for Jesus and the number 10 from the other flank. One such move on the right wing created a chance for Foden to step inside from the left and shoot, but his effort was ruled out, owing to Mahrez being offside.

Wider combinations continued to prove most effective for City, with Everton’s increasingly compact and reduced block prioritising central spaces. When Foden and Mahrez offered third-number combinations around Everton's wing-backs, however, City struggled to create chances inside a congested penalty area. Kevin De Bruyne’s deeper role in midfield limited his ability to deliver the dangerous crosses that create so much for his team.

When Everton tried to build from deep, Jesus and the two number 10s moved to the visitors’ back three, with De Bruyne often the midfielder advancing to the single pivot, Fabian Delph. Under this pressure, Everton moved to a more direct pattern of forward play, but the hosts’ back three outnumbered Richarlison and Dominic Calvert-Lewin and were able to deal with the majority of first and second balls.


City continued to probe and threaten from the inside channels in the second half, and their quality soon led to the opening goal. Ilkay Gündogan’s incisive, splitting pass carved through Everton’s low block, with Jesus providing a clinical finish into the top corner. The Brazilian soon doubled his side’s lead after a pass from Mahrez; despite all of City’s good work through the wider spaces, it was two central combinations that created the chances from which they scored both of their goals.

A mistake in possession from overconfident goalkeeper Claudio Bravo created the defensive confusion from which Richarlison scored for Everton. The visitors subsequently pressed higher as they chased a second goal, with City responding by dropping more players towards the ball, when in possession. Combinations into the double pivot, and then wide into the wing-backs, worked to avoid the increased pressure and regain control.

The hosts should have scored again when Jesus, chasing a hat-trick, struck the post. They regardless held on in relative comfort to register a third straight home victory, since their shock defeat in the Manchester derby.

Carlo Ancelotti organised Everton into a 3-1-4-2 formation. Fabian Delph operated as the deepest central midfielder, supported by Gylfi Sigurdsson and Tom Davies, behind a front two of Dominic Calvert-Lewin and Richarlison.

Despite prioritising a deeper build, the visitors struggled to create from the back; Jordan Pickford resorted to more direct balls into the withdrawing Calvert-Lewin, who initially looked to move into Kevin De Bruyne’s central midfield slot as the Belgian advanced to pressurise Delph. Ilkay Gündogan was thus forced to cover both Sigurdsson and Davies, but their lack of movement meant Everton too often failed to find the theoretical free number.

Everton naturally spent a considerable period out of possession, dropping into a 5-3-2 structure that covered the three central lanes at all times. Calvert-Lewin and Richarlison remained as the two highest targets ready to compete for clearances, but primarily acted as a second screen to block the hosts’ double pivot. City were superb at penetrating through Everton’s midfield, however, as the movements of Foden and Mahrez repeatedly pulled Everton’s back line out of shape. Despite this, it wasn’t until the 50th minute that the home side finally found a way through the visitors’ compact defensive shape.

Everton’s own build showed more threatening signs in the second period, as Sigurdsson adopted a deeper role alongside Delph, in a double pivot designed to receive between City’s pressing front three. The visitors then lacked sufficient depth and width in attack, with the wing-backs inconsistent in their support – especially when one of the front line withdrew to bounce and connect through the inside channels.

Ancelotti soon introduced both Theo Walcott and Moise Kean and shifted his side into a 4-2-3-1, with Davies joining Delph within their double pivot. Fresher legs, and a more aggressive mindset to press the hosts’ back three, contributed to the defensive errors that enabled Everton to score with 20 minutes remaining. They were unable to maintain enough consistent and co-ordinated pressure on City's build-up to create the chances from which they might have found an equaliser goal, but the manager will still have found much to be encouraged about in his new team’s performance.