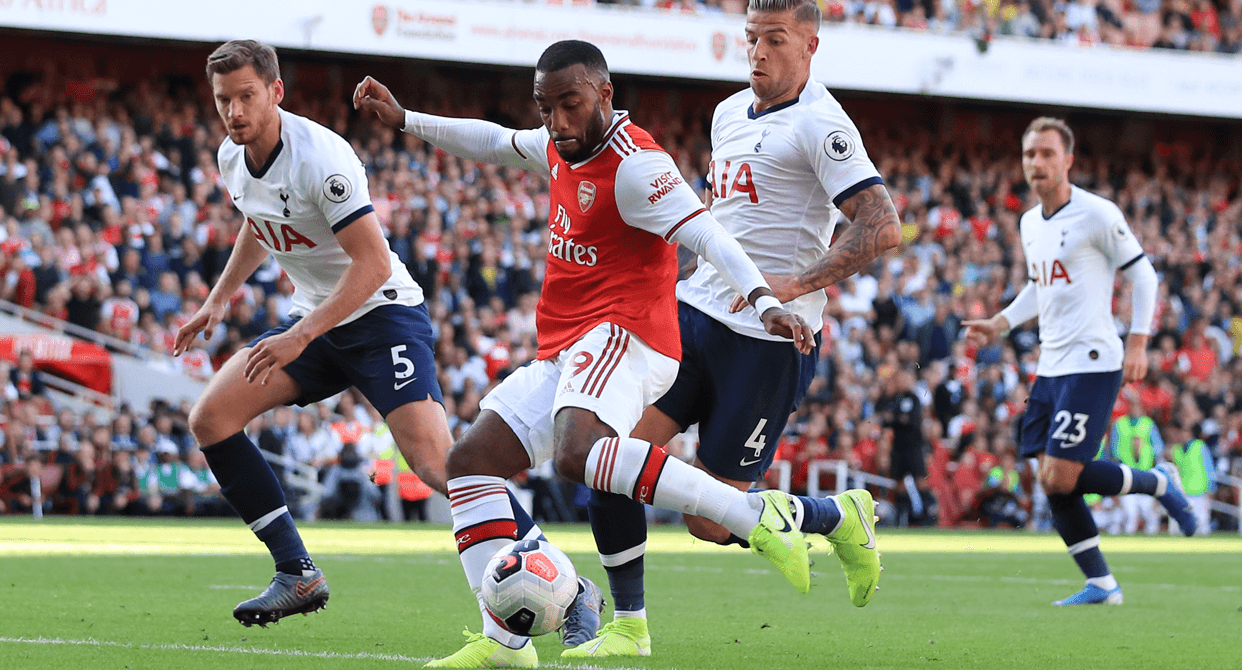 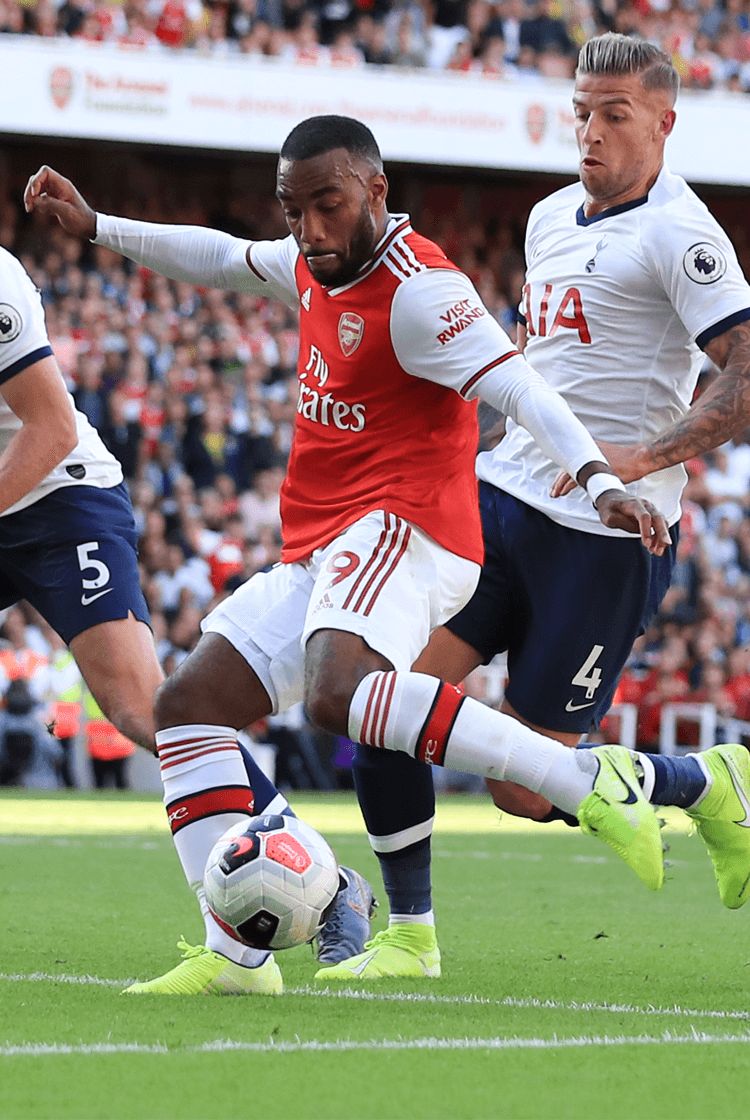 Arsenal denied rivals Tottenham a victory capable of dispelling concerns surrounding their inconsistent start to the season when they recovered from two goals down to secure a 2-2 draw in a pulsating north London derby at the Emirates Stadium. First-half finishes from the recalled Christian Eriksen and Harry Kane, from the penalty spot, put Spurs on course for three vital points, but Alexandre Lacazette’s strike on the stroke of half-time gave Arsenal the encouragement they needed to secure their route back into the game. The Gunners had twice forced fine saves from Hugo Lloris by the time Pierre-Emerick Aubameyang finally brought them level with 19 remaining minutes – after which Sokratis Papastathopoulos had an effort disallowed and Kane had a penalty claim turned down by referee Martin Atkinson at the other end. Heading into the international football break, Arsenal sit fifth, two points ahead of ninth-placed Spurs. 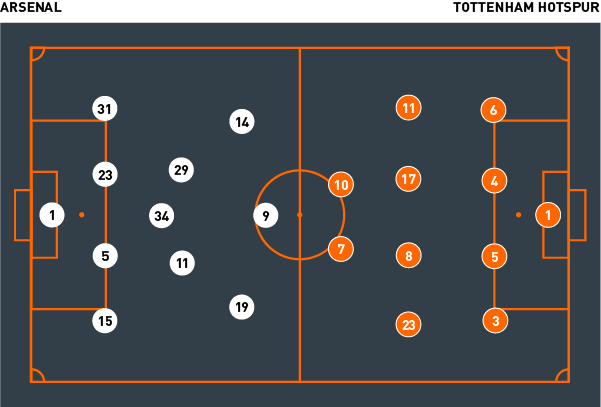 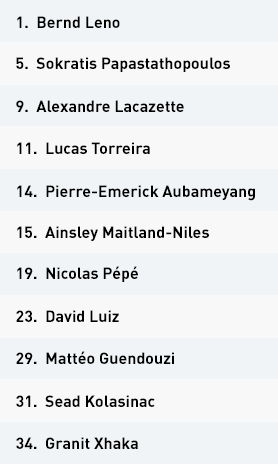 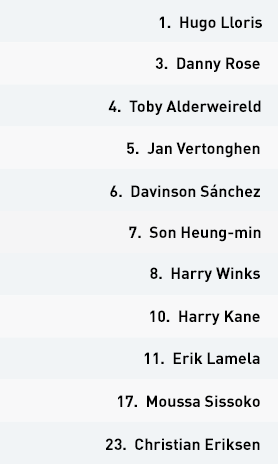 Unai Emery organised Arsenal into a 4-3-3 formation led by the potent front three of Nicolas Pépé, Alexandre Lacazette and Pierre-Emerick Aubameyang. They initially looked to release Aubameyang and Pépé in behind as early as possible in an attempt to capitalise on their pace; with central midfield congested, the wide areas represented the most suitable territories to attack.

The hosts also prioritised switches of play, with full-backs Ainsley Maitland-Niles and Sead Kolasinac expected to support the front three in wide areas. Their midfield lacked balance in the first half, however; Mattéo Guendouzi, Lucas Torreira and Granit Xhaka moved as individuals, rather than in relation to each other and their teammates. This would cost Arsenal dear during moments of transition.

That balance, and the quality of their attacks, improved in the second half. They looked to drop Lacazette into deeper areas, and get Pépé and Aubameyang to advance; this worked to restrict Tottenham’s defensive line and act as a trigger for the full-backs to advance. The Gunners struggled to penetrate in central areas, so they continued to play with width, particularly that provided by Kolasinac and Maitland-Niles.

Despite having double the number of shots of their visitors, however, the technical detail of Arsenal’s build-ups lacked quality – passes were frequently played behind their intended target, slowing down attacks. A lack of understanding between those in attacking phases led to moves breaking down, even if this steadily improved as the game wore on.


Tottenham used a 4-4-2 without possession, in which Christian Eriksen and Érik Lamela tucked in alongside Moussa Sissoko and Harry Winks in midfield. Harry Kane and Son Heung-min were used either side of Granit Xhaka, and occasionally advanced ahead of him to pressure central defenders David Luiz and Sokratis Papastathopoulos.

When possession travelled to Maitland-Niles or Kolasinac, Eriksen or Lamela moved across to apply pressure with Sissoko and Winks; the spare wide midfielder then tucked in to pick up Arsenal’s central midfielders. If the ball stayed central, Eriksen was positioned between Maitland-Niles and Torreira, Winks between Torreira and Xhaka, Sissoko between Xhaka and Guendouzi, and Lamela between Guendouzi and Kolasinac. This meant they could apply pressure from two sides if the ball was played centrally, and force play towards the touchline if it was sent wide.

The risk for Tottenham came in defensive transitions, because their structure in possession left them vulnerable in wider areas. They therefore looked to immediately pressure the ball-carrier during transitions, but their defence was reluctant to advance because of the threat posed by Arsenal’s attack. As play progressed and they were put under increasing pressure, Spurs became deeper and more compact in central areas, in an attempt to both prevent Arsenal playing through them and to negate the threat the hosts posed out wide.

Mauricio Pochettino set Tottenham up in a 4-2-2-2 formation in possession; in the absence of the injured Tanguy Ndombele, Moussa Sissoko and Harry Winks were the first line ahead of the back four, with Christian Eriksen and Érik Lamela positioned ahead of them. They sought counter-attacking opportunities, which contributed to their first goal, but were largely risk-averse in possession, and regularly used only four attackers.

Harry Kane, Son Heung-min, Lamela and Eriksen – and later Dele Alli – took creative responsibility. Their positional structure meant that their four attackers often played on different lines, which made them difficult to mark with a compact defence. They also looked for their most advanced players, so that they could set the ball to a forward-facing attacker capable of continuing that attack.

Spurs struggled to play out from the back during the first half, particularly from goal-kicks, where they came under intense pressure. They instead started to advance their full-backs beyond the first line of Arsenal’s press, and to clip possession towards them, attracting Arsenal’s outside central midfielder and freeing up Sissoko or Winks – also ahead of Arsenal’s first line – to receive while facing forwards and looking for the next penetration.

The visitors should in theory have had a four-on-three central overload, but the Arsenal front three often dropped when Spurs looked to build to prevent that. The Tottenham full-backs would then attempt to draw individuals away from Arsenal’s midfield in a bid to create spaces inside.

Arsenal set up in a 4-3-3 shape out of possession, which switched between a high-press and a mid-block depending on the Spurs build-up. When their opponents took goal-kicks or attempted build-ups, they respectively used Nicolas Pépé and Pierre-Emerick Aubameyang to press Jan Vertonghen and Toby Alderweireld, curving their runs to screen the pass outside into their full-backs and encouraging them to play inside.

Alexandre Lacazette was positioned between Sissoko and Winks, and pressured whichever of them received a pass, with Arsenal’s midfield three maintaining a compact line behind him. If Tottenham moved the ball to their full-backs, Davinson Sanchez on the right would then be pressed by Guendouzi and Aubameyang, with left-back Danny Rose the responsibility of Torreira and Pépé.

Arsenal were often overly man-oriented in the first half, however. Because their defenders dropped with Son or Kane, they were vulnerable to forward runs off the ball into the spaces that had been vacated – particularly from Eriksen and Lamela, both of whom were involved in Tottenham’s opener.