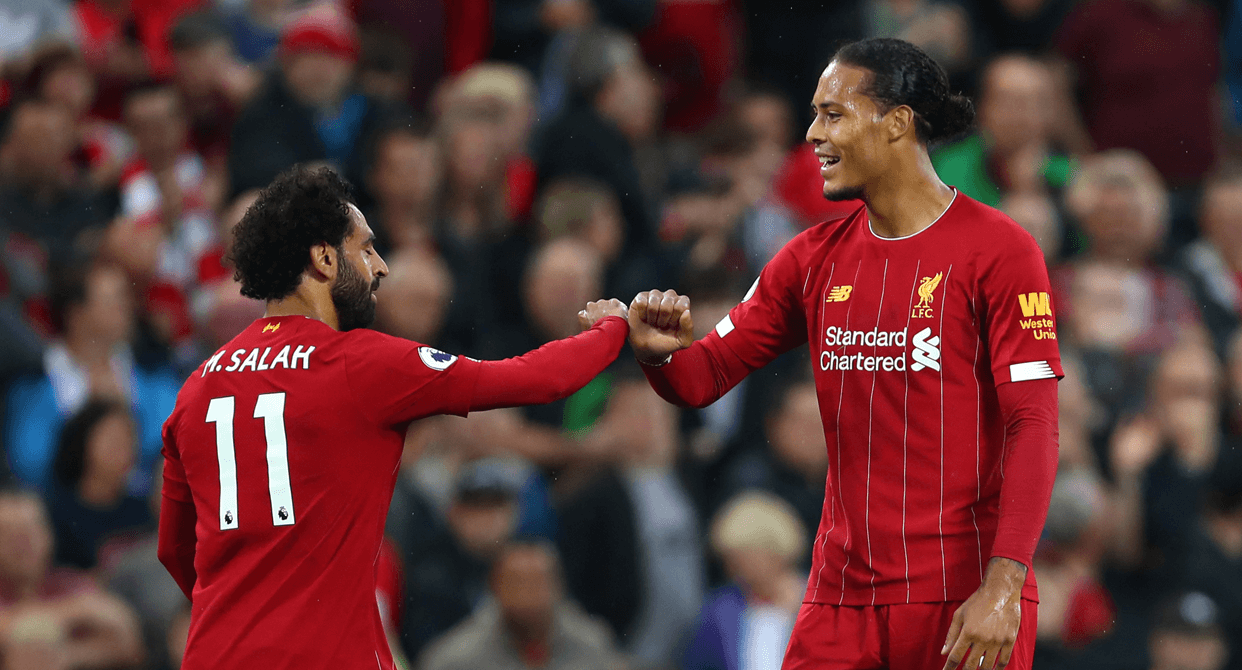 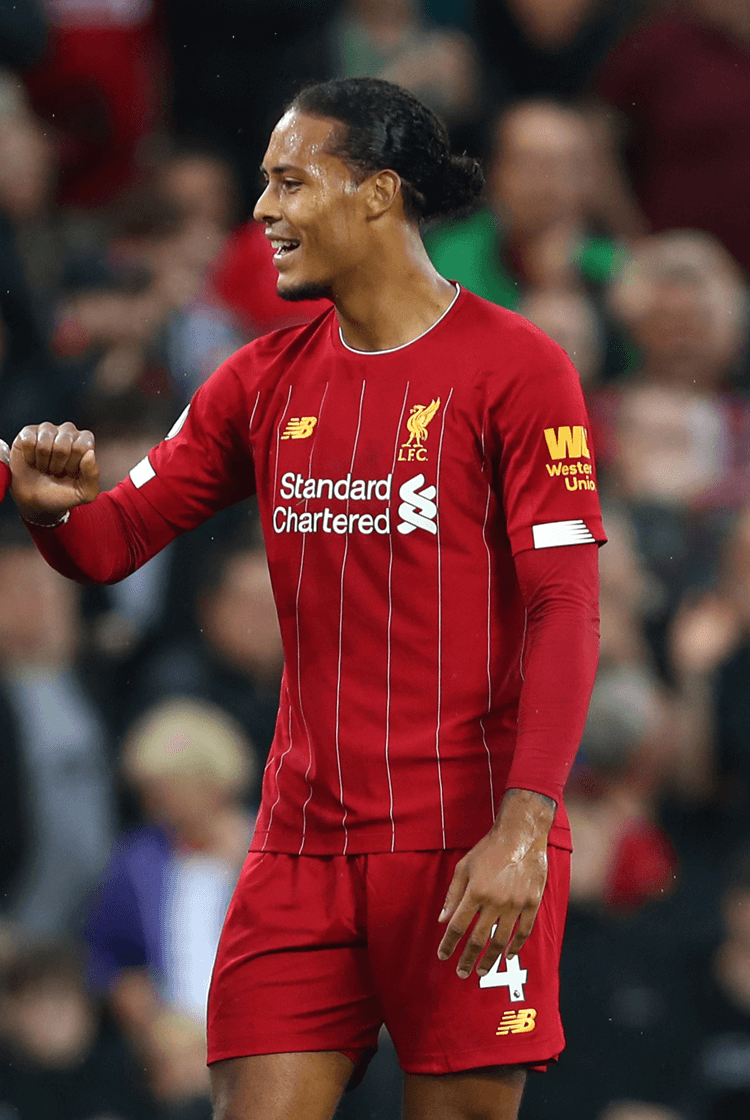 Liverpool eased to victory over newly promoted Norwich City as they began their assault on the 2019/20 Premier League title. What was already expected to be a challenging evening for the visitors – of Liverpool’s leading players, only Sadio Mané did not make their starting XI – was made even more difficult from only the seventh minute when Grant Hanley put through his own goal. In an increasingly open affair, Mo Salah and Virgil van Dijk had added further finishes by the time Jürgen Klopp’s team lost Alisson to injury – and Divock Origi’s goal ensured that they led 4-0 by half-time. Teemu Pukki reduced the deficit by scoring Norwich’s first of the season in the 64th minute, past Liverpool debutant Adrian, but his goal ultimately proved little more than a consolation. 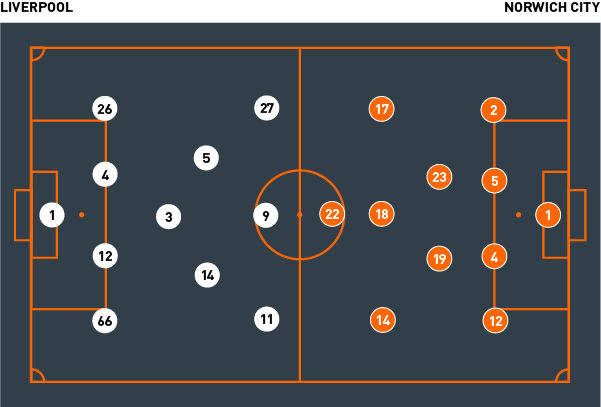 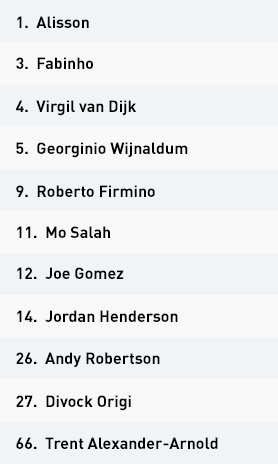 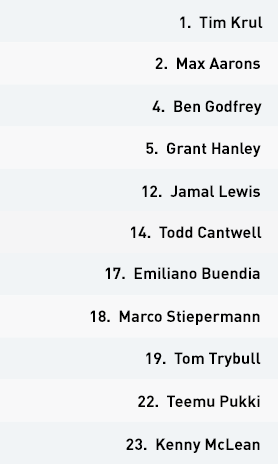 Liverpool started with the same starting XI and 4-3-3 shape they used in the Community Shield against Manchester City, when Divock Origi again deputised for Sadio Mané on the left of their front three – which perhaps contributed to the way they attacked down the right wing even more than they did the left. Attempting to exploit the space between defenders Ben Godfrey and Jamal Lewis, the understanding between Trent Alexander-Arnold, Mo Salah and Jordan Henderson proved a significant asset. Salah often dropped into wide areas to receive possession to feet and attract Lewis, at which point Henderson would run beyond the full-back and on to a pass from Salah – who would then make a further run to again receive.

Alexander-Arnold’s aggressively advanced positioning also often forced Todd Cantwell back from his position on the left of the Norwich midfield into what became a five-strong defensive line. This presented Salah with the freedom to withdraw from Liverpool’s attacking line, in an attempt to receive in space in front of a Norwich defence that was reluctant to stray from its defensive line. Salah was then able to drive forward, making runs amid and beyond the Norwich back line. The visitors’ struggles to negate those runs, combined with an element of chaos, led to Salah scoring the Reds’ second goal.

Liverpool’s fluid movement and positional interchanges meant that they regularly progressed through Norwich’s midfield; Roberto Firmino also withdrew into deeper areas to create a three-on-two with Georginio Wijnaldum and Henderson against Tom Trybull and Kenny McLean. This awareness, and the timing of the hosts’ movement and passes, were used to distract their opponents while the Liverpool midfielders or full-backs moved beyond Norwich’s midfield to receive the next pass. Once they had built their four-goal lead, however, they became more reserved in the second half.

Norwich were largely organised into a 4-4-2 when they were out of possession; Marco Stiepermann joined Teemu Pukki up front while Cantwell and Emiliano Buendia dropped to join McLean and Trybull in a midfield four. They struggled to maintain the aggressive press they began with, instead favouring a mid-block, and were vulnerable to overloads of three against two in midfield if Stiepermann and Pukki pressed centre-backs Joe Gomez and Virgil van Dijk. Klopp’s defence was also capable of playing the ball over Norwich’s press towards Henderson, who was often free between lines, or one of the full-backs – who became free if a defending midfielder dropped to follow Liverpool’s captain.

By then dropping off from Pukki and Stiepermann – to either side of Fabinho – McLean and Trybull could follow Henderson and Wijnaldum, but the movement of Liverpool’s midfield drew them and therefore opened up spaces in front of their defence. The interchanges encouraged by Klopp similarly left Norwich having to pass players on to teammates, and essentially struggling when overloaded in central areas with the timing of when to pass individuals on.

Liverpool’s success in disorganising their opponents’ defence contributed to Norwich adopting a 4-1-4-1 formation in the second half. This gave them more cover in central positions and worked to negate the overloads that had exposed them, although with the game gone that was only in the pursuit of damage limitation against a Liverpool side that had long since wrapped up the points.

Norwich set up in a 4-2-3-1 formation in possession, with Tom Trybull and Kenny McLean as the two deep central midfielders; Emiliano Buendia, Marco Stiepermann and Todd Cantwell supported lone striker Teemu Pukki. They attempted to play vertically, making forward runs and playing forward passes intended to get their attacking players into attacking positions as quickly as possible.

They kept two central midfielders behind the ball, and encouraged full-backs Max Aarons and Jamal Lewis to push up to add width while Cantwell, Stiepermann and Buendia remained in central positions behind Pukki. That triumvirate’s fluid movement and the speed of their passes tested Liverpool; Pukki also made intelligent, threatening runs behind the hosts’ defence, generally from a starting point between defenders.

During build-ups, Trybull and McLean joined Tim Krul, Grant Hanley and Ben Godfrey to create a five-on-three overload against Liverpool’s dangerous front three. This enabled them to bypass the first line of Liverpool’s press, until the hosts adapted by pushing their midfielders further forward. This then forced Krul to target his full-backs and forwards with clipped passes that were easier to deal with, particularly through the aerial ability of Virgil van Dijk. In the second half, Norwich were largely restricted to counter-attacks; though they got on the scoresheet through Pukki, defeat was by then almost inevitable.

Liverpool’s 4-3-3 shape was consistent regardless of whether or not they had possession. They started by using Divock Origi, Mo Salah and Roberto Firmino to respectively close down Hanley, Godfrey and Krul. When Norwich began to play through midfield, they adapted by using Jordan Henderson and Georginio Wijnaldum to press that midfield and prevent them from turning. Henderson and Wijnaldum didn’t man-mark the Norwich midfielders because they also had to press the full-backs when Krul was forced to play possession towards them.

The hosts struggled with the intelligence of some of Norwich’s movement and passing, contributing to the chances that forced some good saves from Alisson before the Brazilian departed with a calf injury. They were also uncomfortable with Pukki’s consistent runs, as was demonstrated when one such run led to the visitors’ only goal.