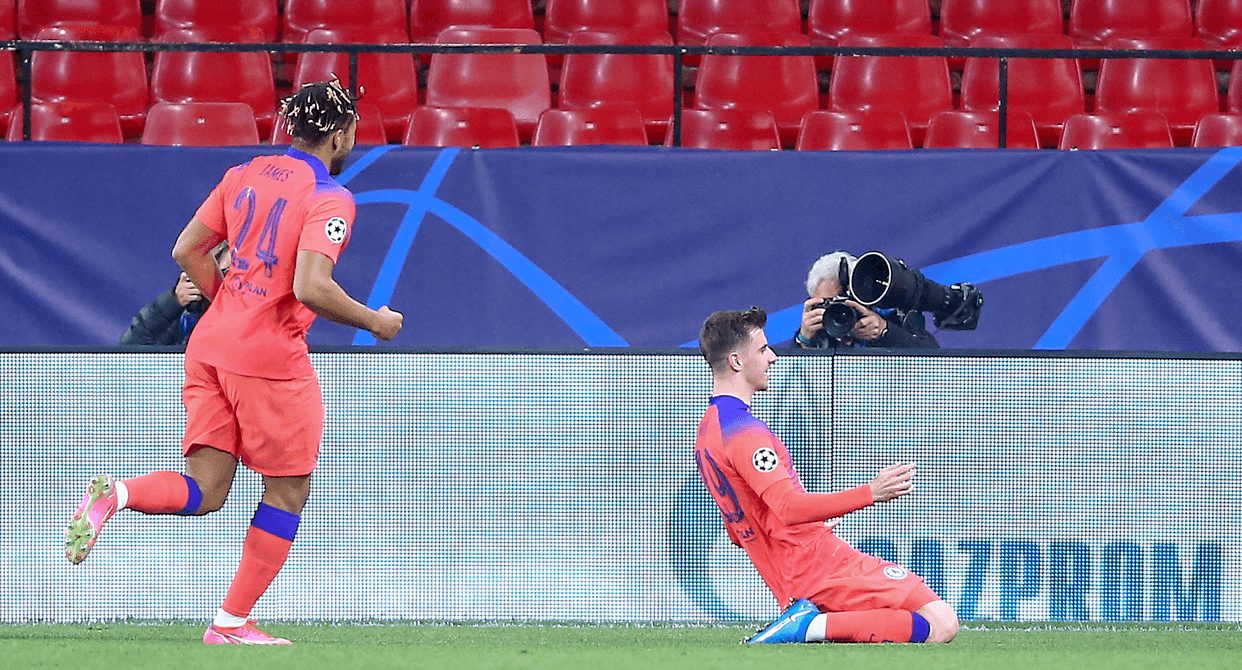 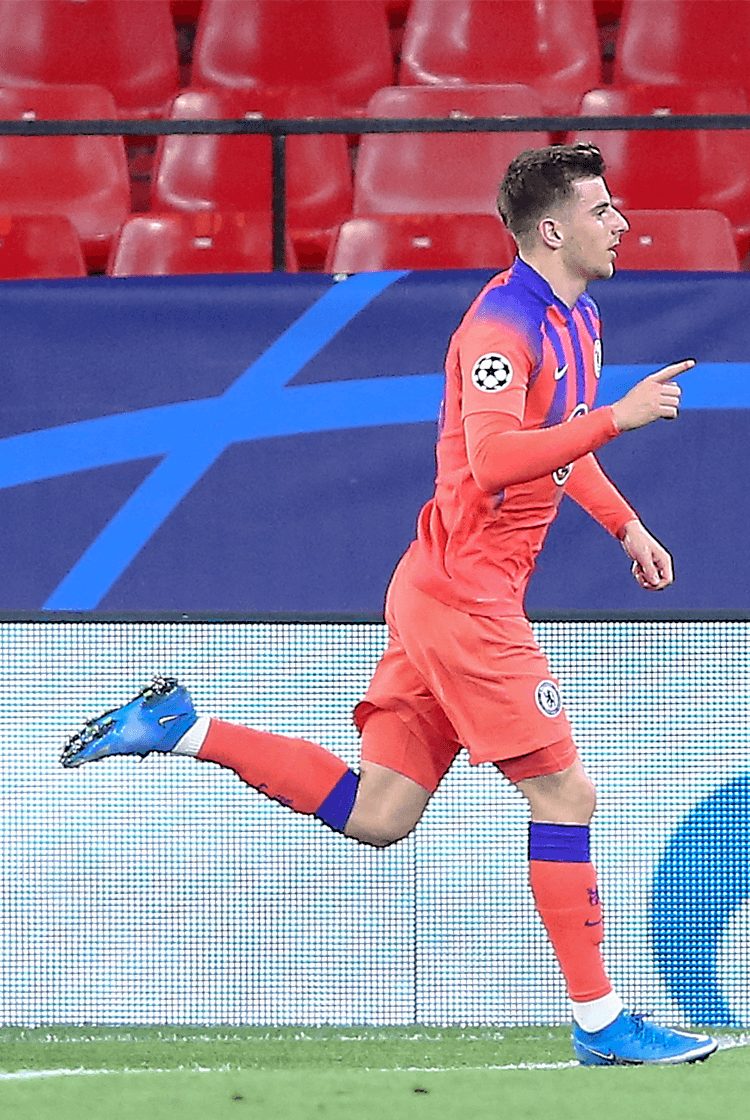 Chelsea responded to their shock defeat by West Brom to build a commanding lead to take into the second leg of their Champions League quarter final with Porto. Mason Mount struck in the first half, and Ben Chilwell late in the second, as they provided the latest demonstration of their status as potential contenders for a competition their manager Thomas Tuchel almost won with Paris Saint-Germain. "(Mount's goal) came in a moment after which we had suffered a lot – the team was too tense," Tuchel said. "We lacked the freedom. Our game was a bit static. He has the quality to do this and to do it in a quarter final is a big step for him and a big help for the team. He is a very important player for our squad at a young age. The first goal was very important for us." His opposite number, Sérgio Conceição, said: "The team played a great match, always consistent in defence, creating danger in attack and aware of when to press high and when to lower the lines. Considering what was planned, the players were fantastic." 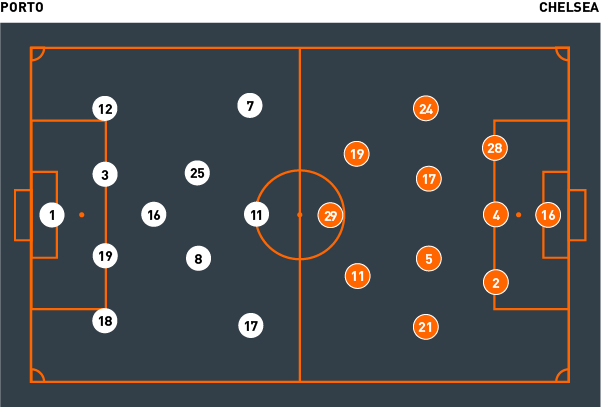 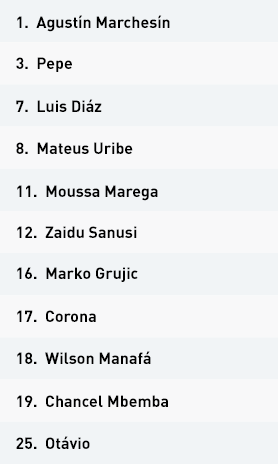 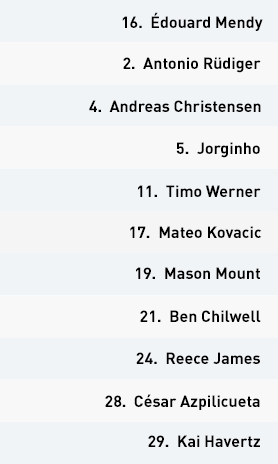 Sérgio Conceição set Porto up in a 4-3-3 formation from which they attempted to play relatively directly. Their opponents, Chelsea, defended with a 5-2-3 via their wing-backs Reece James and Ben Chilwell withdrawing back into defence.

Porto's wide forwards Corona and Luis Díaz moved infield to support Moussa Marega, when Chelsea adopted their back five, from where they matched and duelled with Chelsea's three central defenders from direct, forward passes. Their central midfielders Marko Grujic and Mateus Uribe largely remained in deep positions in central midfield; Otávio provided delayed forward runs from the inside left channel, and Luis Díaz started wider and sought to attack around James.

When Zaidu Sanusi advanced from left-back, Díaz instead moved infield. With quick combinations and one-twos, complemented by direct, penetrative, forward runs, Porto progressed possession – significantly more so than did Chelsea – but they struggled to record shots on target. One-twos through the inside channels took them beyond Jorginho and Mateo Kovacic, forcing Mason Mount into deeper territory – leaving Timo Werner and Kai Havertz to remain advanced and pose a threat on the counter – from where, as an additional defender, he contributed to reducing Porto's attacking potential.


After Chelsea took the lead, Porto continued to attempt direct attacks. Sanusi moved particularly high and wide, Díaz permanently infield, and Otávio resisted making forward runs to instead support from underneath the ball and cover against potential counters. Towards the right, Corona worked to retain their width, and was supported in doing so by Wilson Manafá, contributing to forward runs being made from central midfield into the right inside channel.

By winning free-kicks in their attacking half Porto maintained their attacking territory and had further chances to play directly into the penalty area. If they instead attempted to combine through the centre of the pitch, they were confronted by three central defenders, two central midfielders, and potentially Mount, who each worked to block shots and cover access into the penalty area.

Porto responded by encouraging both full-backs to attack and Grujic to feature as a defensive midfielder so that Otávio and Uribe could attack outside of Jorginho and Kovacic without them being short of defensive cover. Corona's width and Manafá's forward runs from right-back contributed to them accessing Marega, whose runs in behind were well timed.

That Porto also continued to play direct balls meant Chelsea defending with a low or mid-block. The visitors' 5-3-2 also often became a 5-4-1 in which substitute Olivier Giroud was alone in remaining advanced. The compact defensive block they formed ultimately proved even more difficult for Porto to progress through.

Chelsea were organised by their manager Thomas Tuchel into a 3-4-3 formation in which Jorginho and Mateo Kovacic featured in central midfield. Their opponents, Porto, defended with a 5-2-3.

Porto's shape limited Chelsea's space; their front three formed a block in front of Chelsea's two central midfielders, and a second line existed in front of their back five, forcing Chelsea to instead attempt to play over them and into their advancing wing-backs, who in turn sought to connect with Timo Werner and Mason Mount. Throughout the first half, Reece James – who was followed by Porto left-back Zaidu Sanusi – was a consistent target towards the right.

Porto's Corona tracked the runs Ben Chilwell made towards the left, freeing up their right-back Wilson Manafá to move and become compact with their two central defenders in their attempts to negate Chelsea's front three. The hosts' low and mid-blocks were difficult to penetrate, for all that they meant Chelsea having lots of possession.

It took César Azpilicueta and Antonio Rüdiger advancing from central defence to alongside Jorginho and Kovacic before Tuchel's team posed an increased threat. With James stretching Porto's shape, Mount had increased space in the inside channel in which to receive and, with Kovacic and Jorginho more ambitious in their passing through the first two lines of Porto's structure, Mount was played in to score.


On the rare occasions Porto defended from further forwards, Chelsea's expanding back three contributed to the visitors progressing beyond the pressure they were encountering. One of Jorginho and Kovacic would also move deeper to provide an option around their front three, and James and Chilwell provided passing options away from pressure. James was also capable of competing, aerially, for switches of play and to receive direct passes when Porto were defending with their mid-block, and partly because Mount's positioning helped to free him up.

When Chelsea's central midfielders beat Porto's, and found either Werner or Kai Havertz, both struggled to exert an influence in those central areas and to beat their opponents one-on-one or feed James or Chilwell. They were replaced by Christian Pulisic and Olivier Giroud.

Pulisic made an increased effort to withdraw into a deeper position and move infield – particularly when either Jorginho or Kovacic had also moved into deeper territory. Giroud, regardless, remained advanced to offer a direct option to play into; only the fact Chelsea had fewer options close to him prevented him from having a greater impact. Their lead was instead doubled when Chilwell capitalised on a poor touch from Corona to round goalkeeper Agustín Marchesín and score.