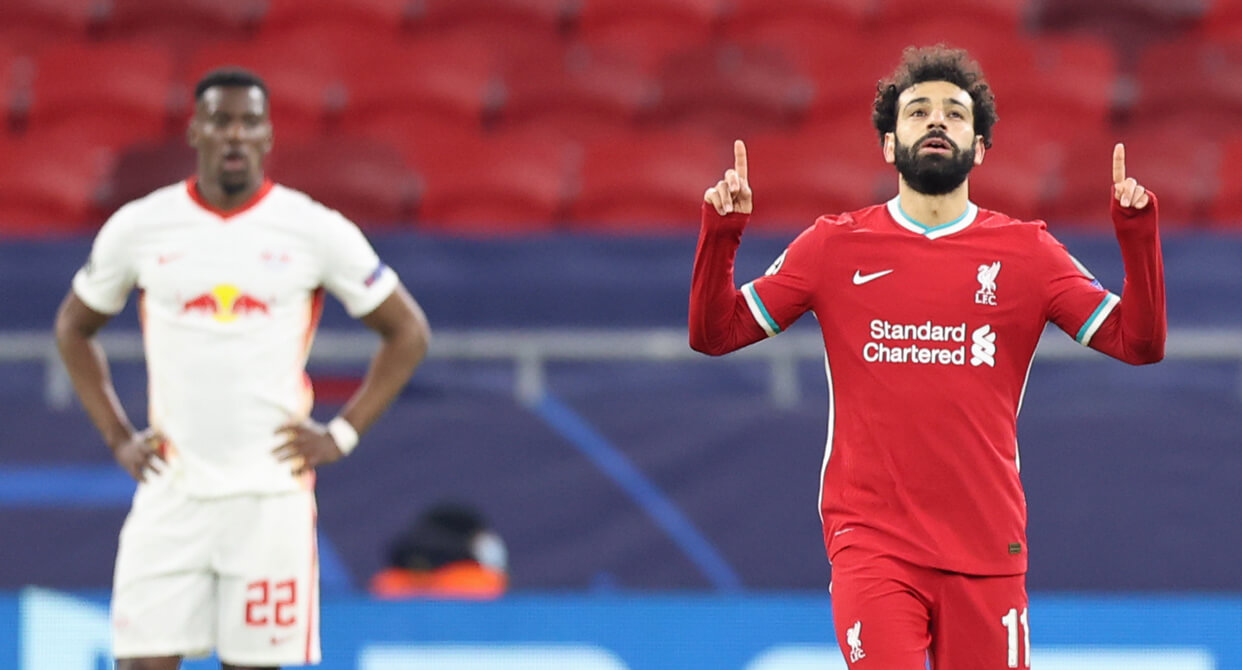 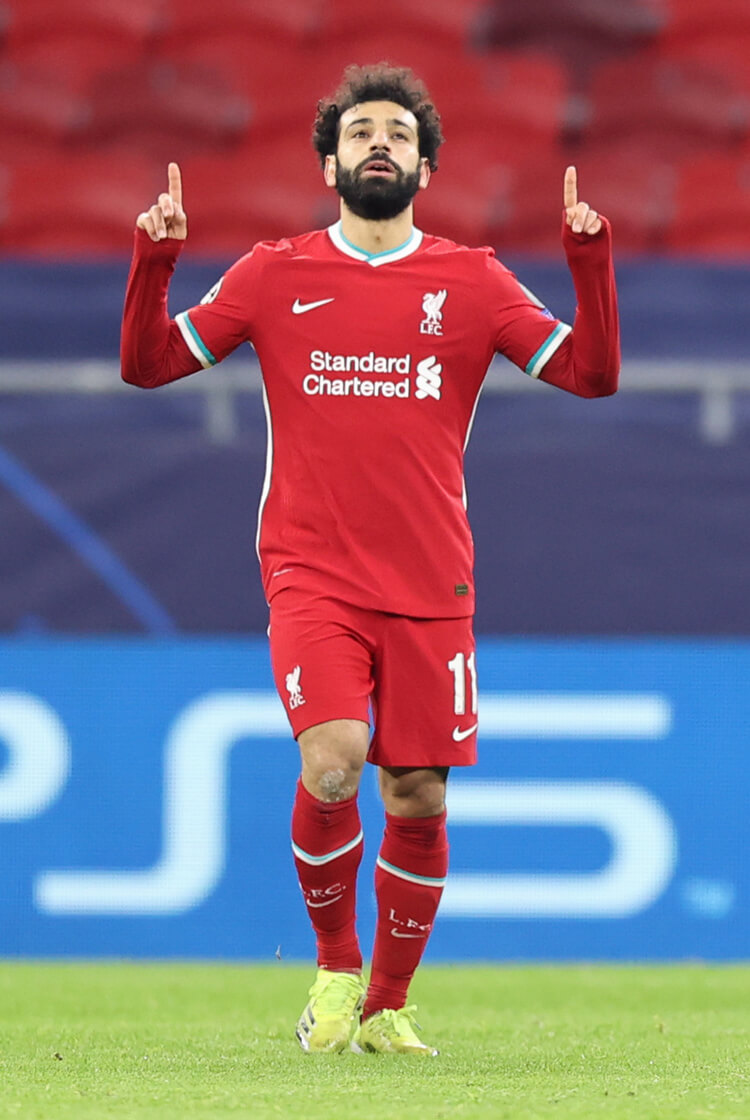 Liverpool defied their catastrophic recent Premier League form to run out comfortable 2-0 winners over RB Leipzig and ease into the quarter finals of the Champions League. As with the first leg of their last-16 tie, the fixture was played in Budapest – and, as in the first leg, second-half goals from Mo Salah and Sadio Mané proved decisive. The occasion also marked by the return of the influential Fabinho to his preferred midfield role for the first time since October. "We have to see what solutions we can find for the next games, but number six is his position," said Liverpool's manager Jürgen Klopp afterwards. "It was our hope to keep him there for the season. He is one of the best in the world in that position, that is clear - not only defending-wise but creating as well. He is so important to us." His opposite number Julian Nagelsmann was gracious in defeat, recognising: "We deserved to be knocked out". 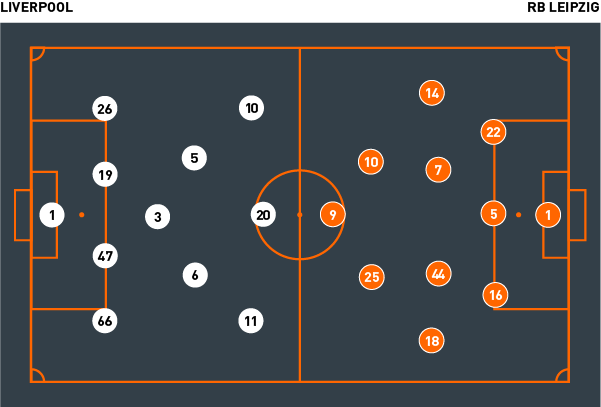 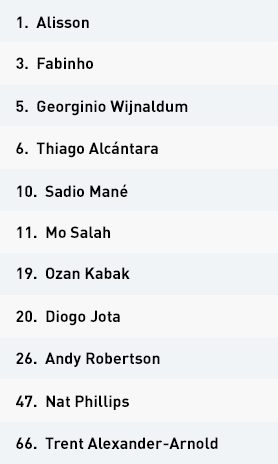 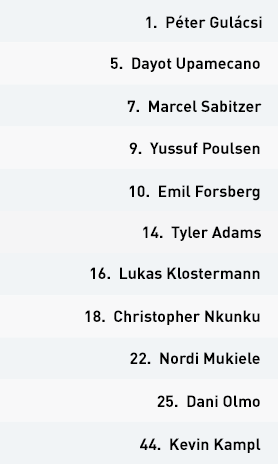 Liverpool were organised by their manager Jürgen Klopp into a 4-3-3 formation. Nat Phillips and Ozan Kabak formed yet another new central-defensive partnership, which allowed Fabinho to return to his favoured position at the base of a midfield three. Mo Salah started on the right of their front three, with Sadio Mané on the left and Diogo Jota as the central striker – although when Liverpool had the ball Jota often became a false nine, with both Salah and Mané taking up deeper positions in different situations.

Liverpool’s most effective moments in possession came from regaining the ball and attacking quickly. They were happy to spend long periods of the game in their 4-5-1 mid-block just inside their own half, and from here they used regains to attack directly. The spaces that RB Leipzig wing-backs Christopher Nkunku and Tyler Adams vacated when attacking were exploited on transition, with Salah in particular moving behind or to the side of Lukas Klostermann as his teammates regained possession.

Winning loose balls and second balls were key to Liverpool’s incisiveness on transition, and the capacity of Georginio Wijnaldum and Fabinho to be first to duels, coupled with the passing quality of Thiago, ensured Liverpool could control second and third balls to begin counter-attacks. Finding themselves three against three on the last line in these situations suited them; with one of the front three dropping centrally to help win the loose ball, the other two would make runs on the outside shoulders of outside centre-backs Nordi Mukiele and Klostermann to run on to long passes.


Liverpool were direct on transition, but they also made some nice patterns to break through Leipzig’s press. Jota played a key role in these moments, in a similar false nine position to the one Roberto Firmino has traditionally filled. The ‘hosts’ were able to find spaces in front of the three centre-backs in Leipzig’s 5-3-2 out-of-possession shape by using Jota to collect the ball deeper – though much of this success was again on attacking transition, with Liverpool breaking quickly to escape a counter-press and attack a disorganised Leipzig.

From here, one of Salah or Mané would threaten in behind, while the other would occupy the centre-backs by collecting the ball or setting from a deeper role. The differing roles taken up by Salah and Mané depended on which side the attack was started from, with the near-side wide attacker dropping to combine and the far-side attacker threatening into depth. Liverpool profited from exactly this type of move for their first goal, with Salah ultimately applying the finishing touch to both the move and, in effect, the tie.

Head coach Julian Nagelsmann set his RB Leipzig team up in a 3-4-3 shape, with Tyler Adams and Christopher Nkunku operating as wing-backs outside a central-midfield pairing of Kevin Kampl and captain Marcel Sabitzer. Emil Forsberg and Dani Olmo supported central striker Yussuf Poulsen further forward. They dropped into a 5-3-2 formation without the ball, with Forsberg joining Poulsen on the top line and Olmo dropping alongside Sabitzer, and slightly in front of Kampl, in midfield.

The German side’s 3-4-3 shape mostly featured Kampl and Sabitzer playing deeper than Forsberg and Olmo in midfield. This created either a box in the middle of the pitch, or a slightly varied 1-3 shape, with Kampl at the base. In the first line of build-up, Leipzig used goalkeeper Péter Gulásci – a former Liverpool player – to make a line of four, inviting outside centre-backs Nordi Mukiele and Lukas Klosterman to move wide in this phase. With pressure now coming from Liverpool’s wide forwards – Sadio Mané and Mo Salah – to force the ball inside, Leipzig would look to reach their wing-backs via a straight pass into midfield and then another immediately out wide. If their wing-back was occupied, they would use this to open up space in the last line.

For example, if Liverpool left-back Andy Robertson jumped on to Adams, Forsberg would move into the nearest half-space and try to draw Ozan Kabak out of the defensive line to open deep runs for Poulsen or long switches to Nkunku. Wijnaldum would sometimes jump out to Adams to allow Robertson to stay in the defensive line, in which case Leipzig would have two spare players in the middle and could find runs in behind. Where Forsberg or Poulsen were able to win the first ball to set back, there was too often a lack of threat in behind – Leipzig thus struggled to penetrate from these moments.


The two key ways in which Leipzig tried to build their attacks was through those four central players, and through Nkunku isolating Liverpool right-back Trent Alexander-Arnold. Sabitzer and Kampl’s narrow positioning made Liverpool’s midfield three defend in a flat line, but the Leipzig centre-backs were still unable to make direct passes into the feet of Olmo and Forsberg in between the lines. This was due not only to the compactness of Liverpool’s midfield, but also Salah and Mané defending inside the half-spaces, with inside-facing body shapes to block forward passes. Wijnaldum, Fabinho and Thiago blocked passes into the pockets, and were aggressive to drop back on to passes that broke through to support their young centre-backs in resulting duels.

Leipzig also struggled in the final phase. Nkunku was used as a one-on-one outlet against Alexander-Arnold, and although they would look for long switches behind the Liverpool right-back, Nkunku failed to capitalise on these situations. The times when Dani Olmo made deep runs from inside Alexander-Arnold were more effective, but this was a rarity and could have been exploited more. When Nagelsmann’s team did manage to find any space in and around Liverpool’s eventual low block, their finishing lacked quality.

With the game still goalless at the break, Leipzig made a change, with former Crystal Palace forward Alexander Sorloth replacing Kampl in an attempt to allow Poulsen to spend more time in between the lines. This 1-3 shape in midfield, with Sabitzer now acting as the deepest-lying midfielder, was actually less effective than the 2-2 box because it allowed Liverpool to stagger their midfield line and cover more space. Nagelsmann changed the profile of his team again when introducing Justin Kluivert and Hwang Hee-chan on the hour. This much-needed injection of dynamism and pace created one or two openings when isolating Liverpool’s full-backs, but Leipzig failed to create any sustained attacks and ended the game and the tie well beaten.