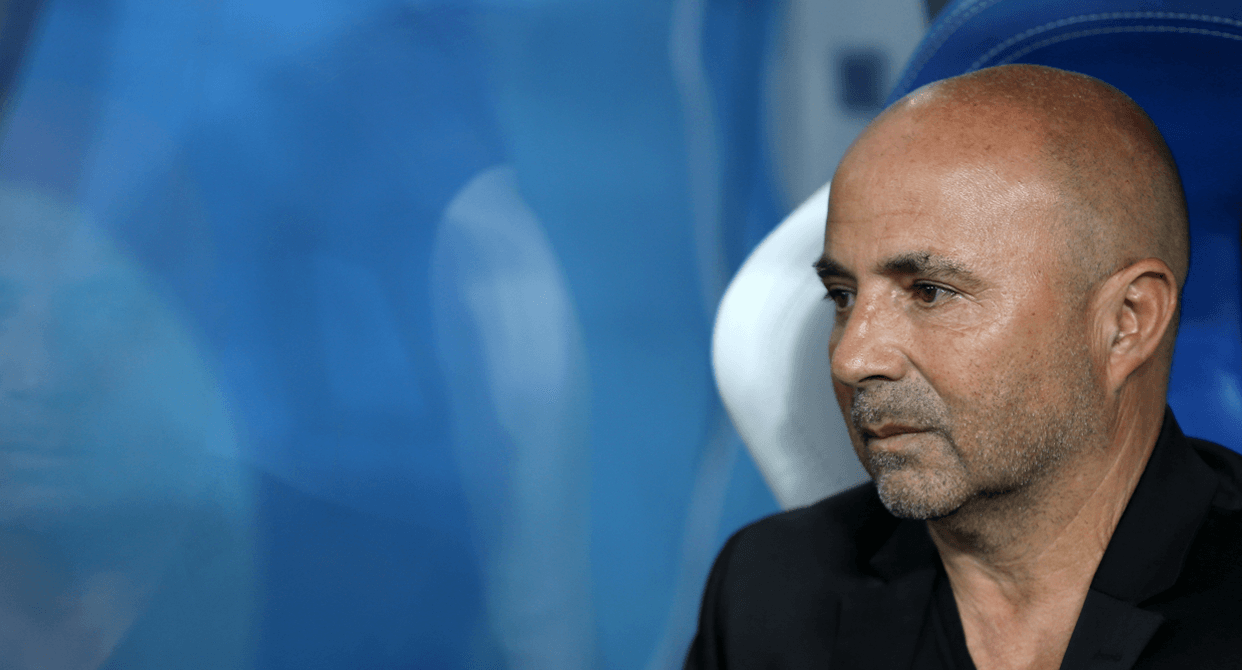 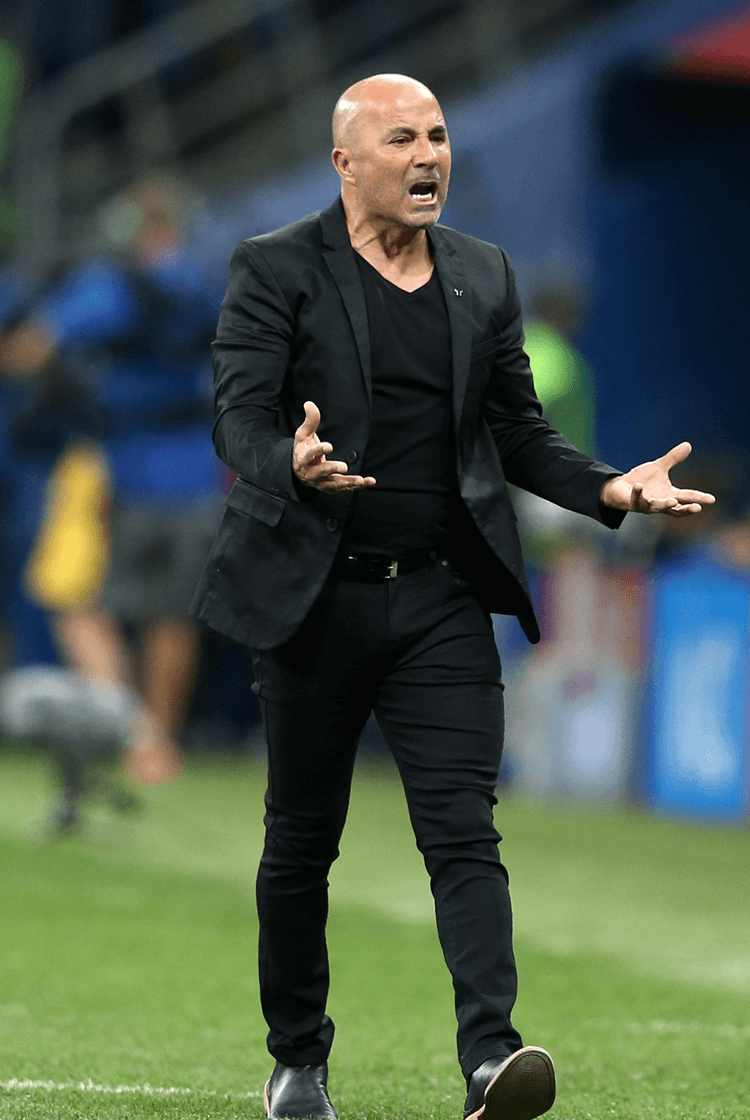 Profile
The respected Jorge Sampaoli was 60 when he secured a return to European football at Olympique de Marseille, as the successor to André Villas-Boas, in March 2021. A respected figure who earned admirers for the impressive team he built with Chile before succeeding Unai Emery at Sevilla and then managing Argentina, his national team, he is another disciple of the revered Marcelo Bielsa, who himself built the most exciting of teams at Marseille during 2014/15.

"One of a coach’s best virtues is flexibility, not falling in love with their own ideas,” said Bielsa, an admirer of his compatriot. “I don’t relent with my ideas and that’s not a virtue – it’s a flaw. Sampaoli does compromise because he has the power to adapt, unlike me. That definitely makes him better than me.”

Playing style
Sampaoli is a particularly attack-minded coach whose teams have competed with a variety of structures. Those teams seek to regularly attack, and to defend from as high up the pitch as possible. They also offer a significant number of rotations and movements, and attempt to play for as long as possible in the attacking half.

In Sampaoli's approach there exists both a willingness to adapt and a long-term preference, where possible, to organise teams into a 4-3-3. That recognition of the need to adapt has also contributed to the use of a back three, such as that in the 3-5-2 Chile used at the 2014 World Cup, when he had identified the benefits involved in increasing their numbers in midfield for both their attempts to build attacks and to contribute during defensive transitions. When managing Argentina, he most commonly implemented a 4-2-3-1 in which the three behind his striker remained in narrow positions to prioritise attacking through the three central lanes; similar principles applied with their 3-4-2-1.

His return to club football, in Brazil – with Santos and Atlético Mineiro – also involved a return to his 4-3-3, but that same flexibility again meant that while his playing principles were maintained, Santos also experimented with a 4-2-3-1, 3-4-3 and 3-5-2, and Atlético Mineiro, particularly when an overload was targeted in midfield, the same 3-4-3. Such principles are led by a possession-based approach that means that Sampaoli's teams are built to dominate the ball and feature players who commit to advanced positions and, by extension, consistently encourage the ball to be played forwards.

If they are confronted with a high press, his midfielders often operate on different lines to create further passing lanes and ensure that the first line of that press can be played through. His goalkeeper, when needed, similarly contributes to create overloads in the same way that a defensive midfielder will withdraw into a deeper position to do the same, often creating, with that goalkeeper and two central defenders, a diamond structure. With their full-backs therefore wide, there remains the potential to build around opponents, even if the preference is to play penetrative passes through the more central areas of the pitch.

At Santos, their goalkeeper Everson Felipe represented the base of that diamond, and contributed with an admirable variety of passing into either the two central defenders or the defensive midfielder – forming the diamond's peak – in front of him (above). The positioning of that defensive midfielder meant he became the key link to their attacking midfielders, who often remained advanced, increasing his time and space, and potentially ensuring he would have one fewer marker. A similar distance also exists between those in Bielsa's midfields.

If opponents are instead organised to defend with a mid-block, Sampaoli's teams seek to increase the spaces between the lines. Chile did so particularly impressively from a 3-4-3 (below) in which Gary Medel, Marcelo Díaz and Francisco Silva formed their back three, giving those in midfield increased freedom to stretch play by regularly making runs in behind. Against reduced pressure, possession was circulated across defence at speed to draw opponents to one side of the pitch and therefore create the potential for play to be switched. Charles Aránguiz and Arturo Vidal provided forward runs from central midfield, between Mauricio Isla and Jean Beausejour, who did the same from wide areas to support Chile's front three. With Aránguiz operating similarly to a pivot and providing the link from those in defence, and then Vidal moving to take a more advanced position, further threats were offered behind their opposing midfield.

Argentina regularly encountered low defensive blocks, increasing the emphasis on them to generate overloads – particularly between the lines. To that end, their central defenders advanced into midfield to draw their opposing midfielders out of position and therefore create suitable spaces to play through to the talented, creative players in front of them, and also to give their deepest-lying midfielder time and space to play through. Those low blocks regardless reduced the attacking spaces that existed, and therefore reduced their opportunities to make runs in behind, so Sampaoli instead instructed his players to provide more, short passing options within that block to the extent that the in-possession player had numerous teammates supporting him through the three central lanes.

Their attacking midfielders regularly rotated without sacrificing the potential to connect to each other via quick passing combinations and they were supported by those remaining wide, who in turn delivered crosses into the penalty area after switches of play. Atlético Mineiro offered similar attacking structures against lower blocks but an increased focus on wider combinations – creating more chances from around the outside of their opponents' block (below) – and their wide midfielders and full-backs provided both a creative and goalscoring threat. Their central midfielders' movements and positioning focused on supporting the ball carrier, and they made more adventurous forwards runs than did Argentina's, with the intention of attacking crosses, cut-backs, and through balls delivered from the wider areas of the pitch – at least one of those central midfielders would also look to penetrate into the area. Variety was present in his teams' structures and in the focus of their attacks, but it was a variety underpinned by Sampaoli's preference for attacking football built on effective off-the-ball positioning and numbers in the final third.

Defending and pressing
Sampaoli's preference for a possession-based brand of football means that his defensive strategies are focused on an aggressive press and making early regains. His teams regularly press in advanced territory and, by extension, reluctantly concede ground. Where during periods without the ball another coach may focus on not conceding, Sampaoli's priority is on recovering the ball as quickly as possible in the pursuit of launching another attack, even if the reality of them not always being able to press also meant occasional uses of a mid-block.

The Argentinian's teams mostly press outwards in an attempt to lock the ball to one side of the pitch, towards where those positioned in its centre will aggressively move across to support that press – often, therefore, negating switches of play. Sevilla were particularly effective at doing so (below) via the 3-4-3 that regularly took them into such advanced territory. Wissam Ben Yedder regularly instigated the first line of Sevilla's press, towards the direction of the first pass, and from that pressing trigger, adjustable movements were made from the second line, where perhaps Franco Vázquez and Samir Nasri reduced the spaces available for central passes through their defensive block. With the ball forced wide, Pablo Sarabia and Vitolo most commonly moved wide, and on occasion were supported in doing so by the full-backs behind them.

Chile’s 3-4-3 pressing structure was coordinated similarly. The first line of that structure aggressively pressured the first passes, and the second covered the spaces that existed in the centre, where the versatility of Aránguiz and Vidal, as capable of advancing to press as they were competing for direct balls attempted over the first line of their press, was as essential as the cover provided by Isla and Beausejour outside of them.

Santos were more regularly organised to defend with a mid-block that focused on reducing the distances that existed between their defence and midfield, often by adopting a 4-1-4-1 in which Alison operated between defence and midfield to reduce the spaces – the same ones Sampaoli's teams often attack into – that otherwise would have existed between the lines. His efforts were supported in the centre of the pitch from midfield by Diego Cristiano and Carlos Sánchez, and there existed the freedom for individuals to abandon the line on which they were defending to make a regain, in the knowledge that Alison would deputise for them and that Marinho and Yeferson Soteldo moved infield from their wide starting positions.

Atlético Mineiro’s most commonly used defensive approach prioritised defending from higher territory and making quick regains after losses of possession. The second line of their structure proved particularly effective – their defensive midfielders Allan and Jair were influential in defending against direct play and in contributing to a high press behind their striker. When possession was contained to one side of the pitch, those pressing from that second line aggressively hunted the ball and covered both behind the wide midfielders and full-backs alongside them.

Their full-backs often started in line with or even ahead of their defensive midfielders, ensuring that improved cover was in place behind the first line of their press, contributing to how effective its second line consistently was. They were covered from behind by those defensive midfielders – ensuring the preservation of their desired compactness in central defence – and adopted positions that enhanced their attacking transitions, when higher regains gave them the potential to counter through the wide areas of the pitch.