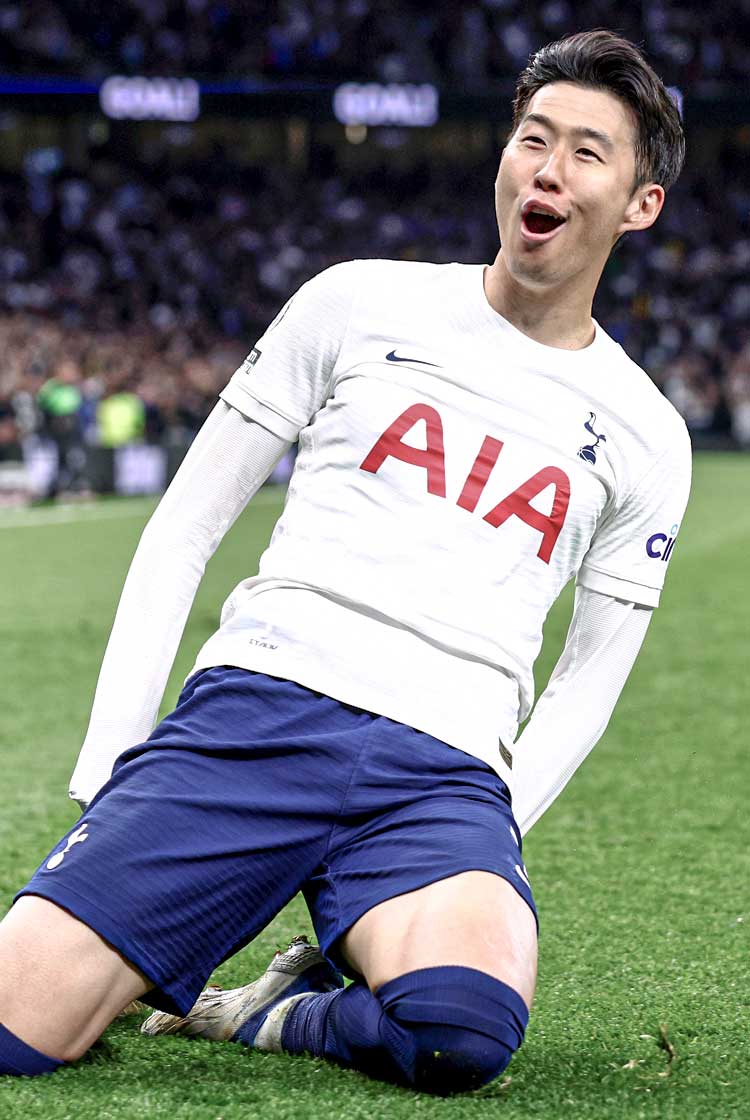 Tottenham kept the race for Champions League qualification alive with a one-sided victory over rivals Arsenal in the north London derby. A win for Mikel Arteta's side would have secured fourth spot, but a Harry Kane double, a first-half red card for Rob Holding and a Son Heung-min strike shortly after the break put paid to any hope of an Arsenal result. The win extends Tottenham's impressive home record against their rivals and reduced the gap between the teams to one point, but Arsenal's destiny remains in their hands. If they win both of their remaining games – away to Newcastle and at home to Everton on the final day of the season – then they will finish fourth regardless of how Tottenham do in their remaining games against Burnley and Norwich. Tottenham manager Antonio Conte insists his side are still in with a good chance of overtaking Arsenal, though.

"We have two games to go. Everything is open," said Conte. "The confidence has to come from the work we are doing every day. For sure to win an important game against Arsenal, the importance of the game to our fans, has to give us confidence."

Tottenham were set up in their usual 3-4-3 attacking shape, and came up against Arsenal in a 4-4-2 defensive structure. With two in the visitors’ first line, Tottenham’s two widest centre-backs were able to step out with the ball, but were often unable to access the double pivot directly due to Arsenal’s shape. Harry Kane often moved out towards the right, while Son Heung-min stayed on the left. This created a significant gap between Arsenal’s centre-backs (below), with Son causing Rob Holding early problems that led to the defender’s dismissal.

Until Holding’s red card, Arsenal pressed Tottenham high up the pitch. Grant Xhaka jumped out of midfield to press Davinson Sánchez (below), with Eddie Nketiah and Bukayo Saka covering the hosts' other two centre-backs. Tottenham’s wing-backs and wide forwards were marked by their direct opponents when the ball was on their side of the pitch, while the position of Arsenal’s far-side winger dictated whether Tottenham could break the press or not. With Xhaka jumping out, one of Pierre-Emile Højbjerg or Rodrigo Bentancur was often left free, especially if Kane dropped to occupy Mohamed Elneny. That meant that if Arsenal’s far-side winger came narrow, Tottenham struggled to find a way through Arsenal’s press.

Once they went down to 10 men, Arsenal formed a 5-3-1 low block. Tottenham’s main aim in possession was to stretch the visitors’ second line, with lots of patient switches of play. Whenever a central gap appeared following a switch, Tottenham’s centre-backs looked to fizz a ball into Kane, who could then link with Son or Dejan Kulusevski, who attacked in much narrower positions than they did in the first half, as was the case for Tottenham’s third goal (below). The overlapping wing-backs also pushed higher and wide to further stretch Arsenal.

With Arsenal’s second line intent on covering the central areas, Tottenham switched their focus to the inside channels. Emerson and Kulusevski remained as an attacking pair on the right, and were often man-marked by Xhaka, Martinelli or Saka, but it was Tottenham’s left side that posed a greater threat. Kane regularly moved across, with Takehiro Tomiyasu moving out to press him; this freed up Son, while Sessegnon held the width (below). Further support came from Ben Davies pushing forward or Højbjerg moving across, as the hosts overloaded the left inside channel effectively.

Arsenal attacked in a 4-2-3-1 shape, up against Tottenham’s 5-4-1 mid-block. The visitors pushed both full-backs forward, with Bukayo Saka moving inside from the right, and Gabriel Martinelli holding the width on the left (below). Martin Ødegaard drifted across from his number 10 position into the space between the lines, often moving into the right inside channel to rotate with Saka. Takehiro Tomiyasu then provided something similar on Arsenal’s left.

The hosts’ 5-4-1 mid-block was extremely compact and organised, and proved difficult to break through. Whenever Granit Xhaka moved out of the double pivot and repositioned himself between the lines, Arsenal had three central players offering passing lines through the gaps in Tottenham’s second line (below). Wingers Saka and Martinelli then both held their width, while the full-backs offered a route to the wingers to try and get around the Tottenham block.

Arsenal looked most threatening down their left side, where they rotated well. Xhaka dropped out to allow Tomiyasu to move forward much earlier, which created overloads around Tottenham’s right wing-back Emerson Royal (below). Eddie Nketiah then dropped into the left inside channel to provide a link between the lines. Mohamed Elneny became a temporary single pivot, with Ødegaard in the right inside channel in case of an opportunity to switch the play. Despite threatening down this side, Arsenal shot themselves in the foot when they conceded a penalty and had Holding sent off.

In the second half and a man down, Arsenal understandably struggled to create much of note against an extremely compact Conte block. Ødegaard and Saka acted as number eights alongside Elneny, with the width provided by Martinelli on the left and Cédric Soares on the right (below). However, both were also needed back to form a defensive line of five when Arsenal didn’t have the ball, so they had significant ground to cover whenever Arsenal regained possession. Nketiah was extremely isolated against the hosts’ three centre-backs, so Arsenal naturally could offer little once they reached the final third.