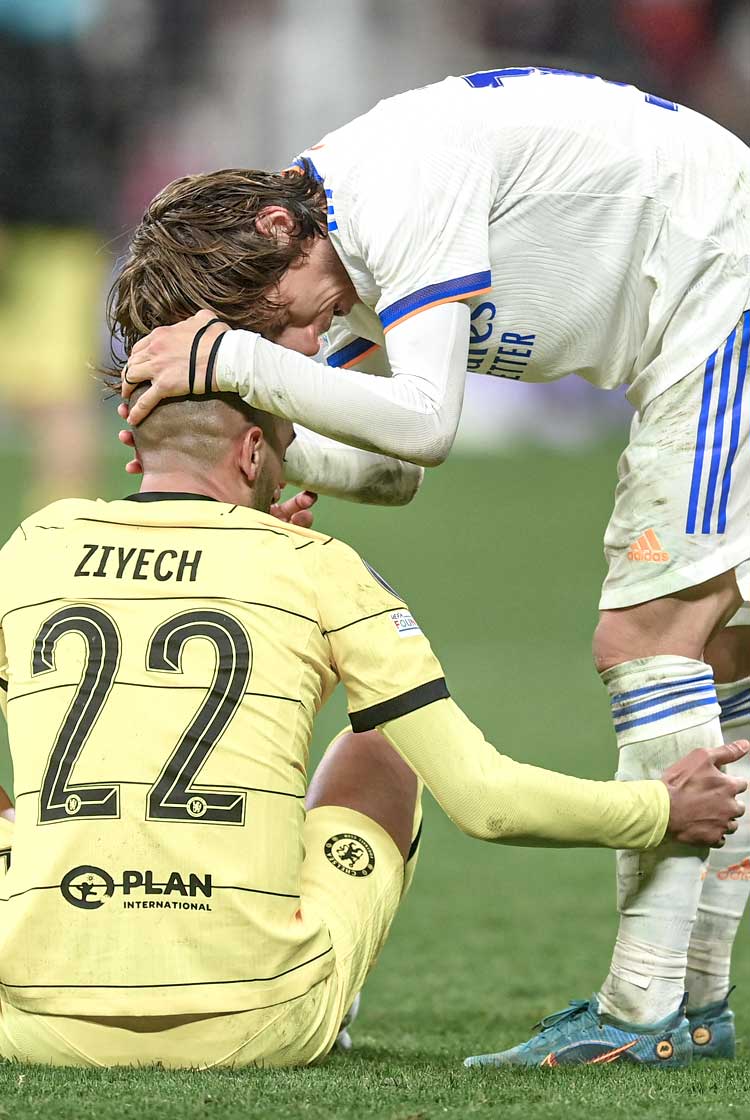 Real Madrid survived a huge scare in this Champions League quarter final second leg after Chelsea so nearly produced one of the greatest comebacks the competition has ever seen. Having watch his team outplayed in a 3-1 defeat on home soil a week earlier, Thomas Tuchel set Chelsea up to play on the front foot with the aim of scoring the three goals they needed to overturn the first-leg deficit. Mason Mount set them on their way with a well-taken opener inside 15 minutes, before Antonio Rüdiger levelled the tie at 3-3. Chelsea then looked to have stolen it when Timo Werner struck 15 minutes from time, only for Luka Modric to produce one of the passes of the season to set up Rodrygo, who sent the tie to extra-time. Then, six minutes into extra-time, Karim Benzema, Chelsea's tormentor at Stamford Bridge in the first leg, headed home to break Chelsea hearts and send Real through.

Tuchel was pleased with his team's performance, but rued a couple of mistakes. “We played a fantastic match," he said. "We deserved what we had, we scored four goals and we had big chances to score even more. Unfortunately, we had two mistakes in crucial moments and against Real Madrid [you are punished]. We deserved to go through, but it was not meant to be.”

Focus down the left

Real Madrid used a 4-3-3 attacking shape against Chelsea’s out-of-possession 4-4-2 diamond. Both when Chelsea pressed high and when they dropped into a block, Real found space down their left side, with Toni Kroos dropping, and left-back Ferland Mendy pushing forward to support Vinícius Júnior (below). On the right, Federico Valverde moved into central midfield to ensure Real always had three players in there; Dani Carvajal remained withdrawn at right-back.

In the first leg, Madrid’s central-midfield rotations proved key, with Chelsea struggling to contain their opponents' play in central areas. In response, Tuchel used an aggressive press from a 4-4-2 diamond in this game, with Kai Havertz and Timo Werner jumping on to Real’s centre-backs (below), and Ruben Loftus-Cheek operating on the right side of the out-of-possession diamond. Marcos Alonso pushed forward from left-back to deal with Dani Carvajal, while Loftus-Cheek kept tabs on Mendy. Luka Modric, Casemiro and Kroos were then covered man-for-man by the three other members of Chelsea’s diamond, enabling the visitors to deal with Real’s midfield rotations far, far better than they did at Stamford Bridge.

Once Chelsea had levelled the tie at 3-3, they formed a more permanent back five when out of possession, with Loftus-Cheek dropping back on the outside of Reece James. This meant Real’s left-sided attacking patterns became less effective, so Vinícius moved closer to Karim Benzema, almost as a second centre-forward. Both Real full-backs then pushed higher, with Valverde’s narrow movements ensuring Kroos could still take up positions in the left inside channel (below). Modric was also give more licence to operate between the lines. His influence on the game grew as a result, because Chelsea had one fewer player in central midfield.

Madrid used a more fixed front three for the remainder of the match, with Rodrygo and Vinícius both staying high (below). Support was mostly provided by the two full-backs, with the central-midfield three holding their positions and remaining compact. Although this limited Chelsea’s counter-attacking threat through the centre of the pitch, it also meant Modric was deeper and couldn’t influence the game like he had been doing. However, this attacking structure did allow Benzema to consistently drop short for the first time in the match, while the wingers stayed high and wide.

Higher threat on both flanks

Chelsea showed a lack of composure on the ball in extra-time. Real were able to capitalise, as their wingers could receive in space after Chelsea’s wing-backs had pushed forward (below). With one winger on each side, Madrid had options to attack down either flank after a central-midfield regain, where previously Valverde had come inside from the right. Nonetheless, it was the left side that produced the match-winning moment in extra-time, as Vinícius’ deft cross found Benzema to head home.

Starting on the front foot

Chelsea initially used a 3-5-2 against Real Madrid’s 4-1-4-1 defensive block. However, right wing-back Ruben Loftus-Cheek operated in the right inside channel, meaning Chelsea did not have much width on that side. Right centre-back Reece James was cautious with his positioning early on, but did sometimes overlap around Loftus-Cheek instead of worrying about Vinícius’ counter-attacking threat. Number 10 Mason Mount drifted into the left inside channel, while Marcos Alonso held the team’s width on that side (below).

Once James began to push forward, Chelsea started to dominate in midfield. The height and width of James and Alonso pinned Madrid’s wingers back deeper – often even deeper than Kroos and Modric in central midfield (below). With Loftus-Cheek still in the right inside channel, the hosts’ single pivot, Casemiro, was often overloaded by Chelsea’s two 10s. Timo Werner and Kai Havertz each positioned themselves between a Real centre-back and full-back, which prevented the Real defenders from stepping up to support Casemiro. Further rotations between James, Loftus-Cheek and Havertz helped Chelsea progress down the right.

Chelsea changed to a more conventional 3-4-3 attacking shape in the second half, with Loftus-Cheek providing the width on the right. Mount and Havertz played as number 10s between the lines, receiving on the shoulders of Real’s two number eights (below). Chelsea also used more direct attacking play in the second half, with Werner threatening the space in behind the Real defence. This helped create more space between the lines for Chelsea to find their two number 10s. However, whenever Werner held his position, one of Madrid’s centre-backs could step forward and press Havertz or Mount when they looked to receive.

Left-sided rotations between centre-forward Werner, number 10 Mount and wing-back Alonso helped disrupt Real’s centre-backs, especially when one of them jumped to press in midfield. When Real’s back line became too narrow, Chelsea played around the outside via Mount, who had rotated out there, or through Alonso whenever he held his width. The Spaniard scored a disallowed goal after overlapping around the outside, and Werner’s goal also stemmed from a progression down the left.

Once the home side took an aggregate lead, they dropped into a similar low block to that which they used to such great effect in the first leg, with the right winger dropping back to form a back five (below). This allowed left-back Marcelo to start wider and deal with Loftus-Cheek earlier. Modric covered the space between the lines, and Real’s midfield unit narrowed to block access into Chelsea’s two number 10s and centre-forward. Chelsea struggled to create anything through Real’s low block; their build-up around the outside was also well defended by the hosts, who saw out a narrow and nervy win.