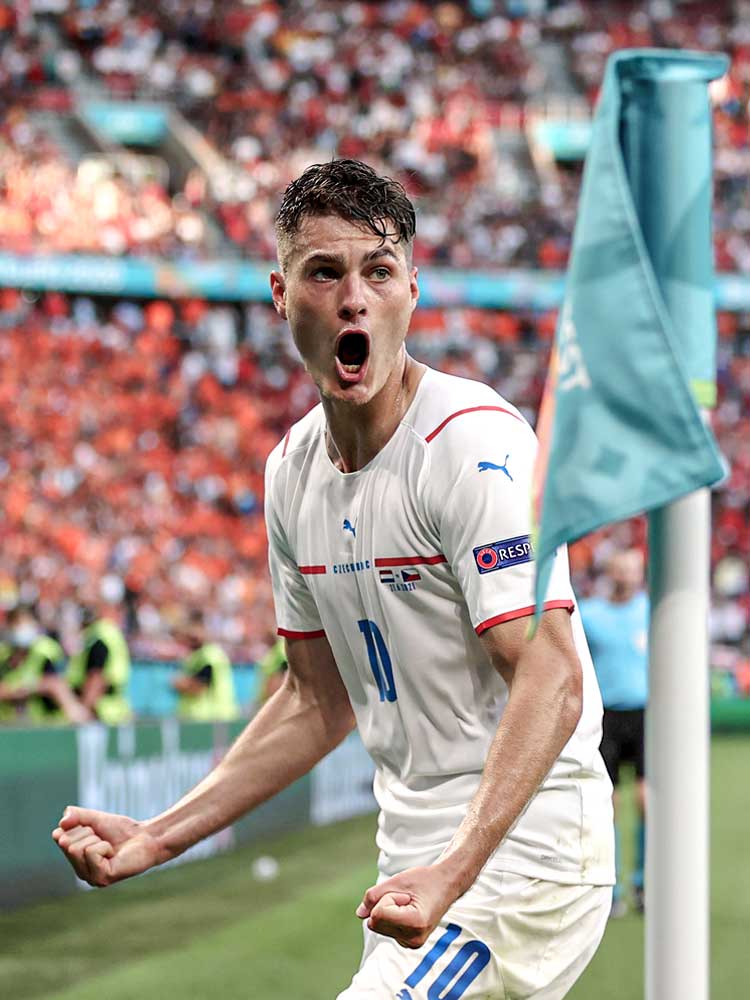 Czech Republic advanced into the quarter finals of Euro 2020 when they capitalised on Matthijs de Ligt's red card to punish the Netherlands. Within a single second-half minute, Donyell Malen wasted Netherlands' best chance to take the lead and De Ligt was sent off for a handball when the last man. Against 10 men, the supposed underdogs took control and secured their passage into the last eight with goals from Tomás Holes and Patrik Schick – the latter moved to four goals in the tournament, just one behind the now-eliminated Cristiano Ronaldo. Netherlands manager Frank de Boer said: "We were in control. In such a match, it is only about one or two moments. Malen got it. Shortly after that, you are with 10 men. Then it becomes difficult. You hope that they become frustrated and take risks so that you get more opportunities yourself." His opposite number, Jaroslav Silhavy, said: "It was a great performance. The mood in the dressing room is great. I'm delighted, and not just that we overcame a very strong opponent – we managed all aspects of the game."

Netherlands were organised by their manager Frank de Boer into a 3-4-1-2 formation in which Georginio Wijnaldum featured behind the front two of Donyell Malen and Memphis Depay. Their opponents, Czech Republic, defended with a 4-2-3-1.

Malen and Depay worked to combine on the same side of the pitch, and to make runs between full-back and central defender, creating space for Wijnaldum to advance and for the far-side wing-back to attack the back post when crosses were delivered from the other wing-back. If De Boer's team were instead building more patiently, Czech Republic's front three pressed their three central defenders, their full-backs advanced to take their opposing wing-backs, and their two defensive midfielders took their opposite numbers, increasing the room Wijnaldum, Depay and Malen had to move into to receive direct passes – potentially in behind.

It was when they were confronted with a much lower defensive block that they struggled to find those same players, forcing Depay and Malen to withdraw into deeper territory to receive. Their opposing central defenders following them briefly opened spaces through which to penetrate, but Tomás Soucek and Tomás Holes often recognised that and covered.

Czech Republic continued to defend with numbers, particularly amid Denzel Dumfries and Patrick van Aanholt often overlapping to cross, ensuring that too little an attacking threat existed through the centre of the pitch, not least given Depay and Malen were required to move wide to contribute to the creation of space from which to cross. They sought to adapt via Dumfries advancing at an early stage, often close to as far as their most advanced player, and via Depay drifting further across the width of the pitch, often depending on where Wijnaldum was positioned.

With Malen therefore their most advanced threat, their finest goalscoring chance came to him when Depay withdrew and flicked possession into his path; Malen succeeded in creating a one-on-one, but then couldn't round goalkeeper Tomas Vaclik. When, shortly afterwards, Matthijs de Ligt was sent off, the game was transformed.

They were forced to build with a back three in which Van Aanholt became the third central defender and, with Wijnaldum withdrawing to form a midfield three, Depay became isolated. Wout Weghorst was later introduced to support him in the final third and become the target of direct play over their opponents' midfield, but they lacked the numbers to support around him even when he won the ball.

Jaroslav Silhavy set Czech Republic up into a 4-2-3-1 formation in which Tomás Soucek and Tomás Holes formed their double pivot. Netherlands mostly defended with a 5-3-2.

Soucek regularly advanced – leaving Holes as their solitary defensive midfielder – to make forward runs around the movements of Antonín Barák. If they were instead building possession from deeper territory, Soucek remained withdrawn to provide a passing option and to negate the efforts of Memphis Depay and Donyell Malen to restrict access into Holes.

Netherlands initially dominated possession, forcing Czech Republic to concentrate on countering; they targeted the runs Patrik Schick made into wider territory to draw Matthijs de Ligt, and supported Schick via the relevant wide forward and Barák helping to secure possession and then cross the ball into the penalty area. When they instead built from deeper territory, Depay and Malen took their opposing central defenders, Georginio Wijnaldum aggressively marked Holes, and Soucek and Barák were taken by Marten de Roon and Frenkie de Jong, encouraging them to instead build more directly into the wide areas of the pitch, between wing-back and central defender. Their full-backs withdrew to provide a short passing option, in turn encouraging Denzel Dumfries and Patrick van Aanholt to advance, and to create increased space to play longer passes into.

Vladimir Coufal's desire to advance from right-back and deliver crosses contributed to those direct passes more commonly being played towards the right, but with Netherlands responding to defend with a mid-block, their attempted direct passes often came to little. Silhavy's team therefore built into their full-backs, who in turn sought to combine with the wide forward in front of them, and Soucek or Barák. Though their emphasis remained on attacking crosses, Netherlands' back five convincingly defended against them; Czech Republic only occasionally tested Maarten Stekelenburg from counters or corners.

After De Ligt was sent off amid his attempts to challenge Schick as the striker pursued a simple ball in behind, Czech Republic established an increased grasp of possession. Their opponents sought to defend with a 4-4-1 mid-block, so Coufal and Pavel Kaderábek advanced to received on the shoulder of their opposing wide midfielder. Against a lone striker, they also used only two central defenders and a defensive midfielder to build, in turn encouraging both wide forwards and Soucek to advance to between the lines.

Regardless of that increased presence in the centre of the pitch, it remained building with width that proved most effective, and which was complemented via the far-side full-back advancing to attack crosses at the back post. Czech Republic took the lead at the second phase of a set-piece, when Holes headed in, contributing to Netherlands reorganising into a 4-3-2 and Czech Republic having greater freedom in midfield, in turn leading to them securing the loose ball from which their second goal was scored.