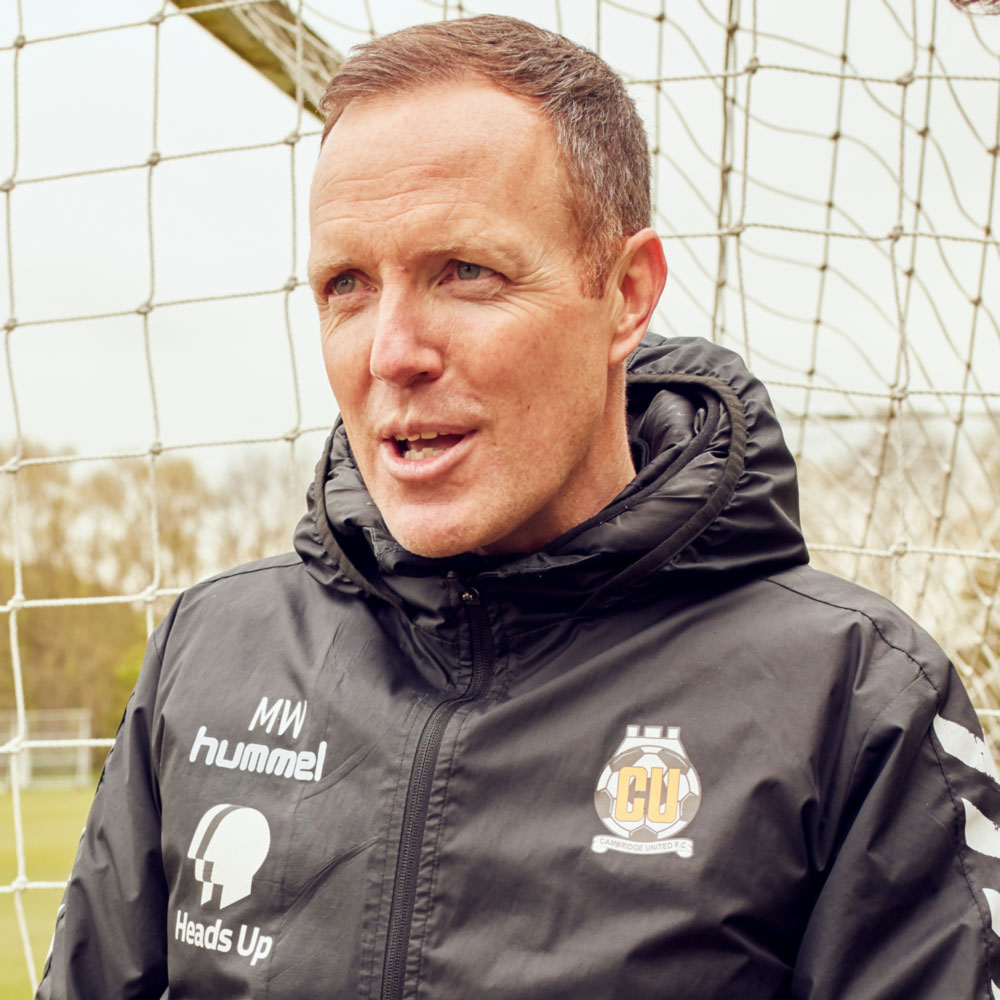 Building something from nothing

“We’ve got no money, so let’s have the best ideas.”

When I first joined Cambridge United in 2008, it was to run the Centre of Excellence Programme for nine to 16-year-olds. I was leaving a stable job in teaching and taking a big pay cut to run a scheme that had zero funding.

I was working alongside Tom Pell, who is now the Academy Manager at the club, and Jez George, who eventually became manager and is now Head of Football at Lincoln City. We would always be thinking: “What ridiculous thing can we do this year to keep these kids in our academy?”

It is easy to look back on those days through rose-tinted glasses, but it was hard. Really, really hard. One year, Jez and I walked from Torquay to Cambridge, to try and raise £100,000 so we could keep the whole thing afloat.

We all talk about caring deeply for the club, but we also cared deeply for the kids in the system. You could see their journey – the investment of time they had made themselves, the time their parents had put in, and all with no guarantee that the final destination would be worth it.

But that’s where the magic happens, when you can build something from nothing. In those early days, we told all the boys we coached that this could be worth hanging on for. Now, we have seen young players getting in and around the first team – Lewis Simper was in that scheme at six years old, and Ben Worman at seven. We look back and feel justified.

Now, the Academy in its present format looks nothing like it did in 2008 – it is far, far better, with many more specialists – but the roots and essence of what we built back then remain. Tom has been here throughout, I went away to Watford and then came back, and Mark Bonner (below) – who is now the first-team manager – has been here for a long time too.

"We'd love to train in a football disneyland, but not everything has to be in place for a team to succeed"

Then you try and recruit people who have some of the same values. That doesn’t mean they have to be the same as you; just that you see something in their character that gives you confidence they can pick things up and take them forward. We’ve lost some great staff – medical staff, physios, sport scientists – who have gone on to bigger clubs, but they all cared passionately about Cambridge while they were here and left it in a better state than when they arrived.

There are bits of the job that they still miss because, well, I don’t think you can go into many clubs where the first-team manager knows some of the Under-14s by name. It’s an odd dynamic in some ways, but it’s also a pretty special dynamic.

I think that same dynamic helped during the lockdown. We saw it as an exciting challenge, a brilliant opportunity to be innovative and motivate or challenge our players in a different way.

One of our lads, Kyle Knoyle, had a shoulder injury. He had his surgery, and then obviously we couldn’t treat him or see him as normal. So I put a WattBike in my car, which didn’t really fit, and drove it round to his house – only then did I discover he lived in a flat on the third floor with no lift. He was probably stronger than me with only one good arm, but I didn’t really want to get him any more injured than he already was. There I was, then, trying to push this WattBike up three flights of stairs so he could work out at home.

You look back on those moments and smile, but it’s just what you need to do, isn’t it? I think that’s why we’ve overachieved, really. We’ve had that mentality of achieving despite everything, and not looking for hard-luck stories. If you can just push the boundaries a little bit, and then recruit players and staff with the same mindset, then you can do that.

We’d love to train in a football Disneyland, don’t get me wrong, but not everything has to be in place for a team to succeed. We’ve done deadlifts in a wedding marquee surrounded by puddles and ducks. We’ve got changed next to burger vans and in car parks, and had to walk half the length of a stadium in a towel to get a shower. That was the story of last season, and we can dress it up however we like – but it was the same for everyone, and we never got too precious or thought we were too good for this. The better we could embrace it, the better we thought the season was going to go. We weren’t expected to win, but we still got promoted.

"if you're willing to be the guinea pig, you can get in before there's a huge cost attached"

In my role as Head of Performance, I try to make sure we’ve got some consistency from our youngest age groups all the way through to the first team. I’m mainly looking after three areas: sports science, and all the things that come with that – such as strength, conditioning and nutrition – medical provision and analysis. And we’ve sort of built those things from scratch.

When I started, Greg Reid was the physio who had been at the club a number of years; he pretty much looked after the Under-18s and the first team on his own, and did an incredible job. Scott Taylor worked with the first team as a fitness coach, and then there was me.

We didn’t have an analysis department at all, so we built one from nothing. We funded two lads through their masters at Anglia Ruskin University, so alongside their studies they worked for us part-time, 20 hours a week. It was a good way to prove to the club that it could work and that, yes, it really was a full-time job.

It started really well, and we’ve just grown across all areas ever since. The whole network of staff has grown and grown to deliver a huge support programme to the coaching staff and players – we are really proud of what we’ve achieved in that nine years.

I think a lot of what we have done goes back to that zero-budget mentality I talked about before. If you try to innovate and be an early adopter of certain things – willing to be the guinea pig, really – then you can get in before there’s a huge cost attached.

We’ve done that with quite a few things over the years; some have gone really well, some not so much. But I’ve always tried to keep an eye on new innovations, and in one catch-up during lockdown Mark and I got talking about the Kairos scheduling platform. We had both read an article about it and were interested; we are both very organised people who like to front-end things.

"if all you judge yourself on is the success or failure of the team, it can create quite a fragile existence"

We knew when we returned after the break it was going to be small-number training, so we identified Kairos as a way of communicating our decisions and plans quickly and efficiently to the whole group. Gordon, our kit man, knew which players were arriving at which times; Paul, who managed our food, knew who needed to eat and when; and the players knew which group they were in and where they needed to be.

What’s the meet time? Where do I need to be? What time’s dinner on a hotel trip? What time are we leaving in the morning? All those things are just on there, and everyone knows everything as soon as we know it. I don’t think anyone asked me a single one of those questions last season. That means, on matchdays in particular, the players can relax and focus on what they really need to do.

We want the players to feel as supported as possible, of course, but we also want their experience when they’re at Cambridge United to be rich and fulfilling – a different experience to anything they’ve had elsewhere.

With my background in education, I’ve organised lots of education-related events for the players. We’ve got a couple of lads doing degrees, others are doing online courses. I think it’s important for the players to let their brains go elsewhere so the football bit isn’t as all-consuming.

Being judged after a game at 5pm on a Saturday or 9.30pm on a Tuesday is difficult. Really difficult. If all you judge yourself on is the success and failure of playing in a winning or losing team, then that can create quite a fragile existence. Having something else to focus on outside football can help encourage a balance – because when football retires you, and it always will at some point, players need to find something to fill what can be a dangerous void.

"what can i do to build players into strong characters who don't just see themselves as footballers?"

I’ve worked with six managers in my nine seasons as head of performance, and there have been a lot of players pass through in that time. That’s a lot of people to whom I’ve said: “Hello, and welcome to Cambridge United.”

I might then help them find a place to live, or suggest places to go and eat, or advise on which schools their kids might go to. That’s quite a small connection, really, but in my role can I make that connection bigger?

On the pitch, I’m not the ‘bad guy’ who has left them out of the team on the Friday and then left them on the bench on the Saturday. I can have a different relationship with them. I’m not trying to be their best mate, but I can ask them the questions the manager might not have time to.

Are you in the best physical shape you can be? Have you worked hard enough this week? What’s your breakfast before you come in? What’s your sleep routine? Are you ready for that hour and a half, two hours on the grass every day, to give your absolute maximum? Are you working hard enough in the gym? And if not, why not?

Off the pitch, what can I do to try and build our players into really strong characters who don’t just see themselves as footballers? What are they doing in their spare time? What opportunities can I provide them?

Every player’s time at the club is just one chapter, isn’t it? But while they are here, we are with them 270, 280 days a year, if not more. That’s a lot of time to spend saying hello in the morning, telling them what to do in training and saying bye at the end of the day. I’m not sure that’s the way I want to live my life, and I don’t think they do either.

That time gives you the opportunity to build a connection with each and every one of them. To get to know them as people rather than just players. That, to me, is crucial.