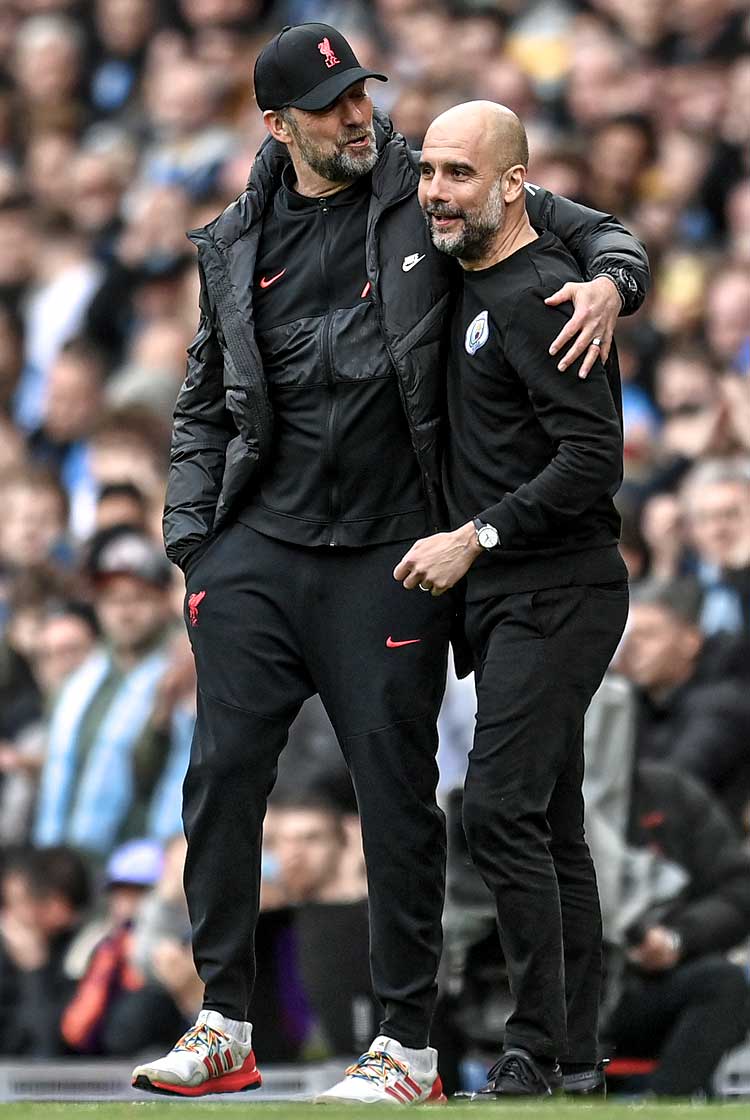 Manchester City were made to rue a string of missed chances in a match billed as a title-decider against Liverpool, but managed to hold on to their one-point lead at the top of the Premier League as the two teams played out a draw at the Etihad. City dominated the first half, and could have been out of sight but for Alisson in the Liverpool goal and some wasteful finishing – but Liverpool clung on, and hit back with an equaliser in the first minute of the second half. Jürgen Klopp now goes into the final seven league games of the season needing Pep Guardiola and his side to slip up if Liverpool are to overturn that one-point deficit and win the title. Both teams are also still in the Champions League, and face each other again next week in the FA Cup semi finals.

“We know now that one game and a dropped result, then we will not be champions,” Guardiola said. “Will it be easy? Absolutely not, but it will be difficult for them too."

"What a game. Wild," said Klopp. "Now it is seven games to go for both teams. We will not stop chasing now. That is clear."

Guardiola moved away from his usual single pivot in a 4-3-3, going up against Liverpool’s 4-3-3 block with a double pivot in a 4-2-3-1 structure. The hosts had Phil Foden on the left and Gabriel Jesus on the right as wingers on their natural sides, rather than the inverted forwards Guardiola usually prefers. Kevin De Bruyne played as the number 10, moving from side to side in the inside channels to receive between the lines (below), with Raheem Sterling up front. The double pivot of Rodri and Bernardo Silva supported City’s attacks. It was likely that Guardiola went with a two in front of the defence to deal with Liverpool’s threat on the counter-attack.

As Liverpool predominantly defended with an extremely high back line, City looked to exploit the space in behind with passes over the top (below). City’s full-backs pushed forward, although for the most part they only did this one at a time, leaving three defenders at the back with the double pivot in front of them. Both Foden and Jesus then pushed into the inside channels, hoping to lock on to Liverpool’s full-backs and create more space on the outside for the overlapping full-backs. De Bruyne continued to roam between the lines, and would sometimes rotate with Foden or Jesus to move out wide.

City also looked to play over Liverpool by targeting the space behind left-back Andy Robertson, and Jesus bent his runs through the right inside channel. Jesus scored City’s second goal with a run into this space – although that goal came from the second phase of a set-piece – and he was a constant threat in the second half. When De Bruyne moved out wide, João Cancelo switched play to the right after cutting back on to his right foot at left-back (below). However, Jesus’ decision-making in the final third often let him down. After dragging a Liverpool centre-back out of position, he should have found a teammate in the centre – but his final ball lacked quality.

As well as Jesus offering runs beyond the Liverpool defence, Sterling constantly stretched Liverpool’s two centre-backs with frequent movements across the visitors’ back line before bursting into the space in behind. Whenever one of Liverpool’s number eights jumped forward to press, De Bruyne moved across to receive on that same side. If Liverpool’s second line then failed to close him down, the Belgian could connect with Sterling’s penetrative runs (below). Sterling’s runs forced Van Dijk and Matip back, which then made more room for De Bruyne to receive between the lines. City arguably looked for the space beyond Liverpool’s defence too much in the second half, and lacked the control they had in the first half as a result.

Liverpool’s 4-3-3 made good use of space out wide during their build-up, working around Manchester City’s 4-4-2 defensive block. Andy Robertson and Trent Alexander-Arnold pushed forward, with the central midfield three more reserved, offering support through the inside channels. As both wide forwards moved inside, Diogo Jota dropped towards the ball (below). Liverpool worked the ball into their advancing full-backs, who then looked for direct runs from Mo Salah or Sadio Mané, or switches to the far side. Switches from left to right were most effective in the first half. One such switch led to their first goal after a difficult start.

The home side alternated between a mid-block and a high press. Liverpool struggled to connect through the centre of the pitch, especially as City’s far-side winger narrowed to join the press. From here, the hosts' central midfielders could cover Jordan Henderson and Thiago, while De Bruyne or Sterling marked Fabinho (below). Liverpool only really got out when they moved play out wide quickly.

Liverpool improved after the break, with Jota remaining higher and the front three causing real problems. Liverpool’s number eights also supported play into their full-backs with higher and wider positioning. Henderson did this on the right (below), with Thiago doing so on the left. Henderson’s consistent support produced more effective rotations on the right, which in turn meant Alexander-Arnold and Salah were far more threatening after the break.

In the second half, Liverpool asserted themselves on the game more, while City focused more on transitions. Luis Díaz was eventually introduced to support Robertson on the left, with Mané moving to centre-forward. Salah and Alexander-Arnold continued to rotate on Liverpool’s right (below), with centre-back Joël Matip pushing higher in the inside channel. Henderson moved into a higher central position, often moving beyond Mané to threaten with central runs around the City centre-backs.