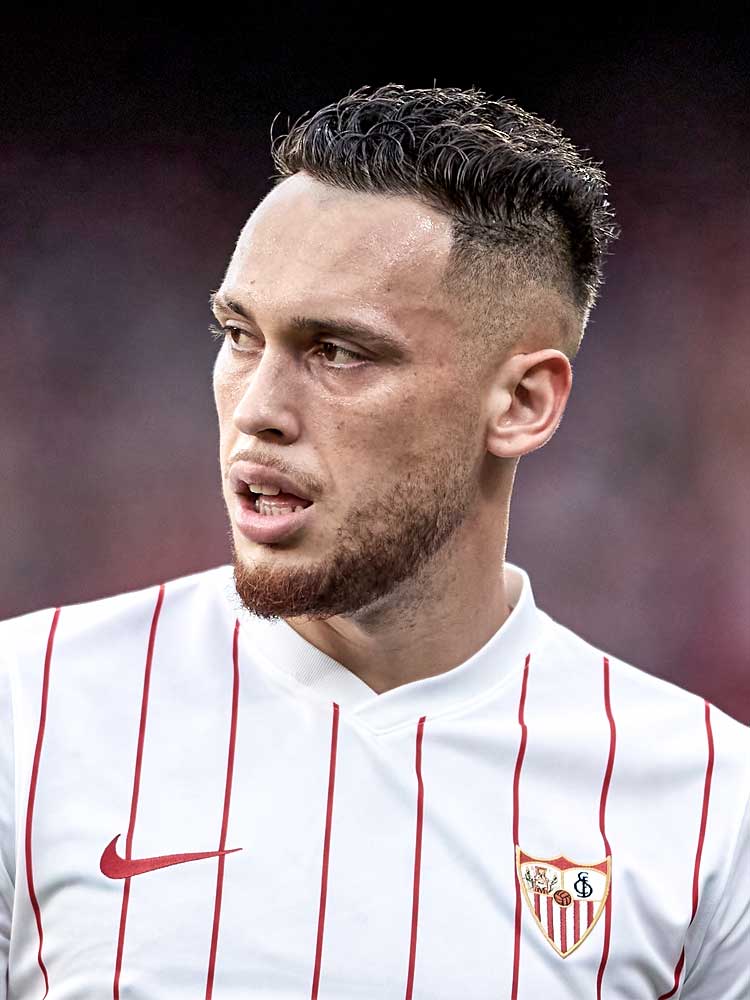 Profile
It was none other than Monchi, Sevilla's admired and influential director of football, who scouted Lucas Ocampos ahead of his €15m transfer from Olympique de Marseille in July 2019. Aged 24 when he signed that five-year contract, like so many of Monchi's other signings the Argentinian forward quickly settled and impressed.

Ocampos finished his first season with Sevilla with a combined 17 goals and assists, and a Europa League winner's medal. Admired by Monchi, Ocampos has also since been praised by Lionel Messi for his performances with the national team. "The appearance of Lucas Ocampos was extraordinary for the good of the group," he said.

Tactical analysis
Ocampos is a skilled and versatile attacker who usually plays as a wide forward but can also be deployed as an attacking central midfielder or as a number 10. He can operate in tight spaces and demonstrates signficant tactical intelligence in creating space for his team to attack.

His movement is a particular strength, and one complemented by sound timing when he makes runs to join attacks, to the extent he often loses his marker with clever out-to-in movements from the wing. As content moving towards play to support in build-up phases as he is determined to exploit spaces in behind, that same judgement means him also identifying the right moment to offer a passing option between the lines.

He is a threat when attacking one-on-one and with space to pursue (above) when, because he can move either left or right while dribbling, defenders can’t simply encourage him on to his weaker foot. When doing so his impressive technique means him regularly beating his opponent; he similarly consistently beats defenders before advancing into the penalty area and creating a shooting opportunity for a teammate, but even if his delivery and the speed of his decision-making has improved during his time in Seville, his final ball too often lets him down.

His goals return is also too low for a player who gets into threatening positions inside or near the penalty area (below) with the frequency that Ocampos does. He favours cutting infield and shooting from distance and, given his size, is a threat if attacking the six-yard box when play has progressed along the opposite wing.

He doesn't generate enough power to consistently threaten from range, however, and he therefore often hits long-range shots straight at the goalkeeper or over the crossbar on the occasions he generates the power he needs. When attacking crosses he can also struggle to adjust his feet as the ball approaches him, meaning he often needs to take an additional touch in an area where time and space is so minimal that his eventual shot gets blocked.

Regardless, there is little denying that his technical ability is complemented by a winning mentality. Ocampos is ambitious and driven, performs with consistency, and is willing to make sacrifices for the sake of his team.

Role at Sevilla
Ocampos' ability to play in a variety of positions and to adapt to the strengths of their opposition or Sevilla's formation means he consistently features in their starting XI. He is most convincing as a wide player in a 4-3-3 or 4-2-3-1, as he also was for Marseille and continues to be for Argentina.

At Marseille he regularly drifted into central positions from where he quickly sought to play forward passes to a teammate making runs in wider territory, and then moved to attack off the shoulder of a central defender, displaying admirable awareness and timing when doing so. At Sevilla, his is a wider role (above).

Sevilla most consistently deploy him as an inverted wide forward who moves infield from the left and contributes to their grasp of possession. He regularly drifts from his starting position to make runs as a third man and to enhance their short passing approach and their attempts to progress possession via one-twos.

He enhances their attacking potential with his speed, power, creativity and goal threat, even if he is a less consistent goalscorer than he was during 2019/20. As their left-sided forward he plays from deeper territory than their most advanced attacker – most regularly Youssef En-Nesyri – but he continues to contribute close to goal (above).

There are occasions when Ocampos dribbles into the final third, others when he switches play, and others still when he seeks to combine with teammates to create opportunities to shoot on goal. His understanding with Jesús Navas, Sevilla's senior right-back, after moving infield is particularly strong – he draws opponents to create passing lanes to him, then plays the ball before running to attack his crosses into the area.

His performances have contributed to him appearing for Argentina, who also often use a 4-2-3-1, if not a 4-4-2, and select him towards the left, right, or as their number 10, and encourage him to operate from between the lines and to withdraw into midfield. As is the case for Sevilla, his power and determination to recover the ball are enhanced by his understanding of when to delay opponents by holding his position (above), when to press with intensity, and of their overall defensive balance. He has also proven effective at recognising when to help a teammate to create an overload and press both the ball and a single opponent.