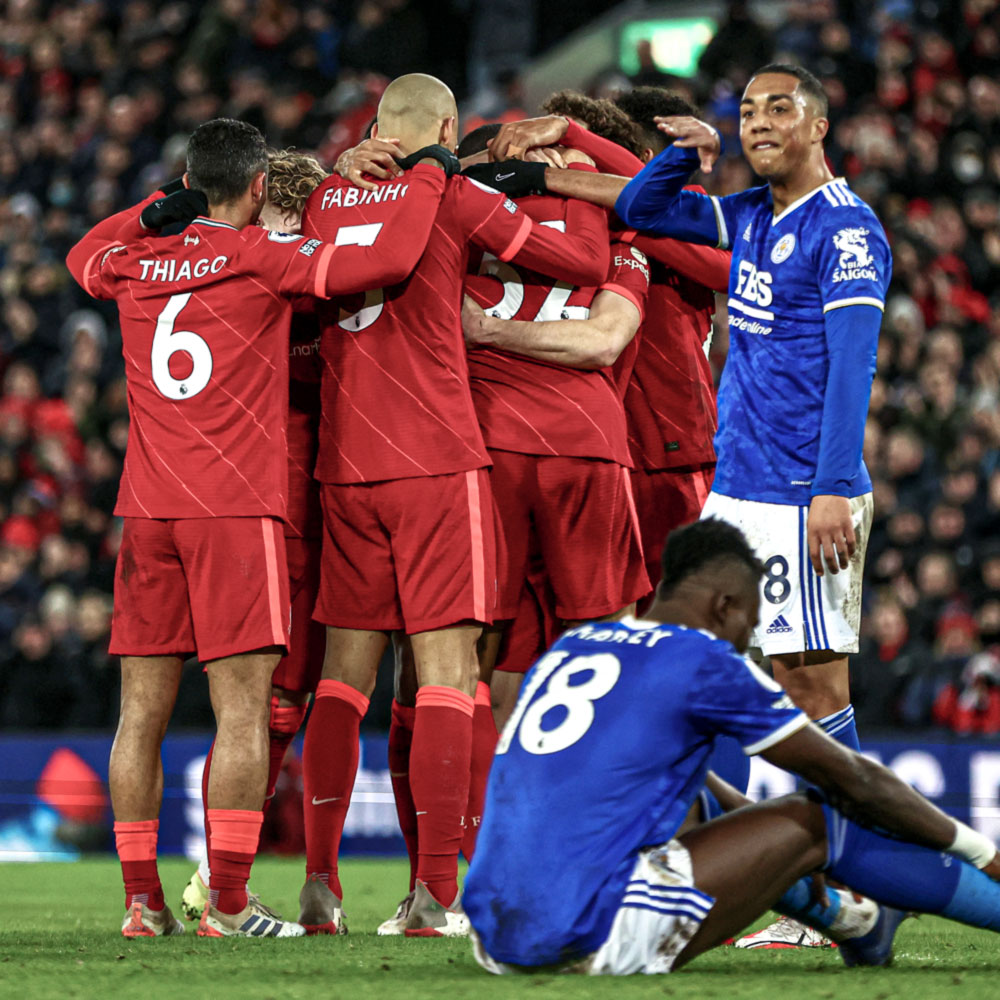 Liverpool exacted revenge for their surprise defeat to Leicester over the Christmas period with a comfortable 2-0 victory over Brendan Rodgers' team at Anfield. The hosts dominated throughout, with Luis Díaz particularly impressive on his first league start since joining the club from Porto in the January transfer window. But it was the more familiar figure of Diogo Jota who proved the difference, scoring late in both halves to secure an important three points in the Reds' continuing pursuit of champions Manchester City at the top of the Premier League table.

“It was his first game and it was probably one of the best I ever saw from a new player, that’s true, because he looked completely natural,” said Liverpool manager Jürgen Klopp of Díaz. "But it was only a first game and we have to see how he adapts to working with intensity in the Premier League. There is no rush. Last night was a very good opportunity to start him because of Sadio not being here yet and Mo coming back from an incredibly tense tournament and, yes, he showed up.”

"We restored the pride," said Rodgers, whose side arrived at Anfield on the back of an FA Cup mauling at Nottingham Forest. "The spirit was really good, but set-pieces are an achilles heel for us."

Díaz’s instant impact
Jürgen Klopp set his Liverpool team up in their familiar 4-3-3 in-possession formation, to attack a Leicester team defending in a 4-4-2 block. The returning Mo Salah started on the bench, meaning Diogo Jota operated on the right of a front three also featuring Roberto Firmino as the central striker and recent arrival Luis Díaz on the left. It was on that side that the hosts used rotations to make early progress, with Díaz supported by forward runs from Curtis Jones and Andy Robertson. Thiago and Fabinho formed a double pivot to protect against any central counter-attacks, while centre-backs Joël Matip and Virgil van Dijk regularly stepped into midfield in possession (below). This worked to draw Leicester midfielders to the ball, creating more room for the left-sided trio to receive and create the overloads that threatened the visitors’ back line.

Box attack
The home side also looked to progress through the inside channels, and exploit the gaps between Leicester’s wide and central midfielders. Firmino dropped away from the centre-backs to offer through one inside channel, while Jones pushed forward on the opposite side. Jota and Díaz took up narrower positions in advanced central areas, in effect creating an attacking box (below). This also left both flanks open for the full-backs – Robertson on the left and Trent Alexander-Arnold on the right – to provide width around the visitors’ back line. Fabinho and Thiago maintained their deeper positions, offering cover and giving Klopp’s team control in midfield.

The 2-3-5
Liverpool dominated the ball throughout, but in the second half they adapted their shape as they built against the Leicester mid and low blocks. Thiago and Jones moved wider either side of Fabinho (below), which worked to pull the opposition midfielders away from central areas and create passing lines into the narrow front three. With the centre-backs supporting behind and the full-backs continuing to take up very high positions that offered a route outside the Leicester back line, the hosts’ in-possession shape looked increasingly like a 2-3-5 that gave them a strong platform to make regular final-third entries.

Playing over and around
After the introductions of Harvey Elliott and Mo Salah for Jones and Firmino, the Leicester block dropped deeper and deeper. Their front two took responsibility for pressing Liverpool’s wider central midfielders, which enabled the midfield to stay more compact and block access into the narrow Liverpool front three. This opened up more space in wide areas for Robertson and Alexander-Arnold, who were often the hosts’ highest players in the second half. Liverpool also looked to play more direct balls over and in behind the Leicester defence, with Salah’s trademark runs across and beyond from the right (below) posing an additional threat for the last half hour.

Relying on counter-attacks
Brendan Rodgers set his Leicester team up in a 4-2-3-1 formation against Liverpool’s 4-1-4-1 defensive block, but they spent the majority of the game in their out-of-possession 4-4-2 shape. As such, they looked to counter-attack through James Maddison’s withdrawn central position as a number 10 and the direct, penetrating runs of Patson Daka in behind. Wingers Marc Albrighton and Ademola Lookman looked to support where possible, aiming to exploit any spaces left by Liverpool’s advancing full-backs (below). Despite this, the visitors struggled against a Liverpool team set up to protect against central counter-attacks and employing a relentless and effective counter-press. Maddison in particular was often overloaded during attacking transition, limiting his ability to connect into runners.

Too compact in attack
In the rare first-half moments when Leicester managed to secure a spell of possession, Liverpool dropped into a compact mid-block. The visitors’ central-midfield unit was too condensed, however, and the front line lacked the width and depth required to even come close to troubling the hosts. Leicester tried to build play into their full-backs, or over towards the wingers (below), but the Liverpool midfield found it too easy to push across and lock play towards the touchlines. From here, Leicester had no positive way out; they either played hopeful balls along the touchline or recycled through their centre-backs, neither of which led to any significant or sustained threat.

More expansive
In the second half, the visitors made a noticeable effort to stretch their attacking structure and offer more effective options in a wide build-up. Maddison and Kiernan Dewsbury-Hall operated more as number eights in what now looked more like a 4-3-3 (below), and looked to link play through the inside channels and out to the full-backs or wingers. The revised shape allowed the midfielders to offer better support in these wider areas – this had been lacking in the first half.

Wider number eights
Kelechi Iheanacho and Youri Tielemans were introduced with half an hour to go, with Tielemans joining Maddison as wide number eights either side of Dewsbury-Hall (below). This gave Leicester a better connection with their full-backs and wingers, and their ability to look for Albrighton and Lookman quicker helped push the Liverpool full-backs deeper. This created more room for the Leicester midfield to receive and increased the pressure on Liverpool’s midfield three, although the reality was that neither Maddison nor Tielemans were ever able to support their front line in the final third as quickly as they needed to against Liverpool’s aggressive, recovering defenders. The visitors struggled to create anything of real note and haven’t now won in the Premier League since shocking Liverpool at the end of December.