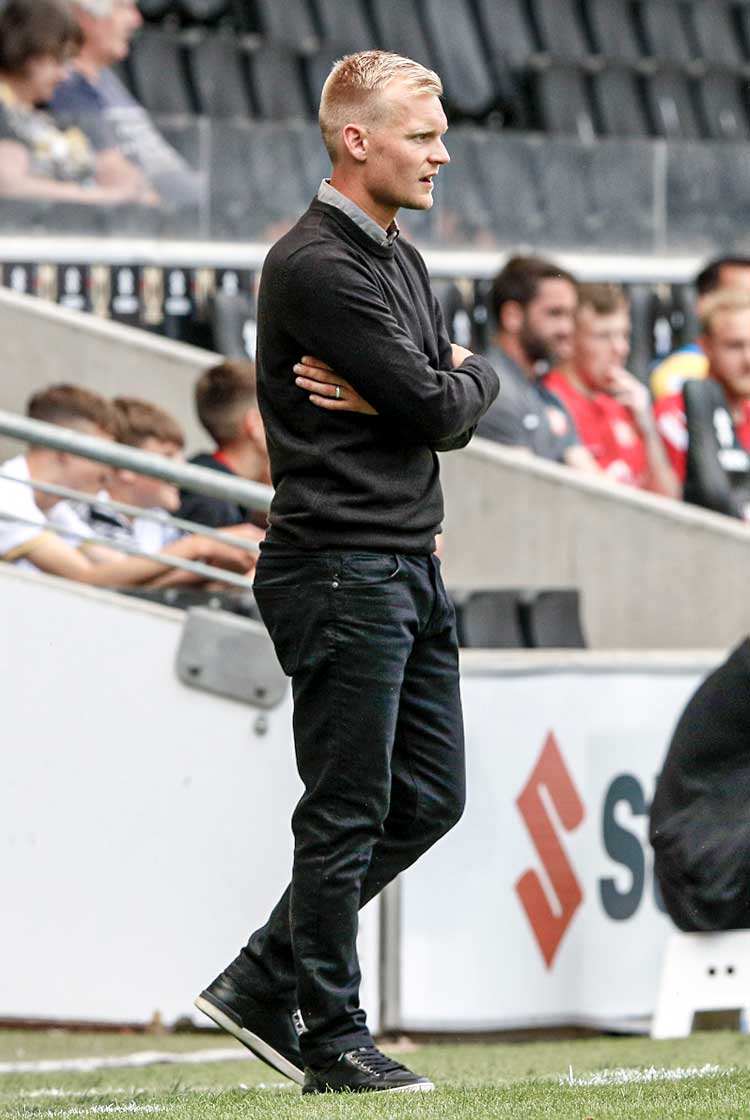 How to beat a medium block

Liam Manning was our guest on a Coaches’ Voice live webinar shortly before he was appointed as head coach at MK Dons in August 2021. At the time, he was in charge at Belgian side Lommel SK, having taken over in 2020. He used examples from his then team’s 2020/21 campaign in presenting on how to beat a medium block – a team set up to engage just above the halfway line.

Manning moved into coaching early in his career, having been released by Ipswich Town at the age of 20 as a player. He spent 13 years working in academy football at Ipswich and West Ham, before becoming director of coaching and academy director at New York City FC – part of City Football Group, the same group that owns Lommel as well as Manchester City. It was with CFG that he developed his possession-based philosophy; as part of our live webinar, he talked CV Academy subscribers through his thoughts on how to beat a team set up in a medium block.

Once your team has found its way past the first line of the opposition’s out-of-possession shape, there are three options for how to penetrate further up the pitch. The main aim in doing so, Manning said, was not to be predictable and so keep the opposition guessing as to how your team is going to attempt to beat the block. We have summarised some of Liam’s suggestions below, but if you want more and would like to watch the webinar in full on demand, you can do so here.

The first challenge facing a side looking to beat a medium block is getting past the opposition’s first line. To do this, you need to create a numerical advantage so we can take this line out of the game.

A medium block will often be set up with two forwards, so the in-possession team will need to create a three-player back line to build through. This could be through a defensive midfielder dropping to the side of the two centre-backs and the full-backs pushing on, or it could be through a full-back dropping back alongside the centre-backs and the other full-back pushing forwards, or through a central midfielder dropping between the centre-backs – there are lots of options here. If the forwards narrow to block off the central areas, you can play around them; if the forwards stay wider to cut off progress out wide, then the central player of the three can step out with the ball.

Depending on how the first line has been overcome, the team has three options for how to proceed.

If the opponents react to efforts to move the ball wide to progress around the first line by working harder to get across and prevent the 3v2s mentioned above, they will inevitably switch off at some point – and gaps will then be created. It might not just be one switch of play that creates this space, however. It might need three or four to pull the opposition apart.

This could open up a central lane for a direct pass into the striker, or pull a centre-back out towards a midfielder, which in turn would create an opportunity to clip a ball over the top for the striker to run on to. Alternatively, it could free up a midfielder to receive to feet between the lines to turn.

If the ball is lost in a central position, the team should be set up well to counter-press or prevent a counter-attack from being launched.

Option 3: Attack the opposite side

If the opposition have moved over to one side of the pitch, the full-back on the opposite side could move into space high up the pitch to receive a long diagonal pass. If this happens, the central midfielder on that side of the pitch must work extremely hard in running across to support the full-back and be in position to compete for a second ball if the diagonal pass is not successful.

Now in his first managerial role in England, Manning has the chance to show off his work in League One. If you want to learn more from top coaches like Liam Manning and many, many others, and become the best coach you can be, visit the Coaches’ Voice Academy, here.