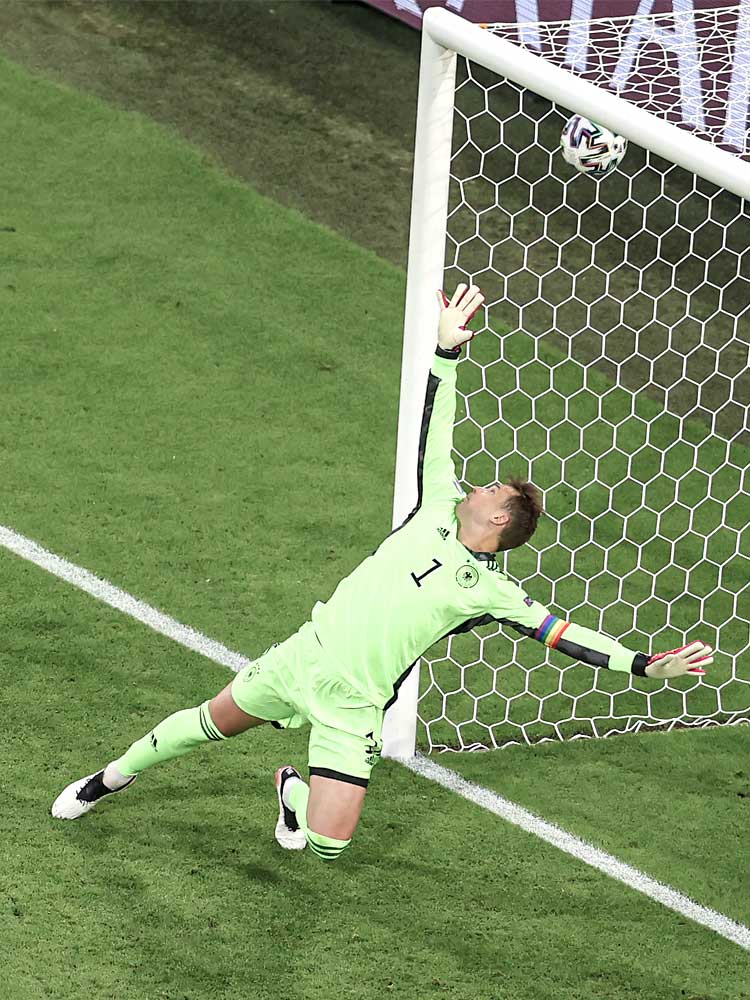 World champions France won their first ever group stage match at a European Championships against Germany when Mats Hummels' own goal rewarded their superiority. Kylian Mbappé and Karim Benzema also later had finishes ruled out for offside as they threatened to start Euro 2020 in ruthless fashion. "We played a big game, against very good opponents," said their manager Didier Deschamps. "I knew my players were going to be ready, but we were in everything, in the fight. We didn't struggle that much in the second half. It was a tough match with quality, talent." Germany are already under intense pressure in a group that also includes reigning European champions Portugal, and Hungary. "France are strong," said their manager Joachim Löw. "They sat very deep after the lead and didn't give us much space."

France were set up by their manager Didier Deschamps into a 4-3-3 formation led by the front three of Antoine Griezmann, Kylian Mbappé, and the recalled Karim Benzema. Their opponents, Germany, defended with a 5-3-2, via Kai Havertz withdrawing into midfield, and Joshua Kimmich and Robin Gosens into defence.

Les Bleus were patient and methodical in possession. They built slowly as they advanced towards Germany's goal, circulating the ball across the pitch and in defence. They sought to use rotations between their full-backs and wide forwards in wide territory, usually doing so when either central defender had the ball or if one of their midfield three had withdrawn into a deeper position. When possession was played into the feet of a wide attacker he sought to play another pass on the outside for an advancing full-back, which was then followed by a third-man run. Doing so often ensured that they continued to progress the ball. If, towards the right, Griezmann and Benjamin Pavard rotated, Benzema drifted to ahead of Griezmann in the same half-space to receive the next pass from Pavard, and Benzema, in turn, would then play to the midfielder who had moved to provide the next run.

France also looked to form triangles to disrupt Germany's sense organisation, and it was those, and their rotations and third-man runs, that posed their most consistent threat. Griezmann and Mbappé also regularly swapped wings – the latter's pace regularly troubled Germany, and increasingly did so after them taking the lead meant them increasingly attacking on the counter.  If during moments of transition they can improve the timing of their passes and their runs target spaces in behind, they can become even more effective.

Deschamps was content for them to concede possession for lengthy periods, particularly after they took the lead, and to rely on countering. The control they demonstrated without having the ball and the approach they applied when they did have it suggests they are capable of imposing themselves more and creating more quality goalscoring chances, when required.

Germany were organised by their manager Joachim Löw into a 3-4-3 formation led by Serge Gnabry. Their opponents, France, defended with the same 4-3-3 with which they attacked.

Löw's team had a significant grasp of possession but were confronted with having to break down an organised and disciplined defensive block. When they were attempting to build play, Kai Havertz or Thomas Müller withdrew into midfield to contribute to the formation of a box intended to overload France's midfield three. France had to solve how, with a front three and midfield three, to apply pressure to Germany's back three while limiting the space of their two central midfielders, follow Havertz and Müller, and restrict the freedom of their wing-backs.

They relied on those in their front three closing down their closest central defender when they received the ball, when the other two sought to block passing lanes into midfield and, if necessary, move to their central defender. Their central midfielders also worked to block passing lanes to Havertz and Müller, and to be available to move and close down Toni Kroos and Ilkay Gündogan if the cover shadow provided by their front three was beaten. When possession was played from a wider central defender to a wing-back then the ball-side midfielder or full-back, depending on how that wing-back had advanced, moved to press him, and N'Golo Kanté moved to take the relevant attacker withdrawing into midfield to prevent Germany from swiftly playing out and eliminating France's midfield. The work ethic of their front six was significant in their success.

Germany attempted to draw France's midfielders towards theirs before possession was played, in an attempt to create a five-on-four between their wing-backs and front three and France's back four. France were prepared for them to do so, however, so worked to keep the distance between their defence and midfield minimal. After they took the lead they became even more compact and therefore even more difficult to play through, so Germany became reliant on bouncing possession into midfield and out to the far-side wider central defender, to where he could advance outside of France's front three, and potentially midfield. Their defenders lack the creativity of their midfielders, however, and by advancing they risked leaving increased space for Kylian Mbappé to advance into.

The potential reward, regardless, was feeding their wing-backs into positions from which they could cross – when Germany posed their greatest threat – but even then France impressively recovered by making diagonal runs back towards their goal after switches of play. Their defenders and midfielders defended those crosses well, and complemented doing so by screening cut-backs and taking second balls. Germany's finest chance came from a cross, when Gnabry's strike bounced over the crossbar early in the second half, but they were attacking against a back four that rarely became stretched – largely because of the efforts of those in front of them.

For their part, Germany didn't do enough to find solutions to the spatial problems they were encountering. Too often five or six players were positioned on the same line as France's back four, and attempted to receive to feet without posing a threat in behind, even if that space was limited.