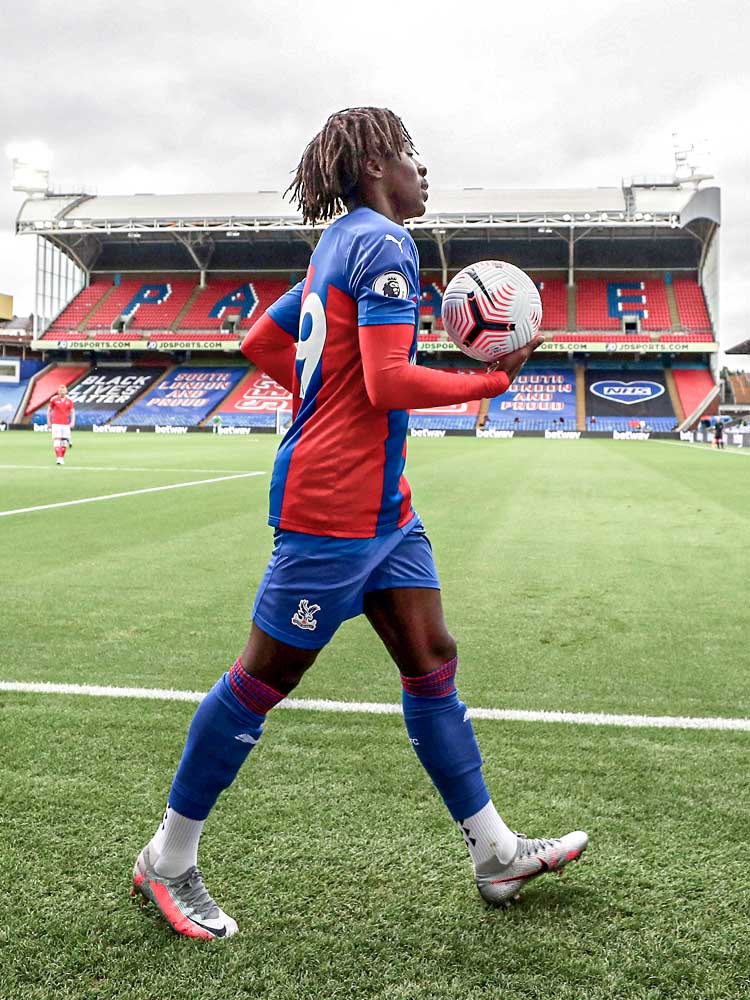 Profile
Eberechi Eze attracted attention from across the Premier League with his performances for Queens Park Rangers throughout 2019/20. Having been one of only nine outfielders – at any club – to start every single Championship game, he showed he was ready to make the step up to the Premier League.

It was Crystal Palace who won the race to sign the then-22-year-old, paying around £19.5m in August 2020 for a player with the vast majority of his career ahead of him and a great deal of potential. He quickly became a fixture in his new team's starting XI, and Roy Hodgson, then Palace's manager, is confident there is plenty more to come. “He is a player who will improve all the time,” Hodgson said. “Most importantly of all he is getting used to the intensity of the Premier League and all the other things that the Premier League requires from you.”

Tactical analysis
Eze broke through as a winger and, to begin with, largely played on the left for QPR, but the fact he was handed the number 10 shirt only a few months after making his first-team debut gave an indication as to where he believes his future lies. He impressed as a creative, dynamic number 10 for QPR, floating across the front line and into deeper positions and knitting together his team’s moves with clever movements and deft touches.

There has been less opportunity to play as a 10 for Palace, but given his history out wide he was quickly able to adapt to the 4-4-2 Hodgson favoured. He is more comfortable on the left than right, but he is right-footed and does not stick to his wing. He is at his best coming infield and looking to get on the ball in the left half-space, where he has more options to progress play.

Opponents are quick to close him down and often double up on him. When he receives to feet between the lines, a defender will quickly run to meet him instead of allowing him time to turn. He shows good strength and awareness in those situations, however, and he has the ability to hold off defenders while looking for a pass (below). Having done so, he is best when playing a simple pass to find a teammate rather than overcomplicating trying to find a runner in behind.

He has brilliant vision and an awareness of his surroundings, which allows him – even without particularly outstanding passing ability – to pick out teammates when many others would not succeed. He does so with clever flicks, making a run across a defender to encourage that defender to move in the same direction, and then disguising a deft flick back in the opposite direction into the space he has created. Success does, however, sometimes lead to him attempting a difficult pass when there is a simpler option available.

He is a threat on goal from distance and isn’t afraid to gamble from range when the opportunity presents itself. Although he shoots far less for Palace than he did for QPR, they still try to get him into positions to finish, and place him on the edge of the penalty area at corners – when he isn’t the one taking the corner – with a view to turning any clearance back towards goal. He is very good at wrapping his right foot around the ball to find the far corner – many of his 14 goals in his final season at QPR in the Championship came from that kind of shot. He generally shoots after running on to the ball, rather than receiving a pass with his back to goal, but that kind of opportunity has presented itself less frequently in the Premier League than it did in the second tier.

Eze is also an extremely talented set-piece taker, able to deliver quality balls for teammates to attack and able to shoot from direct free-kicks (below). He is also exceptionally composed at penalties, opting for the goalkeeper-dependent method used by the likes of Eden Hazard with which the taker waits for the goalkeeper to move before slotting the ball into the opposite corner. It is a sign of Eze’s confidence that he is able to use that technique at such a young age, though while he had plenty of success at QPR, at Palace he hasn’t yet been able to assume penalty-taking duties from Wilfried Zaha.

Role at Crystal Palace
Eze has so far been given far less freedom at Palace than he had at QPR. He played on the left or as the number 10 in a 4-2-3-1 at QPR, where he had licence to roam the attacking third in search of space, but in Hodgson’s 4-4-2, Eze’s role was more rigid. He had more defensive responsibility at Palace – which is understandable given the step up in quality – and was asked to retain a more consistent position in their out-of-possession formation.

He took well to his role on the left side of midfield, accepting his share of defensive responsibility with maturity when plenty of young players might have followed a big-money move with the assumption that they can simply carry on as before. Eze did a good job of holding his position in Palace's flat midfield four (below), and broke at pace once Palace won possession in the hope of making the most of counter-attacking opportunities. Along with Zaha and Jordan Ayew, Palace have plenty of players who can carry the ball forwards at pace and create chances on the break.

When Palace had established possession, Eze had rather more freedom, but Hodgson’s team did not dominate the ball very often so chances to drift away from his position were relatively rare. He had to make those chances count more than at his previous club, and that meant being less wasteful with his passing when he did get on the ball; he sometimes rushed and miscued his attempts to find a teammate in the final third.

A little too often at QPR, his enthusiasm to attack filtered into the defensive side of his game; he would jump forward to meet his opponent too quickly, leaving his team exposed behind him. In a well-drilled team at Palace, there was no room for vacating his position in midfield, and he had stopped doing so under Hodgson’s guidance following his move to the Premier League.

As he continues to develop, he will become more efficient with the ball and, in doing so, become more valuable and more effective at the top level. Having made a seamless step up to the Premier League at so young an age, he has time on his side to improve yet further.