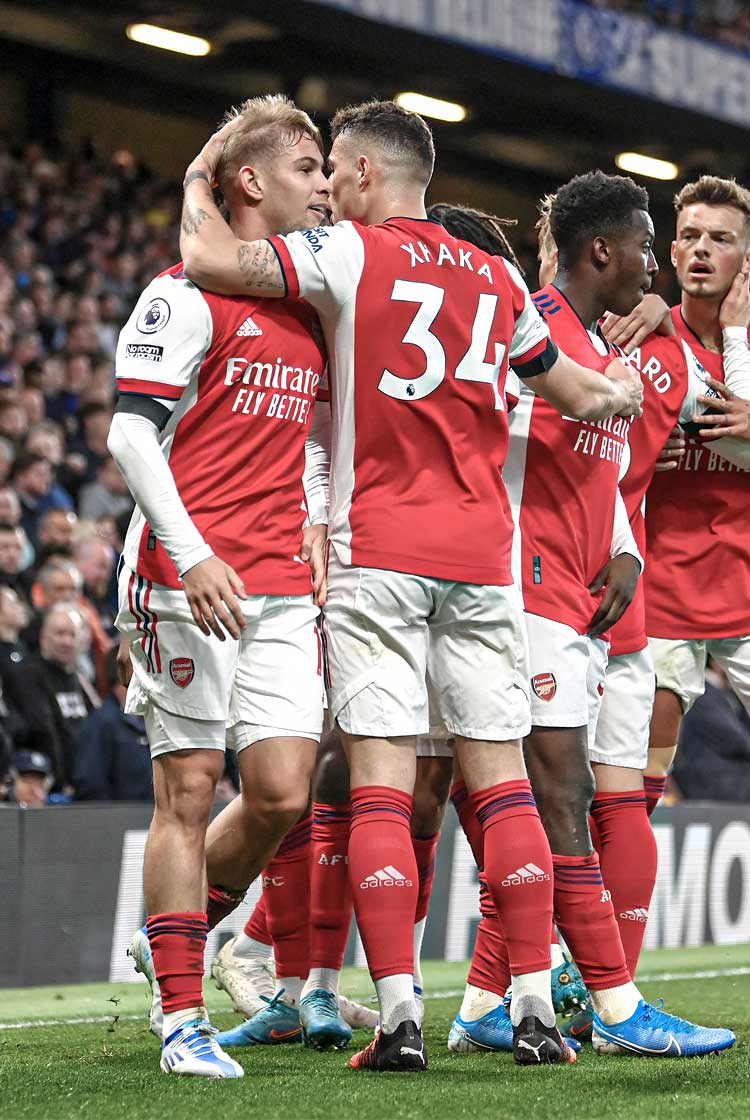 Arsenal made a huge statement in their pursuit of a top-four place with this unexpected win at Chelsea. Coming into the game, Mikel Arteta's side had lost three consecutive games, while Chelsea had won three in a row. However, Arteta was rewarded for a bold move in bringing Eddie Nketiah in for the trip to Stamford Bridge, with the young forward scoring twice on the night. Emile Smith Rowe and Bukayo Saka scored Arsenal's other goals to earn a memorable win and a crucial three points.

“I said to the players, if you want to be playing Champions League football, you have to go these stadiums and beat the top teams,” Arteta said. “So they have done it and I’m really proud of them, but I’m more proud of how we’ve reacted as a group in the past weeks. That gives me more energy to be here.”

Chelsea were set up in a 3-4-1-2 formation against Arsenal’s 4-4-2 defensive block. In the first half, Arsenal attempted to press Chelsea’s three centre-backs, with Eddie Nketiah pressing Andreas Christensen. Arsenal’s second line then adjusted, with Emile Smith Rowe pressing César Azpilicueta, and Bukayo Saka focusing on Malang Sarr (below). N'Golo Kanté remained as Chelsea’s deepest pivot, and was man-marked by Martin Ødegaard, with Ruben Loftus-Cheek and Mason Mount covered by Arsenal’s double pivot. The hosts struggled to connect into midfield from their back three, often building around Arsenal’s press into the wing-backs, or playing over the press to then compete for first and second balls.

Once they established possession higher up the pitch – partly due to Arsenal dropping off – Chelsea exploited the left inside channel. With both wing-backs high, they drew Arsenal’s full-backs out. Forward runs from Mount or bent movements across from Timo Werner exploited the space behind Ben White particularly well (below), with Arsenal’s closest centre-back then forced to cover across. Romelu Lukaku then pinned the other central defender, creating room for other runners to exploit central space and attack cut-backs and crosses. This resulted in two Chelsea goals in the first half.

Rotations (and mistakes) on the right

To disrupt Arsenal’s mid-block structure, Werner dropped into midfield and rotated with Mount. As Werner moved wide, Azpilicueta inverted from the right wing-back slot, often taking up a position between the lines (below). As Werner occupied the visitors' left-back, Azpilicueta moved inwards without being tracked. However, although this gave Chelsea an outlet to break through Arsenal’s block, it was a misplaced pass from the Spaniard that gifted Arsenal the chance to score their crucial third goal.

Chelsea manager Thomas Tuchel swapped Azpilicueta and James on the right, and Kai Havertz replaced Lukaku up front. Chelsea then built around on their right side more often, using the width and height James gave them to attack Nuno Tavares and get crosses into the middle (below). On the left, Werner still provided width, with Mount drifting into the inside channel and Marcos Alonso pushing into the penalty area. However, clear-cut chances eluded the hosts for the entire second half as Arsenal dug in for the win.

Arsenal operated in a 4-2-3-1 against Chelsea’s 3-5-2 defensive shape, which converted into a back five when the hosts defended deep inside their own half. Bukayo Saka held the width on Arsenal’s right, with Emile Smith Rowe moving into the inside channel on the left (below). This allowed Nuno Tavares to push forward from left-back, while Martin Ødegaard then moved across to the right. This gave Arsenal a midfield box to connect the three remaining defenders with the front three.

The home side went man-for-man when faced with Arsenal’s build-up. Timo Werner and Romelu Lukaku covered Arsenal’s two centre-backs, and also applied pressure to goalkeeper Aaron Ramsdale. Arsenal attempted to change their central midfielder structure with Mohamed Elneny briefly becoming a single pivot, Granit Xhaka vacating the space, and Ødegaard dropping into a number-eight position (below). Chelsea dealt with this well, though, and their pressing down Arsenal’s right side had a significant influence on the first half. Most of Chelsea’s best attacking play came from turnovers in this area, as Arsenal struggled against their press.

Although Arsenal defended deeper and deeper as the match wore on, their central-midfield overload helped secure possession when they did manage to lock Chelsea into a deeper block. Smith Rowe came off the flank to play like a second number 10 alongside Ødegaard, while Xhaka and Elneny supported underneath as a double pivot. This meant they had a midfield four and an overload against Chelsea’s three (below), which often forced one of Werner or Lukaku to work back to defend. Although Chelsea then broke up some of Arsenal's play, they also – crucially – had a reduced threat on transition. As a result, they did not trouble Ramsdale in the Arsenal goal in the second half.

Change to a back five

Once Arsenal had the lead, Arteta changed to a back five, and the team then spent significant periods in a low block. The double pivot remained, with Saka and Ødegaard used as number 10s. The width was provided by Tavares and substitute Cédric Soares; both posed a threat in the space left by Chelsea’s high wing-backs, who pushed forward in search of an equaliser. Direct passes for the wing-backs or centre-forward Gabriel Martinelli to chase were used to beat Chelsea's counter-press, and gave Arsenal an outlet to grab a fourth goal. That goal, scored by Saka from the penalty spot, killed the game off once and for all.