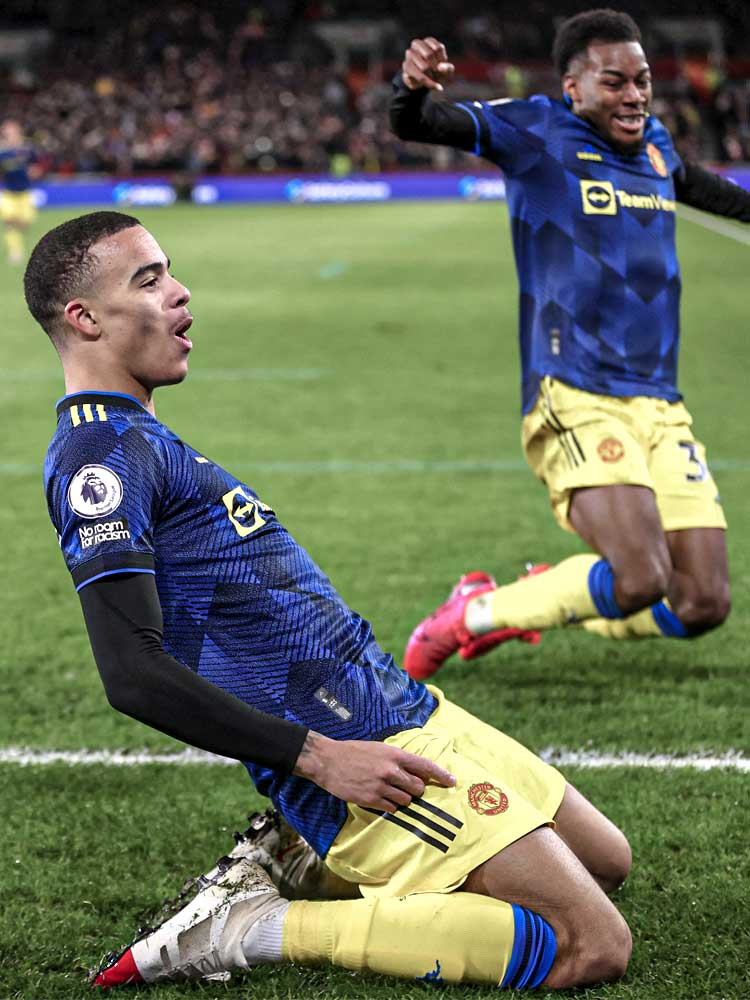 Manchester United resisted intense pressure to eventually secure an encouraging victory that strengthened their pursuit of a top-four finish. Only an impressive performance from their goalkeeper David de Gea meant that the score remained 0-0 at half-time, after which finishes from Anthony Elanga, Mason Greenwood and Marcus Rashford built a commanding lead. By the time Ivan Toney struck for the hosts, United's victory was secure.

"The first half we were second best in almost all aspects of the game, sloppy passing, missing 50-50 situations and hardly won any second balls," said United's manager Ralf Ragnick. "We were nervous on the counter-attack and were lucky at half-time to have a draw." His opposite number Thomas Frank said: "That was unbelievably tough to take. I'm very, very proud of the team and players. First half we absolutely destroyed one of the biggest clubs in the country. We were on the front foot, aggressive, we had six chances and should have been up 2-0 and they had zero. It would have been a completely different game. A bit of quality and they went 1-0 up and after that is was bit too difficult."

Strikers moving into midfield
Brentford were organised into an in-possession 3-5-2, and encountered Manchester United's 4-2-3-1 defensive block. The hosts’ front two of Ivan Toney and Bryan Mbeumo took turns regularly withdrawing to receive direct forward passes from a centre-back, often in the space in between or to the side of United’s double pivot. With United’s full-backs focused on the hosts’ wing-backs, Brentford ensured that United's entire defensive line was occupied by pushing one of their midfield three forwards to maintain their front two (below). Their remaining two midfielders then converted into a double pivot, which helped give the striker who had dropped an option to set the ball. Their double pivot was also able to cover against transitions in central areas.

... varied runs from midfield
When Brentford's front two held their positions in the centre of the pitch, their midfielders made various supporting runs. United’s full-backs continued to push forwards and press into the wide areas, which created gaps in the inside channels. Brentford’s number eights often made runs into those gaps (below), underlapping their wing-backs, leaving just a single pivot then in place behind the ball. Whenever Brentford’s front two pinned and occupied both of United's centre-backs, runs from their number eight were able to progress further up the pitch, and they received on the move. Their runs also stretched United’s double pivot, and created more space centrally. Brentford won lots of throw-ins in advanced areas and corners as a result of those runs, and they threatened from set-pieces throughout.

... transitions from midfield
Brentford proved effective when pressing from their withdrawn block, and they looked to attack at speed from an attacking transition after midfield regains. Their wider centre-backs would often step into midfield, pushing their wing-backs higher up the pitch. The closest centre-forward would then move wider to support the relevant wing-back, creating a central gap for the most advanced midfielder run into (below). Brentford’s other centre-forward then looked to run beyond United's defence, and was often targeted with direct balls forward.

Wide strikers
Brentford’s centre-forwards were content to remain wide during lengthier spells of possession (below), which helped stretch United’s two centre-backs. Central spaces appeared for runs, from a midfielder, through the centre of the pitch and between their two centre-forwards. With Brentford’s attacking line split, their wing-backs had less space to attack into, so they either moved infield to receive and progress play centrally, or they remained behind the ball, which meant the closest number eight could make a forward run. Despite progressing forwards effectively throughout, and in a number of ways, Brentford threatened most from set-pieces or individual counter-attacks, and lacked quality with their final ball once inside the final third.

United's lopsided attack
Manchester United attacked with a 4-2-3-1 against Brentford's 5-3-2 defensive block. Bruno Fernandes drifted towards the left from his role as their number 10, encouraging Anthony Elanga to attack infield and Alex Telles to advance from left-back (below). With Diogo Dalot also attacking from right-back, from the base of midfield Fred and Scott McTominay sought to provide defensive security and cover from behind United's adventurous full-backs – Mason Greenwood retaining his width on the right meant Dalot providing underlaps, and therefore Fred advancing to where Fernandes once was to link into the final third.

Overcoming Brentford's low block
Brentford's compact low block often frustrated United, regardless of their dominance of possession, throughout the first half. The hosts' narrow midfield three effectively limited access to United's attacking players, so Dalot and Telles were both required to move infield (below) and into the inside channels to provide an alternative route forwards. Their wide forwards adopted wide positions that encouraged them to attack one-on-one and, in turn, their attempts to build possession through the inside channels encouraged them to attack around, through or over their opponents.

Modified attacking shape...
After half-time United attacked with a more recognised 4-2-3-1 (below) in which Fernandes remained more central and closer to Cristiano Ronaldo and, as they sought to build around their opponents' block, their full-backs supported from inside of their wide forwards. Even with Fred continuing to move to support combinations in wide territory, United continued to struggle to feed Fernandes and Ronaldo between the lines and in behind; crosses into the penalty area also mostly proved ineffective, because of the overload that existed in Brentford's favour in their defensive third.

... then reverting to the previous shape
The visitors then reorganised to attack with the same shape witnessed throughout the first half, in which Fernandes moved to the left to support the overlapping Telles and Dalot and Greenwood combined on the right. The penetrative runs made infield and in behind from Elanga encouraged Ronaldo to withdraw to between the lines (below), and Brentford became restricted to their defensive half for lengthier periods. United's increased success in circulating the ball around Brentford's midfield three led to them finding spaces through the inside channels, which was complemented by Fred, McTominay, Dalot and Fernandes linking into those making forward runs. Regardless of that success, they finished with a 3-5-2.