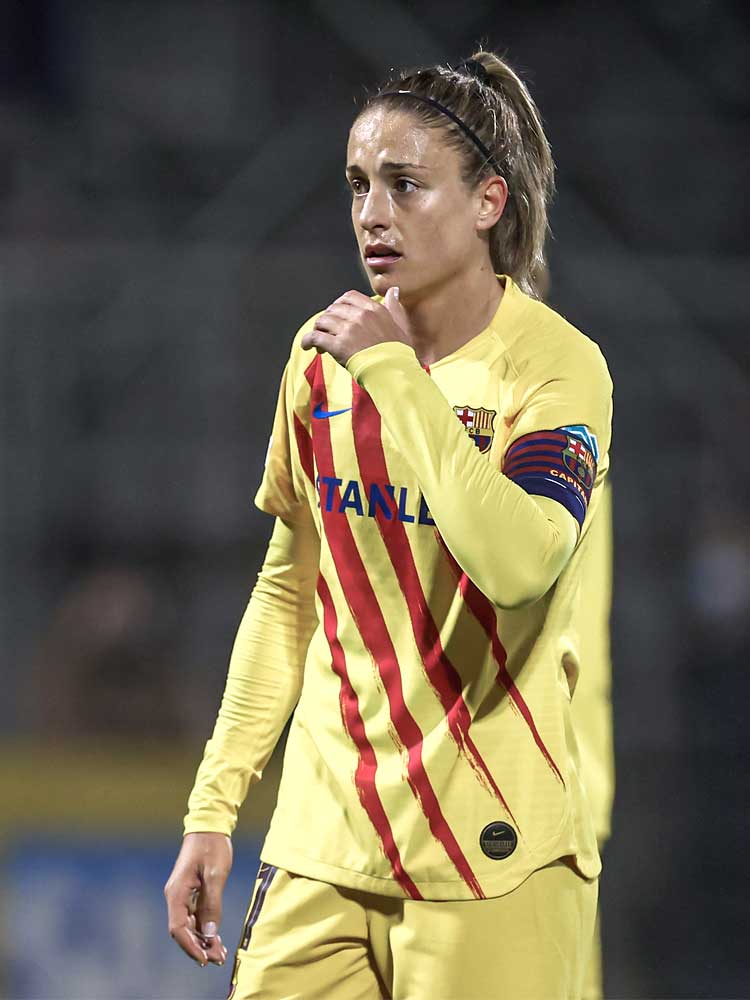 Profile
So impressive was Alexia Putellas' 2021 that she followed winning the revered Ballon d’Or by also being crowned the FIFA best women's player, when, by way of comparison, Lionel Messi won the men's Ballon d’Or, and Robert Lewandowski the men's best player. Beating competition from Sam Kerr and her Barcelona teammate Jennifer Hermoso, and aged 27 when her abilities were recognised for the second time in January 2022, she is unquestionably a player at her peak.

"This is not the product of months or days, it is the work of many years; 2021 was perfect and we hope 2022 will be the same," Putellas said. "Barça have put together an incredible project and is working hard to keep it that way for many years to come."

Tactical analysis
Putellas plays as a left-sided attacking midfielder for both Barcelona and Spain, but also does much of her best work in what would normally be considered the number 10's position. From behind her team's attacking line, she is calm and confident in possession, and both creates numerous chances and gets into positions to score.

She typically receives the ball with her back to goal and has the ability to turn quickly and play forwards, often acting as the link between defence and attack, and looking to move play into attacking areas as quickly as possible. She reads the game exceptionally well and scans for space before receiving the ball, contributing to her maintaining possession and fluidly connecting with teammates – an ability that means she can exploit space beyond the opposition’s defensive line by playing over or through them before they are set.

Putellas also willingly receives passes on her back foot, with an open body position that allows her to see across the pitch as well as the teammate who is passing the ball and further forward passing options. She is creative with her positioning and offers her teammates a range of options when building play; depending on the context of the game and the shape of her team, she is also happy either to come short to receive the ball, attracting opponents into deeper positions, or to move from the outside to the inside channel to receive between the lines (below).

She has exceptional technical ability, and is precise with her passing, showing incredible detail when connecting play with teammates. Swiftly moving the ball from her left foot to her right, Putellas is able to shift her body weight and deceive her opponent to create space to release it. She is able to generate significant power with little backlift, and uses that ability to deliver crosses into the penalty area, when she favours aiming into the space between the opposition’s central defenders and goalkeeper, forcing them to make a decision over who should clear the ball.

She also has good dribbling ability, and likes to move infield to affect play in central territory before attempting to play a penetrative pass for a teammate running in behind. When she plays through balls she does so with precision, and often times her release perfectly to find her teammate, having spotted a pass that many others would not.

Putellas, similarly, relishes one-on-ones, and when there are no clear passing lines will aggressively drive at her direct opponent. She is able to adapt her speed and direction quickly, helping her to evade defenders, and she uses the momentum of her opponents against them, moving the ball from side to side to unbalance them before advancing into space. When manoeuvring past an opponent in that way she uses her physical potential to hold off her opponent and to keep her body between the defender and ball. By lengthening her stride and then using her arms to generate power, she can then drive into space at speed, and potentially create goalscoring opportunities on the counter.

Complementing being a playmaker, Putellas also provides a threat on goal. Many of her finishes come from the edge of the 18-yard box following a cut-back (above); she takes advantage of teammates moving towards goal by holding her run and then finding space on the edge of the area, and she takes her shots early to limit defenders' time to react.

When she is required to defend Putellas works incredibly hard (below) to help her team quickly assume their defensive shape. If in a central role she works to delay potential counters by forcing her opponent backwards or sideways, and is happy to engage her opponent in an individual duel if they present opportunities for her to do so – perhaps via with a poor touch.

She is among the very best in the world, but there naturally remain weaknesses in her game. She sometimes prematurely engages in tackles, and therefore connects with the legs of her opponent before the ball, conceding a foul. She slso occasionally overhits forward passes targeting the space in behind defences, especially when doing so from a deeper position.

Role at Barcelona
A Barcelona player since 2012, Putellas has most often played as the left-sided attacking midfielder in their 4-3-3, but spends a lot of time in the centre of the pitch, and because of her excellent passing ability and in-game decision making has increasingly been asked to play as a central midfielder. A team populated with world-class players, Putellas and her Barça teammates have a clear understanding of their roles and responsibilities.

When Barça have possession Putellas will position herself between the lines. She is incredibly intelligent with her positioning, and will seek to maintain clear passing lines with her fellow midfielders to progress the ball through central territory. When the ball is with their defensive midfielder Patricia Guijarro, Putellas moves into the inside channel, often maintaining a high starting position – giving her the opportunity to receive on the half-turn and to play forwards quickly, and also to keep play in the centre of the pitch. She is so effective with the ball that she is always asked to play through the centre, and to play into their centre-forward Asisat Oshoala.

Putellas commands the centre of the pitch, and has the ability to change the tempo of play at lightning speed via a quick pass into the forward movements of her teammates. Her understanding with fellow midfielder Aitana Bonmatí (below) has proved crucial. She and Putellas consider one another’s movements before deciding whether to join attacks; it is most commonly Bonmati who drives forwards, and Putellas who maintains balance and plays line-breaking passes. It is also the detail involved in those forward passes that separates Putellas from so many of her peers.

When Barça apply a high press, Putellas is vital in the second line of that press. She screens the opposition’s defensive midfielder, delaying her movements, and timing her run to step across the relevant passing line to intercept. She then takes advantage of the opposition being out of shape to launch an attack at pace.

Putellas is undeniably one of the world’s best players; her combination of technical ability and tactical awareness is almost unrivalled. Her scanning, decision-making, passing, and ability to change, in an instant, the tempo of play makes her absolutely devastating. Few others can create as much through the centre of the pitch, and that is why she is so valuable.