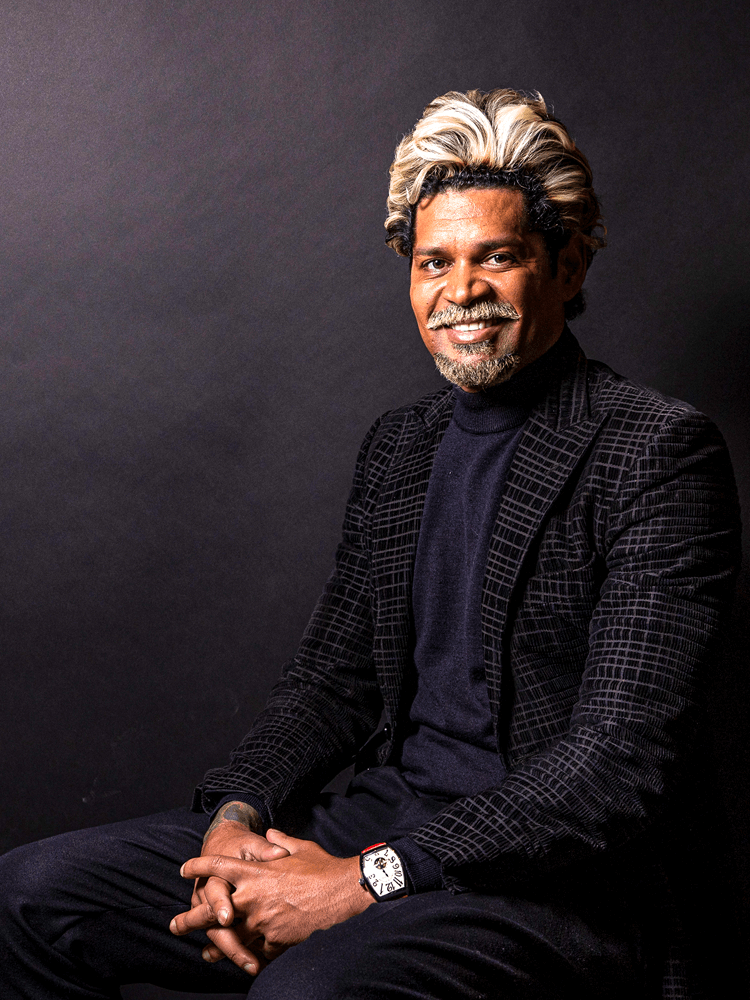 When I first started working as a coach, I think a lot of people were in shock.

I suppose they were surprised because I have this sort of cheekiness about me. The world of football is a conservative one, and I am irreverent.

I have never, and nor will I ever, accept that I have to put my style to one side because of some so-called norm. I have always been extremely professional and honest. It’s the only thing that matters.

When I was a player, I turned down a lot of teams that wanted me to change the way I look. What does the way I look matter if I am delivering at work?

To keep myself truthful to the way I look became a matter of resilience. I don’t judge anyone by their looks. I judge by content.

I was born in Mozambique and emigrated to Portugal as a child. We went after colonisation and the civil war in the country where I was born. It was a traumatic experience. Half of my family migrated; the other half stayed in Africa.

It was the mid-seventies and it wasn’t easy to integrate into Portuguese society. We used to live in the so-called bairros de lata – the shanty towns – of Lisbon. The underworld. I am a product of the streets, and I am very proud of it.

Football was in our neighbourhood; in the streets. In my head I was the world’s greatest. I dreamed about making a living out of football. It’s gratifying to look back and realise that the dream didn’t just stay in my head.

My professional career lasted some 20 years. A lifetime of dedication to my profession. Obviously, I went through different stages along the way.

"every coach i played for left a mark on me, one way or another"

I matured as a player and, of course, as an individual. With every step I took, I would acquire more knowledge about the game, and also about life itself. This background undoubtedly adds to my job as a coach.

I started thinking about becoming a coach when my career on the pitch was coming to an end. When I got an offer from Los Angeles Galaxy, I thought it would be the perfect destination to finish off the learning process on the pitch – little by little, moving into my new role.

I was aware that my knowledge as an athlete didn’t guarantee that I would be a successful coach. How many great players have failed as coaches? You have to study in order to make the transition from one role to the other.

At that point, with LA Galaxy (above), I thought I was ready. I thought I had the knowledge to start making that transition. I also felt that becoming a coach was a way of paying back what football had given me.

I always placed a high value on the positive influences in life. You need to have solid foundations in order to grow – to develop and to empathise. My grandparents and my parents have always been the foundation of what I am. They fought so I could have a better way of life.

After that, through football, I also got to know leaders who ended up being part of those foundations and helped me continue to develop. I learned from every coach I played for. In one way or another, they all left a mark on me.

"i was with juan manuel lillo, a real thinker about the game"

It wouldn’t be fair to pick one coach over another as a greater influence. I am a product of both the good and bad experiences I had with each one of them.

I was fortunate to come from the Sporting Lisbon academy. They have an exemplary training method, because they understand football as something that goes beyond the game itself.

Education is the foundation for everything. A more intelligent player will understand all the variables of the game better. What I learned then will stay with me forever.

As a professional player, I had the privilege of playing under outstanding people. At Estrela da Amadora, my coaches were Manuel Fernandes – his assistant was José Mourinho – João Alves and Joaquim Teixeira. At Benfica, I worked with Jesualdo Ferreira (above), a man with extraordinary tactical knowledge, and also with Toni.

I mean people like Carlos Queiroz, Nelo Vingada and, again, Jesualdo Ferreira. These are influential people with their own methods of training and teaching. It’s no coincidence that a lot of players from that time have developed into successful coaches.

My experiences playing abroad were not any less nurturing. At Real Oviedo, I was with Juan Manuel Lillo, a real thinker when it comes to the game. There have been so many people who have influenced me. I could be here giving you names all day, and I’d probably still miss some out.

I worked with Óscar Tabárez, a man who had enormous vision. With Bobby Robson, a true gentleman with leadership qualities like few others. In Britain, I’ll mention Gérard Houllier, who I think is responsible for the transformation at Liverpool, the fruits of which the club is reaping now.

I’d like to take this opportunity to talk about my experience in England. I greatly enjoyed playing in English football. I think my characteristics were a perfect fit for the Premier League in those days.

I experienced something that is very unusual when I lived there – playing for both rival teams in the city of Liverpool. These are clubs with more than 100 years of history, and not many have had the opportunity to play for both Liverpool and Everton (above). To this day, I am still treated with respect by fans of both.

Everton paved the way for me to play in England. All professional players dream of playing in the Premier League. In those days, Everton’s structure was very British. Unfortunately, they were going through some financial trouble, and on the pitch they were in a relegation battle. It was then that an offer from Liverpool came my way.

I had an open conversation with the Everton directors. The team received financial compensation for my transfer. Liverpool offered me the opportunity to play in the Champions League and to compete for silverware.

"i had been unfairly penalised for doping. but i wasn't guilty"

These were new dreams turned into reality in my life. I was honest and straightforward with both clubs. That is why my reputation remains untarnished with both the red and blue halves of the city.

Jurgen Klopp’s success is due in large part to his capacity to understand and value Gérard Houllier’s legacy. It was Houllier who started the transformation, by professionalising every department at the club.

Living through that time at Liverpool (below) was a great learning experience for me and for many of my teammates. Some of them – like Steven Gerrard – ended up being coaches, too.

I have no doubt that one day he will be in charge of Liverpool. The same way I do, he also carries the legacy of what he learned from working with Gérard Houllier (below).

When I talk about England, I have to emphasise what I went through at Middlesbrough. I had been unfairly penalised for doping. Later it was proved through analysis at the UEFA labs in Germany that I wasn’t guilty.

It took a whole year for 'justice' to be done. Although I feel that it wasn't justice entirely, because I had to stop playing for a year when I wasn’t guilty of what I was being accused of. The price I had to pay as an athlete, and the harm to my reputation, as a person, are irreparable.

"my reputation is untarnished"

If there was a time when I thought about quitting football altogether, it was then. But I prefer to focus on the good side of life. I will be forever grateful for the support that the Middlesbrough chairman, Steve Gibson, and the fans gave me.

For my first game back on the pitch, there were 40,000 fans cheering on my return. That was one of the highlights of my career.

After all of these experiences around the world I went back to Portugal, to start my career as a coach. In 2013, I accepted the challenge to coach Olhanense, a club that had already opened the way into coaching for other former players such as Sérgio Conceição and Jorge Costa.

It was an ambitious project. It was more than just football. Olhanense is in the Algarve, a tourist area in Portugal. I always thought it was a waste that football was not part of the tourist offer in the region.

With the help of an investor, we tried to join up the dots. To fit the financial and football pieces together, and bring tourists to the stadium – and, that way, to turn Olhanense into a domestic powerhouse.

It was a great project. Unfortunately, the economic crisis and some disagreements with the board set the idea adrift.

My most recent experience as a coach was with Mozambique’s national team. That was another job that went beyond football. I wanted to pay the country back for all that it had given me. I was their national coach for three and a half years, and I was also overseeing all of the youth teams.

Typically, the only thing that counts in football is results, and results are obviously important. But there is a reason for the results. Behind every victory there is a working methodology – an organisation with structure. I am very proud to have contributed to the development of football in the country of my birth.

All of these experiences make me very grateful to the sport and to all the people I have met on my journey. I consider myself up to any challenge.

It may be a club or a national side. Over time, I have been preparing for whatever comes my way.

When a new opportunity comes along, I won’t be taken by surprise. My reputation is untarnished, and I have a lot in me to turn my new dreams into reality.