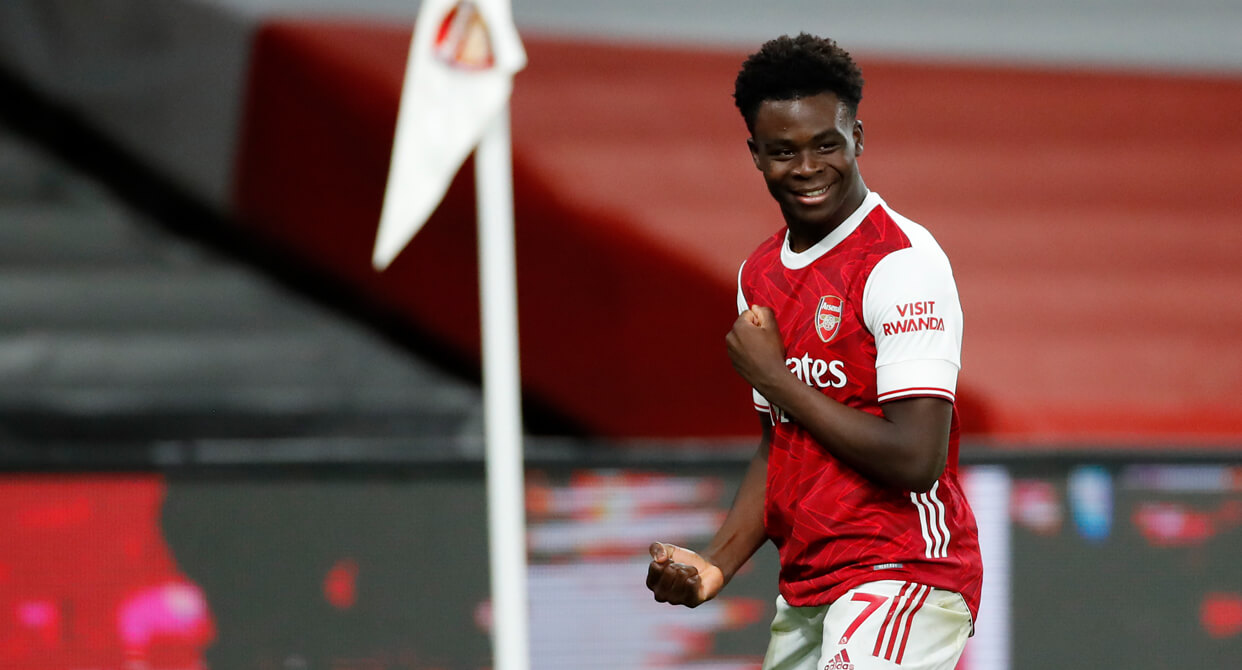 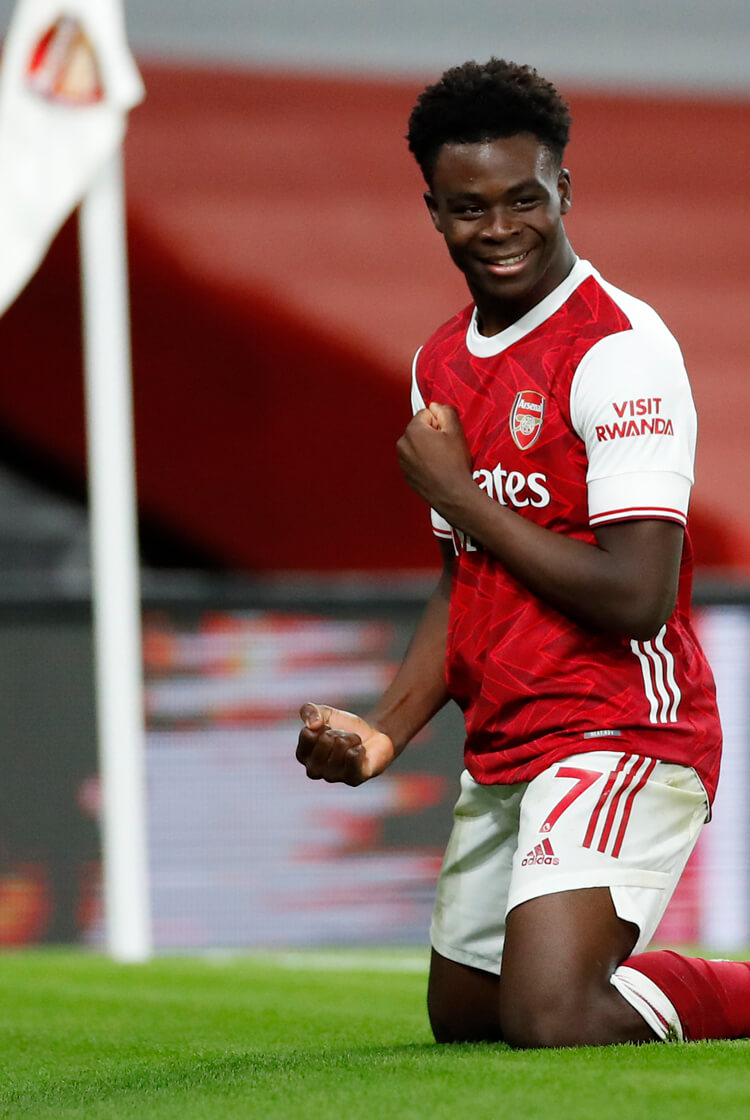 A young Arsenal team missing centre-backs David Luiz and Gabriel Magalhães through Covid protocol eased the pressure on manager Mikel Arteta with an energetic and incisive display against Frank Lampard's disappointing Chelsea. The home team were more impressive from the start, and took a deserved lead through Alexandre Lacazette's penalty after Reece James had bundled Kieran Tierney over in the area. Granit Xhaka doubled Arsenal's advantage with a well-taken free-kick shortly before half-time, with the vibrant Bukayo Saka adding a third with a cross-shot early in the second half. The game looked over by the time Tammy Abraham chested in a cross from substitute Callum Hudson-Odoi with five minutes remaining, although there was still time for Jorginho to have a penalty saved by Bernd Leno. Defeat was Chelsea's third consecutive away reversal, but the three points came as welcome relief to Arsenal, who hadn't won a game beyond the Europa League since October. 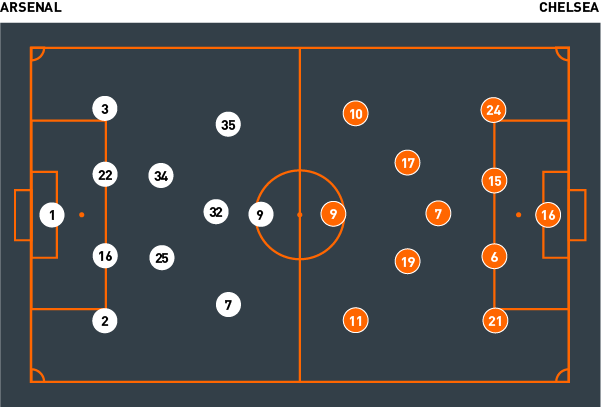 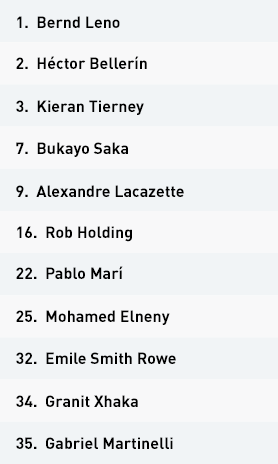 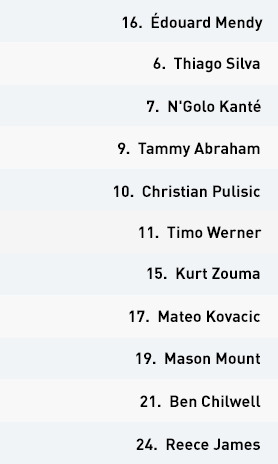 Mikel Arteta set his Arsenal team up in a 4-2-3-1 formation, with the youthful trio of Bukayo Saka, Emile Smith Rowe and Gabriel Martinelli supporting lone forward Alexandre Lacazette. The hosts looked to be patient during their build-up play in the first half, trying to find ways through Chelsea’s 4-1-4-1 out-of-possession shape.

The visitors tended to use Tammy Abraham to close down the ball-carrying Arsenal centre-back, but he was often easily bypassed with a simple switch of possession from one centre-back to another. With the midfields essentially matched up – N’Golo Kanté, Mason Mount and Mateo Kovacic occupied Smith Rowe, Mohamed Elneny and Granit Xhaka – any attempt by Chelsea to push a midfielder forward to support Abraham in the press led to an underload in central areas. They countered that by moving Timo Werner or Christian Pulisic from their wide area and Kanté on to the free midfielder, leaving Smith Rowe free to receive if Arsenal could find him through a very narrow passing line.

Arsenal responded with variations in their movement; Smith Rowe roamed across the pitch, while Saka often dropped into the half-space from his starting position wide on either wing to receive possession, with neither Chelsea full-back keen to follow him. The variety of those movements forced Chelsea to pass players on between them in order to avoid an imbalance in their structure, which allowed Arsenal to control possession more easily.


There was a clear increase in energy from Arsenal's attack when compared with recent games, the younger players providing more of a risk-taking dynamic that allowed them to create early problems. They often looked to switch play to their wide attacker, and to pair that pass with the overlapping run of a full-back to create a two-on-one – a simple approach that caused Chelsea problems on both wings in the first half.

Arsenal's wide attackers often played inside, forming more of a narrow three with Smith Rowe that then created space outside for their full-backs to advance. Elneny and Xhaka tended to sit deeper, although Xhaka did occasionally make forward blindside runs when Saka dropped to occupy his direct opponent. That more adventurous approach created more ways in which Arsenal could break opposing midfield lines, which was evident in the build-up to their third goal.

While they continued to be patient during their build-up, the hosts were aware of the speed they had out wide and were not afraid to draw Chelsea into a high press before playing an early ball in behind for their wingers to chase. Their possession dropped in the second half, as Chelsea looked to gain control of play and to find a response, but Arsenal saw out victory to claim a hugely important three points.

Frank Lampard sent his Chelsea team out in a 4-3-3 formation in possession, with Christian Pulisic, Tammy Abraham and Timo Werner playing in a front three in front of N’Golo Kanté, Mason Mount and Mateo Kovacic.

Hosts Arsenal looked to disrupt the visitors’ build-up in the early stages. Their central striker Alexandre Lacazette closed down the ball-carrying centre-back to force play one way, while the ball-side wide attacker would try to screen the pass into Chelsea's full-backs. Emile Smith Rowe occupied Kanté, and Mohamed Elneny and Granit Xhaka picked up Mount and Kovacic.

As the ball moved to one side, Arsenal's players would lock on tight to their opponents and try to compress the space in which they could play, with the intention of forcing mistakes and turnovers. Chelsea had significant difficulty with that, and often lost possession in their own half as a result. The exuberance of Arsenal’s press carried slightly more risk than a more controlled press, but its intensity caused Chelsea problems. A better technical side may have been able to exploit the gaps within Arsenal's structure, but Chelsea were not able to do so.

Arsenal’s out-of-possession structure protected central areas well and put Chelsea under intense pressure every time they did try to play inside – Kanté in particular had trouble receiving and advancing play under pressure. Instead, Chelsea looked to play directly to Abraham as their primary outlet, to either secure possession and bring others into play or to flick on with a header – but neither approach provided any real danger, with Abraham struggling to make an impact.


The changes made by Frank Lampard at half-time made a big difference to their quality in possession, with the more technically capable Jorginho taking on the deeper midfield role and Callum Hudson-Odoi’s introduction enabling Pulisic to move to the left in place of the disappointing Werner.

Pulisic and Hudson-Odoi offered a major one-on-one threat for Chelsea on both wings, with the additional threat of attacking full-backs to assist with wide attacks. Having Jorginho behind the ball, while keeping Kanté on the pitch, provided reasonable security to allow their full-backs and also Mount to advance more freely. The closeness of Pulisic and Mount when the former moved in off the left wing offered potential combination opportunities, but the pair often seemed to get in each other’s way.

Attacks in wide areas led to a number of crossing opportunities, most effectively after Hudson-Odoi had shifted the ball beyond his opponent and delivered quickly into the penalty area – as was seen for Abraham’s late consolation strike.

Although the second-half improvement in build-up will have pleased Lampard, his team still struggled to break midfield lines and to create good-quality goalscoring opportunities. With so much attacking talent available, that is an area in which they should really be thriving.