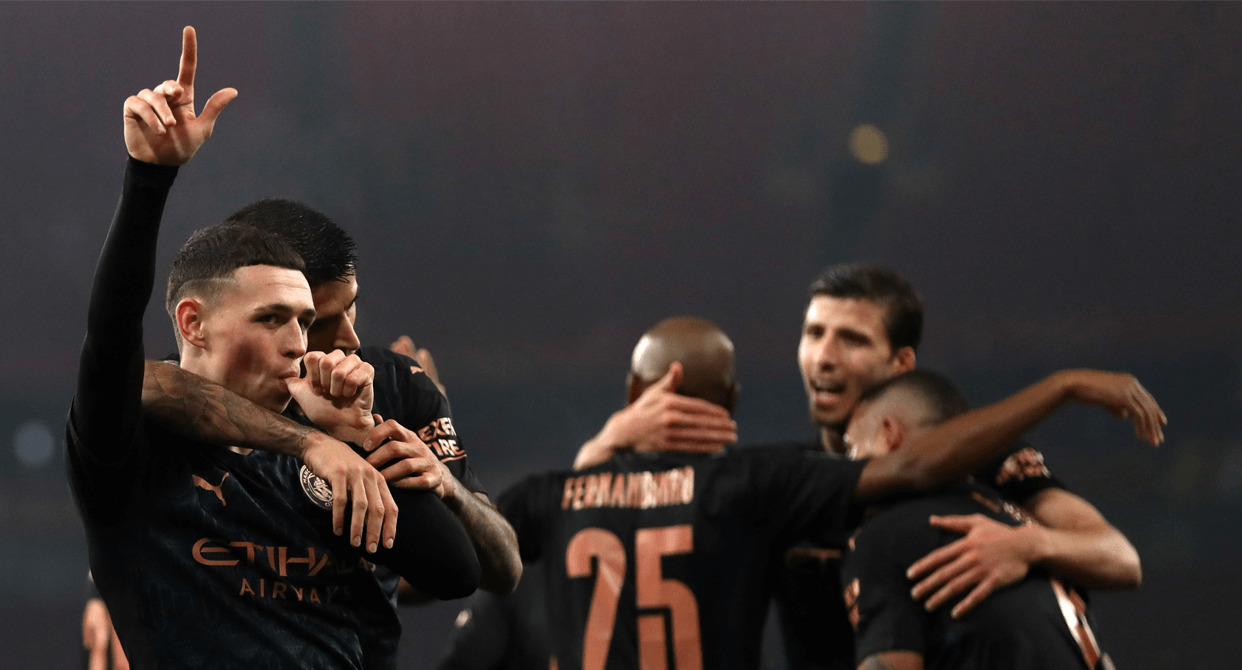 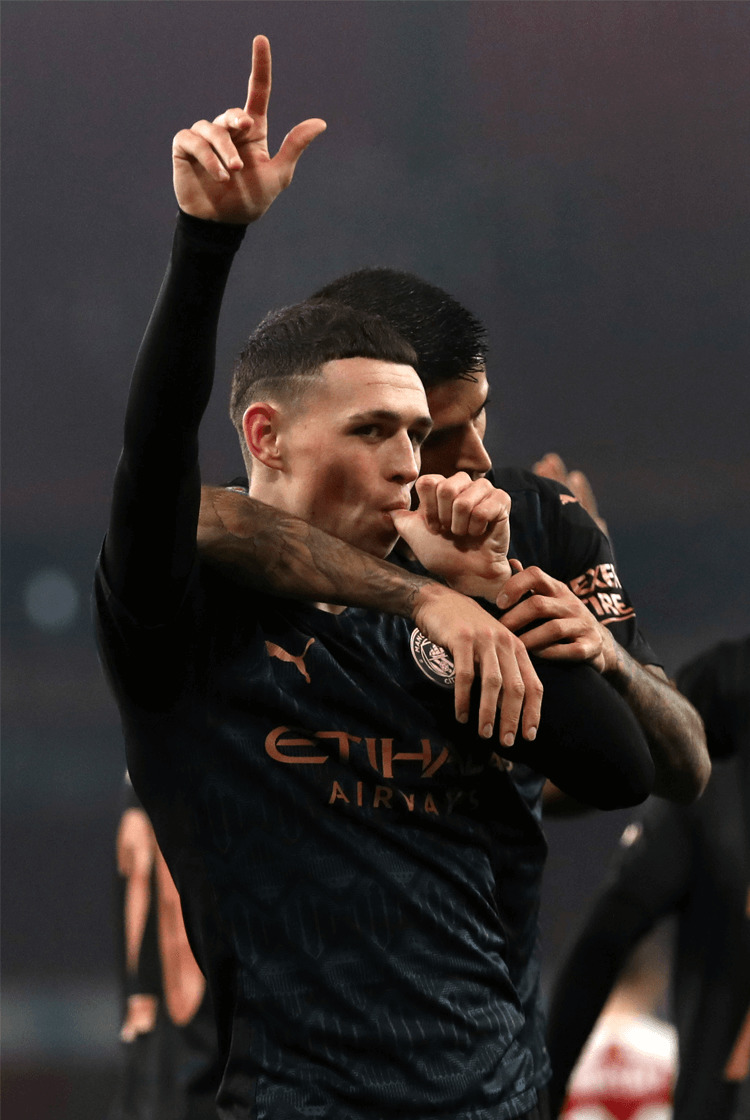 Holders Manchester City eased into the semi finals of the League Cup by winning at the Emirates Stadium as Arsenal continued to struggle. Gabriel Jesus scored inside the opening three minutes, and though Alexandre Lacazette's header ensured Pep Guardiola's team was level at half-time with that of his former assistant Mikel Arteta, three goals during the second half followed from Riyad Mahrez, Phil Foden and Aymeric Laporte. "It's a really painful moment again," Arteta said. "We started the game conceding really early, a really soft goal. But the players reacted to be fair and we started to grow as the game was moving forward. It's a really hard result to take. But as well we have to look at things that can help us for the future, and I have to say for the young players in a really difficult scenario they did really well." Guardiola said: "They didn't create much but we weren't fluid. We changed it half-time and put one more player in the position we needed and we were much better. We are going to play to reach the final four years in a row." 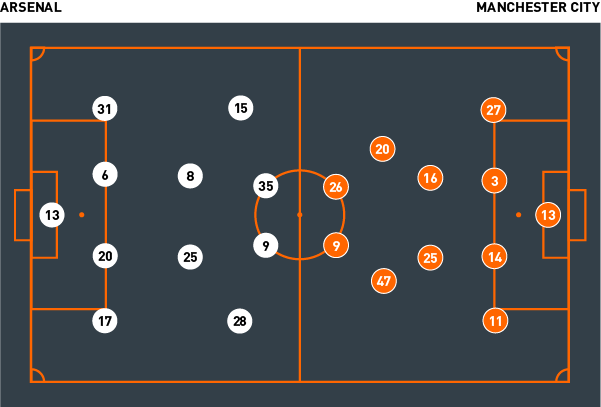 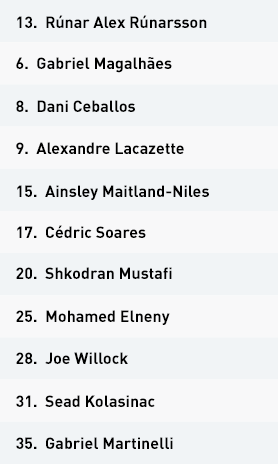 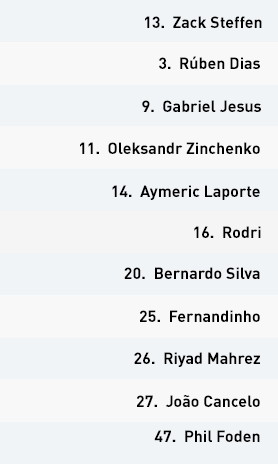 Arsenal were organised by their manager Mikel Arteta into a 4-2-4 formation in which Dani Ceballos and Mohamed Elneny featured in central midfield. Their visitors, Manchester City, defended with a 4-4-2 and a front two of Riyad Mahrez and Gabriel Jesus.

Elneny regularly withdrew into central defence, to between Shkodran Mustafi and Gabriel Magalhães, to create a three-on-two in the first phase of their attempts to build possession, inviting Cédric Soares and Sead Kolasinac to advance from full-back, and therefore increased movement from Arsenal's front four. Alexandre Lacazette, Gabriel Martinelli and Joe Willock offered contrasting movements that involved Lacazette withdrawing into midfield to draw Aymeric Laporte or Rúben Dias out of position and then target the spaces behind City's defence.

In an attempt to preserve their back four, instead of a defender following Lacazette, City sought to apply a press that involved Phil Foden and Bernardo Silva advancing to alongside Jesus and Mahrez; when Elneny moved into his deeper position, Rodri and Fernandinho prioritised Ceballos and Lacazette. If Elneny instead remained in central midfield, Lacazette's movements potentially created a three-on-two in midfield, so Jesus instead resisted their press to take Elneny. Arsenal's front four was also encouraged to be fluid and play with variety in an attempt to disorganise City's defence; Ainsley Maitland-Niles' freedom meant him often moving into other areas and becoming the free player they sought.


During the second half Ceballos was instructed to adopt a position as a false full-back when play was being built, again encouraging their starting full-backs to advance, but also stretching the opponent on that side of the pitch and ensuring that that opponent was regularly beaten. In the final third combinations were prioritised in an attempt to progress through City's defensive line; the relevant full-back, wide attacker, central midfielder and striker combined to offer penetrative runs and support to move beyond it.

Opportunities to advance with width and then cross or shoot from a difficult angle, or to play infield and create further combinations and potential goalscoring chances in a central area, occasionally followed. Those chances were rarely of a good quality, however; their only goal came during a messy moment of transition, and even then partly because Laporte's poor positioning gave Lacazette the time and space he needed to direct his header towards goal.

Pep Guardiola's Manchester City adopted a 4-2-2-2 formation. Fernandinho and Rodri formed the first two at the base of their midfield, Phil Foden and Bernardo Silva the second, and Riyad Mahrez and Gabriel Jesus were paired up front. Their hosts, Arsenal, defended with a 5-2-3 led by Joe Willock, Alexandre Lacazatte and Gabriel Martinelli.

Willock and Martinelli pressed the outside shoulder of City's central defenders to restrict access to City's full-backs, and Lacazette prioritised Rodri but, because of Fernandinho's presence alongside Rodri, Dani Ceballos was instructed to advance to take the Brazilian. Foden and Silva worked to create an overload, when the wide positions taken by Mahrez and Jesus discouraged Arsenal's wider central defenders from moving with them; Gabriel Magalhães regardless remained central, so their wide attackers responded by withdrawing into midfield, in turn making it easier for City to access their full-backs.

To negate the significant attacking potential offered by Foden and Silva in the half-spaces, Arsenal reorganised from their 5-2-3 into a less aggressive 5-4-1. City regardless continued to find their full-backs; Oleksandr Zinchenko twice received possession in the build-up to their opening goal, on the second occasion playing the cross from which Jesus scored.

Throughout the first half City were consistently capable of finding a free player when possession was being built. Lacazette was stretched by both Rúben Dias and Aymeric Laporte until they found the feet of either Rodri, Fernandinho, or the full-backs outside of them. Rodri and Fernandinho worked to draw Mohamed Elneny and Ceballos towards them and then to combine around them to access Foden or Silva.


Arsenal's wide midfielders were often caught between the relevant attacking midfielder and full-back, contributing to City progressing throgh midfield. Foden regularly received between the lines on the half-turn, from where he continued to attack.

With City's full-backs used as free players and attempting to draw the opposing wing-back towards them, the forward and attacking midfielder in front of them had spaces to attack into or to offer an infield passing option in a combination. Arsenal later anticipated where City were attempting to play to, so there were occasions when they succeeded in turning over possession when City as attempting diagonal passes towards their full-backs. Their visitors were quick in transitions, however, and therefore often recovered it.

In an attempt to access the spaces behind Arsenal's defence, Guardiola's team offered contrasting movements between the relevant forward and attacking midfielder, and floated, crossfield passes in front of the advancing far-side attacker or full-back. They regularly progressed through the first two lines of Arsenal's structure, but found it harder to beat Arsenal's defence; despite scoring four goals, they struggled to create many quality chances. Two came from set-pieces, another from a counter-attack, and another via an effective build-up.