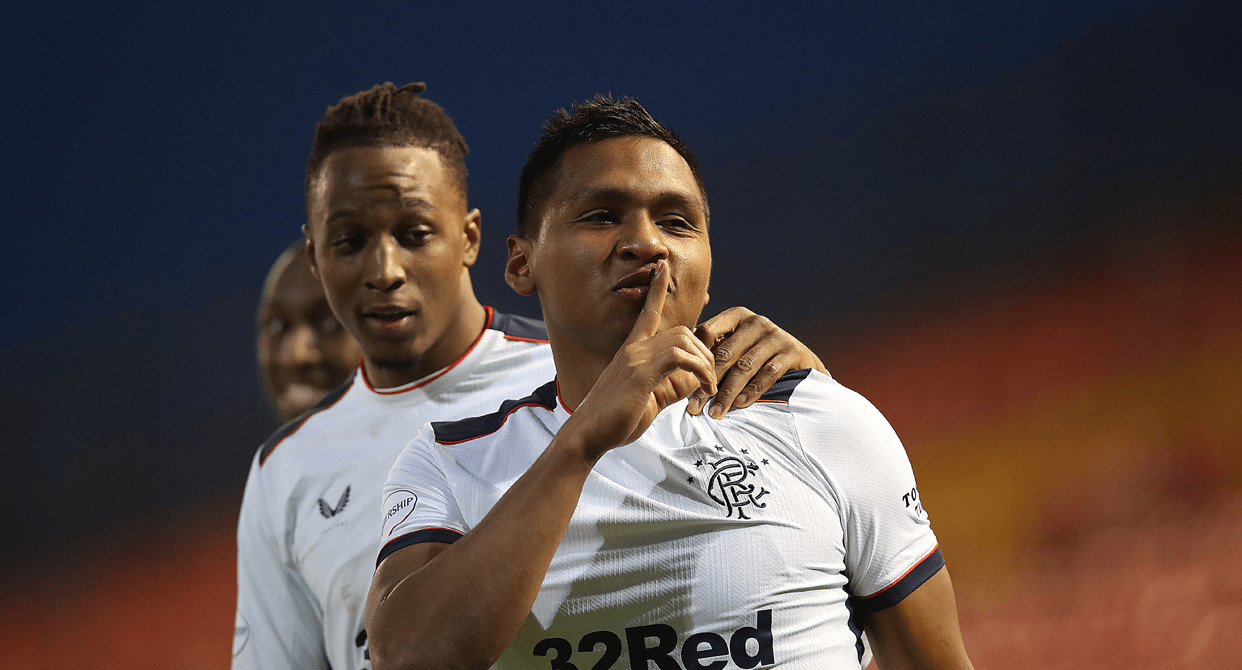 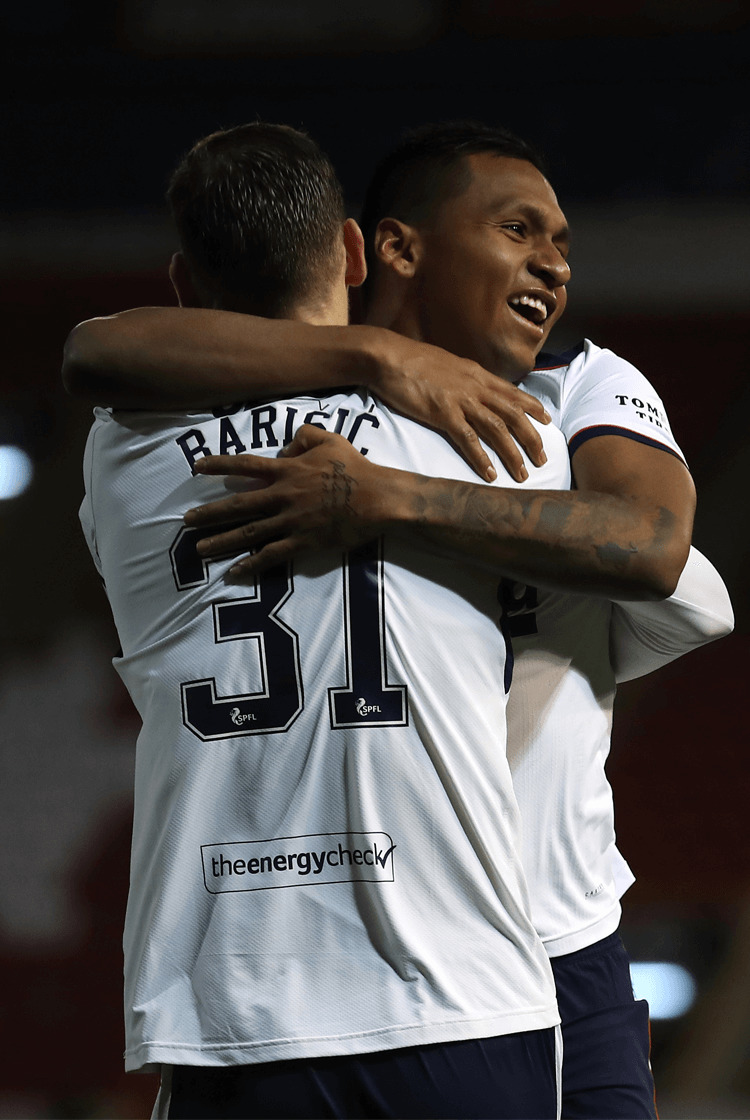 Rangers moved 22 points clear at the top of the Scottish Premiership after two goals from Alfredo Morelos secured victory away at Aberdeen's 10 men. Their 15th successive league victory brought them a step closer to their first Premiership title since 2011, and equally significantly to denying Celtic a 10th straight year as champions. Ryan Hedges was sent off in the first half, conceding the penalty from which James Tavernier missed, but Morelos later gave them the lead, and doubled that lead after half-time. Aberdeen substitute Matty Kennedy later scored for them, but the second goal they required to extend their six-match unbeaten run eluded them. "We were excellent up until 2-0," said Rangers' manager Steven Gerrard. "At 2-0, we changed our mentality and mindset. We were making passes and decisions we didn't need to make. I'm looking for more leadership on the pitch." His opposite number, Derek McInnes, said: "The last team you want to go a man down to is Rangers. The players were excellent." 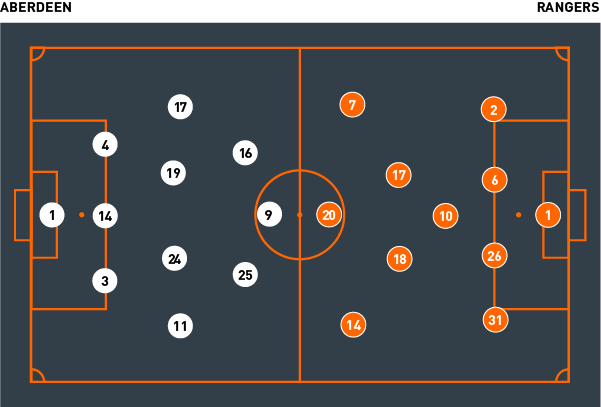 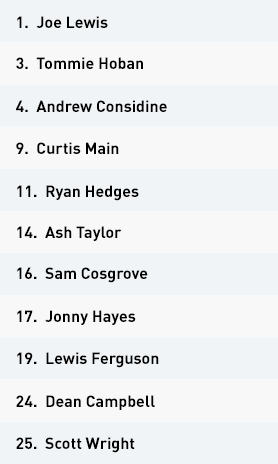 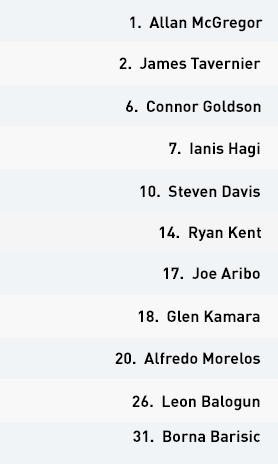 Derek McInnes set Aberdeen up in a 3-4-3 formation built on the back three provided by Tommie Hoban, Ash Taylor and Andrew Considine. Their visitors, Rangers, remained in their favoured 4-3-3.

Aberdeen sought to play directly from their goalkeeper Joe Lewis, who often targeted Sam Cosgrove, because of the striker's ability to compete for aerial balls and then to either bring possession under control or to flick it on. Scott Wright and Curtis Main made runs in behind, and the relevant central midfielder and ballside wing-back – or wide attacker, if the wing-back was instead running in behind – would adopt positions close to those aerial balls and remain braced to compete for second balls.

They also favoured attempting to build to towards the right, from where they sought to advance in behind and deliver balls into the penalty area. Wright's dribbling ability offered them potential; if necessary, a wing-back supported on the outside, and Lewis Ferguson and Dean Campbell remained behind the ball to offer both an option to recycle possession and security against counters.


Ryan Hedges' red card meant that they instead used a 3-4-2 when they had possession, via Wright moving to right wing-back, and Main and Cosgrove forming their front two. Towards the end of the first half, Main, who had been booked, was replaced by Shay Logan, who in turn played at right wing-back, behind the front two of Cosgrove and Wright.

McInnes' team were attempting to remain in contention for at least a point, and to then capitalise on the rare goalscoring chances that came their way. Long passes to Cosgrove were complemented by runs in behind from Wright, who sought his flick-ons; Cosgrove was also content to draw fouls and win set-pieces. Alternative approaches to instead attack on the counter meant that they achieved little more than reaching Rangers' defenders and inviting the next attack against them.

A combination of the two approaches contributed to them reducing the two-goal advantage Rangers built, but too little was created for them to secure a draw.

Rangers were organised by their manager Steven Gerrard into a 4-3-3 formation led by the front three of Ryan Kent, Ianis Hagi and Alfredo Morelos. Their hosts, Aberdeen, defended with a 3-4-3.

The defensive approach of Derek McInnes' team was highly man-oriented, and involved them attempting to press Rangers high up the pitch. Sam Cosgrove and Scott Wright, from their front three, led that press by prioritising closing down central defenders Connor Goldson and Leon Balogun, and Curtis Main took Steven Davis to negate the three-on-two that otherwise would have existed against them in midfield.

Rangers struggled to play through Davis, because of the pressure that was being applied; they were instead forced to spread possession wide, where Aderdeen applied even further pressure. Kent and Hagi therefore moved to towards possession to test Tommie Hoban and Andrew Considine, but both proved willing to follow them as far as necessary. That they were so man-oriented meant that spaces were created, and that their defensive line became imbalanced, encouraging Rangers to make forward runs from midfield.

Gerrard's team favoured the use of rotations, particularly towards the left, where Kent, Glen Kamara and Balogun combined to adopt positions that continued to test their opponents' willingness to follow them – and therefore leave spaces that could instead be played through. When Hagi and Kent withdrew into midfield, Morelos made diagonal runs in behind into the half-space vacated by the relevant central defender. By creating an, albeit brief, distance between he and Ash Taylor, as he did when scoring both of their goals, he succeeded in arriving to the ball first and creating a goalscoring opportunity either for himself or a teammate.


Rangers continued to use Aberdeen's defensive approach against them; movements drew their opponents out of position and combination play took advantage of the spaces that had been created, taking them in behind, as applied when the penalty wasted by James Tavernier was won. After Ryan Hedges was sent off for conceding that penalty, Aberdeen reorganised to adopt a 5-2-2, and thereafter regularly struggled.

They were no longer capable of pressuring both of Rangers' central defenders and Davis, establishing the three-on-two that meant the visitors regularly progressing past the first line of pressure. Behind that three-on-two a seven-on-seven existed, so Goldson or Balogun advanced to commit an opponent and free up someone else.

They regularly did so in the wider areas of the pitch and the half-spaces; if doing so wide, a triangle was formed to support underneath the ball and was complemented by a penetrative run. The seven points of attack that existed meant that a significant share of the remainder of the match unfolded in their attacking third. Aberdeen retreated to the point of using all nine outfield players there; play often resembled something witnessed on a training ground.

For all of their control, Rangers didn't succeed in creating numerous high quality chances. Aberdeen needed to both remain compact and then move out and be more aggressive if they were going to pursue a point; they regardless remained organised in defence, contributing to Rangers circulating possession in front of their shape as they looked to take it wide and therefore Aberdeen's tireless midfielders shuffling across to offer protection.