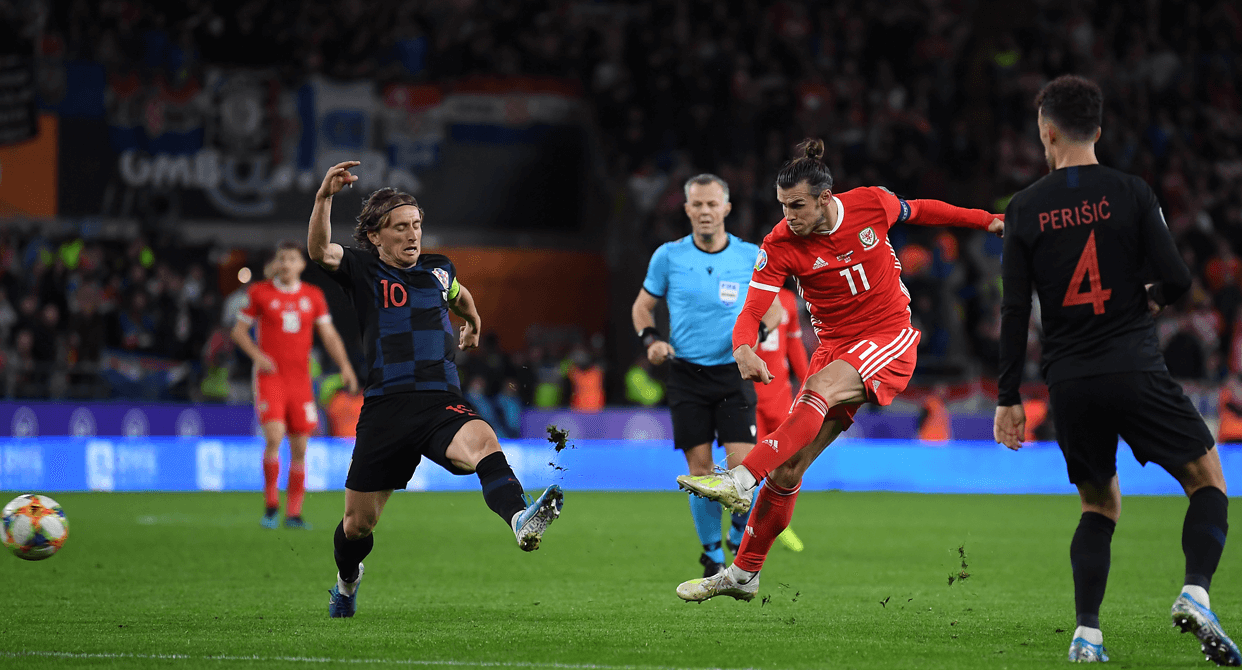 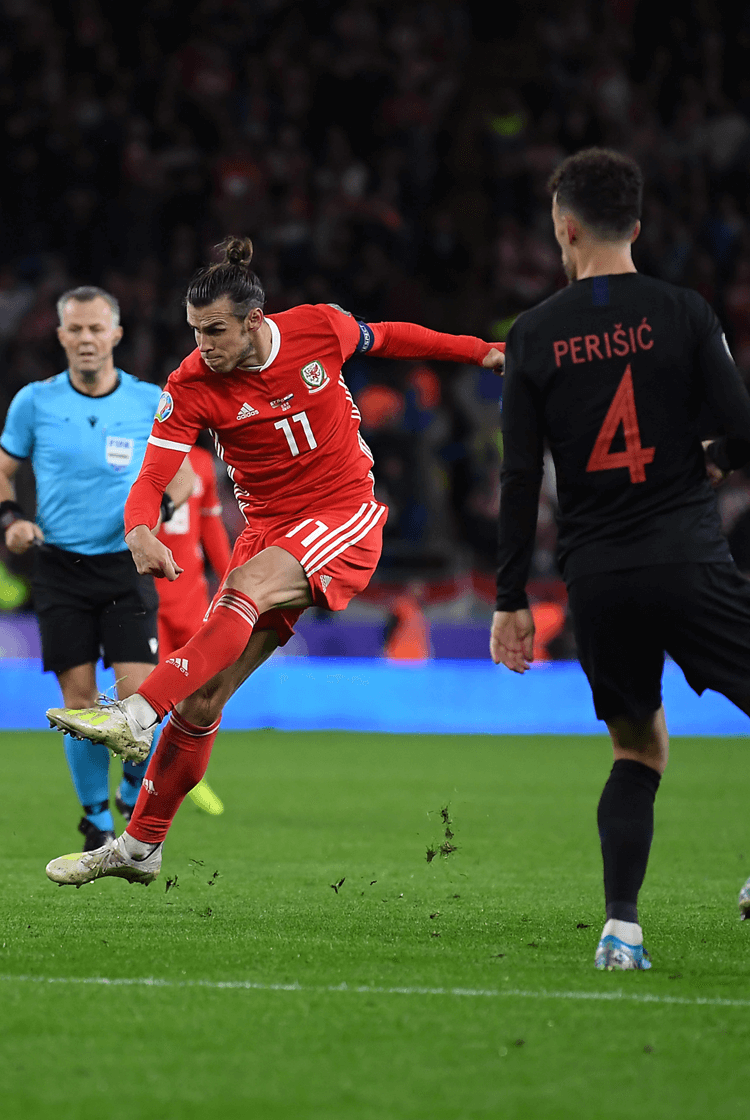 A Gareth Bale goal ensured Wales recovered from a goal down to secure a 1-1 draw at home to Croatia in their pursuit of qualification for Euro 2020. Ryan Giggs’ team were without the influential Aaron Ramsey, and fell behind when Nikola Vlasic scored in the ninth minute, but Bale’s fine finish on the stroke of half-time extended their eight-year unbeaten run at home in Euro qualifiers to a 10th match. They are now reliant on Slovakia dropping points in their remaining two fixtures, and must win both of theirs, in Azerbaijan and at home to Hungary. Ben Davies, who created Bale’s goal, became the 41st Wales international to reach 50 caps; Giggs will also have to prepare his team for their trip to Azerbaijan without Joe Allen, who is suspended after earning a late yellow card. 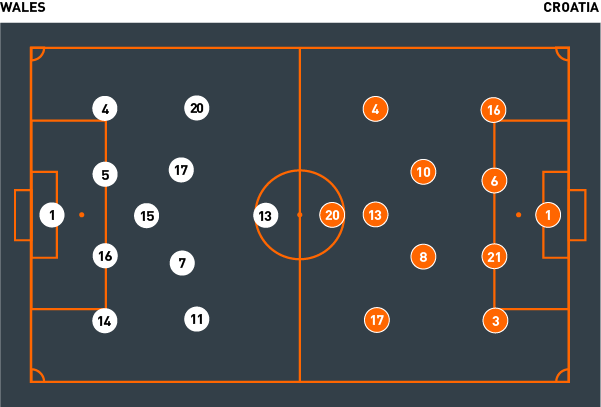 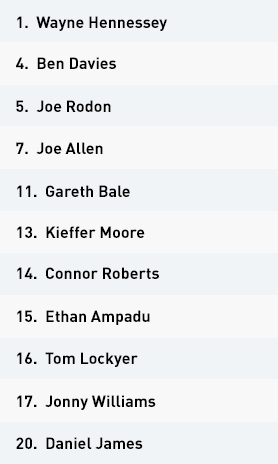 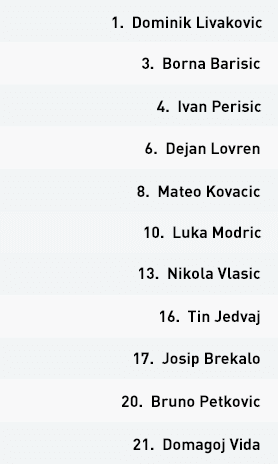 Wales manager Ryan Giggs organised his team into a 4-1-4-1 formation, and they began with an extremely disciplined mid-block. Central midfielders Joe Allen and Jonny Williams screened access into the visitors’ front line, and also individually covered Croatia’s double pivot. Their organised start was exploited, however, in the one early moment they committed numbers forward to support lone striker Kieffer Moore, when Croatia advanced after a regain and took the lead through Nikola Vlasic.

The hosts struggled against the visitors’ more effective left side – rotations in possession created spaces through the inside channel – but they eventually adjusted through Allen withdrawing alongside single pivot Ethan Ampadu. As the secondary forward when out of possession, Vlasic followed Allen, giving the hosts a chance to penetrate into Moore. Croatia’s double pivot focused on Williams, who advanced to play as a number 10, but couldn’t restrict possession into Moore, who drifted to the left as Gareth Bale operated between the lines from the right.

With Allen much deeper and Moore moving laterally around and away from the visiting central defenders, Wales often lacked options when getting beyond Croatia’s midfield – and, when going more direct, they often conceded possession. Athough the visitors temporarily returned to dictating play, pressure from Wales forced them into a deeper, unsettled defensive block – which contributed to Bale’s equalising goal on the stroke of half-time.

When Croatia’s central defenders drove forward in the second half, Moore was forced to track back; the visitors also built around the Wales block, drawing Bale and Daniel James deeper and thus limiting their ability to transition into attacks. Croatia also won possession back more quickly and in more advanced spaces; that they attempted to play around instead of through the Welsh defence, and often via crosses, gave the hosts less to worry about than they might have done.

Moore’s struggles to provide quality hold-up play also restricted Bale and James from advancing to support him and join attacks. They did have outlets in wider areas upon regains, however, when James and Bale looked to attack their opposing full-backs one-on-one. While this allowed them to penetrate into the final third, the hosts never really threatened to add to Bale’s first-half goal and must now win their final two qualifiers to retain hopes of making Euro 2020.

Croatia were set up by their manager Zlatko Dalic into a 4-2-3-1 formation, featuring the talented double pivot of Luka Modric and Mateo Kovacic. Much of their early play came across their back line, or between their defence and that double pivot. Wales began with a well-organised mid-block, so spaces between the lines were limited; the visitors also lacked support around second balls.

It was with a quick, direct counter-attack after spaces had opened up that Croatia took the lead. Modric and Kovacic soon adopted wider positions because of their struggles to progress through central midfield; their full-backs also moved inside as the Wales midfield’s focus on Modric and Kovacic contributed left more space there. Wide midfielders Ivan Perisic and Josip Brekalo moved deeper and towards possession.

Without the ball, Croatia adopted a 4-4-2 mid-block. Nikola Vlasic, who started as a number 10 in possession, advanced to join lone striker Bruno Petkovic in the final third. When Vlasic followed Joe Allen, spaces were created for Wales to feed individuals beyond the visitors’ double pivot, but secondary defensive movements around the ball frustrated the hosts’ attempts to attack. Kovacic soon assumed responsibility for Allen, meanwhile.

Modric and Kovacic again adopted more narrow positions during the first phase of their build-ups. This meant Croatia’s attacking possession was limited and, ultimately, Dalic’s team struggled to find advanced players or get support up alongside Petkovic. They eventually conceded an equaliser when Ben Davies too easily penetrated their mid-block with a run from left-back.

Petkovic was later replaced by Ante Rebic, whose more direct movements in behind, combined with the wingers drifting inside to recreate Petkovic’s movements, reduced their options out wide and enhanced Wales’ ability to transition into attack. In the end, however, the hosts failed to offer a consistent threat and Croatia secured the point that makes them strong favourites to top the group.